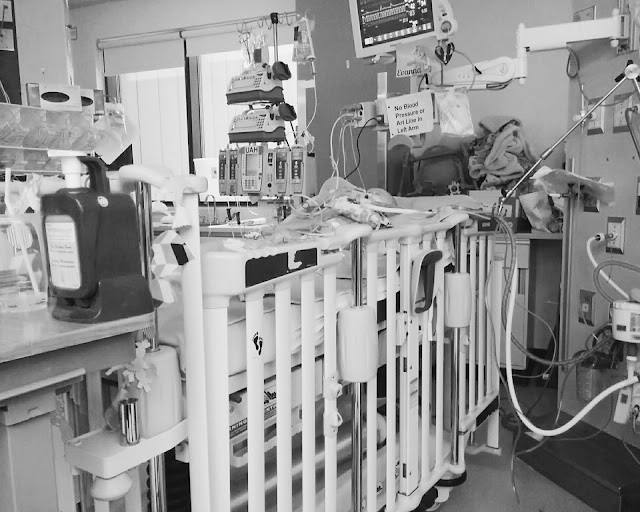 So surgery went extremely well, and I'm just blown away with what was done. Around noon, Dr. Rebeyka came out of the OR and said that everything went very well, and that he was very happy with the results. He said he was able to switch out her conduit for a smaller and shorter one, and that he also inserted a mechanical valve (which means she'll need to be on blood thinners from now on). As well, Dr. Rebeyka said that he had direct access to Evanna's trachea, so he fixed some things around there too. Apparently Evanna's body reacted to the mesh that had been placed between the conduit and her sternum during her first open heart surgery, and so there was some build up of tissue. So Dr. Rebeyka cleared all of that up, as well as some thymus tissue that was attached to her trachea. He then sutured her aorta and conduit anteriorly from the trachea (in laymen terms, he lifted her conduit and aorta off of her trachea),and while doing this, Dr. Eksteen (our ENT) looked down her airway via bronchoscopy. The whole medical team was incredibly surprised with how much more open her trachea was after all of that. Now, Dr. Rebeyka did state that he would be surprised if Evanna didn't extubate, but he also said this last time, so I guess we'll just have to wait and see (he's an INCREDIBLE and AMAZING surgeon, but excuse my caution after 6 failed extubations). We're just going to take it one day at a time, and it will be what it will be, and we'll accept whatever happens.

Since surgery we've been dealing with some pain issues, and trying to get that under control - but what else is new? The first 24 hours after surgery have always been incredibly tricky with Evanna, so hopefully they can get that fixed as soon as possible, and get on the road to recovery.

I know I keep saying this, but I would like to thank everyone for their incredible support, love and prayers. We feel incredibly blessed to have you guys behind us, and cheering Evanna on. I can't wait until Evanna grows up - so then I can show and tell her how much she is loved and cared for.