OUT OF PICU – FINALLY! 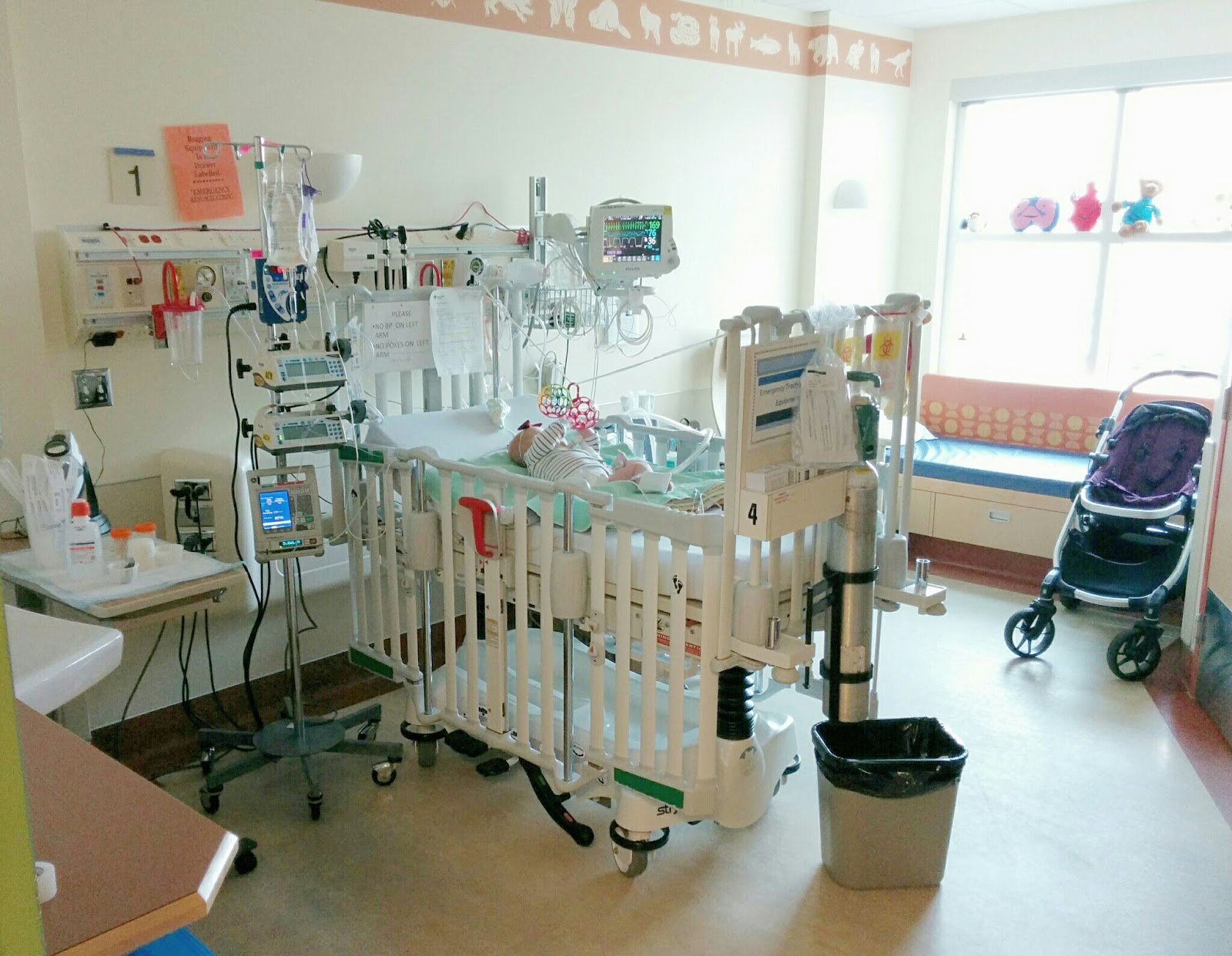 WE ARE OFFICIALLY OUT OF THE ICU! I just can't believe I'm finally writing those words, so I'm going to say them again – after 323 days, we are finally out of the PICU!

I remember thinking back in October, just after Evanna's first open heart surgery, that it would only be a matter of days, but days turned into weeks, and weeks turned into months (almost 11 months to be exact). It's why the beginning of this journey was so excruciatingly hard – we had prepared ourselves for the "normal" open heart surgery recovery time with maybe a bump or two, but not major setback after setback, and heartache after heartache. Slowly overtime this started to become our new normal, so setbacks weren't as devastating (well except Canada Day's episode) and we learned to just roll with it. While I'm still a social person this process has somewhat effected me – I eventually found myself not wanting to meet and talk to other families, and while I'm public about our journey, I became more private within the walls of the hospital. I couldn't relate to "heart families" anymore because within days and weeks of meeting them, they would soon transfer out of the ICU, go up to the floor and be discharged home while we yet remained. Don't get me wrong, I still have built relationships along the way, but I guess I kind of become somewhat "picky" – as its been a way to kind of protect myself.

Originally we were going to transfer last Monday, but our primary intentivist asked if we would be okay to spend another week in the ICU just to be on the safe side, and we agreed that it was a great idea. We decided to restart Evanna on a tiny bit of Methadone last Tuesday and give her another week before trying again to wean her off again.
On Wednesday we had a huge multidisciplinary meeting to discuss our impending transfer to Unit 2 – and including Nick and myself, there were about 12 people in that room. It was a really good meeting where we went over Evanna's history and our current problem list from head to toe. It was also confirmed that while transferring out of the ICU is a major step forward, we'll most likely hit our 1 yr mark in the hospital on October 6th, and unfortunately we're looking at a discharge closer to Christmas at this time . We were also heavily warned that with babies like Evanna and all her complex issues, that it's a huge possibility that we could bounce back to the PICU. The floors tolerance level for "misbehaving" is extremely low, and if there is suspicion that Evanna is starting to deteriorate in any way, a trip back to the ICU will happen immediately. It DID take us 4 transfers back to Calgary for one to finally stick (and we almost ended back up in Edmonton after her Septic Shock episode on Canada Day), so we have definitely come to terms that a transfer back to the ICU could definitely happen.

Over the weekend Evanna's PICC line had to come out due to the fact that it was causing more problems then necessary, as well it had the potential to cause a lot more problems if we didn't remove it. Evanna is still on quite the antibiotic & antifungal treatment plan until September 3rd, so they put in another IV in her foot, and we're just praying that it holds on until then. If it does come out and they can't get another IV after 3 pokes, the medical team and Infectious Disease has come up with a plan to switch to oral antibiotics, but they would rather stick to the IV medications for their effectiveness.
Evanna also got slightly fluid overloaded over the past week, and it reflected in her ventilation and how well her oxygen saturations were. She's been getting some extra fluid with all the antibiotics she's on as well as a saline infusion to keep the IV working, and she's not peeing enough to stay neutral. They decided to give some of her oral lasik doses IV and and even an extra dose last night, which seem to have helped. During rounds this morning they decided that while Evanna was on all these extra medications, to slightly increase her lasik dose and revisit weaning her off it when this treatment plan is complete. 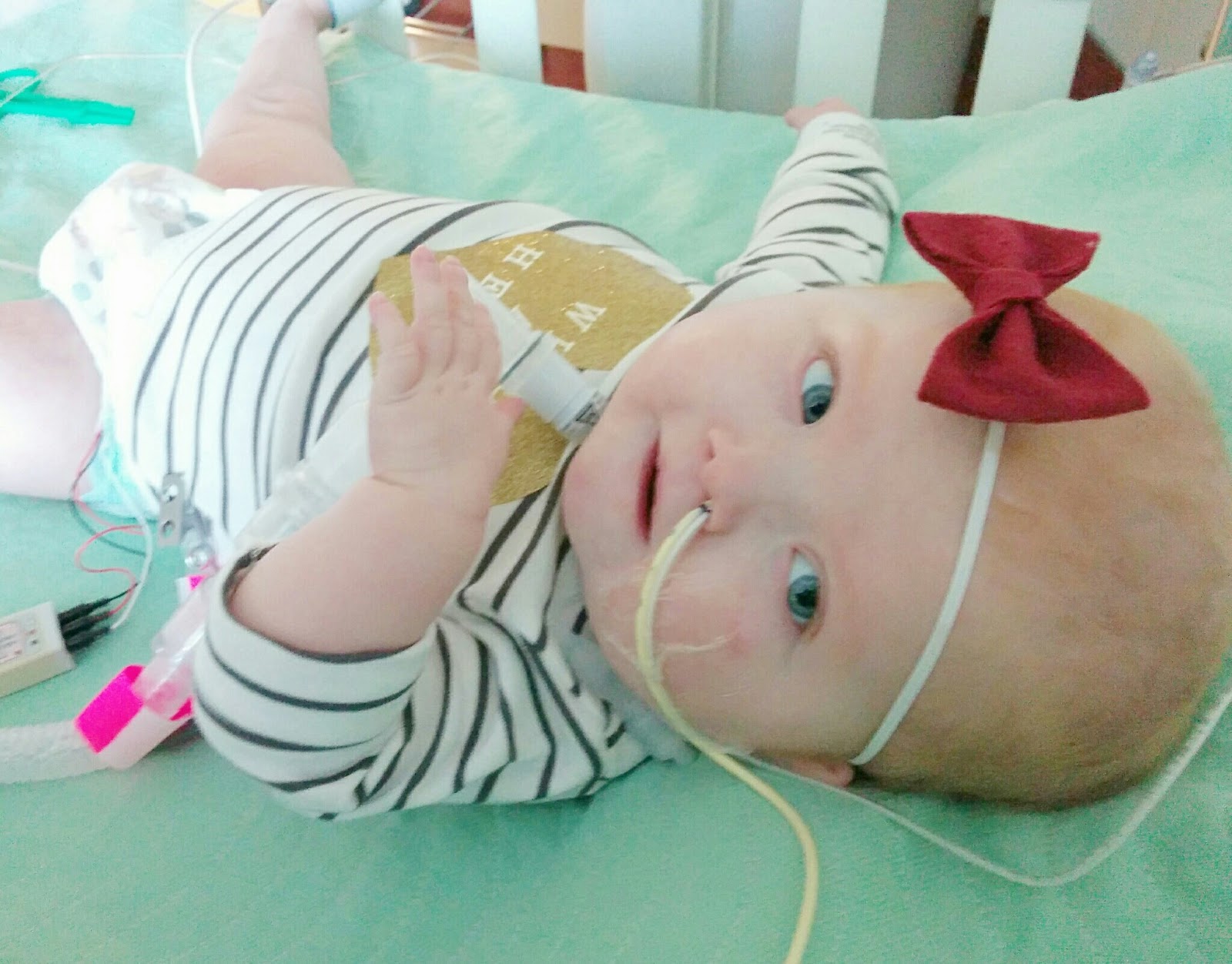 So today – they rounded on Evanna early this morning with both the ICU team and the "purple team" from Unit 2, and after going over some las minute items we got the all clear for the transfer. The pediatrician (we won't be dealing with "intentivists" anymore – which going to be SO WEIRD!) said the room is all ready to go and probably a noon transfer will be best for both the PICU and Unit 2. Finally around 1pm we packed everything up and walked upstairs with the "STEP team" who will be following us for the next several days. Normally they only follow kids for about 24hrs, but given our prolonged PICU stay, they will triple that number. We were lead down the "Yellow/Vent" hallway that they have set up for kids like Evanna, and let us settle in. Within 30 minutes the pediatrician came and asked if we would join him for a meeting and left Evanna in the care of her nurse. While we will no longer receive the one-to-one care we got in the PICU, we will still get two-to-one care compared to the three-to-one or even four-to-one care the rest of the unit has.
The meeting was to just rehash out everything we already knew, but interestingly we learned what will REALLY get us home. While we have a few minor things that we need to work on, our biggest hurdle will be getting Evanna's "cuff" down. You see, Evanna's trach is a "cuffed trach", meaning there is a balloon filled with water that kind of acts like a seal. While I don't feel like getting into all the reasons of why they don't want Evanna going home with a cuff, I will say that I can definitely see why it's going to take a while for us to get discharged. She's on extremely high settings and the cuff ensures that it she's directly getting all of that support. The plan is to kind of work on a bunch of little things over the next month (and get her stronger), but maybe in about 4 weeks, make a mini trip back to the PICU, deflate the cuff and maybe upsize her trach to see if we can get her to a "regular trach".

Overall, we're just going to take it one day at a time, especially this first week while we get settled into our new "home".
Continued prayers while we make make this huge transition and thanks for keeping Evanna in your thoughts and following our journey.