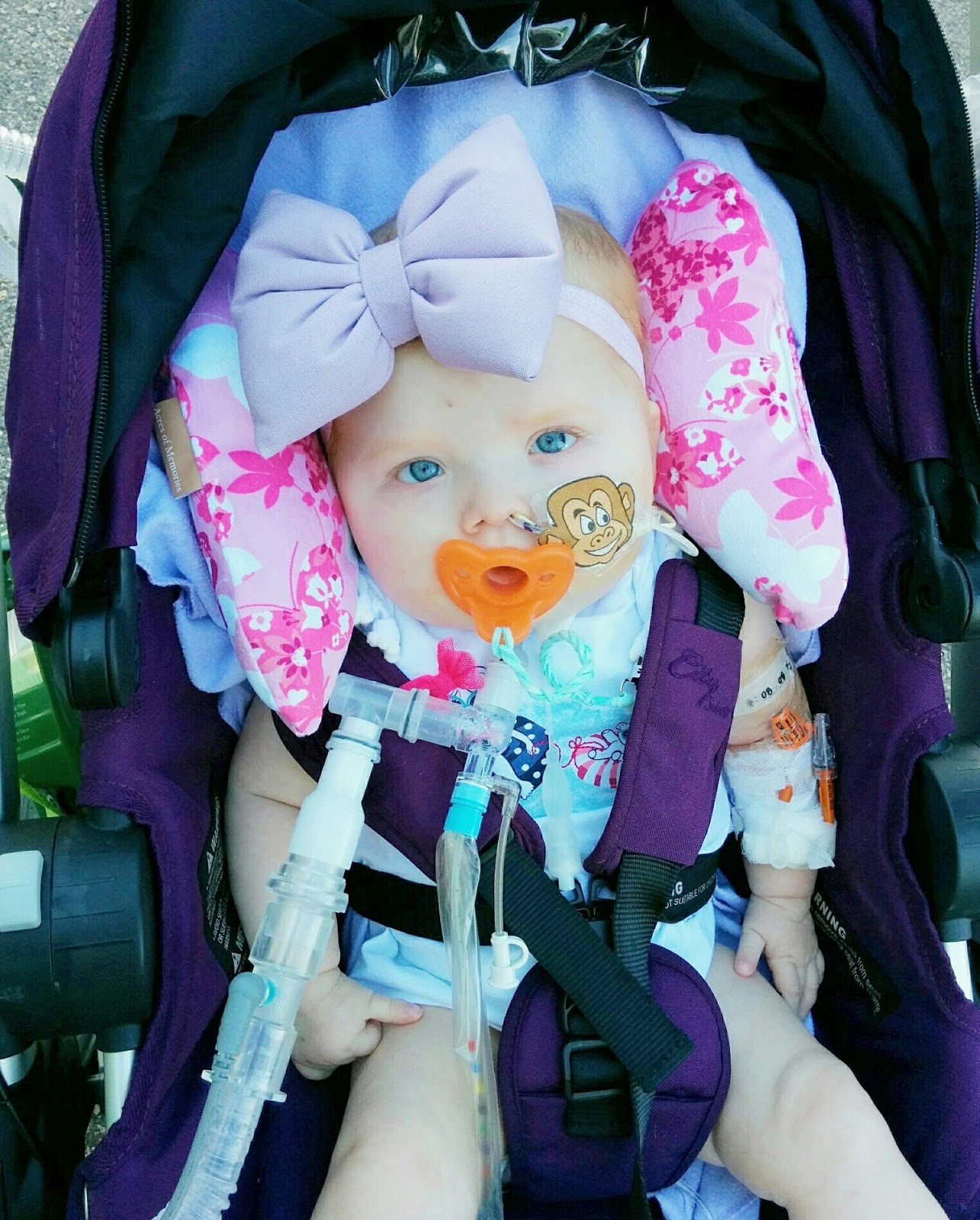 Why HELLO neglected blog! I’ve finally begun to take my laptop to the hospital to get caught up and STAY caught up. I wasn’t planning on bringing my computer to the hospital until Evanna got up to the floor (ie. out of the ICU), but it looks like I’m going to have to do it a week or two earlier than I anticipated. Anyways ….

I truly hope the saying "slow and steady wins the race" is an accurate statement. While Evanna has made progress in a some areas, there have been other things that we've decided to hit the pause button on and put off until she's even more stable.
In true Evanna fashion, a few weeks ago she continued to spike temperatures and have days were she was tachycardiac (high heart rate), so Infectious Disease and our medical team decided to keep Evanna on a good course of antibiotics and her antifungal for an extended amount of time – like until the beginning of September! We had a little scare on over the August lone weekend (what is it with Evanna and the holidays!?!) that put our intentivists and medical team into a state of Déjà vu from Canada Day, but with a timeout on the cooling blanket (to help bring down her temperature and heartrate), Evanna came around.

On Monday (July 27), Evanna had a quick little trip to the OR for a new PICC line. While it took them a little longer to place then we had anticipated, the procedure still went well and was an overall success. We also tried to restart NG feeds soon after, but due to "poop issues", we ended up going back to NJ feeding. While we know her stomach can handle food, when her bowels got backed up, it didn't want to absorb the food and she would just end up vomiting – so instead of administrating food into her stomach, they are being delivered into her intestines via an NJ. We talked with our primary intentivist Dr. Parsons, and together we all agreed that getting Evanna onto her home vent successfully needed to be the priority over her feeding. This means that while we are going to continue working on oral stimulation (mouth care, small chew toys, and her soother), we are just going to hold off on working towards bottle feeding for a few more weeks. We did agree to involve OT to start giving her mouth “tastes” of formula, but that’s about it.

So with transitioning Evanna onto her home vent becoming our main priority, the RT team set out a schedule to do trials on the home vent and then give her breaks on the hospital ventilator. It started out with just one hour, then two hours, then 2 two hours, then 2 four hour trials, and then finally leave her on the home vent during the day. After displaying stability on her home vent during the day, they finally decided to put her on the home vent and leave her on for good. While Nick and I weren’t that surprised at how smoothly she transitioned over to her home vent (because she was on for an extended amount of time up in Edmonton before our transfer), the Calgary medical team was extremely happy and pleased with Evanna and how well it all went. During all of this we began to wean her Methadone (after successfully discontinuing her Ativan last month), and we went as slow as we could. Evanna got her last dose of Methadone on Friday (August 14), but she ended up getting a PRN dose of Methadone yesterday due to some nasty withdrawals.

Probably one of our biggest milestones was taking Evanna for her first walk OUTSIDE and on her home ventilator on August 8th. When Evanna went for walks up in Edmonton, we stayed inside the hospital and she was still on the hospital ventilator (by the time she was on the home vent up in Edmonton, she caught rhinovirus and we were put on isolation, meaning walks around the hospital were no longer an option). Since then, whenever we have a good day we try our best to get Evanna out of the unit for a quick walk outside – even if it’s just for 20 minutes! The RT’s and nurses have stated they notice a positive change when we go for these walks – such has a happier demeanor and higher oxygen saturations. Speaking of Evanna’s demeanor – what a difference the last few weeks have been! After finally coming off of the Olanzapine (antipsychotic), and getting down to about 0.5mg of Methadone every 4 hours (she started at 1.0mg q4), we began to see our happy and smiley girl peak through. Every day that we came into the PICU, we would see more and more smiles from Evanna and it just brought us so much joy. Once we got down to extremely tiny doses over the past week, she would smile without us having to trying very hard, and she would also smile to every nurse, RT and doctor that walked into our room and they instantly became smitten by our little girl.

Finally we’ve been working pretty hard with Occupational and Physical Therapy to improve her skills. A few weeks ago, Evanna could barely hold onto a light rattle, but she now grips it very well and shakes it with delight. We’re trying really hard to get her to sit up, and while it seems like she’s taking forever, I know with time she’ll be strong enough to do it. The last 10 months have caused Evanna to become extremely weak and lose a lot of muscle tone, but we’re very confident that with all the drugs coming off, Evanna is going to just fly! Much to Nick’s dismay (he doesn’t want a “TV Baby”), we are using movies to distract Evanna while she’s sitting up to help distract her from the fact that she’s doing hard work. The trach and ventilator kind of complicate things (it’s an added weight and the tube gets in the way), but we’ve told that trach kids compensate and that we’ll be surprised at how well she’ll work around this obstacle and not let it stop her one bit.


So what’s ahead? Well now that Evanna is on her home ventilator full time and has proven stability, talks are definitely turning to transferring out of the ICU and onto the floor. At this point I don’t want to publicly state our intended goal (I have a habit of jinxing things), but I will say that it’ll be soon! She’s kind of at a point of not being acute enough for the ICU, but too acute for a regular unit. When Evanna goes up to the unit, she will be placed in a special hallway that’s for trach and vented kids, and she will receive two-to-one nursing care verse the regular three-to-one nursing care that the rest of the unit has. The RT’s from the ICU still come up and do their monitoring, but it will be less often, and overall more of Evanna’s care is placed on Nick and I (which we’re completely happy with, as it’s something we’ve often had to fight for here in the PICU). While they encourage Nick and I to go home at night and sleep in our own bed when Evanna is in the PICU, it’s somewhat expected that one of us stays with her during the night once she’s up on Unit 2 – so that’ll be an interesting adjustment. While the PICU is going to try their best to ensure a smooth transition, I’m fully expecting a few bumps as we get use to yet another new medical team. Hopefully they will listen and rely on Nick and me as they get to know Evanna and all of her quirks. We have also been heavily warned that while moving to Unit 2 will be a major step forward, to not be surprised if we end up back in the ICU once or twice on our journey towards home. Evanna is extremely complex, and the floors tolerance for babies like Evanna (trach and vent) is extremely low, and if Evanna shows the smallest sign of not doing well, we’ll be sent right back to the PICU. While I definitely hope it doesn’t happen, it took us FOUR transfers back to Calgary for one to finally stick, so I’m fully expecting to bounce around the hospital a few times before that too finally sticks. Evanna has her own timeline, and we unfortunately have to follow her cues.

Once Evanna is over these Methadone withdrawal episodes, we plan to start weaning her Chlonidine and restart NG feeds. Dr. Parsons has kind of put the NG feeding plan into our hands, and said to do whatever we want to do. We have been through many NG “transitions”, and have seen what has worked and what hasn’t, so he trusts us to know what’s best for Evanna with moving forward and has decided to give us some control. 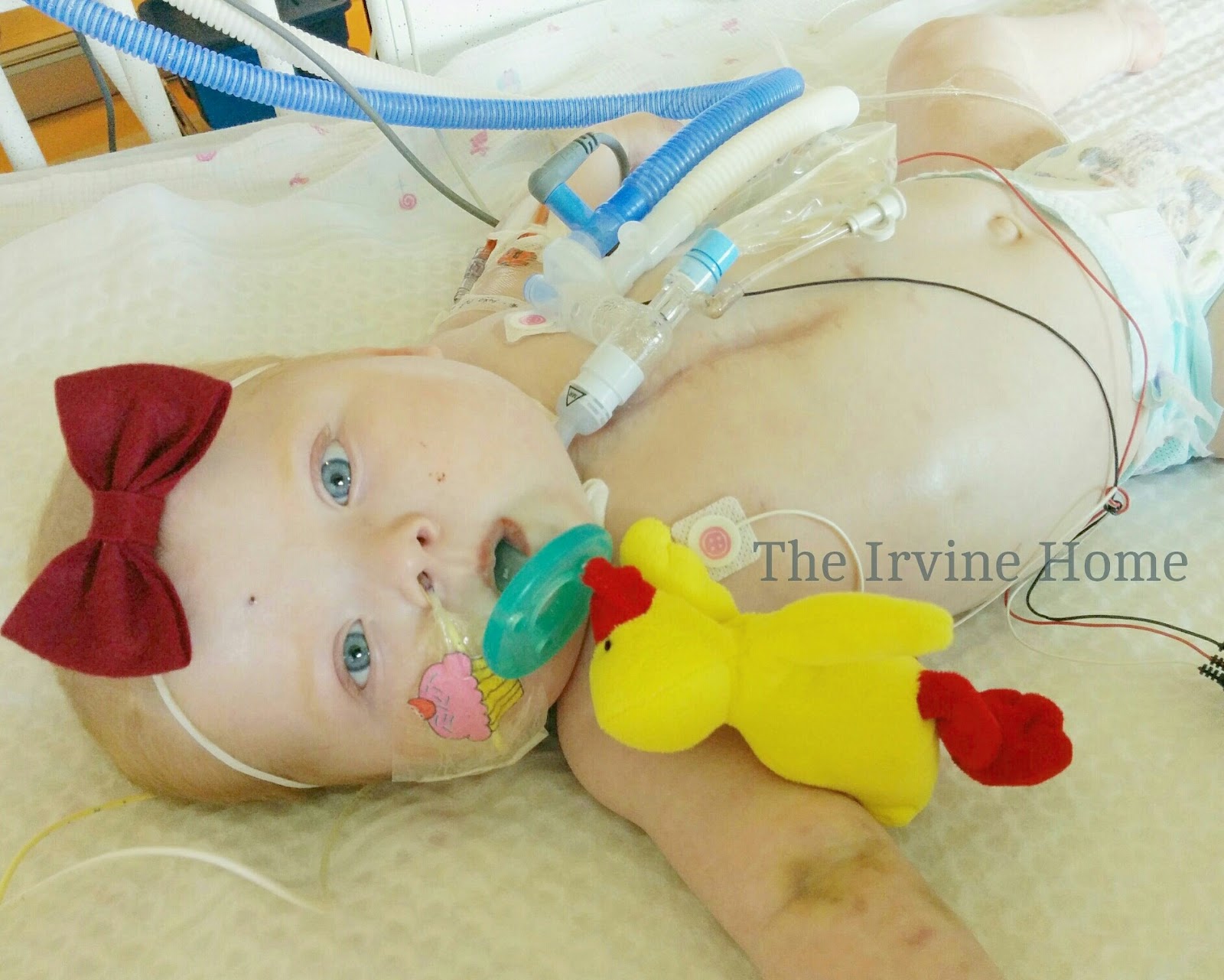 Lastly, Nick and I have begun to work on our “to-do” list of things we need to do in order to bring Evanna home. We’ve opted to do “self-managed care”, so there is a bit more work on our part up front, however we believe it will be the best option for our family. I applied for a business number last week (as we will technically now be employers), and we will be heading to the bank to open up a special bank account where AHS will allocate a certain amount of money to us (based on Evanna’s needs) to pay for nursing care. There are lots of checks and balances put in place (quarterly audits) to ensure the money is being used properly, and overall it’s going to be a huge adjustment. We will be heading to ikea next weekend to buy a few things for all of Evanna’s new accessories (a movable cart for her vent and suction machine, storage space for trach supplies and a comfy chair for the night nurses), and continue get our home ready for her homecoming. We have a few more things to get signed off on to be considered capable of caring for Evanna (though it’s been a tad annoying that because of our multiple transfers, we’ve had to prove some of the same things multiple times), and I’m hoping to do my CPR in the very near future. While we are much closer to discharge then we have ever been before, we still have many things to cross off our “to do” list, and I’m 98% sure we’ll hit the one year mark (October 6th) of being in the hospital. I’ve already come to terms with it, and instead of being sad about it, I’m trying to think of ways to celebrate and document this milestone.

Thanks so much for continuing to follow along, cheer on Evanna and our family and keeping her in your prayers! 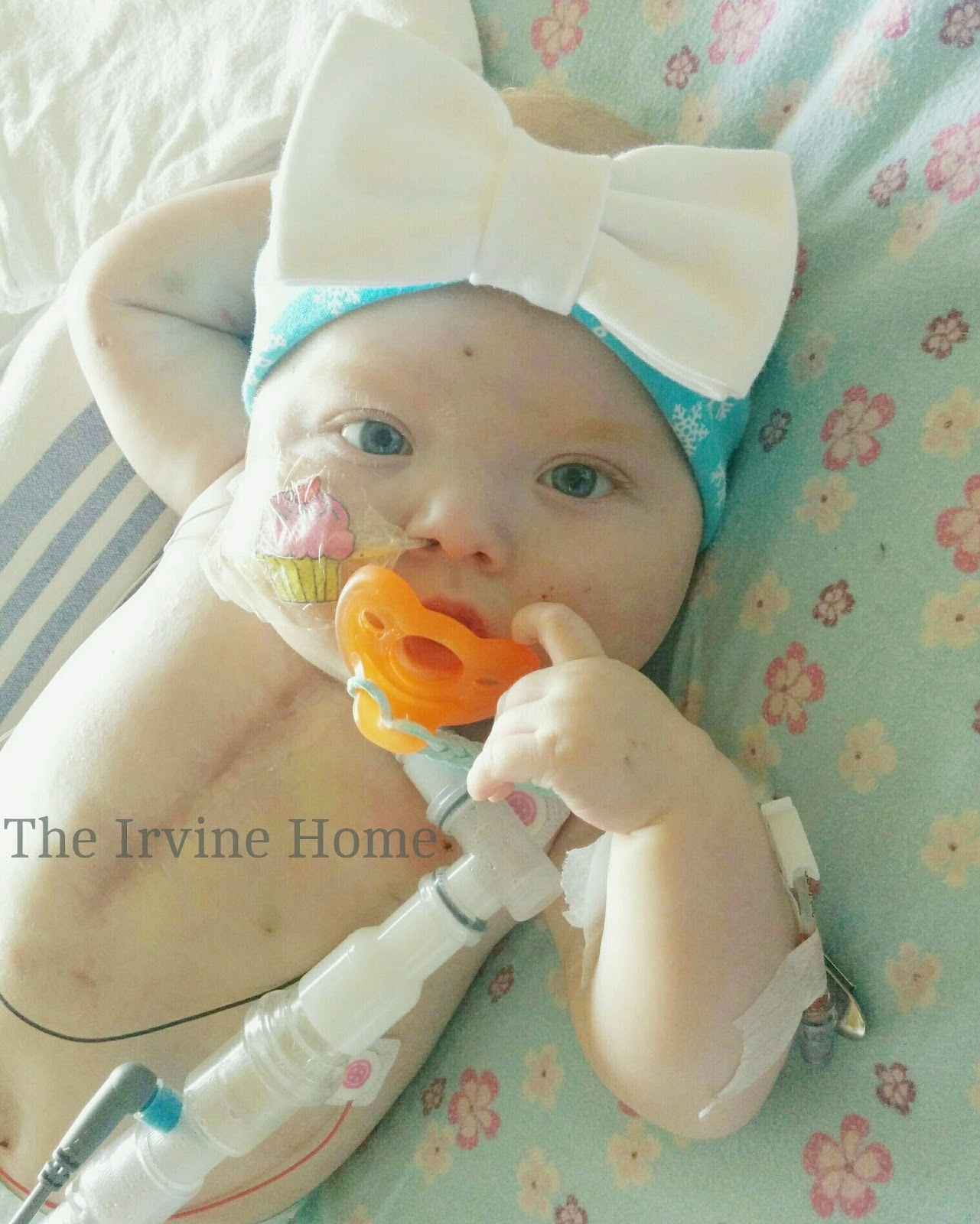 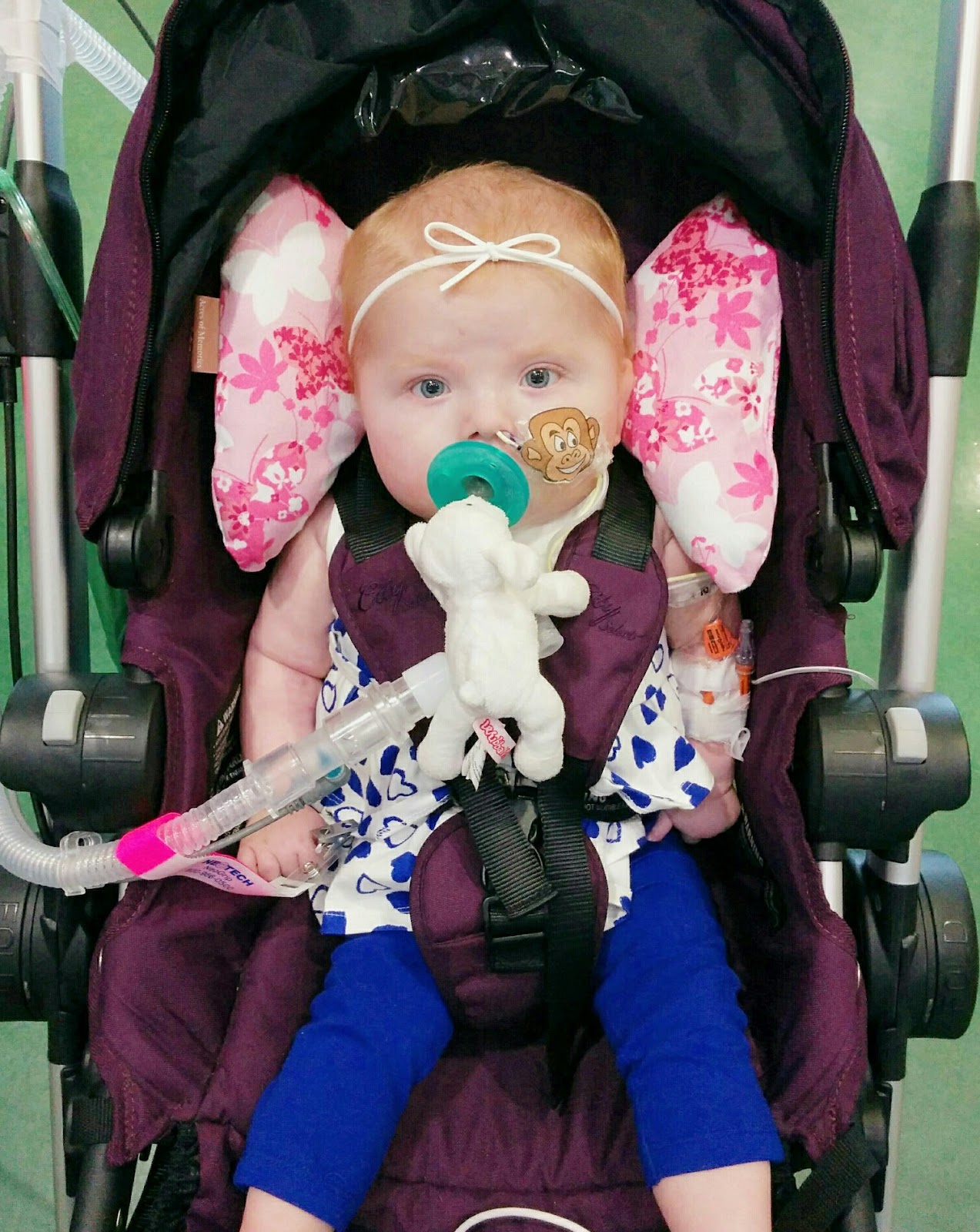 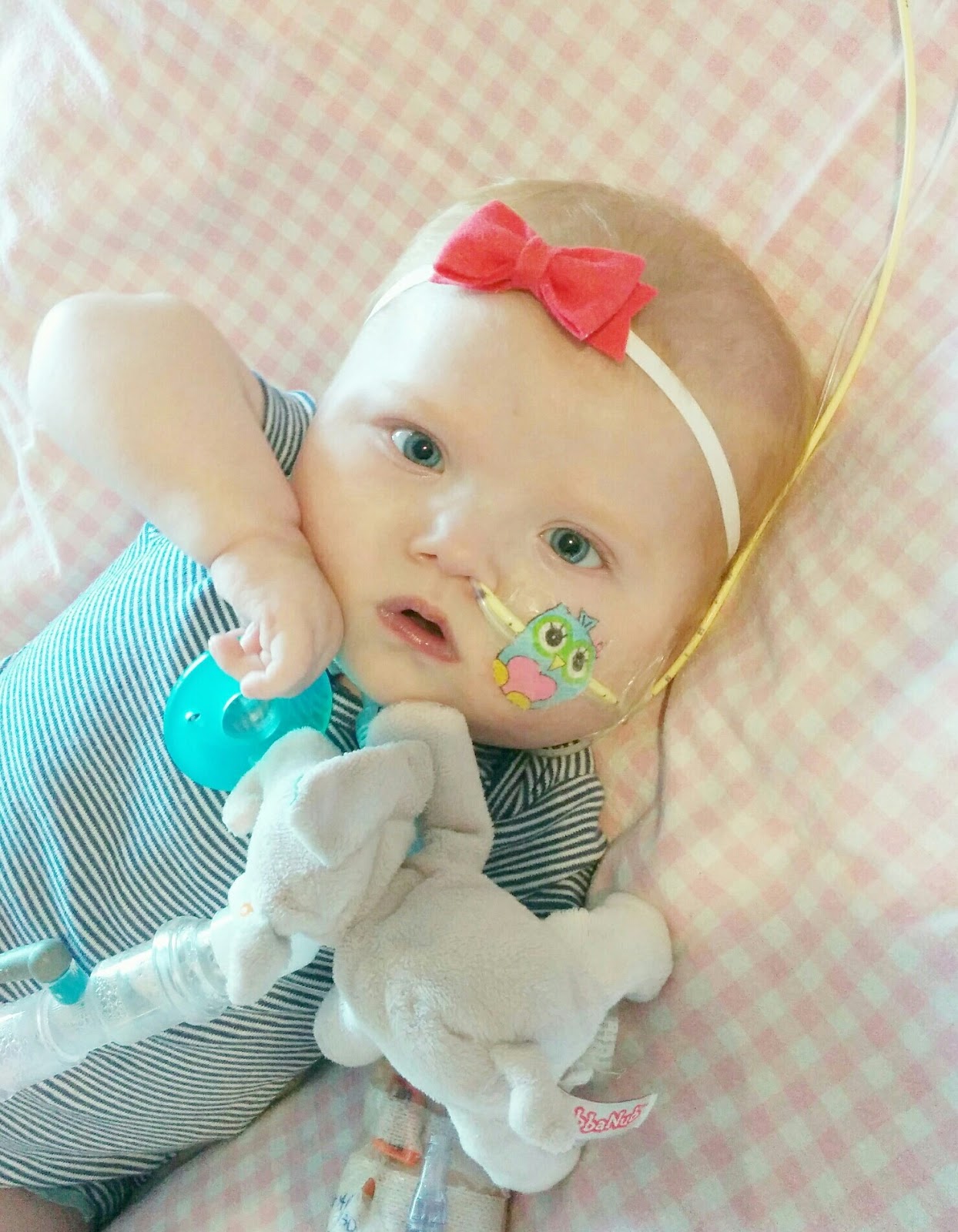 +     I've partnered with Baby Jack & Co as a "Kindness Rep" in their #spreadthelovey campaign. They make sensory blankets, and have created a way for YOU to purchase one, which will be donated to a family in the NICU/PCICU/PICU. The blankets purchased through THIS LINK (<<--- click there), will be shipped to me, and I in turn will pass them along to families here at the Stollery Children's Hospital. My personal goal is about 50 blankets (between the 3 ICU's here at the Stollery, there are about 40 beds), but I need YOUR help to get me there! Currently I'm at about 40% for my goal, so please let me know if you have any questions, as I would be happy to answer them! {Also remember: Enter code KIND to offset the pre-set shipping on the website. No matter what shipping info you enter, it will be shipped to the donation recipient (me) in 1 bulk shipment}