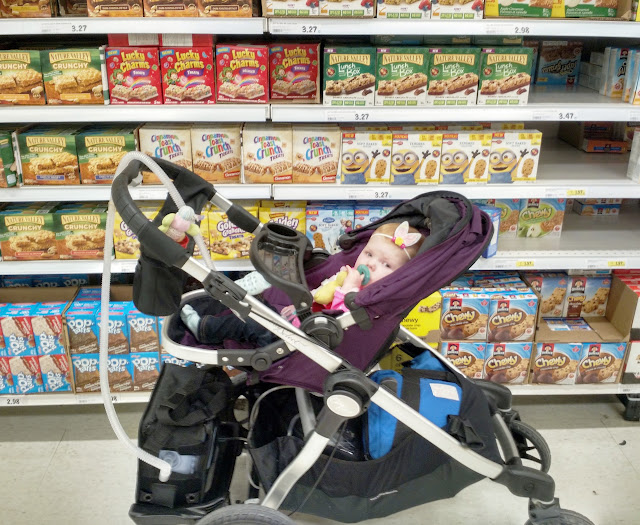 While this picture captures what looks like an everyday "normal" situation (taking your baby to the grocery store), this outting was an incredibly big deal to me – in fact, I would go as far as to call it a personal milestone. From the moment a trach was "put on the table", I immediately began to think about all the ways it was going to impact our everyday life and how things would change for Nick and I. Simple mundane things, such as going to get groceries with your child in tow was going to dramatically change, and that idea frustrated and even infuriated me. For months I prayed so hard that Evanna would recover from her open heart surgery so we could return to a somewhat "normal" life, but every failed extubation continued to rub it in my face the fact that normalcy was getting further and further from my grasp, and the life we knew would no longer exist.

Not only was it just the logistics of "going to the grocery store" going to change (it currently takes two people and a lot of coordination to load Evanna in our vehicle with her heavy home ventilator & large oxygen tank attached to her), but I was scared of what we would encounter being out in public. Up til now, our outings have remained exclusive to hospital appointments (where we blend in among many other medical families), doctor appointments, church (where everyone knows us and our journey), and our parents houses. We live in a world that is ruled by materialism and looks, and people sometimes can lash out and act inappropriately to unfamiliar situations and the unknown. Overall, I wad scared (and still am) to hear the question "what's wrong with your baby?".

You may think I'm slightly overreacting, but I'm apart of several medical mama Facebook groups, and stories of those outings where people point, stare & make mean comments do exist, and unfortunately I don't have the thickest skin in the world. I have gotten pretty good at learning to advocate and be my daughters voice over the past few years, and I absolutely love sharing our journey, because after all – it's one heck of a story! But online is different from real life. Online, I'm able to take the time to explain things and write out "synopses" to people who comment or send me a message. However, in real life, I feel like I may not get that opportunity or time to do that out while in public (I know I don't owe people explanations...but that's just my nature), and it's something I personally struggle with.

So...how did our first trip to the grocery store go?? I'm pleased to admit that maybe I built it up a bit too much in my head, and that it went pretty darn well. Evanna was loving the change of scenery, and generally people were so focused on what they were doing to even notice a stroller with an oxygen tank & ventilator strapped to it going up and down the aisles lol. In fact, it wasn't until Nick was at the checkout that a girl walked past us and asked "is that some type of CPAP machine?". She ended up being a nurse who works in the NICU at RGH (so that's why she noticed the breathing machine/ventilator in the first place), and was incredibly nice and asked a few questions and thought Evanna was the cutest thing. Overall, it was a great first trip out in public, and I'm excited to see what other adventures we take Evanna on now that summer is around the corner ❤