April is off to a fantastic start – and I really hope this is the beginning of a positive trend! I'm over the whole “when it rains – it pours” bit that we’ve been enduring for quite some time, and so I'm really looking forward to how the rest of this year will continue unfold.

Of course I’m currently referring to our mini ICU admission and fantastic bronchoscopy results that took place a few weeks ago – but I can’t emphasize enough how this procedure, and the results that followed were such a huge deal! Because my social media updates on Instagram and  Facebook were pretty detailed and thorough, I’m going to save myself a little bit of time and just copy + paste them here – – 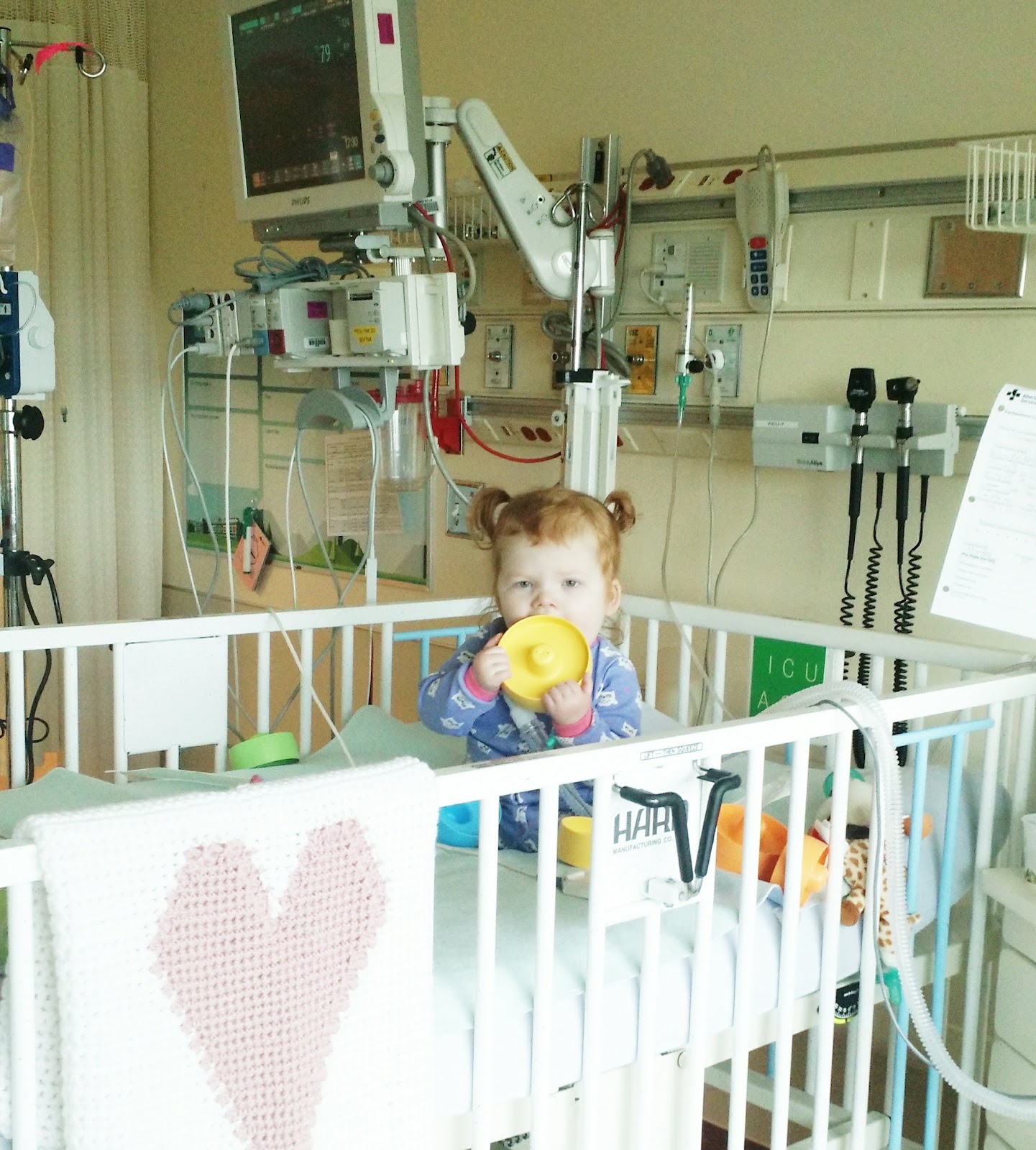 BRONCHOSCOPY RESULTS || so the bronchoscopy results are even better than I had anticipated (partially because I was too afraid to get my hopes up). We had the same Respirologist that did it last year – which was great for consistency purposes.

For the longest time, Evanna was on ventilator settings of “27/12”. The number “12” representing the level on PEEP (pressure) Evanna requires to help “stent open” her VERY floppy trachea. When someone undergoes a procedure and needs to be intubated – you can generally extubate a person successfully off the ventilator around a PEEP of 4-5.... so yes, Evanna required more than DOUBLE the amount of pressure to support her breaths (I can't emphasize enough how high that number is). In the OR, the Respirologist was able to go all the way down to a PEEP of 2 🎉🎉 I’m seriously in shock right now!! While there are still are a several steps to take before we start taking Evanna off the vent – this means we’re definitely headed in the right direction, and weaning off the ventilator and decannulating (taking the trach out) may be much closer than we thought!

At the moment Evanna is back in the ICU on her home ventilator with settings decreased to 20/8 (so the PEEP has been decreased from 12 to 8). Evanna's being monitored for 24 hrs... but we're not quite sure what the plan will be after that. They may discharge us tomorrow and have us hang around these settings for a few months before trying to wean again, or do another decrease or two in the morning. Due to the fact that this is the first massive decrease we've ever done since Evanna's trachoestomy, they may be reluctant to push much further right now, but we'll know more in tomorrow.
Thank you SO much for all the prayers today -- they were definitely heard, and I'm one super happy mama right now. 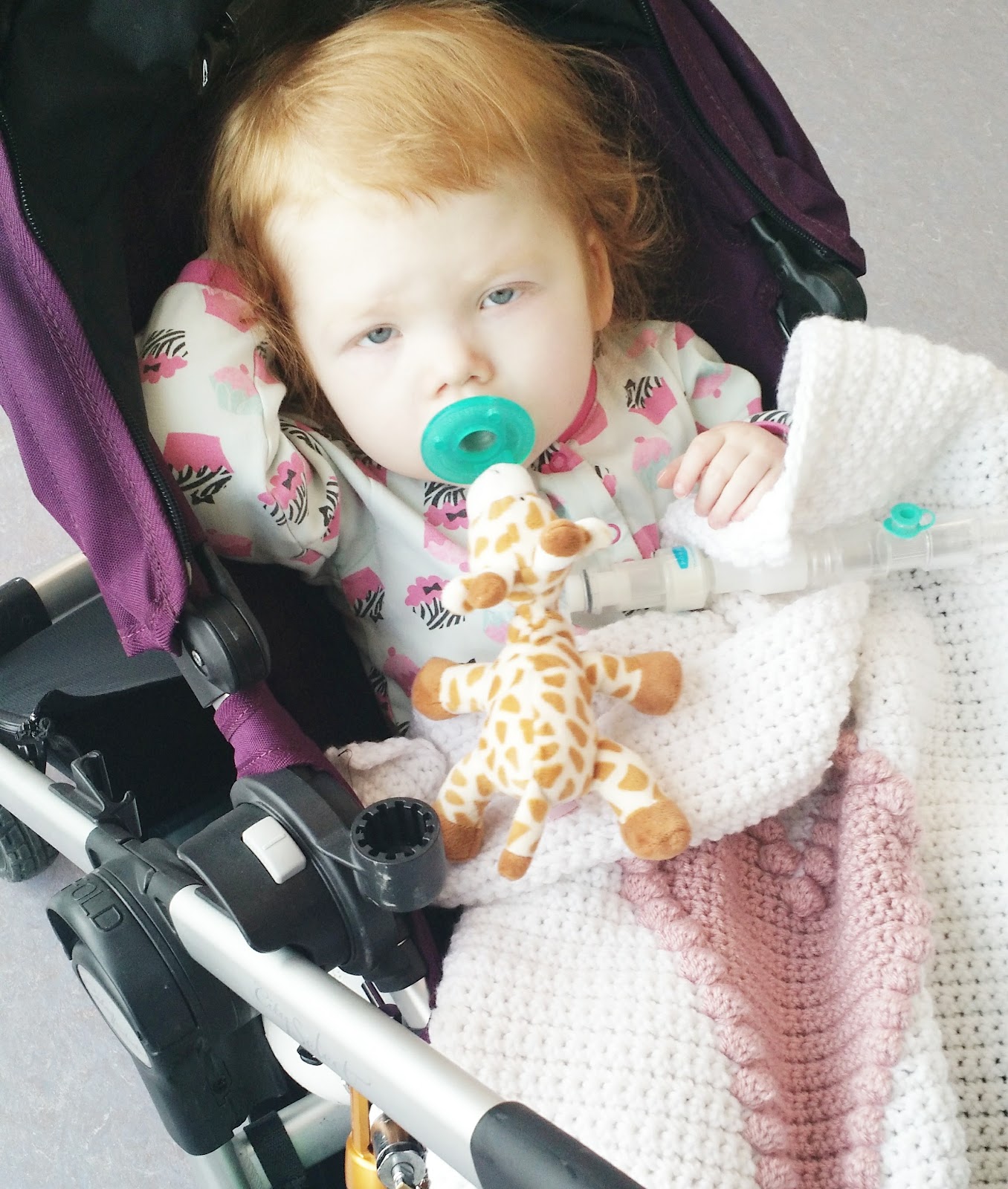 AND WE'RE DISCHARGED || by far our happiest ICU admission to date, and I'm seriously on  c l o u d  n i n e  right now. While the medical team was busy rounding on other patients this morning, the nurse practitioner came in after talking to the Respirologist on the phone and stated that everything seemed to be in order and we could immediately take Evanna home.


We actually ended up running into the Respirologist out in the parkade (it's actually the second time this has happened lol), and he reiterated how happy he was with Evanna's bronchoscopy results + revealed that he had actually sprinted her off the ventilator for an extended amount of time while in the OR and she handled it just beautifully. We'll now be seen back in clinic in about 4 wks and look at making additional decreases (though I'm not sure whether it'll be in the form of vent settings decreases or play with the idea of sprints off the vent). My head is spinning at how fast this is all of a sudden going – but we've been​ warned in the past that once Evanna was "ready", the process would gain momentum and changes will start to happen on a more consistent basis.

Since our discharge, things have actually been quite low key and don't have much more update on. The Stollery has called and confirmed that we're slated for an early June Cath date (*cue sigh*), and I will confirm that everything is in order at our next cardiology appointment that we have later this week.

Our next Complex Airway Clinic appointment has been scheduled for May 10th (which is just a few weeks away)! Unlike past CAC appointments that are generally for monitoring and check-up purposes only-- this will essentially be an "all day" thing (which I'm already mentally preparing for), as the respirology team plans to do more ventilator decreases! Hello #ventfreesummer (if I say enough, then it just has to happen, right?)!! At the moment, I don't know what those decreases will entail (ie. additional PEEP decreases or experimenting with some actual sprints off the ventilator), but I'm still excited nonetheless.... and based on how well she handled the first big decrease -- I'm confident she will do well and handle it just fine. We also plan to ask about a passy muir valve (aka "speaking valve")... which will help direct air through Evanna's vocal cords and hopefully help enhance the noises she's already making and have a chatty toddler in no time! We weren't able to entertain the idea before, as this valve actually adds PEEP, and due to how high her PEEP was before, were told we had to wait until some decreases we made before experimenting with one. Some kids don't like pussy muirs -- but we're still keen to try one and see what Evanna will do when we put it on her trach *fingers crossed*. 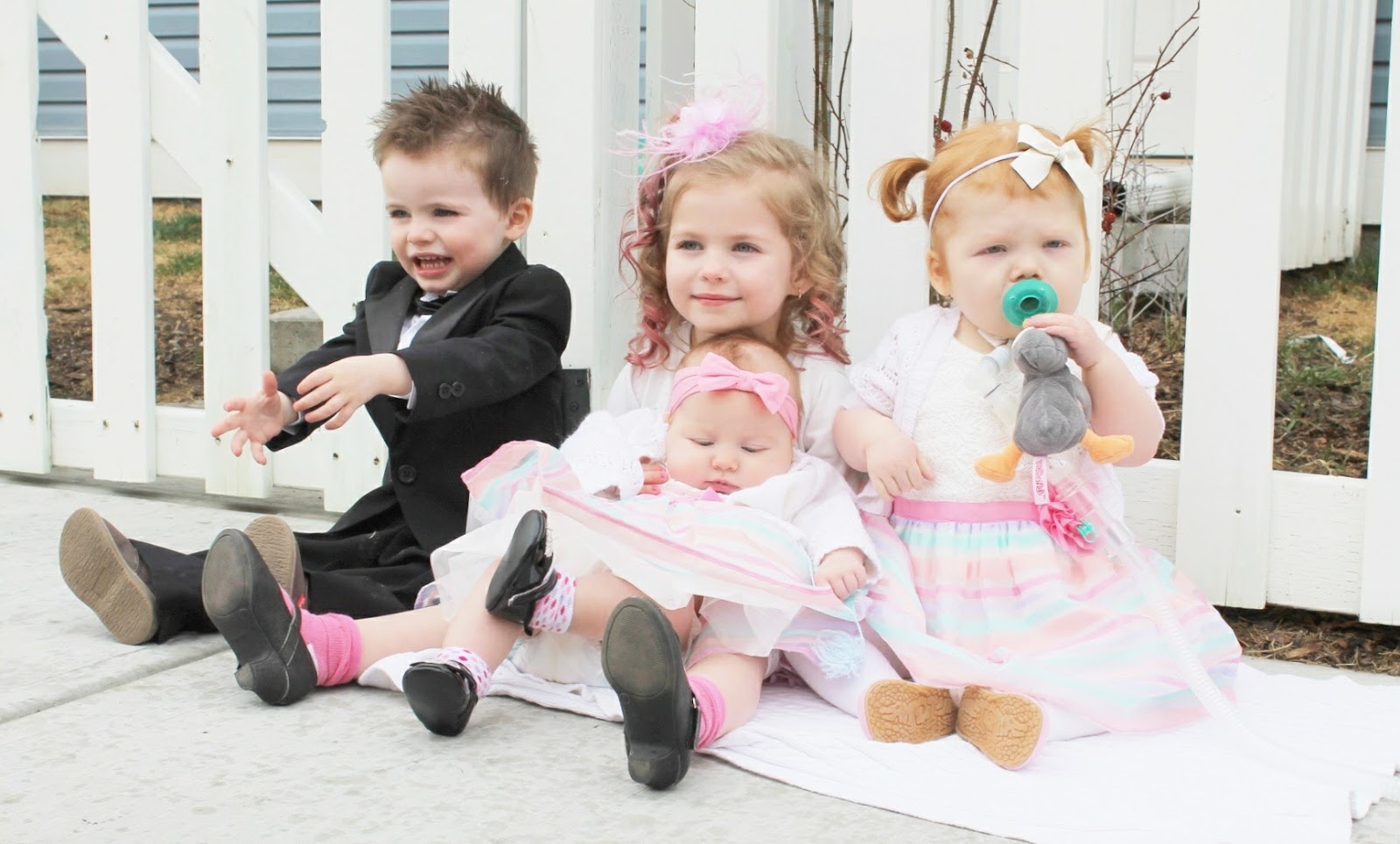 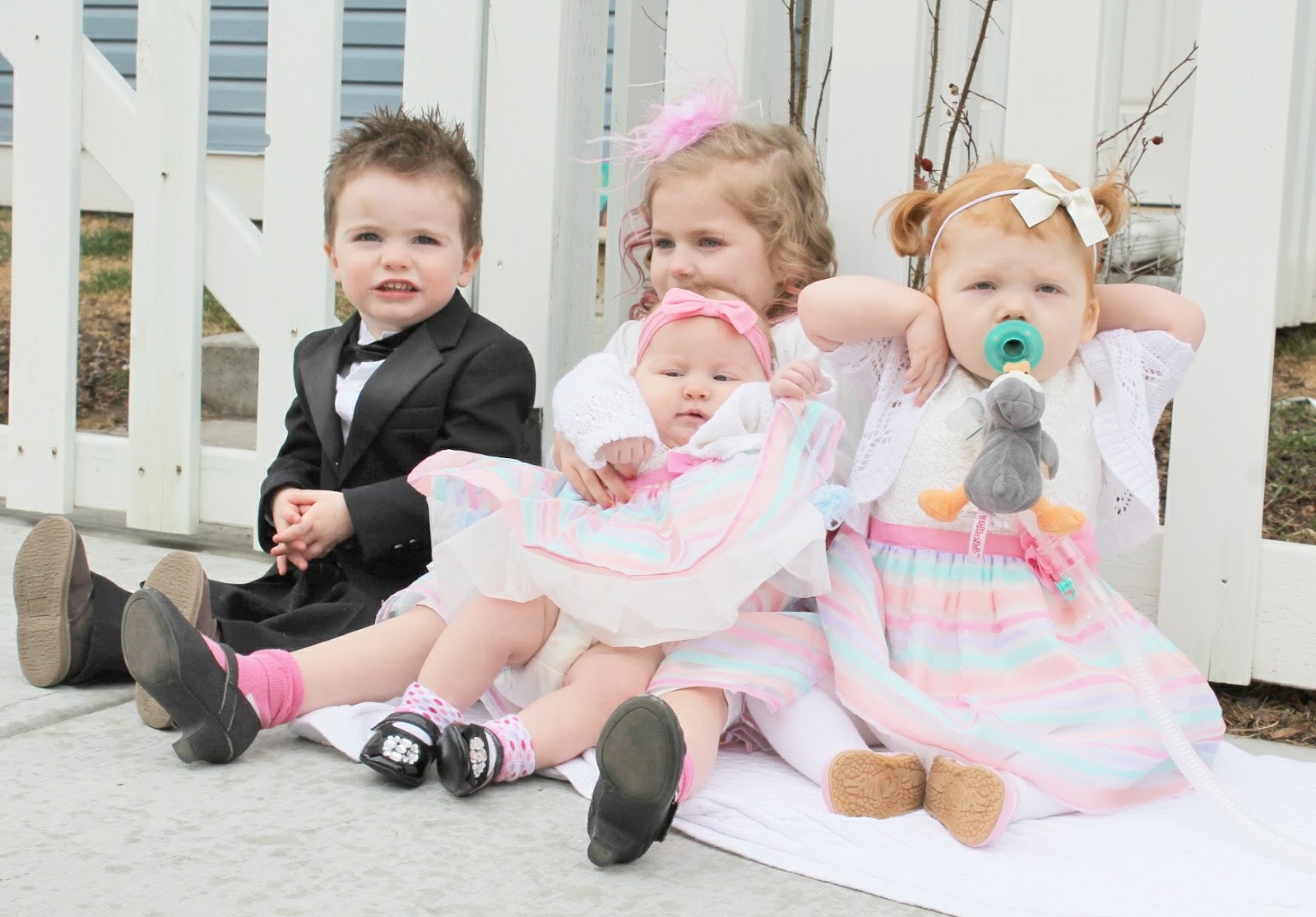 Easter has recently become an important time of year for me. It usually involves our anniversary and signals that Evanna's birthday is just around the corner. My sister and her husband recently moved to High River, and so because she wanted us to come see their new place, had asked if she could host Easter this year. So we drove out to High River on Saturday and had dinner with my family -- including my grandparents who drove up from Fort Macloed to join us. Before dinner, we quickly took some photos of the kids in their "Easter attire", and though it required a lot of patience and creativity to keep them all content and happy (especially Mr. Dax....), it was definitely a bit easier than the Christmas photos just a few months ago... so I'm going to call it a win lol.

/////// other little updates --
I've recently been able to encourage Evanna to walk along the couch ("furniture walking") if she wants to gain my attention. She's recently become a huge "mommy's girl" (Nick may be a little heartbroken over this new development lol), and so it's become a motivator for her to walk along the couch to get to me. Last Monday, nurse Carmen accidentally discovered that if you now hold Evanna under her armpits, she will take steps towards certain toys or her tablet. It's something Nick and I have tried to get her to do in the past, but I guess it wasn't something she was interested in doing until now.

These last two weeks of April have proven very busy which entailed a night out with friends this past Friday, another "trach mom night out" yesterday for me (we have a little local group of "trach moms" that try to get together about once a month for brunch or dinner), and Xoey's (our niece) baby blessing today! Evanna's 3rd birthday is next weekend, and my dad's 55th birthday the first weekend of May!

......AND before I forget, I was featured on another podcast (first podcast from 2016 is available here) back in February, and I've been meaning to link to it here on the blog for those who haven't had a chance to listen to it yet. CLICK HERE to hear our episode on Extraordinary Moms that I did in honor of CHD Awareness week where I talk about Evanna's journey and try my best to explain a "day in the life" of what it's like to be a "Trach and Vent" family!