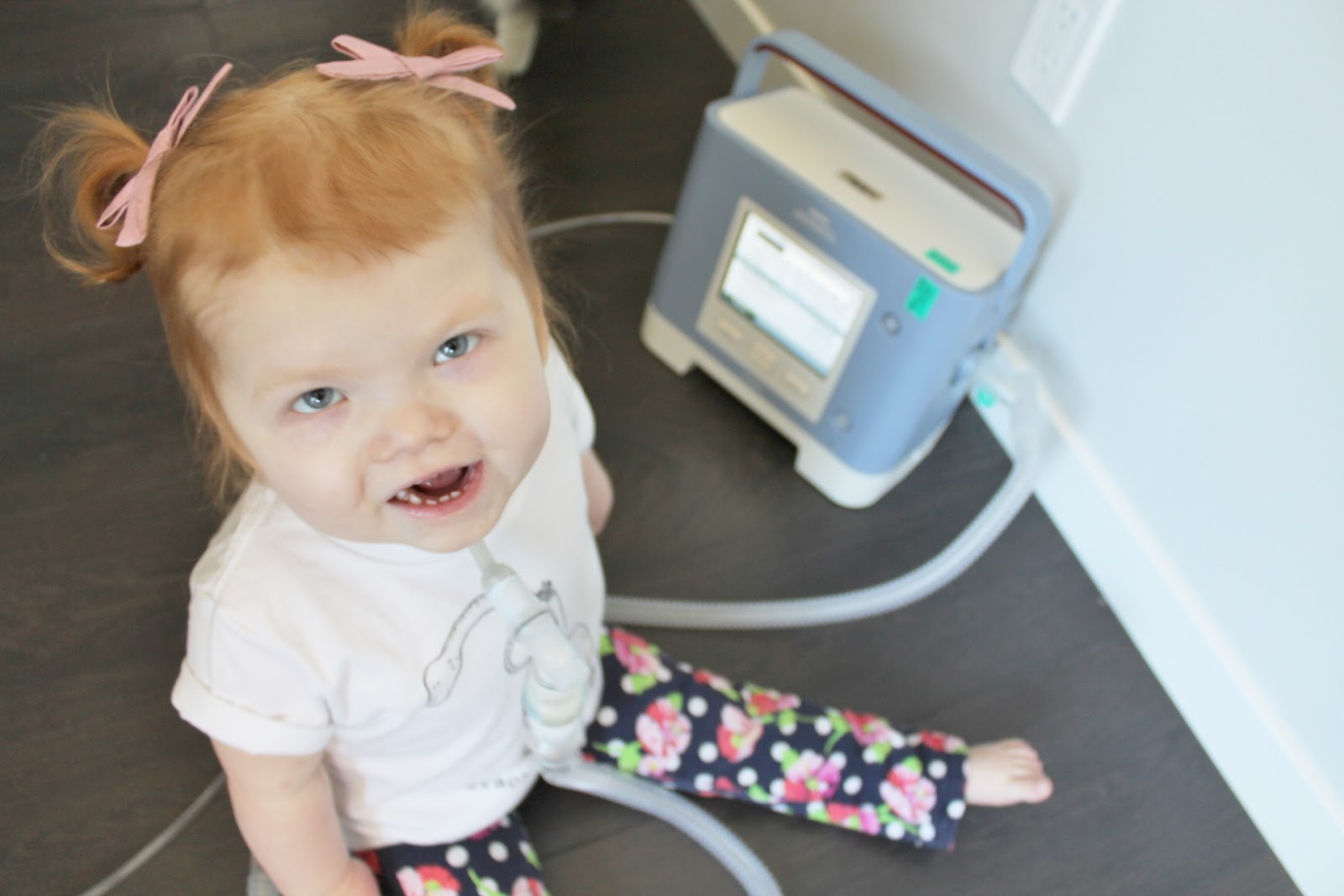 On the surface things have been relatively calm and even “serene”, but it has remained quite busy and somewhat “go-go-go” behind the scenes. Most of it involves getting some things in place for Evanna as we leave the first quarter of this year behind and make some plans for the rest of summer leading into fall.

In respect to Nick and I, we are currently just putting the “finishing touches” on our legal basement suite and will hopefully have an ad posted and the suite rented out before the end of April. This project has eaten up most of our free time over the past few months (especially for Nick, I can’t emphasize enough how hard he’s been working to complete this project), so it’ll be nice to finally have to time to focus on more personal projects such as building the rest of our fence and do some landscaping in May, and even tackle some interior design ideas that I’ve been dreaming up since the day we moved in. 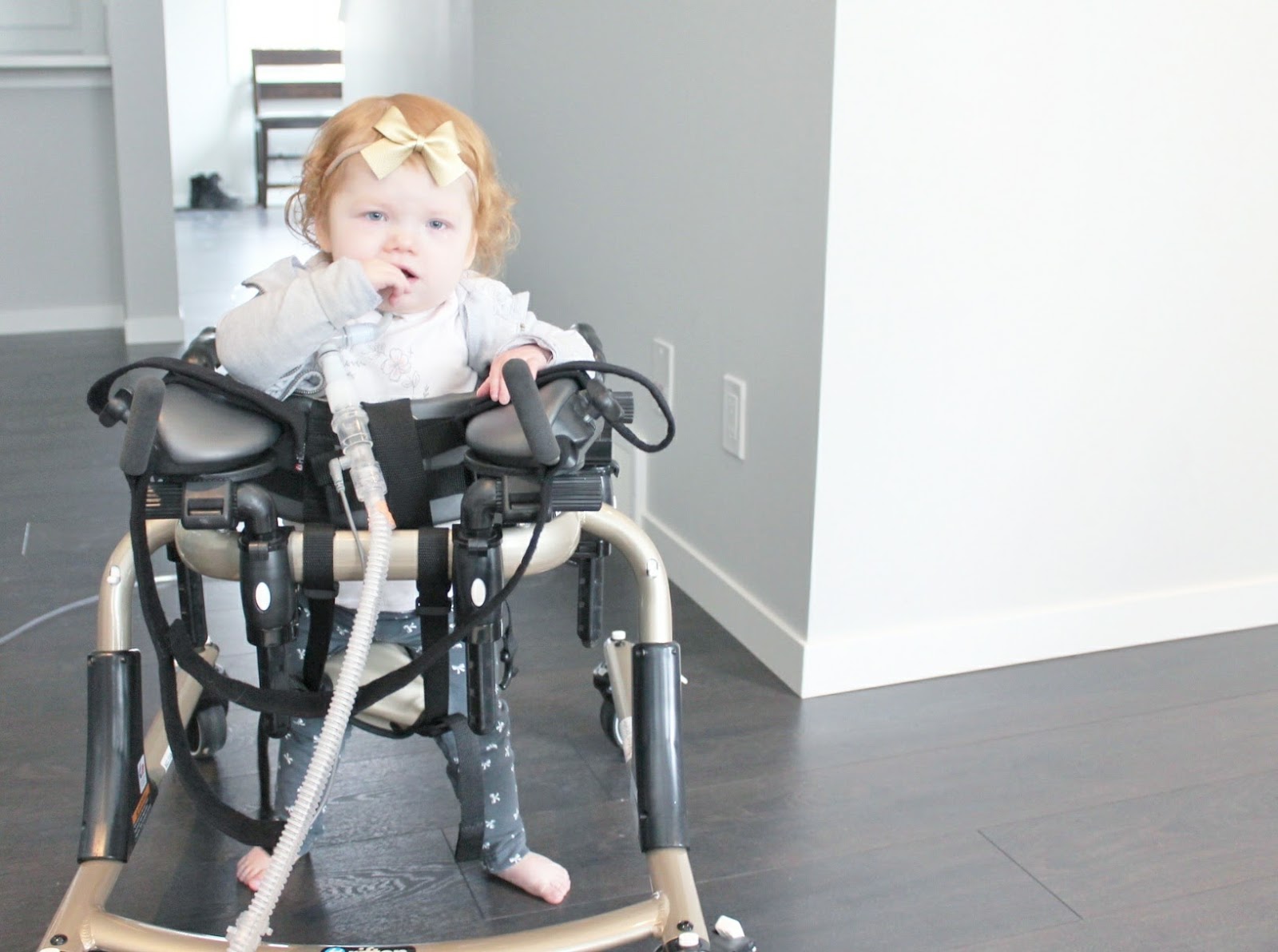 In regards to Evanna, we’ve been able to make a few small positive changes such as discontinue a few more medications in March and work on transitioning her from her standing frame to the walker. With medications, she’s on just iron, aspirin + Vitamin D – essentially all supplements and just quite an amazing feat in my opinion. The transition to the walker has been going okay, but I don’t think she quite understands the freedom it gives her and hasn’t realized the walker’s full potential…. but I’m confident in time that will come.
We also had an intake assessment with an organization here in Calgary called GRIT to send in Evanna’s application for PUF funding from the province that will provide early intervention services to help integrate Evanna into the school system over the next 3 years.

“Alberta Education provides Program Unit Funding (PUF) to support the educational needs of children with a severe developmental disability or delay. Children who are at least 2 ½ years of age and less than 6 years of age on September 1 are eligible. The funding is used to support children’s participation and learning in early childhood programs.”

Evanna qualifies for the full 3 years (the first year or two will definitely be home-based), and due to her age, will start this fall! I was a little apprehensive about the whole process and feel like Evanna is too young/not ready – but we’ve been reassured that Evanna is definitely ready and will benefit so much from this program. We chose to go with GRIT (as there are a few several organizations to choose from) based on all the favorable recommendations from fellow medical families that I am acquainted with and our primary trach nurse from the Complex Airway Clinic who noted that GRIT  was the most experience with medically complex kids – especially those with trachs. So based on that, I didn’t really bother (nor waste precious time) looking into other organizations and immediately set up an intake assessment with GRIT at the end of February. The two ladies that came to perform the intake assessment fell head-over-heels for Evanna and just thought she was the most precious thing ever. They were ecstatic about our potential acceptance into their program and made several comments about how well she’s going to do over the next 3 years and all the progress they’re anticipating she’ll to make. Once the PUFF funding is in place, GRIT will hire someone to work with Evanna around June, and the program will officially begin in September -- as it follows the regular CBE (Calgary Board of Education) school schedule (essentially it’s “early intervention preschool”). At the moment it’s been eluded that we will start out with 4 days per week, and because Evanna’s a “morning person”, has been signed up for a morning program. 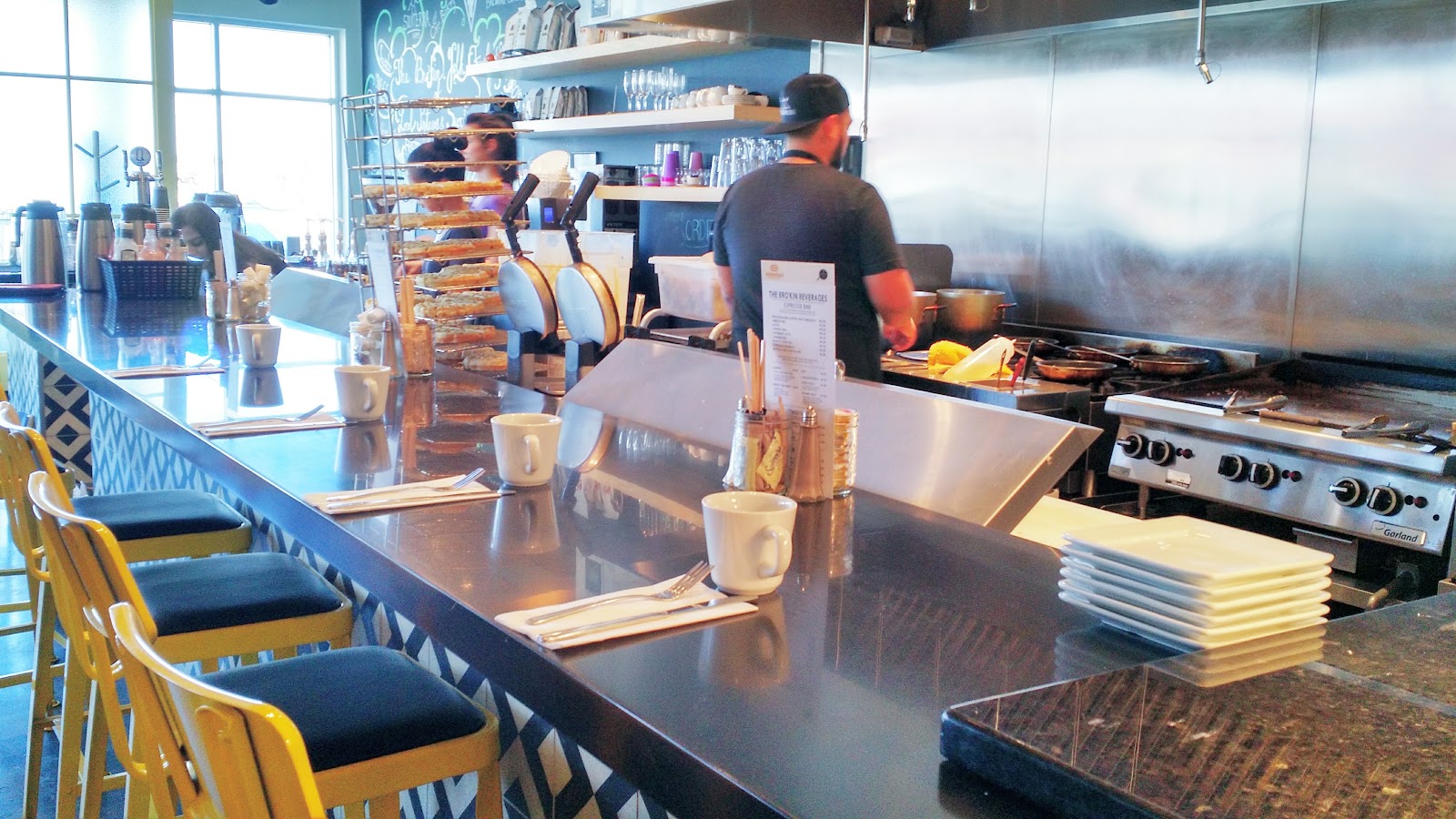 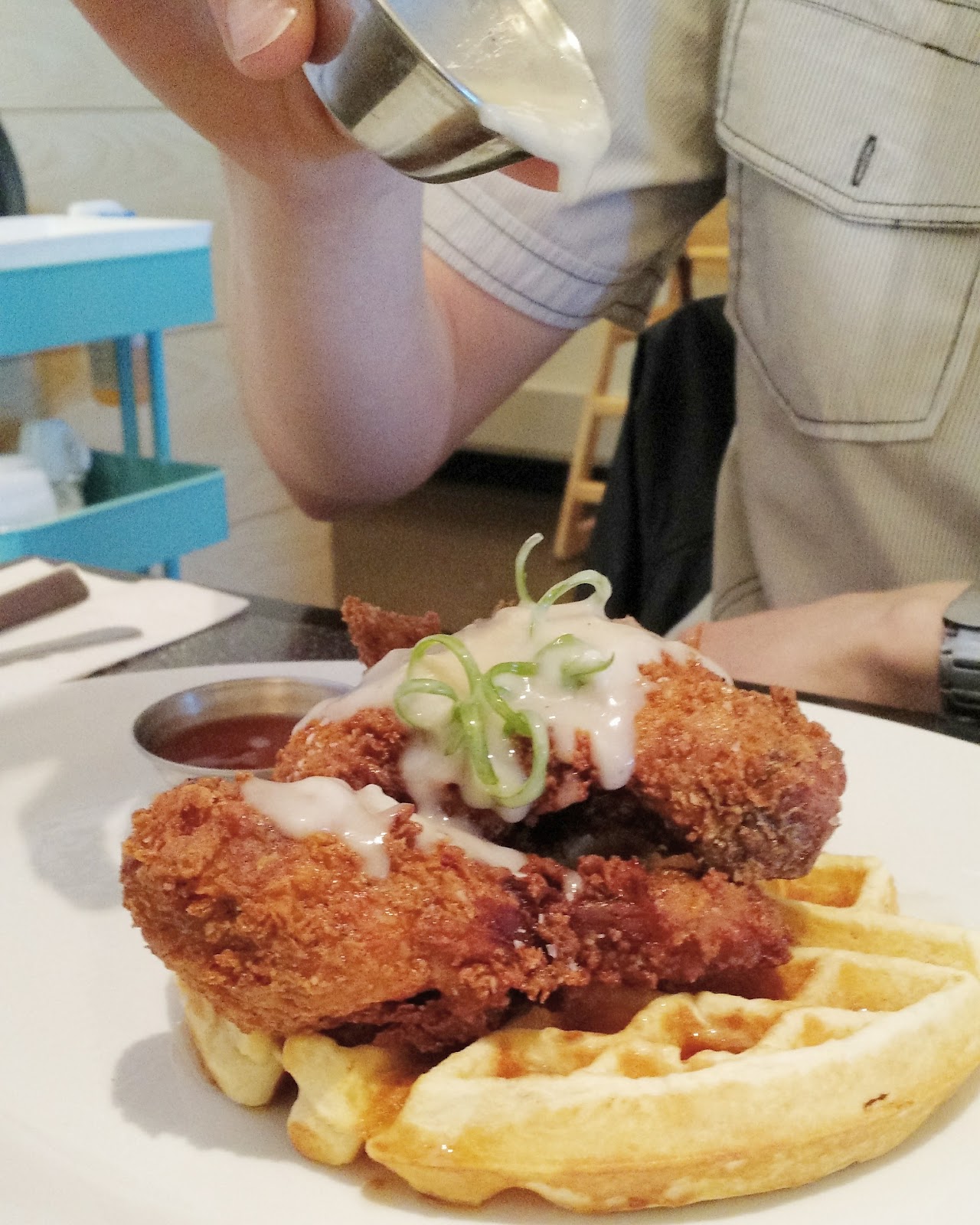 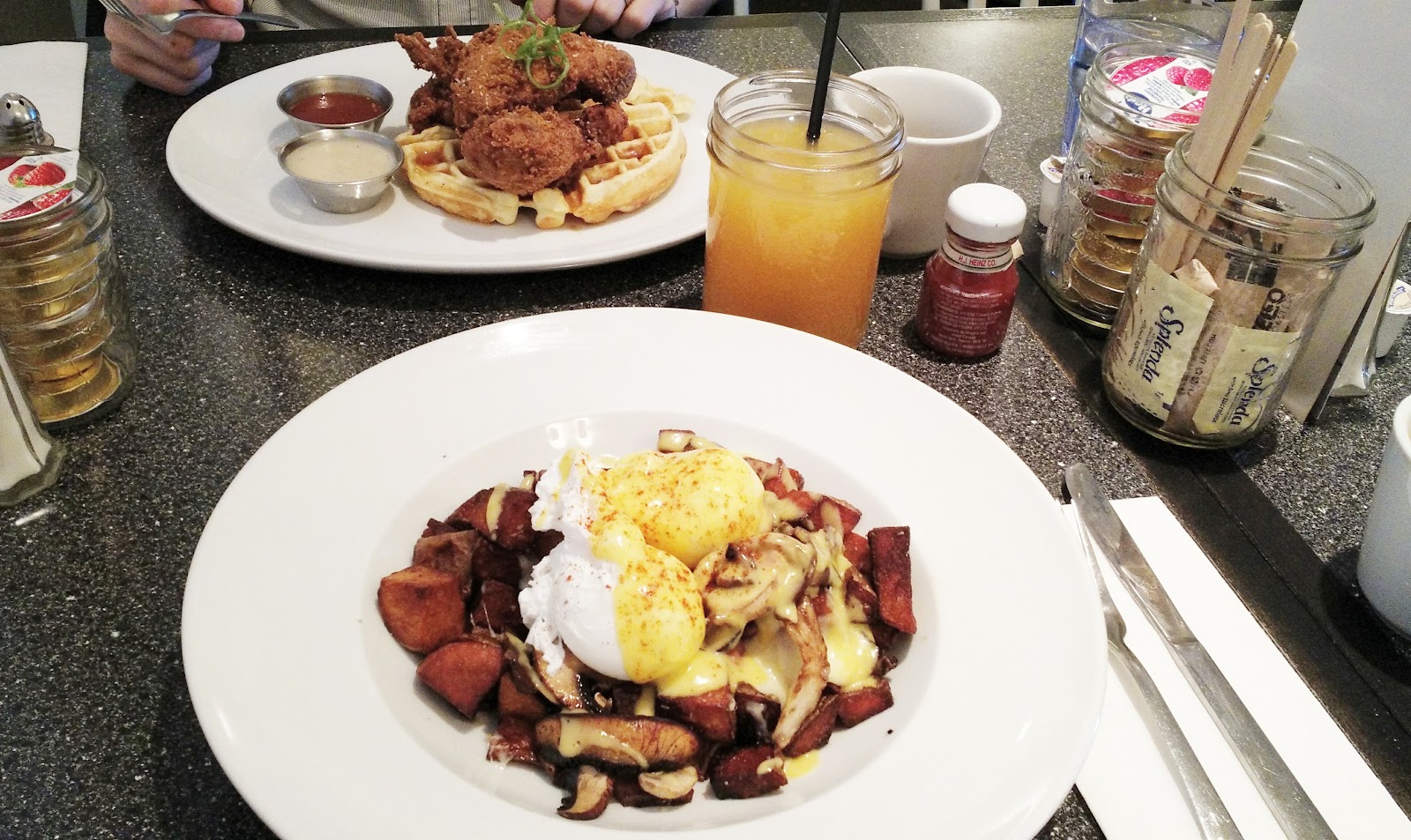 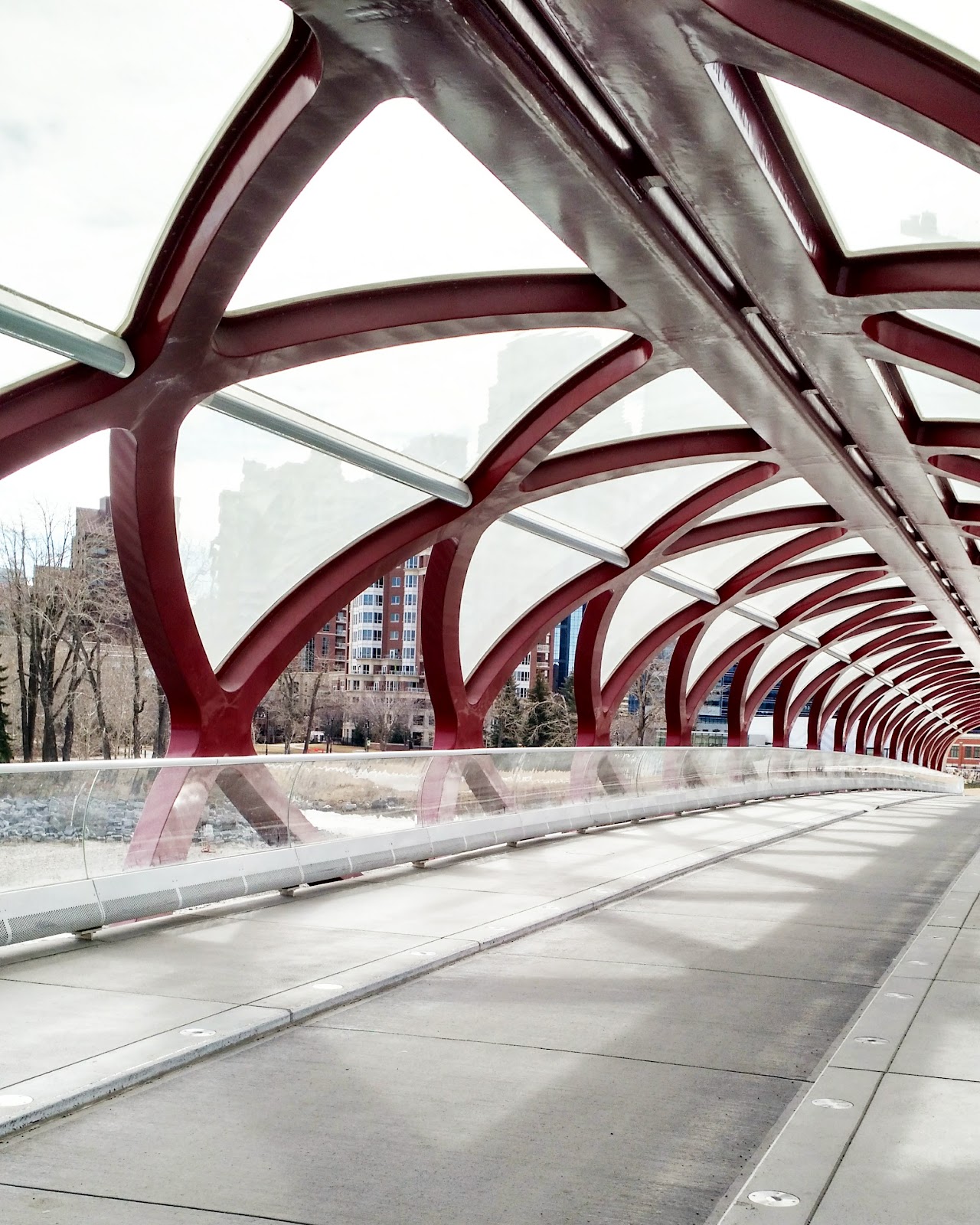 For the 4th year in a row, Evanna’s medical needs is somewhat trumping our anniversary once again –

[April 2014] 37+ weeks pregnant and moved into the Ronald McDonald House up in Edmonton
[April 2015] Evanna hitting 184 days in the ICU and yet, not at the halfway point when all said and done
[April 2016] Evanna’s emergency debridement sternotomy surgery
[April 2017] bronchoscopy procedure

…. so we decided to celebrate our 5th anniversary a little early this year and keep it simple (per Nick’s request) since we just went away to Lake Louise back in February and have another small trip planned for this June. It’s our 5th wedding anniversary this year, and we had always talked about going to Las Vegas to mark this particular milestone (it’s where we had gotten engaged), but such is life and unfortunately that trip will have to wait until a more appropriate time. While this is something I would have been upset about several years ago, I’ve learned there are more important things in life and “it is what it is”.
So last Thursday we booked one of our nurses for a day shift to watch Evanna, and Nick and I went and got brunch from a place that I had been wanting to try out for quite some time (I consider myself a “wannabe foodie”  lol) at a place called The Bro'kin Yolk on the North side of Calgary. We took the time to talk about everything we’ve accomplished over the past 5 years and how far we’ve come as a couple. We’ve crushed almost all the goals we set for ourselves and were able to take a moment to marvel at all our hard work. We tried to talk about what the next 5 years will look like, and while there were a few things we see happening, there are currently a lot of balls in the air (…. and yes, most of that has to do with Evanna lol), so while we continue to move forward – it’ll be in some state of limbo (which is becoming normal for us).
After brunch, we headed to Kensington (downtown Calgary) see the Peace Bridge off Memorial Drive before walking over to try an extravagant milk shake from Burger 320. We then went to see a movie before heading home and spending the rest of the afternoon + evening with Evanna. Overall, it was a nice little moment to enjoy some quality time between all the hustle and bustle of life.

[TOMORROW]
Granting a PICU bed remains available (as it’s generally the main reason our surgeries and procedures get bumped), Evanna’s bronchoscopy will take place on tomorrow morning. At the moment we’ve made the decision that I will still go to work that day (this shift was scheduled weeks prior to getting the procedure date), and Nick will take Evanna to the hospital that morning for the routine procedure (because they have to be at the hospital extremely early, I will help Nick get Evanna admitted and then head off to work). I’ve made Nick promise to call me the moment he finishes speaking to the Respirologist and share the results with me (so all the details will be fresh), and will then join him back at the hospital the moment I get off work. I’m super nervous for what they will find and just *crossing my fingers* that Evanna’s trachea will show that it’s finally starting to strengthen, and we can lower some of her vent settings and work towards sprinting off the vent.
We went into last year’s bronchoscopy with very high hopes, and were discharged a few days later completely devastated that not a single change was made to her very high ventilator settings. Despite improvements in certain areas of Evanna’s health -- we’ve been at this plateau for what I consider the “big stuff” for quite some time (I’m taking years here…), and would honestly like to see some momentum happen. I just wanna see the light (even if it’s small) at the end of this tunnel in regards to our trach/vent journey and know we’re headed in the right direction. We’ve seen the power of prayer work in the past, so if you can, keep Evanna in your thoughts and prayers tomorrow morning that the bronchoscopy will go well and that we’ll receive some positive results. 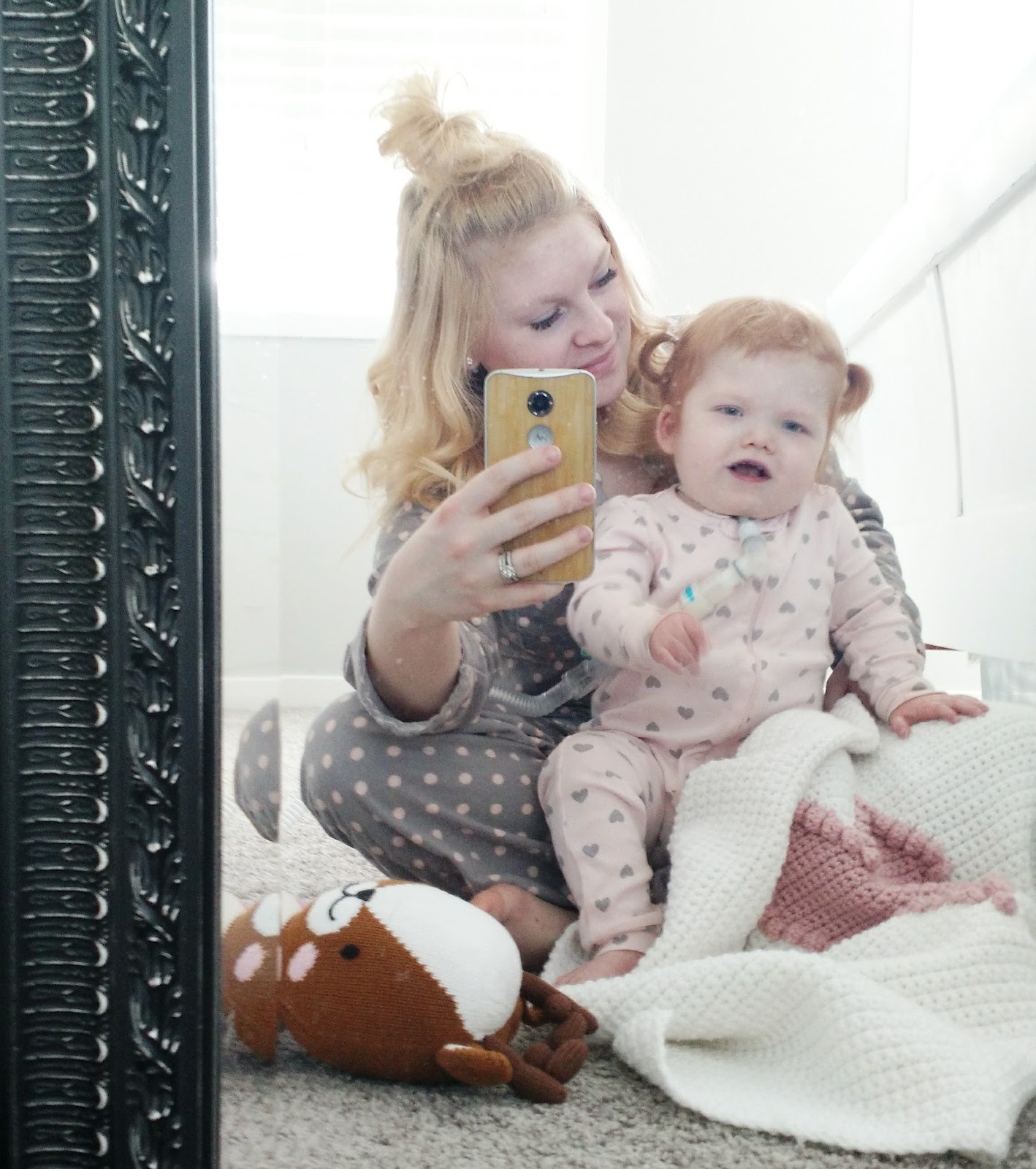 [CARDIOLOGY UPDATE]
Last Thursday I called our Cardiology clinic to see if they could inquire to our Cath date, as we STILL hadn’t heard from the Stollery about a timeline for this procedure. One of the cardiac nurses retuned my call and stated that she called Edmonton and at the moment we’re currently slated for June date (….. and yes, by jaw hit the floor when she said that). The nurse stated that it was obvious that I wasn’t happy about this timeline and completely understands that while Nick and I are reasonable people (we’re not newbies to our healthcare system, so we know how to “wait our turn”), but there is a lot riding on this procedure and we’ve been waiting long enough. The nurse said at the moment, there was nothing she could do, but would email our primary cardiac nurse and cardiologist, as our cardiologist is the only one who can advocate for quicker date. Unfortunately our cardiologist is away for another week, but thankfully this bronchoscopy is providing enough distraction in the meantime. The referral paperwork that was submitted asked for the Cath to be done “within the next 3 months”, and it should have gone in at the beginning of February, but due to some communication limbo, it didn’t go in until mid-March … so my hope is that our cardiologist can try and work some magic and have it moved up to sometime between the end of April or beginning of May.

Thanks again for your all your love, prayers and support,