We had such a busy Thanksgiving weekend, but it was full of so many exciting things. On Saturday Nick and I went to the Calgary Zoo to do the Premier Penguin Behind the Scenes experience. Originally I bought these tickets back in May to do in July as a surprise for Nick’s birthday. Then the Calgary Flood happened, and the Calgary Zoo was hit very hard. So we had to postpone this and wait until the Calgary Zoo was reopened. At the end of August I got an email saying they were starting up the penguin programs again, so we booked in October when Nick was finished with his classes.
Now anyone who really knows us, know that Nick and I really like our penguins. It all goes back to when I was living in New Zealand and Nick and I had starting writing to each other. We hadn’t seen each other since high school, but we had this chemistry and started writing each other (through MSN, which then changed over to Facebook). Eventually we were writing each other every day and a friendship was created. Just before I came home, I asked Nick what I should bring him back from New Zealand. I was thinking more along the lines of a stuffed Kiwi Bird or Sheep, but Nick exclaimed that he wanted me to bring him home a penguin. When I asked why a penguin, he said because they’re cool, look awesome (like they’re wearing a suit), and likes that they mate for life. So I brought him home a penguin. Now that particular penguin never made it into Nicks hands, because my dog Mecka got to it first, but after we started dating, I eventually bought him another one. Since then Nick and I love penguins. We tend to buy penguin cards or wrap our gifts in penguin wrapping paper or bags. At our wedding we had penguin cake toppers and I inserted little penguins on our advice sheets that guests filled out and wedding programs. Our friend Kendall even symbolically adopted a penguin on our behalf as a wedding gift. 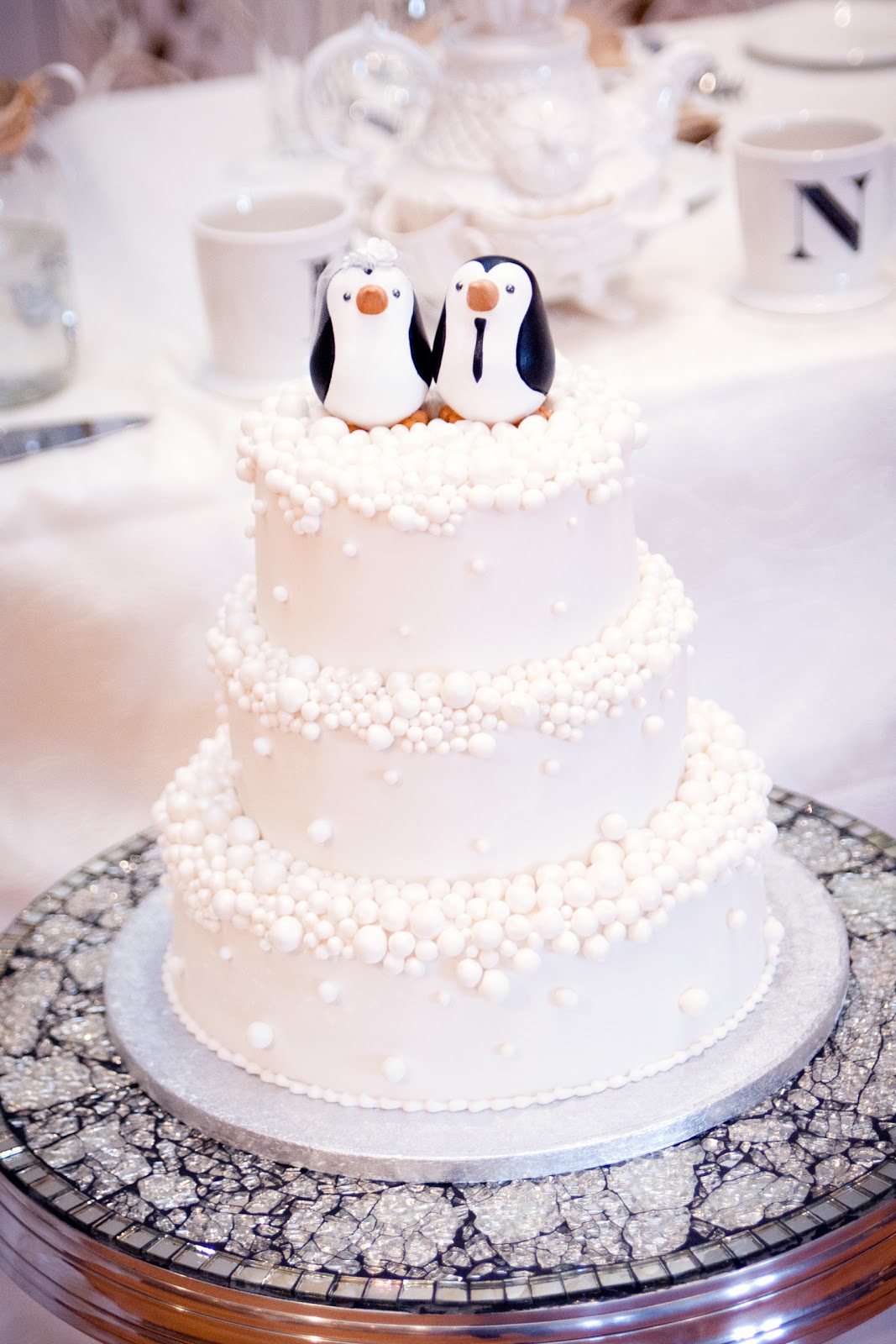 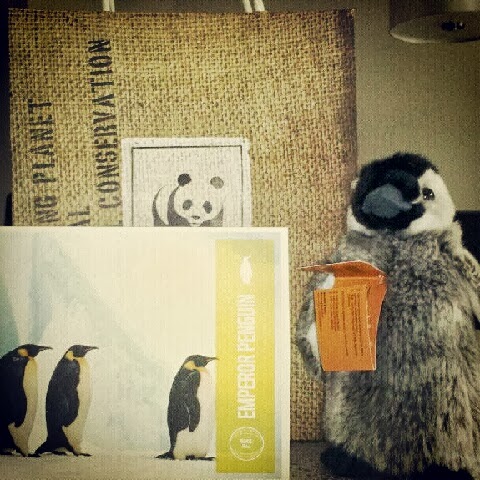 Anyways when I saw that the zoo offered the experience to go behind the scenes and feed the penguins, I thought it would be a super cool thing for Nick and I to do, and bought tickets for Nick’s birthday. The tickets were a little expensive, but overall it was worth it as we had such an amazing afternoon.

Nick and I got to the zoo about an hour before our tour and walked around the zoo. Most of the zoo was still closed off because of damage from the flood, but we got to see a few animals. After, we meet with our guide outside of the Penguin Plunge and she talked about a few of the different species of penguins as explained which ones were outside, and which ones were inside. The summer ones are still outside during the day, and the winter ones are inside, but they’ll soon be switching them as Calgary temperatures drop further. Then we went inside and she told as more about the Rockhopper Penguins (Nick’s favourites), King Penguins and Gentoo Penguins. She showed us the little tunnels they can swim through to get to each side of the enclosure and explained different things to us. Then she took us into the back where the staff all work and showed us the different areas of the Penguin building. She first showed us the vet area and explained to us about a few different things like special programs in North America that determine which penguin should mate with which penguin in order to achieve a good gene pool and so the species will thrive for the next 100 years. She also told us about their feathers, which are not waterproof (they take an oil from their bum and wipe it all over themselves to make their feather waterproof…eww) and go through a molting phase about once a year which can last anywhere from a few weeks and up to a month. During this time they don’t go swimming, so they don’t eat. So just before they lose their feather they eats lots to gain some extra weight as they lose weight while molting so they're also a little grumpy during this phase. The guide/keeper told us about some of the unique personalities of each penguin and their smallest penguin definitely has the “little man syndrome”, meaning she is the meanest. She even chased a big mean King Penguin around and made him give up his food to her. The keeper told us most of the penguins are scale trained, which is really important because it’s the best way to tell if a penguin is sick, so it’s something they watch very closely. The penguins just step right up onto the scale and is hand feed their favourite fish as a reward. 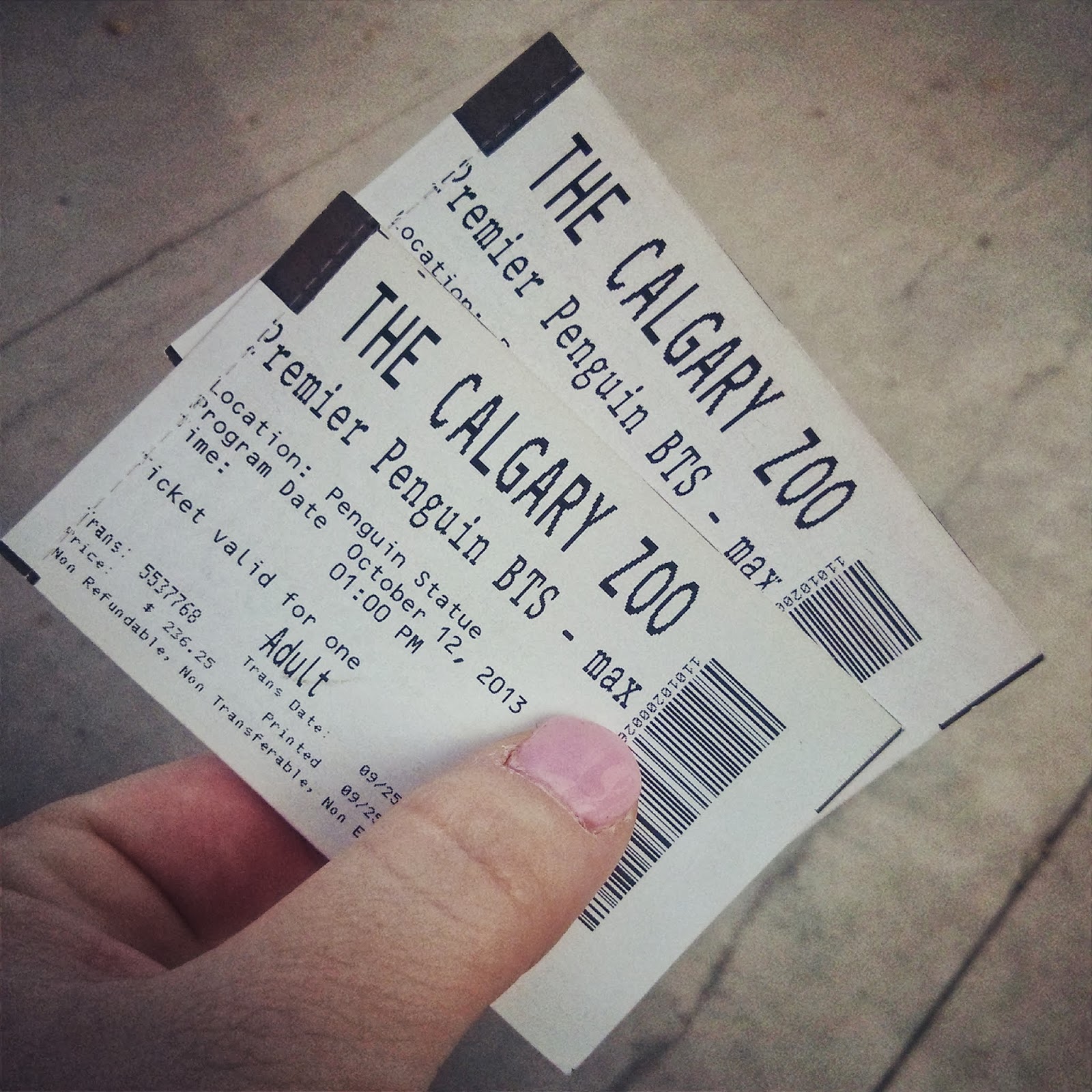 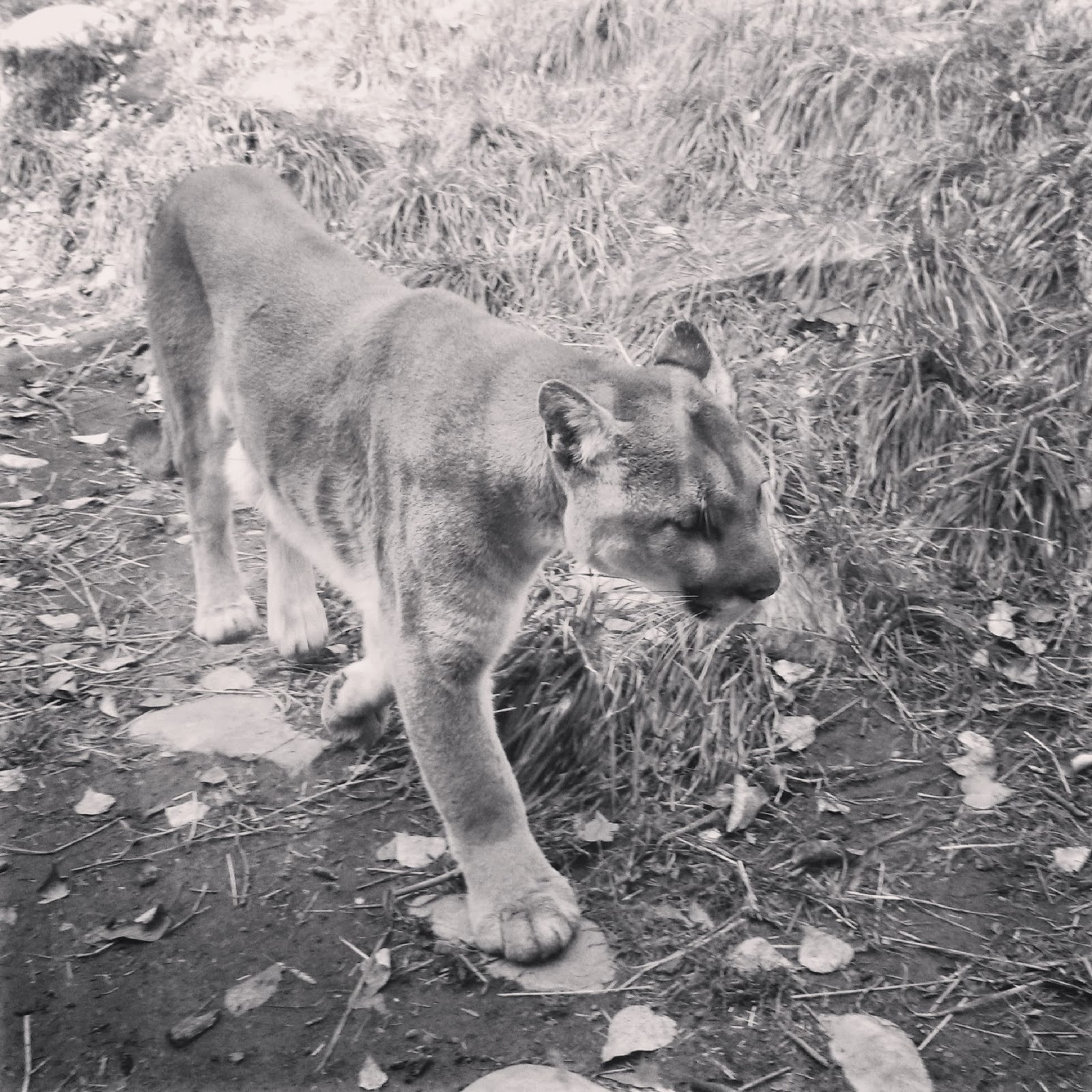 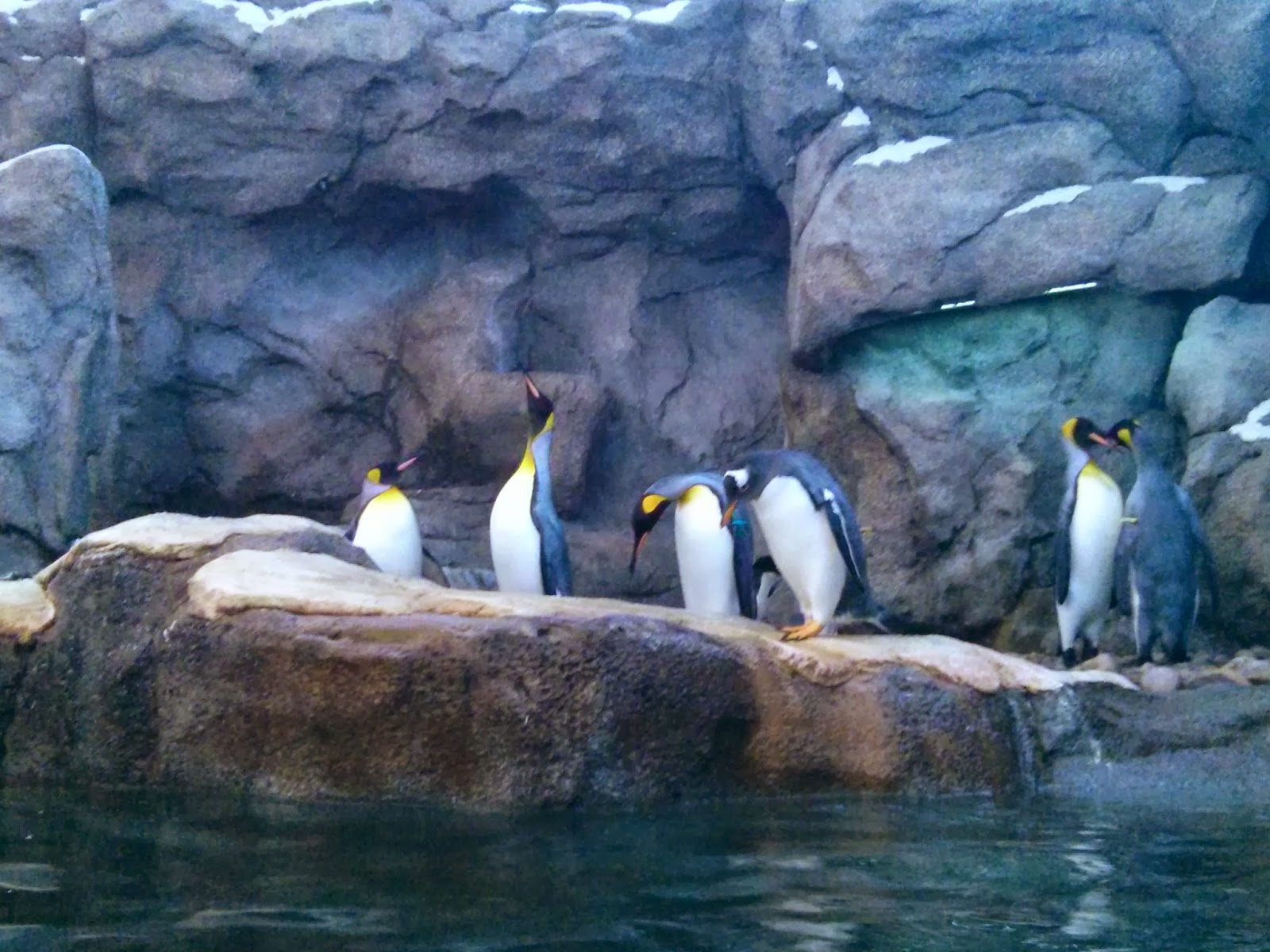 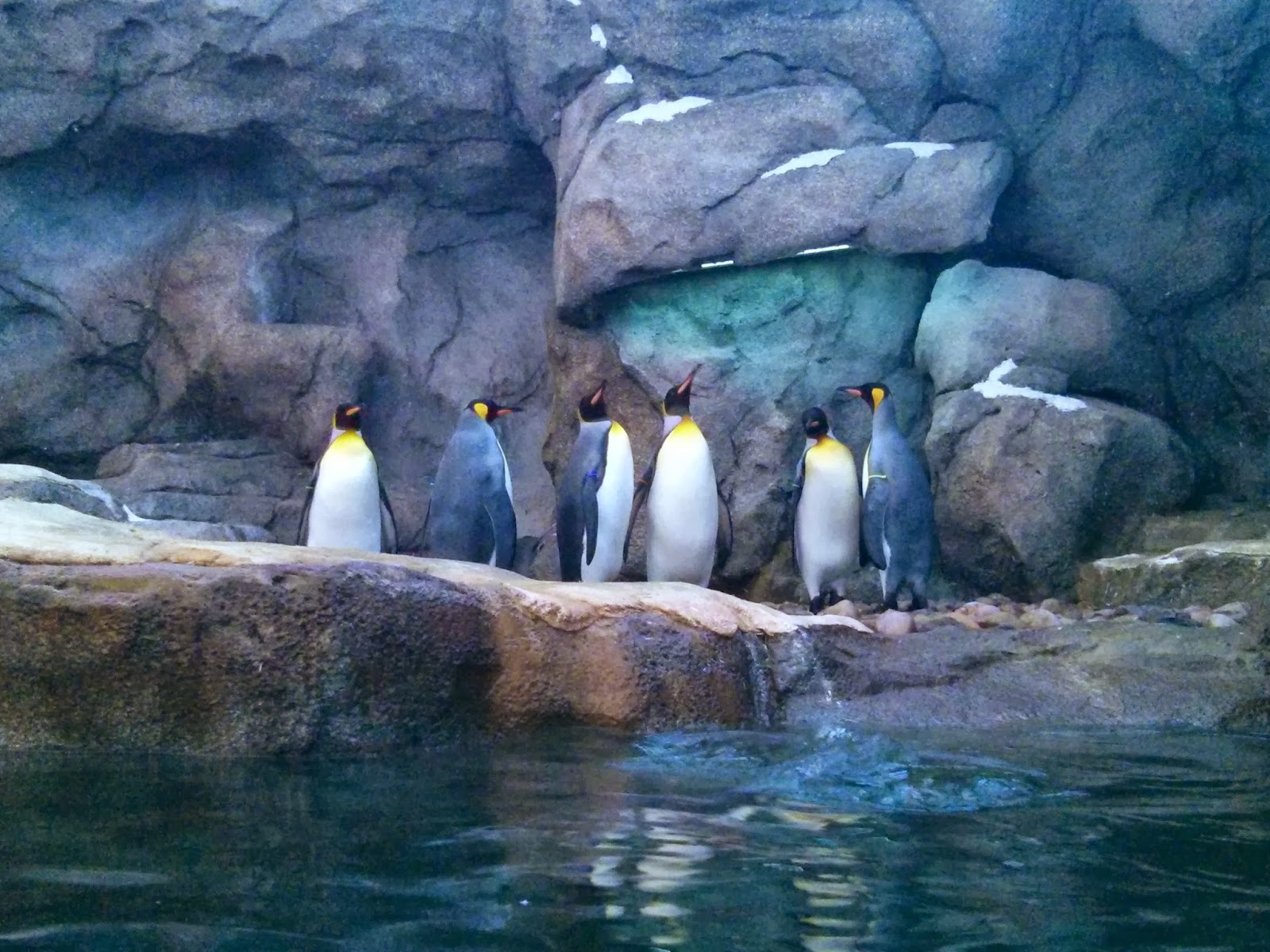 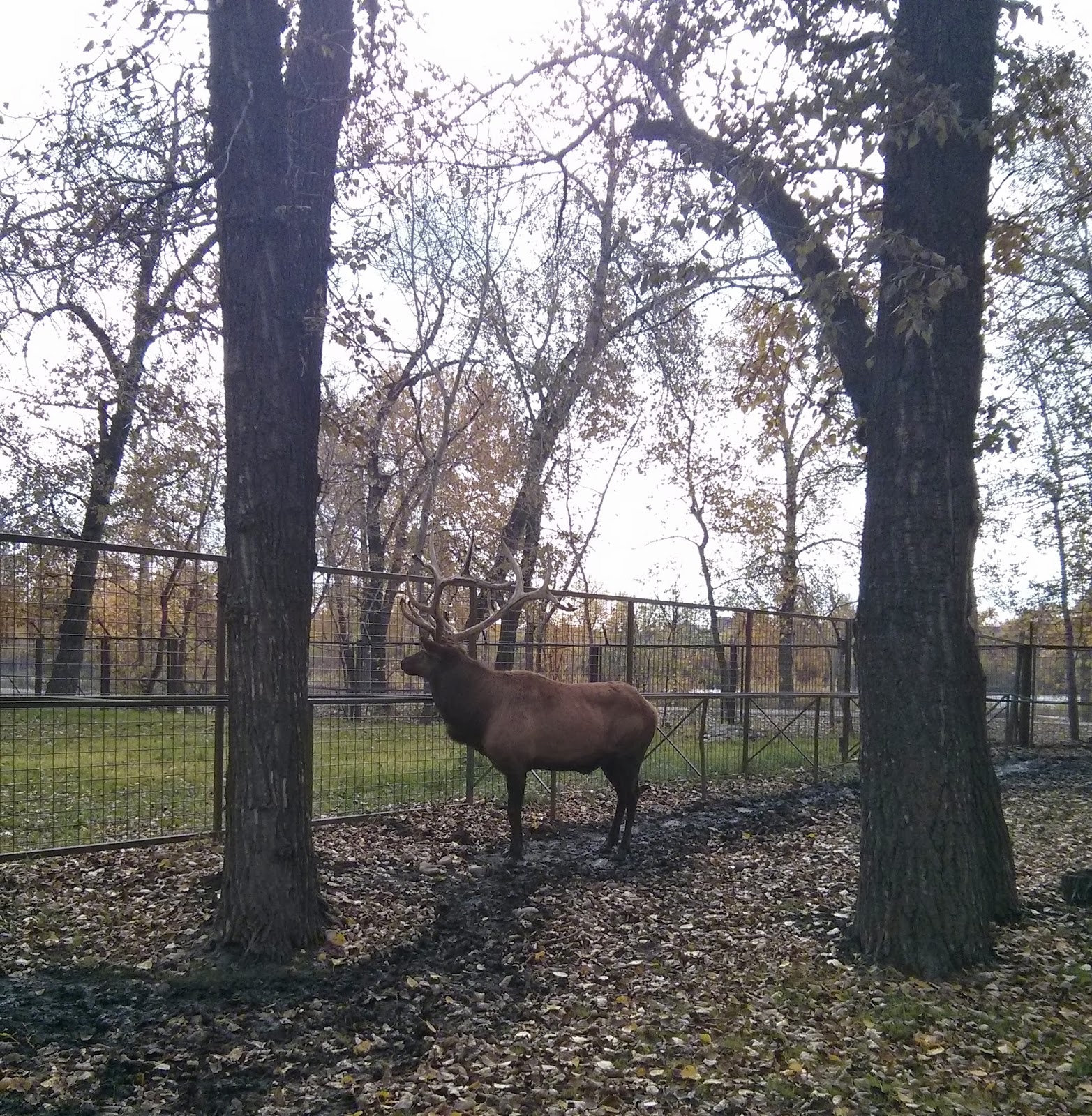 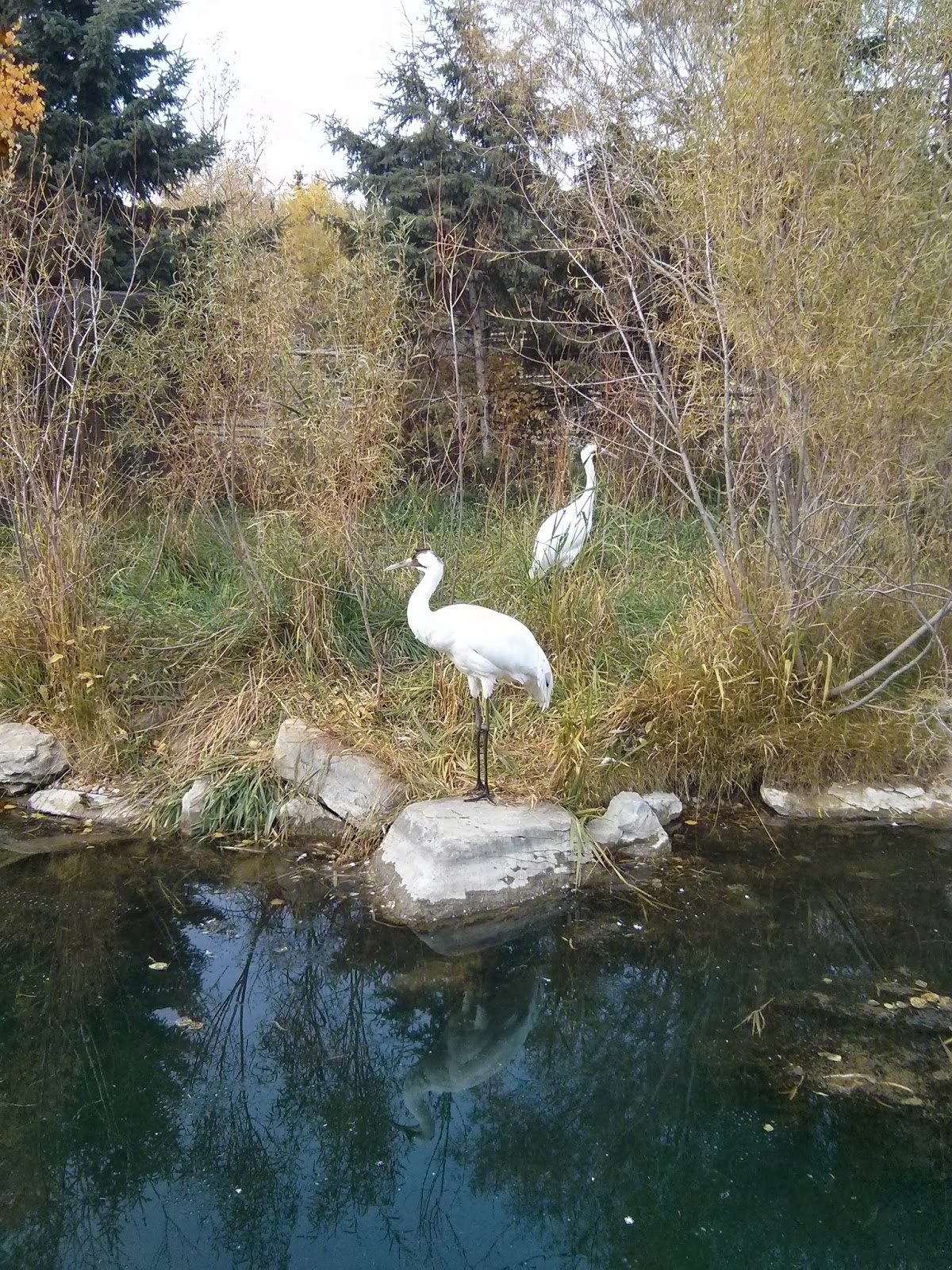 She showed us the quarantine rooms and explained they’re uses.  She even told us of a Calgary ophthalmologist performed eye surgery on a penguin that had cataracts and was unable to care for himself. After training him to receive eye drops the surgeon took the penguin to her clinic and performed the surgery in his eyes. After they brought him back, they had to keep him in quarantine so he wouldn’t get any water near his eyes. After about 2 weeks he was let back out, and other then being far-sided, is a completely normal penguin again. He can feed and groom himself as well as walk and swim all he likes. We thought that was a really cool story.
She showed us the huge freezer full of 5 different types of fish and they only get fish shipped in from sustainable fish farms and told us the halibut is their favourite. She took us to the food preparation room and explained to us about the feedings. The first one in the morning is generally the only handfeed one, but that’s because those fish have vitamins stuck inside them. Just like our food, when food is frozen, it loses some of its nutrients. They don’t ever force the penguins to eat them, and just hope they’ll take it the next day.
Finally the keeper took us out with a bucket of fish and we got to feed the penguins. There were lots of onlookers watching us, and were taking pictures of us feeding the fish. I kind of felt like a celebrity, and it was so cool to see the penguins up close. The only penguins we weren’t allowed to feed were the King Penguins, and that’s because they can be a little more aggressive and the zoo doen’t want any guests to go home bleeding. One King Penguin however came over and stood beside me looking for food, but I just kept feeding the Rockhoppers and Gentoo’s.
Finally after some pictures and finishing feeding the penguins, our tour was over (the fire alarm also went off, but at least it happened near the very end of our tour).
I seriously would do this again in a heartbeat, and I plan on too in the future. Nick and I left happy, and Nick just kept saying how cool it was. I’m glad he liked his birthday gift. 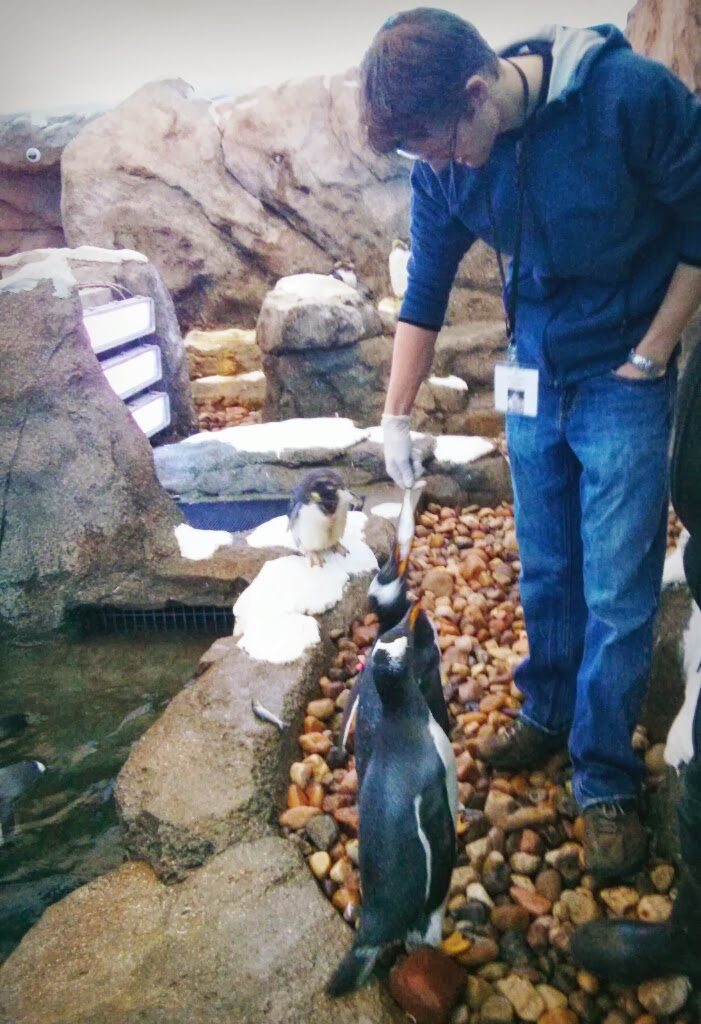 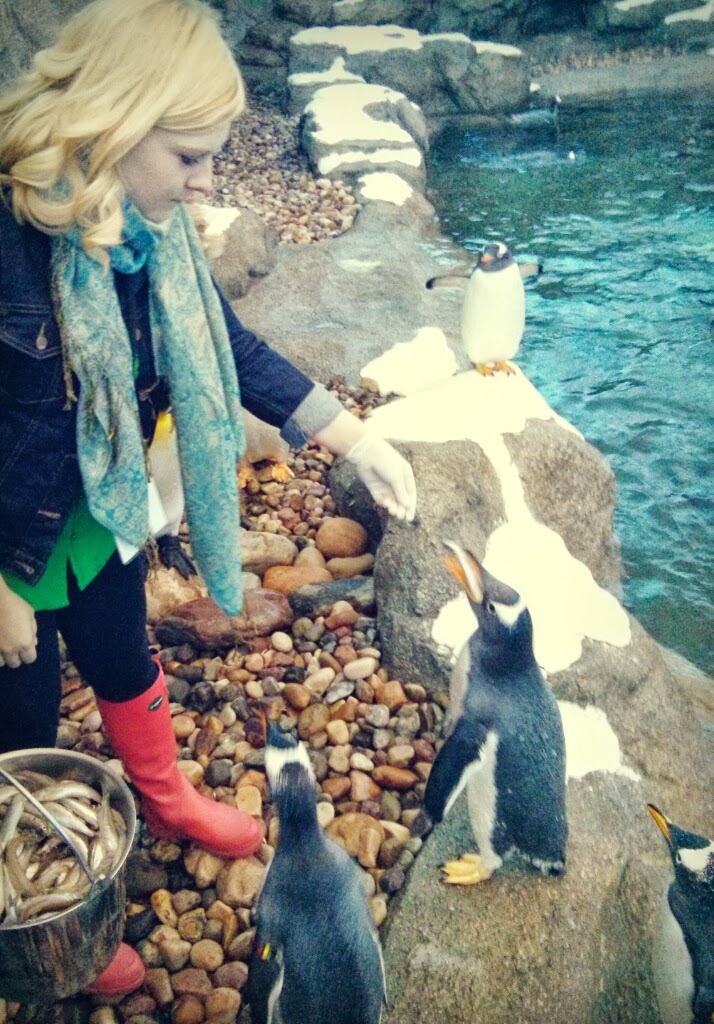 Later that night Nick and I went on a double date with two friends that I set up on a blind date. We had dinner downtown on Stephen Avenue at the Metropolitan Grill. After we walked over to Village Ice Cream for some dessert. It was a cute little shop, and the ice cream was so good. In all it was such a great day, filled with some really good memories. 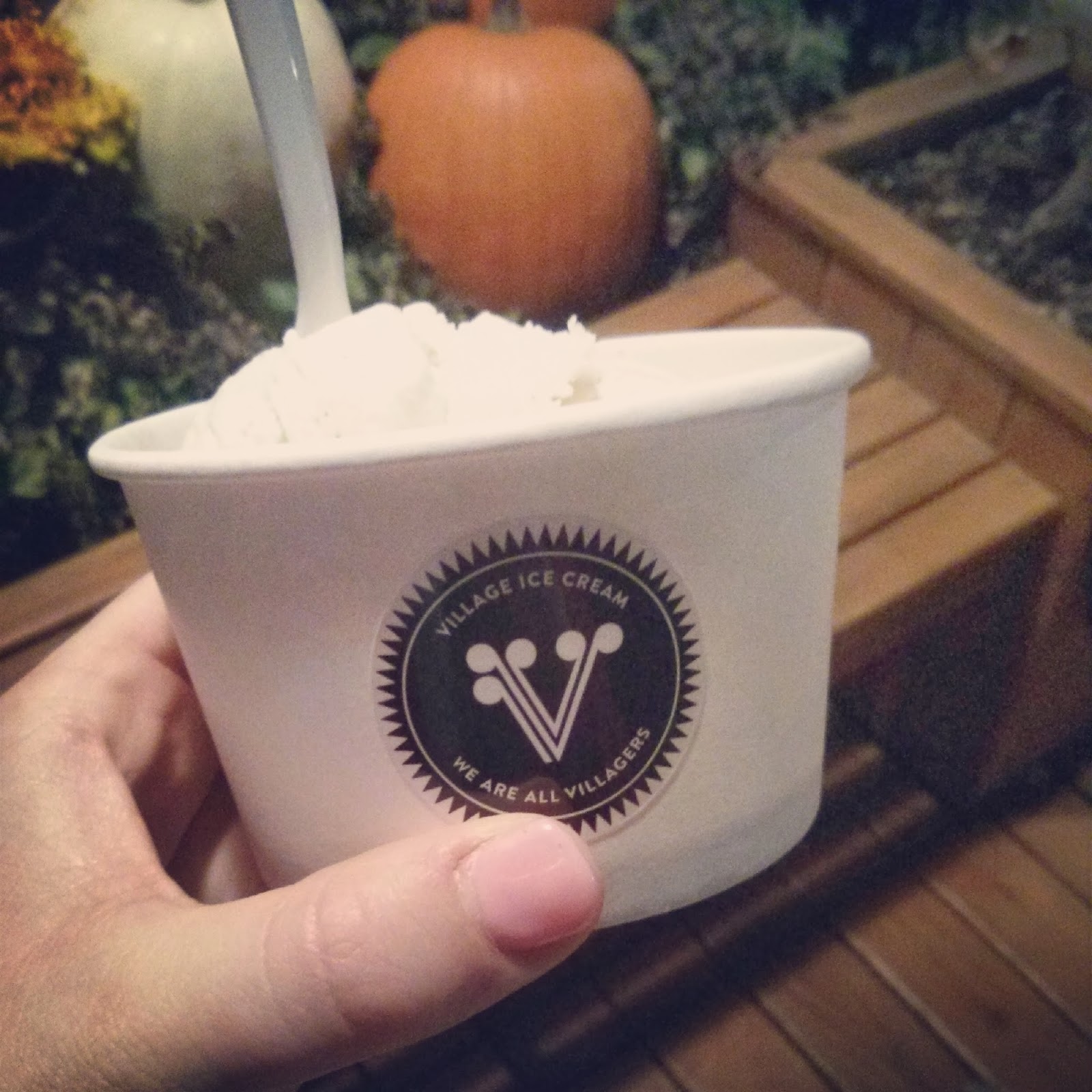 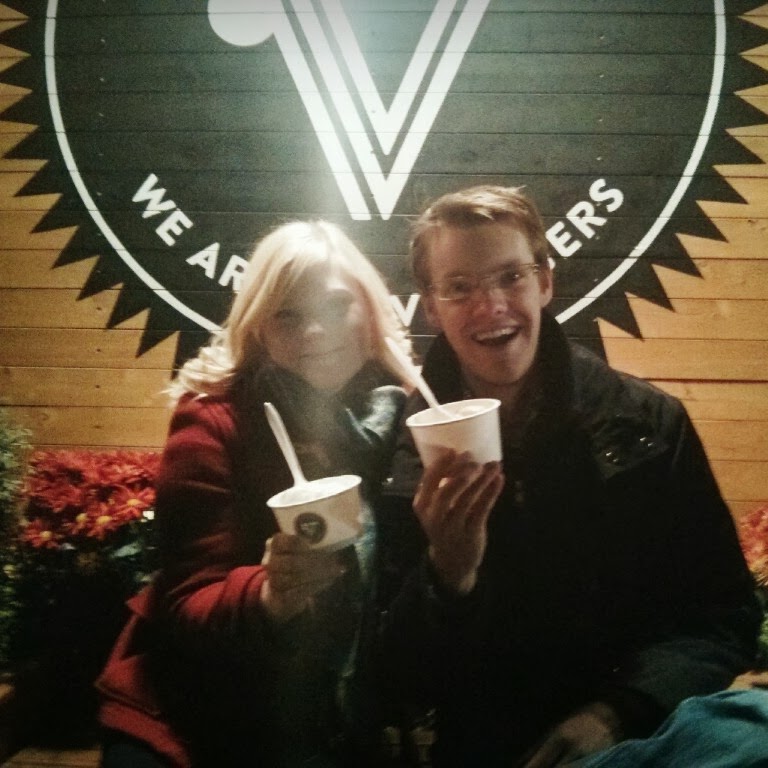 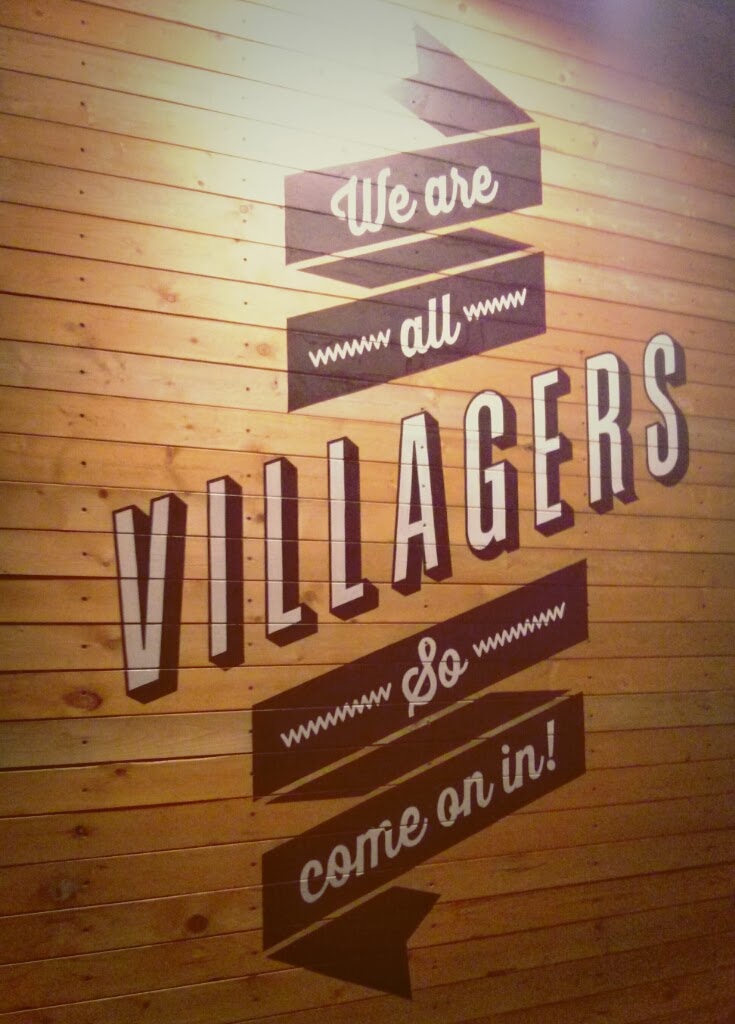