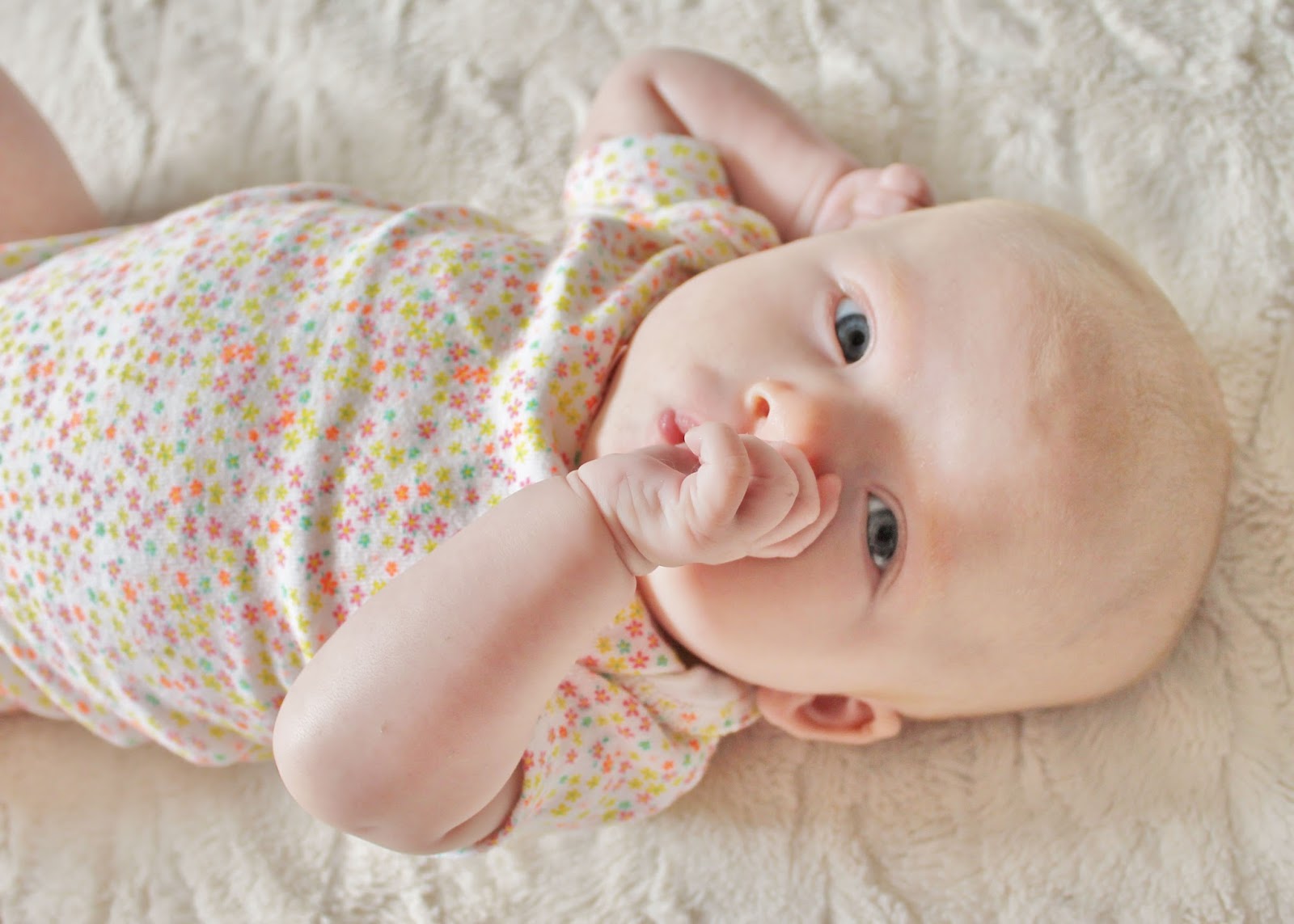 I feel it’s about time to explain the technicalities of Evanna’s heart. She’ll be having open heart surgery very soon, and it’s only fair that I break down her diagnosis to help those who’ve been following along understand what exactly is being done. Now I am not a medical expert and will never claim to be (but I’m pretty sure I could now ace any Cardiology test in high school biology). Evanna’s diagnosis is very, very complicated. Most physicians (family, pediatrician, ER, etc) get a confused look in their eyes when I spell out her entire diagnosis because certain aspects are pretty rare. Only cardiologists and nurses who work either in the Cardiac Clinic or on unit 4 at the Stollery know what I’m talking about when we discuss Evanna and her very special heart.

Let’s start with her diagnosis: Tetralogy of Fallot, with Pulmonary Atresia, VSD + MAPCAs. She also has 22q11 “DiGeorge Syndrome”, but I’ve already explained that here. I do plan on doing a Genetics update post in the near future, but at the moment I don’t have anything new in regards to her chromosomal defect. 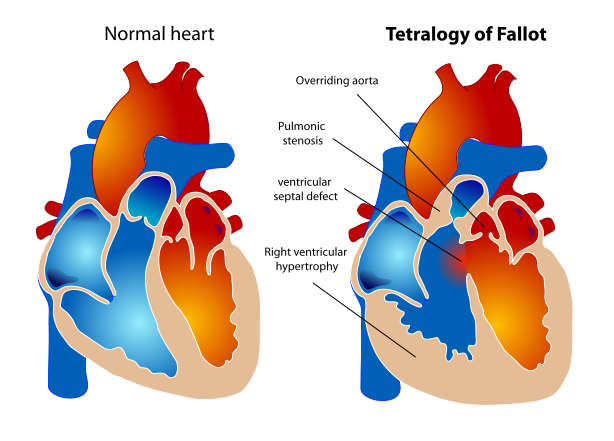 Tetralogy of Fallot: This part of her diagnosis is a bit more common in regards to heart defects, so generally anyone with a medical degree has heard of Tetralogy of Fallot. Tetra means “four” and it generally involves four abnormalities of the heart that commonly appear together.
Overriding Aorta: The aorta is positioned directly over a VSD (the hole in her heart), instead of the left ventricle. This results in the aorta receiving some blood from the right ventricle, causing mixing of oxygenated and deoxygenated blood, and thereby reducing the amount of oxygen delivered to the tissues.
Pulmonic Stenosis: This just means narrowing of the Pulmonary Artery. Evanna actually Pulmonary Atresia, which means she doesn’t have a pulmonary artery at all (which is considered the worst degree of TOF). I’ll talk more about this further down.
VSD: Ventricular Septal Defect. This basically just means that Evanna has a hole between her two ventricles. This also causes mixing of oxygenated and deoxygenated blood, and thereby reducing the amount of oxygen delivered to the tissues. Many people are born with a VSD and it’s considered a very common CHD (congenital heart defect). Some will close up on their own within the first year, while others are so small that they don’t require any surgical intervention, and some require open heart surgery to close the VSD. This also is what allowed us to take Evanna home after she was born, because even though she has a severe heart defect, her body does receive a relatively good amount of oxygenated blood at the moment. You may hear me talk about her oxygen levels (at the moment she maintains levels in the mid-80s), and that just indicates how much oxygen her body is receiving. A normal person has oxygen levels of 96 – 100.
Right Ventricular Hypertrophy: The right ventricle is more muscular than normal. Due to the misarrangement of the external ventricular septum, the right ventricular wall increases in size to deal with the increased obstruction to the right outflow tract. 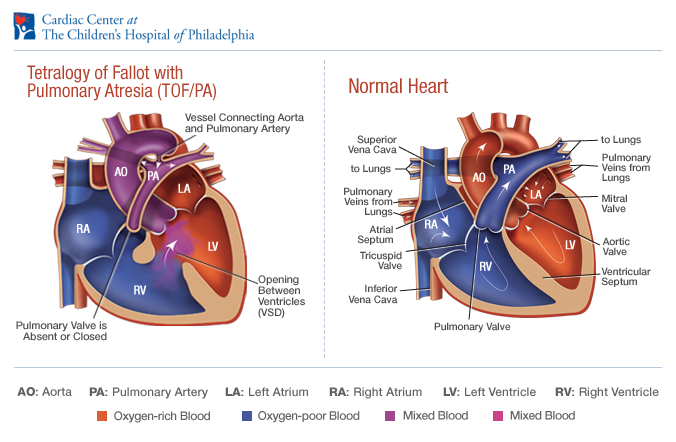 Pulmonary Atresia with a VSD: This is the very first diagnosis we were officially given, so I explained a little bit about it in this post here. But for the sake of this post, I’ll explain it again. I’ve already discussed what a VSD is (a hole in the bottom part of the heart). Pulmonary Atresia is when the pulmonary valve fails to develop. In a normal heart, the pulmonary artery is what brings the blood to the lungs to be oxygenated. A conduit (ie. a tube) will have to be inserted into Evanna’s heart in place of the pulmonary artery, but these have to be replaced every few years as her heart grows, and even when she’s an adult if the conduits begin to develop obstructions like clots, scarring or calcification. Many people ask how many surgeries Evanna will have to have, and this is the sole reason I can’t answer that question as she could have open heart surgeries all her life to replace conduits. 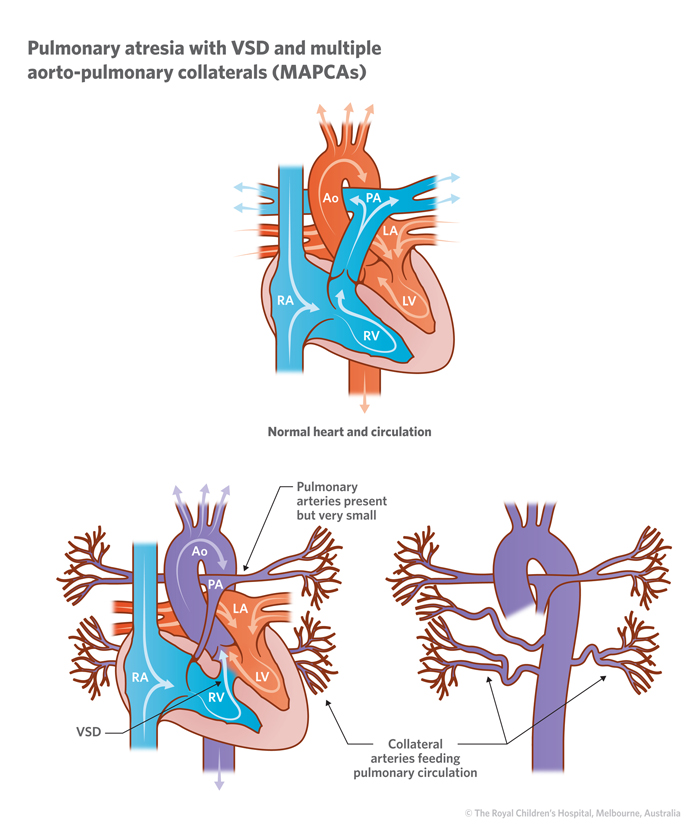 MAPCAs: Major Aortopulmonary Collateral Arteries. This is what makes Evanna’s heart extremely complicated, rare and special. If you hear me talk about her collaterals – this is what I am referring too. Because her heart did not develop a pulmonary artery and ductus arteriosus, her heart made its own little pathways to the lungs called MAPCAs (ie. collaterals). They are tortuous vessels that arise directly from the aorta or its branches. MAPCAs can vary in number and origin, follow circuitous routes to reach central, lobar, and segmental pulmonary arteries, and have variable areas and locations of stenosis (narrowing). Their pattern is unpredictable and often incomplete, leaving some lung segments with excessive or insufficient flow, and they can become narrow over time. As a result, a given segment of the lung may be supplied solely from the true pulmonary arteries, solely from the MAPCAs, or both. The morphology of the MAPCAs plays a critical role in determining management decisions. The aim of treatment for MAPCAs is to group them together and convert their supply to deoxygenated blood from the right side of the heart. Please note that this is the reason Evanna cannot have a heart transplant. The collaterals make her heart and lungs very intertwined, so the only way she could have a transplant is if they did a heart and lung transplant, which is unheard of for babies. I believe the youngest successful heart and lung transplant done here in Alberta was on a 4 year old girl. Basically Evanna has to make do with the heart she was given for the time being.

Other: Evanna also has a right-sided aortic arch verses a left-sided arch. This basically just means that the aorta comes down the right side instead of the left. This isn’t really a big deal, but just something to take note of.

Anyways this is the best way for me to describe her diagnosis in laymen terms, and it’s also how I understand her diagnosis. I plan on pretty much copying and pasting this post under our “heart journey” section of the blog for a quick reference, but it’s definitely a possibility that I may have to tweak the post in the near future, as we learn more and more about her special heart at every appt. She had her first cardiac cath just last week (which I will post about soon), and it was such a huge learning experience for the Nick and I. For example, we now know that we may be dealing with 5 collaterals instead of 3-4 (I think that’s a good thing). I’m so grateful that we live in a time of some amazing medical advancement that gives Evanna a chance of a normal life and we just have to continue to pray that her surgeons can successfully repair her heart. We are not out of the woods, and her cardiologist and surgeon will not give us any guarantees. She however is doing so well right now, and Dr. Fruitman is impressed with her progress so far, so that gives me hope.

We have awesome friends and family who provide amazing support – so from the bottom of our hearts, and Evanna’s special heart – THANK YOU!