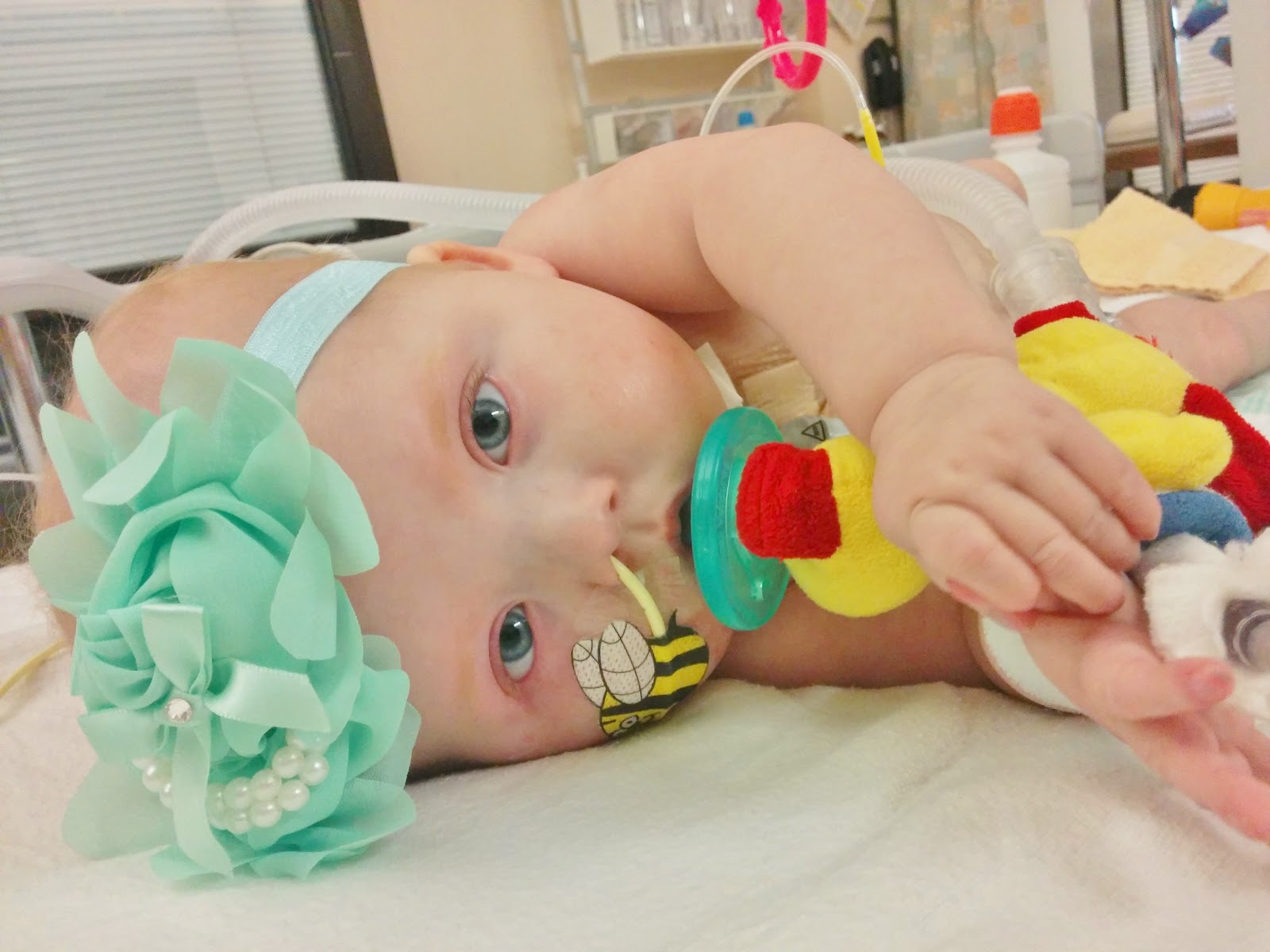 What a fantastic week we've been having here in Edmonton. While I tend to focus on what we need to do to get Evanna home, when I think of how far we come,  I'm in total awe. Other then weaning her sedation medication, and tweaking her feed and vent settings - morning and evening rounds here in the PCICU have been more of a "social call". Dr. Ryerson has stated on a few occasions that Evanna is DEFINITELY ready to move out of the ICU and it's time for her to go home! In fact, if we didn't have to go back to Calgary, we would probably already be on the floor by now! The biggest change we've seen in Evanna over the last few days has definitely been her whole demeanour. While we could get Evanna to smile once in awhile, we really had to work for it. Now, Evanna is handing out smiles, left, right and centre! She's getting so strong, tries to roll over and holds up her head so well when we sit her up. We also recently did a weight, height and head circumference check and when you compare it to the 22q growth chart, Evanna's in about the 7-25 percentile (thanks Ashley for figuring that out for me), and I believe that's around the 5 percentile on the regular growth chart. Considering everything that Evanna's gone through over the last 9 months here in the ICU, that's not too shabby and I'll definitely take it! So proud of my little girl!

Earlier this week we were finally taken off of isolation, however to avoid any bumps on our road home, the intentivists have kind of asked if we could hold off on going for walks around the hospital as we don't want anything to hold our transfer back to Calgary. Over the last few days, Evanna has been experiencing some minor withdrawals, so they've decided to slow her drug wean even more. At this point there is no rush to get her off of her sedation medication (she's on Hydromorphine, Ativan and Chlonidine around the clock), however, we're down on extremely low doses of the Hydromorphine and Ativan and will probably start working on the Chlonidine soon.
On Wednesday Dr. Cave, myself and the Respiratory Therapy manager had a teleconference with two Calgary intentivists about Evanna's upcoming transfer. Originally we were aiming for this paat Thursday or Friday, but they felt it was in Evanna's best interest to transfer at the beginning of the week verses the end of the week. So with all that being said, Evanna will be transferring back to the PICU in Calgary tomorrow!! We're feeling really good about this transfer as Evanna is just doing incredible, and I can just tell she's ready to go home. We have a few little things to iron out before we will get the big A-OK to walk out of those hospital doors, but I'm sure we'll get there in no time.

So what are those things that are left to do in order to take Evanna home? Well, first is we definitely need to get Evanna's feeding all situated out. The Pulmonary team here in Edmonton is known for being extremely conservative with orally feeding vented kids and pretty much don't even try until they're doing sprints off of the ventilator. There is always a risk for them to aspirate feeds which definitely is not a good thing, but as long as you just do a very small amount at the beginning and work your way up, the risk is decreased. Fortunately, the Calgary Pulmonary team is less conservative and not afraid to give kids a chance. A nurse that works both in the PICU in Calgary and the PCICU/PICU up here in Edmonton confirmed that she definitely noticed that particular difference between the two Pulmonary teams, and from my recollection the only thing that was stopping us from letting Evanna oral feed back in April in Calgary, was the fact that she was still NJ feed (meaning food was being delivered past her stomach), and they just needed proof that she could handle food in her stomach before they proceeded with giving her a bottle. I know there is no guarantee that Evanna will be successful and she may hypothetically need a GTube temporarily, but it was the one thing that she was good at prior to all of this, so I have a lot of faith in her. A trach can change things and swallowing definitely feels different when you have one, but it's only fair to give Evanna a chance to declare herself.

Other then continuing to wean her sedation medication (which we can do from home), is setting up homecare and Evanna's bedroom. Before they let us take Evanna home, we have to have nurses in place to care for Evanna at night. Here in Canada, there are two ways of doing that. First way is to leave it in Alberta Health Services hands, let them hire and train LPN's to look after Evanna and let them take care of it all. Unfortunately there are some downsides to this option -- for example, they won't even begin the hiring process until we're on the floor and practically ready to go home. We've been told it could take about 6 weeks (which means that we might not be home until September!) and we don't really get any choice of who they hire and comes into our home. So with all of that in mind, we've decided that we're just going to do "self-appointed" care. What this means is we are allocated a certain amount of money based on Evanna's needs (she's approved for LPN status based on the fact that she's on a ventilator) and we can hire and train who ever we want too. It's a lot more work in the beginning that Nick and I have to do, but it means we may have an opportunity to take Evanna home a lot quicker. We will have complete say of who is in our home, and over time we can tweak it to fit our lifestyle better. I haven't really put the word out that we're looking for staff, but through word of mouth, we've already had some people express interest or tell me that they might know someone who would be interested. We have lots of connections with friends that are nurses, EMS trained people through Nick, and my cousin is an RT student (Respiratory Therapy and trachs definitely go together!), so I feel we won't have too much trouble trying to find qualified people to look after Evanna at night. While RN's and Paramedics may not be interested as it's LPN wage, I'm hopeful that maybe RT students looking for some experience, LPN's or EMT's needing some work will be interested.

Anyways - in my opinion, those are the two biggest things that we need to accomplish in order to get Evanna HOME! There are a couple of minor things that have to also have to get done, like converting Evanna's nursery into an appropriate space that will cater to all of Evanna's new accessories (while no parent dreams of making their child's bedroom into a mini "hospital room", I'm going to try and have some fun with it and do my best to keep it looking like a bedroom). My lovely sister actually won me a "Spring Cleaning" service back in May for Mother's Day, so that will definitely come in handy to help prepare our home for Miss Evanna. All in all, it's going to be a very busy few weeks as we help Evanna continue to move forward, continue our trach training, find and hire staff -- train them, and get our house ready. While I do have a goal in mind for a "discharge date" and it's a very realistic one, I know from experience that things may happen to delay that, and we just have to continue to go with the flow. So much is involved when your child is trached and vented, and being discharged isn't a that simple anymore. In the future I definitely plan to blog posts showing Evanna's room, maybe do a video* giving everyone a glimpse of what "trach care" looks like and may even record a "trach change" that is done about every 28 days. While I sometimes get overwhelmed thinking about what the next few years are going to look like for us (say goodbye to spontaneous date nights -- calling up the neighborhood babysitter will be completely out of the question), I know we'll get through it, as we have such an amazing support team of family, friends, church leaders and those following our journey, and I feel like we'll be just fine.

*Speaking of videos, I've recently downloaded this new app called Periscope, which was launched by Twitter not to long ago. It's an awesome tool to do LIVE broadcasts and people who are watching can type questions or comment during the broadcast. I've already done a few, and it's just another unique way to connect with people. Unfortunately the WiFi at the Stollery isn't the best (while I can get onto Facebook and Instagram, I can't connect to Netflix from the ICU), I know my internet connection was a lot better at the children's hospital in Calgary. I have already done a few broadcasts from the Ronald McDonald House and answered some people's questions this past week, but hopefully I can do a quick one from the ICU in Calgary so everyone can see Evanna (which is who people really want to see). Anyways, if you are interested, just download the app and follow me at @kierrai If you miss the live broadcast, you still have 24hrs to view the video after it's been aired. I'm truly addicted and overall it's been a lot of fun to talk with people (think of it as a one-way "Face Time").

Prayers for a SAFE transfer back to Calgary, and that this one will stick! Hopefully 4th time is the charm for us, and that Evanna can stay in Calgary and work towards being successfully discharged! 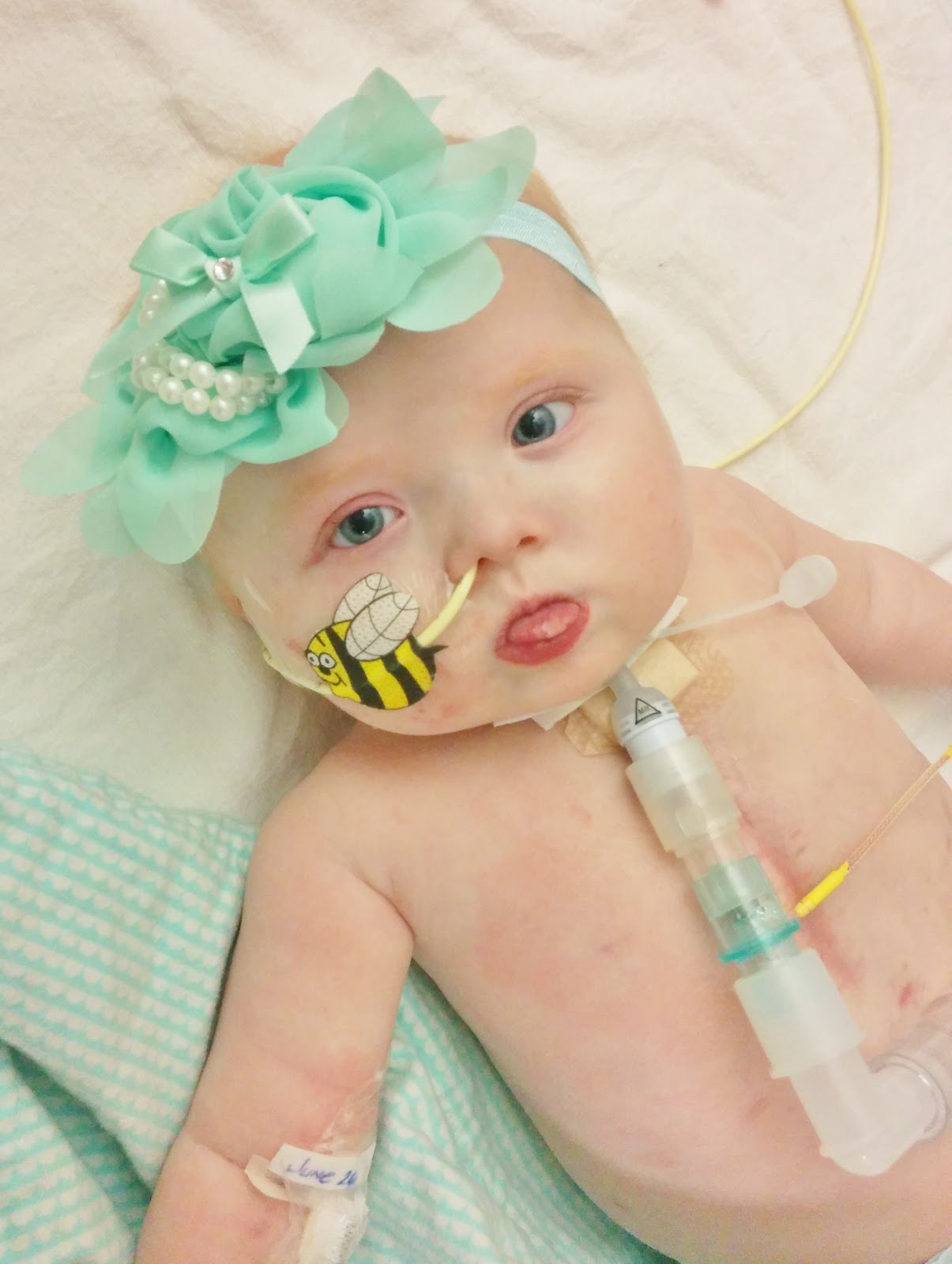 +  I've partnered with Baby Jack & Co as a "Kindness Rep" in their #spreadthelovey campaign. They make sensory blankets, and have created a way for YOU to purchase one, which will be donated to a family in the NICU/PCICU/PICU. The blankets purchased through THIS LINK (<<--- click there), will be shipped to me, and I in turn will pass them along to families here at the Stollery Children's Hospital. My personal goal is about 50 blankets (between the 3 ICU's here at the Stollery, there are about 40 beds), but I need YOUR help to get me there! Currently I'm at about 20% for my goal, so please let me know if you have any questions, as I would be happy to answer them! {Also remember: Enter code KIND to offset the pre-set shipping on the website. No matter what shipping info you enter, it will be shipped to the donation recipient (me) in 1 bulk shipment}
Written by Kierra Irvine
Email ThisBlogThis!Share to TwitterShare to FacebookShare to Pinterest