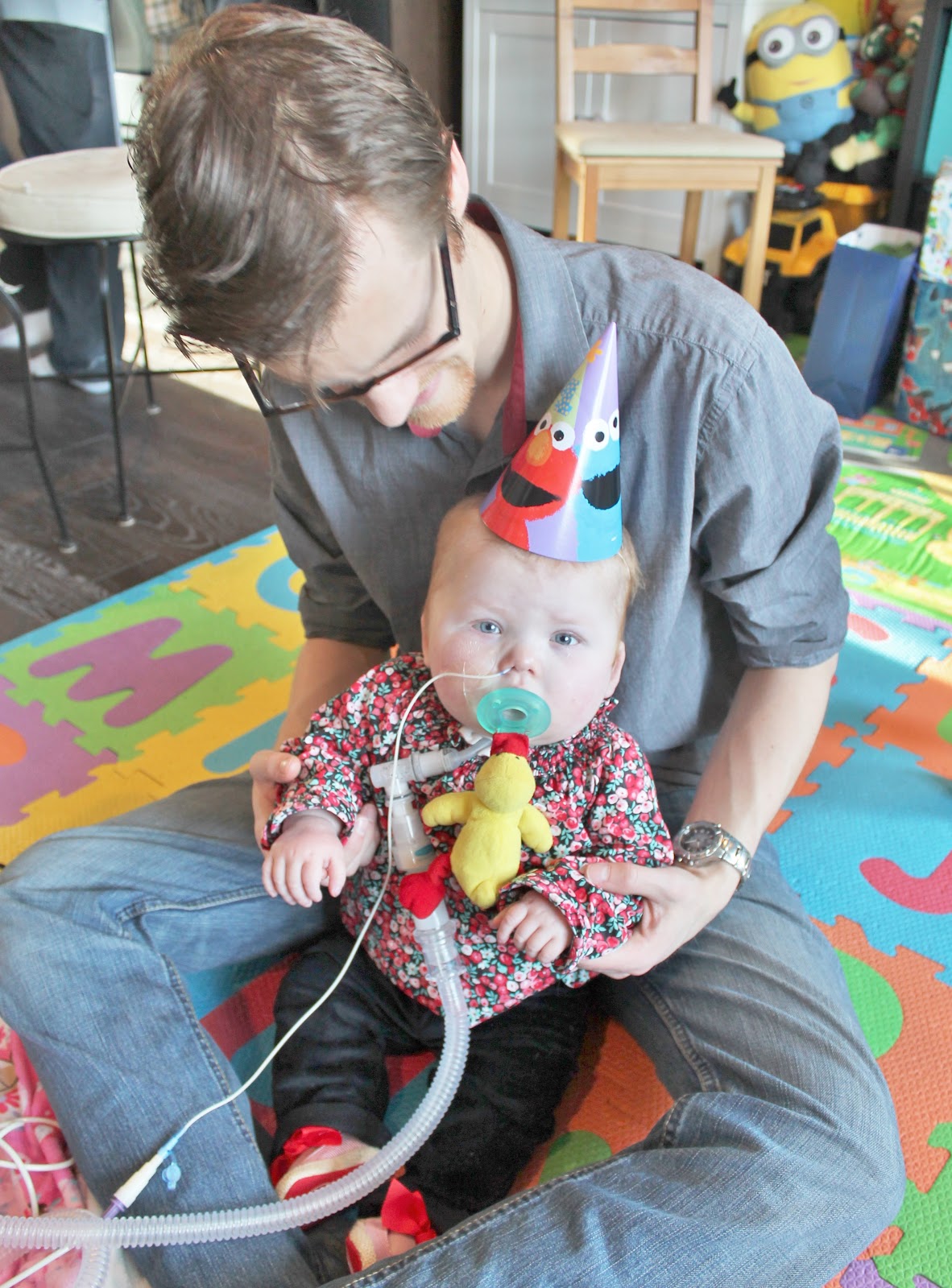 We did it! Our week of multiple medical appointments has come to an end, and considering our terrible weekend leading up to it – it actually didn’t go as bad as I thought it would. Evanna handled herself like a champ and maybe – just maybe, is getting use to car rides.

First up was Tuesday (Dec 1) with our back-to-back appointments on opposite ends of the city…oh and did I mention that it was also on a day that Nick had to work? I arranged for one of our day nurses to work (we only get about 2 days a week of daytime nursing hours), but based on Evanna’s weekend (she was incredibly retchy), I was anticipating the absolute worst. Thankfully Evanna seemed to finally get over this episode (which I’ll talk about more further down this post), and our nurse was a great help. First was Evanna’s RSV shot, and while that went well, I was definitely a nervous wreck in that waiting room – THAT’S RIGHT, I have now become that mom full of panic and anxiety as my child had to sit in a room full of strangers and more importantly – icky bugs. When your child is more prone to catching a virus (via the trach) and an illness can equal a hospital admission, then you can see my dilemma. I never wanted to be one of those “helicopter moms”, but after spending over a year in hospital, it’s kind of the last place I wanna be right now (admissions are inevitable due to future procedures and surgeries…but I’d like to avoid unnecessary trips to the hospital, thank you very much).
We then headed up to the hospital for our cardiology appointment. I actually almost cried with tears of joy walking through those clinic doors as an OUTPATIENT – it just felt so good to be there for a regular checkup. First they did an ECHO, and though the tech had a mini wrestling match with Evanna’s legs – with the help of good ol’ Frozen, Evanna did very well. She then had an ECG (EKG) and then finally got to see Dr. Fruitman and Patty (the Cardiac Clinic RN). Dr. Fruitman said that her ECHO was stable (yeah!!), but it was definitely time to discuss Evanna’s next Cardiac Cath that was due last month. At the moment, Evanna requires a Cardiac Cath every 6 months so they can see her collaterals and maybe even try to balloon and stent them, but because we were trying so hard to get Evanna HOME and she was stable, her medical team (including her surgeon in Edmonton) decided it was okay to put it off until the New Year. So Dr. Fruitman stated that she would present Evanna in the next few weeks at Cardiac Conference (a conference between the cardiac surgeons and cardiologists in Alberta, Saskatchewan and Manitoba) and get Evanna booked. We also discussed on how to actually GET Evanna to Edmonton. Normally this is kind of an outpatient/mini admission procedure that we would drive up for, but Evanna isn’t exactly the best traveler at the moment AND she now comes with a lot of equipment/accessories. While it’s not done too often for an outpatient, it was agreed that we will admit Evanna down here at the Alberta Children’s Hospital and then transfer her up I believe by ground ambulance. Evanna is on quite a bit of oxygen and high ventilator settings, and overall it will just be safer for her to transfer her verses going by car. Over time as Evanna gets stronger and on less oxygen/lower vent settings we can definitely drive to Edmonton ourselves, but in the meantime Evanna is still considered quite “acute”, and we just want to do everything we can in the safest way possible.
Another major thing we discussed was Evanna’s calorie intake. Over the last several months, every time Evanna is weighed, it continues to climb faster than we would like too (and normally cardiac kids have the opposite problem). We’ve already decreased her calories a few times, but it seems like we haven’t found the right spot. You see, though Evanna is 19 months old, due to the fact that she’s supported by a home ventilator and still somewhat “sedentary” (which will change as Evanna continues to become more mobile), she does not require as many calories as someone else her age. It’s something we will always continue to tweak over the next several years, but in the meantime we have been given the go ahead to further dilute her formula (so she still receives the same volume for hydration purposes, but it will contain less calories), and see what her weight does over the next month or so.
We are booked for another cardiac appointment just before Christmas to see what came of the Cardiac Conference, and hopefully get a timeline for the Cath. 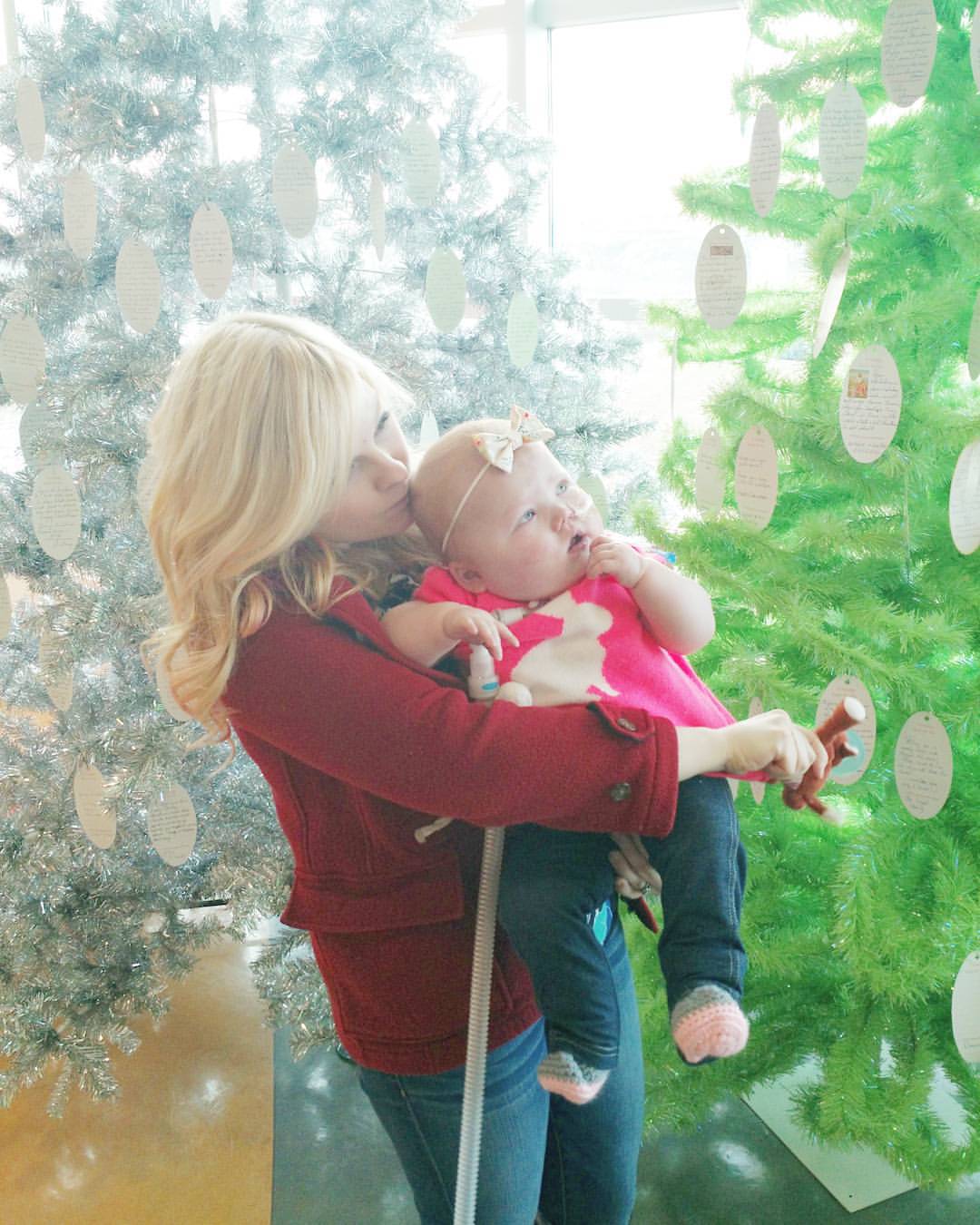 On Thursday Evanna finally had her FEES test that we’ve been waiting for a long time to do. FEES stands for Fiber-optic endoscopic swallowing evaluation (FEES). A thin, flexible lighted instrument (endoscope) is passed down the throat so the ENT can see the esophagus. I initially thought Evanna would fly through it, as she was completely orally feed the first 5 months of her life and it’s not like we have secretion issues (we never have to suction her mouth unless she’s puking), but it seems like we might have a longer road ahead of us then I thought. It has been determined that Evanna is somewhat at risk for aspirating as they saw “bubbling” secretions and her upper airway was inflamed and swollen. Dr. Drummond said this means that we’re looking at a longer road ahead of us in regards to getting Evanna back to feeding and to be prepared for one to a couple of years. He did however say that he would like Evanna to receive “tastes” of foods and that the ENT nurse will call us next week with instructions on how to proceed.
The moment Dr. Drummond said all of this, I immediately asked about a GTube. Now that we know this will be a long term thing and getting back to oral feeding will be a longer process, I feel like an NG isn’t for us anymore. Yes, it involves another surgery, but there are lots of benefits to a GTube and we can finally get rid of the darn NG. Nick and I do not enjoy putting an NG down her nose and I feel like we’re getting to a point we’re it’s a little detrimental (causing a little bit of trauma and the inflammation) verses being a benefit. It can also cause oral aversion as it can actually get in the way and be an issue with feeding therapy when it’s safe to finally feed Evanna (it’s a tube going down your esophagus, so I’m sure she feels it every time she swallows). Finally, the GTube will allow us to feed Evanna other stuff besides formula, as some other GTube mamas have stated that we can feed her some "blended" foods and will get me all those resources when the time comes. Dr. Drummond said it’s definitely something we should consider, but to talk to our pediatrician about to put a referral in for us.

On Friday we finally got to meet our lovely pediatrician. We actually had a different pediatrician last year before Evanna’s first open heart surgery, but Nick and I weren’t huge fans of him. When I began to talk about the situation to another local 22q mom (who happens to be a family physician herself), she mentioned Dr. Culman who apparently was very knowledgeable and had lots of experience with both medically complex kids and has a few 22q11 kids under her care. So just before we transferred out of the PICU back in August, I asked if they could get us a referral, and thankfully she accepted Evanna as a patient. During the appointment we talked about Evanna’s retching episodes and stated that after talking to several 22q moms, I feel Evanna has something called Cyclic Vomiting Syndrome (CVS) as it’s listed as one of the symptoms of DiGeorge Syndrome. As there really isn’t a test for CVS, it’s hard to diagnose so Dr. Culman asked me what treatments others were doing. I first asked if we could get a prescription for Zofran to help elevate the severe nausea Evanna experiences and well go from there. There are a few other things that other 22q moms mentioned to me for treatment options and so if the Zofran doesn’t work, we’ll try those and maybe even consult with a GI doctor.
We then brought up a GTube, and Dr. Culman agreed immediately. Most kids with trachs have GTubes anyways, and an NG is only meant to be used as a short term option. A GTube is a safe and reliable way to feed a child for a longer period of time. You don’t run the risk of formula going into their lungs and if Evanna gets sick, there is a secure way to give Evanna meds and keep her hydrated. They’re really easy to keep clean and change out and once Evanna doesn’t need a GTube, you just take it out and the hole closes on its own. Dr. Culman said the process can take a few months however (it’s not an emergency surgery… so we now have to learn to be patient for surgeries – something we’re generally not use to lol), but she’ll put in the referral immediately.

So that’s basically where we stand from a medical standpoint. I feel like we’re still in that “transition” period of being home, but as more and more time passes, I know we’ll see the inside of the hospital less and less. Everyone is happy with how Evanna is doing and we will continue to move forward as Evanna allows us too.
Basically in the immediate future, we are going to continue to work on Evanna’s development (PT rescheduled and will be coming this week!), and she has a Cardiac Cath in Edmonton at the Stollery and GTube surgery planned over the next several months. As for other medical appointments for the month of December, we have a Complex Airway Clinic (CAC) appointment this week where we hope to lower her oxygen requirements from 4L to 3L and do a planned trach change. Then we have another RSV shot in a few weeks and a Cardiology follow-up just before Christmas to find out the Cath timeline.

We have some fantastic Christmas plans for Evanna, and I can’t wait to enjoy our first real holiday at home (in Canada, Thanksgiving was back in October)! We’ve almost been home for an entire month and we’re thrilled at how smooth everything has gone so far. We have amazing friends and family who have been so accommodating, and I feel like we’re finally getting back into our old routine. Our friends have been so great and I feel so blessed to have them, as we’ve had several get togethers over the last several weeks since we’ve been home, and knowing how much work it is to take Evanna out, have allowed all the gatherings to be at our house. We’ve been having so much fun and I seriously can’t describe how amazing it's been to just LIVE!


xo The Irvime Family
Written by Kierra Irvine
Email ThisBlogThis!Share to TwitterShare to FacebookShare to Pinterest