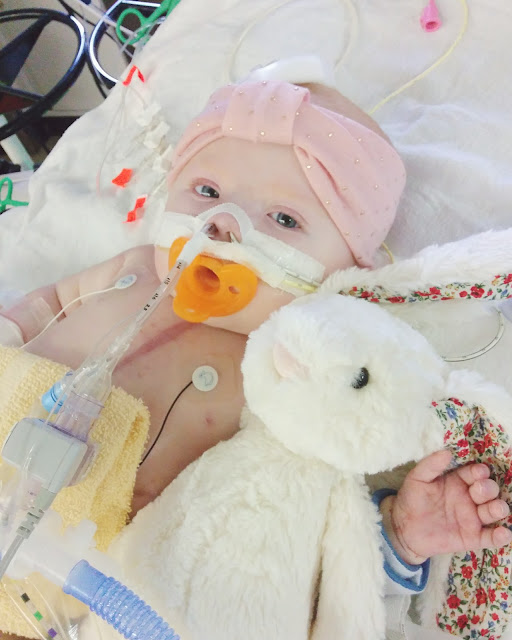 There is a reason I like to do stretches between my updates - things change so quickly from one day to the next, that it would probably leave readers even more confused then they already are, especially when trying to grasp all the terms and acronyms I already throw out left and right. On Tuesday we were facing the possibility of ANOTHER surgery in a short amount of time, but now they're wanting to get to a point of extubating Evanna to see if she will succeed without putting her through another risky procedure. {I'll explain later, so keep reading >}

So Monday night was ROUGH! I decided to go back to the hospital to see Evanna after supper while Nick went to bed. It had been an extremely long day that started at 5am for the both of us, and Nick was adjusting from getting off a night shift the previous night. Evanna was proving to be a difficult sedation once again, and was fighting the ventilator big time. They kept having to give her more and more drugs and even paralysing her so she would stop fighting the vent and get her CO2 levels back down to a decent level (they kept climbing to the 70s-90s, and normal is about 30). Her oxygen levels were constantly dropping and her heart rate was insanely high (190-210). I didn't end up leaving the hospital until midnight, so I fell asleep the moment my head hit the pillow.

When we came in the next morning, lots of IV drugs had been started during the night, which I wasn't surprised by at all considering the status I had left her in. She was really puffy probably due to a little inflammation, but mostly because of all the fluid she was on. They loaded up on Lasix in hopes that she would start peeing it off. They also decided to do another bedside bronchoscopy to look at her trachea, but the results weren't exactly favourable. Her airway still narrow and weak, and talks of the aortapexy began to swirl. They were also worried about her lungs and heart, so they did a CT to take a look, but it didn't show much difference.
They decided to email Dr. Rebeyka who was away to see if we should proceed with another surgery, and ask if he wanted to come back and do it himself, or let one of his colleges do on his behalf. The rest of the day was spent trying to keep Evanna comfortable, and while she did require she extra drugs (PRNs) every once in awhile, she was much more settled compared to the previous night.

On Wednesday, Evanna continued to vastly improve. The amount of PRNs needed to be given was less and less, and Evanna was starting to wake up without getting angry. She wasn't exactly making the best eye contact as she was still groggy and loopy from all the sedation she was on, but she was calm nonetheless.
We also heard back from Dr. Rebeyka who stated that he would really like to hold off on doing the aortapexy and see if we can try extubating Evanna successfully before resorting to more drastic measures. Nick and I liked this idea, because the aortapexy is very risky (we would be going back through and reopening her sternum, which isn't ideal when her open heart surgery was only 2 months ago). It's nice to hear that they want to give Evanna a chance to extubate before we consider another operation. Though there is still a huge possibility that the aortapexy still has to happen, the intentivists (Dr. Cave) would be more than happy to be proven wrong.

Yesterday Evanna was wide awake most of the day and constantly wanted to hold my hand. They only had to give her a PRN when they took out her drainage tube and move breathing tube. They also took out her urinary catheter and she handled it quite well. I gave her a sponge bath later later on in the evening and the nurses were constantly telling me what a sweet baby she is.

Today Evanna has been having a very good day sedation wise. Again she has been calm and happy when awake and is content as can be when I'm holding her hand (which makes it hard to write blog updates...). They were very happy with how Evanna handled the decrease in respiratory support they did over night and the plan is to continue to do so today. I'm always so anxious and nervous when it comes to changing her PEEP (this is the amount of pressure being forced into her airway), because while I hope and pray that she does well, I'm so nervous about being disappointed when she fails.
I guess that's our biggest hurdle once again - weaning Evanna off of the PEEP. It's why Evanna still may need a trach, but what they've hoped the last surgery would have fixed and what the aortapexy may also help with. I guess I would just ask everyone to pray for Evanna, and that her trachea/airway will continue to get strong. I know a tracheotomy is still a big possibility and I have already mentally and emotionally prepared myself for that scenario, but obviously I would be ecstatic if we were able to bring our little girl home with out a trach and vent.

Thanks for following along, and I will continue to update as I can!