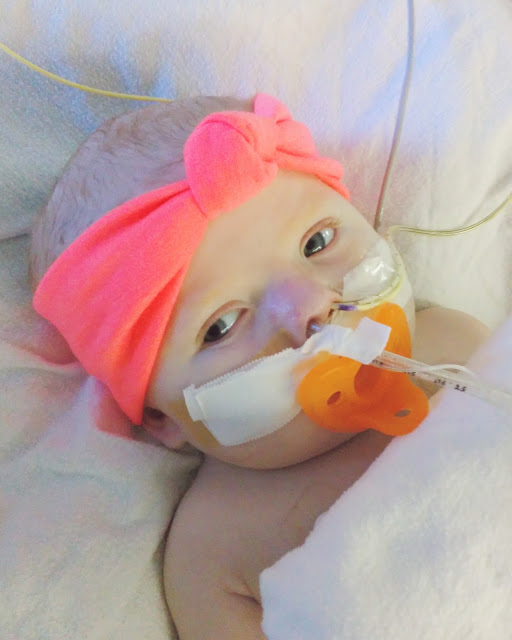 I remember back when Evanna was first born, I was so upset when they put an NG tube in (it was taken out a few days later because her feeding increased on its own), and I was devastated that she had a tube going into her nose. Though that was only earlier this year, it seems like a lifetime ago, and I just have to laugh when I think about it.

So in regards to Evanna, things are going incredibly slow, so please excuse the boring post. Yesterday we hit the 75 day mark of being in the hospital, which means 100 isn't that far away. I've already come to terms with that reality, so I'm okay with it. Since the end of November we've known that we'll be spending Christmas and New Years in the hospital, so I've had plenty of time to adjust to that, and if anything, it'll be a Christmas that we never forget.

I wasn't able to spend much time with Evanna yesterday, as the PCICU was shut down for parents for most of the afternoon. The PCICU closes on almost a daily basis (especially Monday - Friday) whenever they are doing a procedure on a patient or something is going down and they need the unit cleared. This is the one down side to an open unit, but it usually only lasts about 1-2 hours. Yesterday was a different story, as this time we were rushed out of the unit (normally we get a little warning), and it was closed for almost 5 hours. I don't know any details (privacy wise), but I do know it was due to an emergency situation with another patient. I know many people wonder how I'm able to remain relatively positive about our situation - but in the PCICU, Evanna is not the sickest patient in here. With the unit so open, I can easily see what's going on around me, and though we've been here a long time, Evanna is actually considered very stable. Other then a little bit of small talk, we don't see the intentivists except during rounds, and she's considered a nice "break" for the nurse that has been assigned to her for the day. We would seriously be home if it weren't for the fact that she is still intubated! Dr. Duff (one of my favourite intentivists) is on for the next week, and he joked that he should just skip doing rounds on Evanna because the daily changes on her is so minimal, it makes us impatient people antsy. So while it sucks that we're still in the hospital, I am GRATEFUL for the "health" of Evanna. There are currently so many babies on ECMO (life support) right now, and incredibly sedated. We get to at least interact with Evanna, encourage smiles out of her, have her grasp our fingers and talk to her. Today I even read a book to her for the first time, and I'm kicking myself wondering why I didn't do it sooner - she absolutely LOVED it! Thanks Grandma Sandy for bringing them to Edmonton for us!!

So while it sucks that we're in the PCICU, and we're going at an incredibly slow pace, I'm trying to remain grateful. I still can't wait to hold her again, and be home doing normal family things, but in the meantime with that not being possible, I will still count my blessings.

Evanna was completely put back on NAVA (!!! I love that machine) yesterday (they had her on NAVA earlier, but just for monitoring purposes), and Dr. Duff and the RTs have already made some decreases. During rounds I was talking about her PEEP and EDI levels, and the RT asked if I was an RT. I laughed and said no, and told him that I've just been here for a long time and so I've picked up on lots of things. NAVA is a fairly new, and Edmonton hasn't really used it before, so with our Calgary NAVA "experience", I almost know more about it then some of the RTs here at the Stollery. Dr. Duff also wants to change some of her IV drugs to oral ones, but wants to wait until tomorrow. We've learned that changes to Evanna have to be one at a time, as well as using small baby steps. Dr. Duff told us it's time to see if she'll sink or swim in regards to extubation ("just keep swimming"), and it may take a few weeks to see what she does. He also gave something to Evanna today to help her poop, as it's been over 4 days since her last dirty diaper!

As for side notes, Evanna now weighs 6.3kg compared to the 5.8kg that we brought her in at. I'm not sure if that's good for a 7 month old, but for a cardiac baby IN the ICU for such a long time - that's awesome! The nurses are constantly commenting on her chunky arms and thighs, and the fact that she is always warm (again, something they don't normally see with cardiac kids). Also, Evanna has started to become known for her adorable headbands, and some of the nurses come by on a daily basis to see what headband Evanna is wearing.

That's all for now!