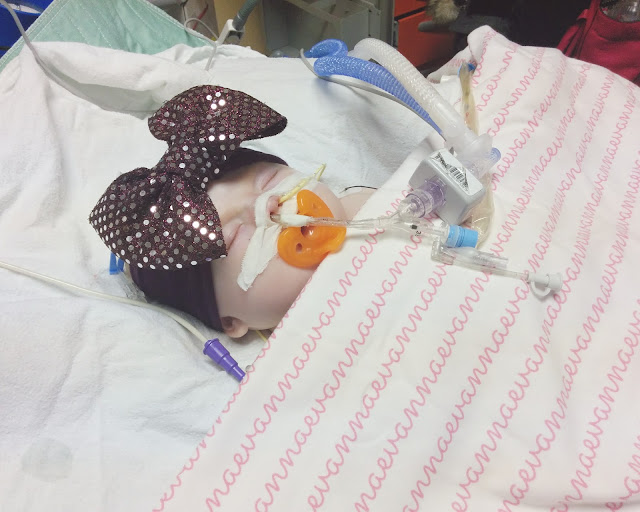 So it's confirmed - we'll be in Edmonton for Christmas, but I'm totally okay with that. I'm just soo happy to be back here in Edmonton at the Stollery Hospital, with our favourite medical team and I will be more than happy to stay here for as long as necessary. Though going home was good, and needed to happen, it made me appreciate the PCICU here at the Stollery so much more. Yes the private rooms at the Children's hospital are awesome, being close to friends and family is great, and there is nothing like sleeping in your own bed - but I would gladly trade it all to be in the best place for Evanna.

They transferred Evanna up to Edmonton back on Tuesday. Just before they packed her up, the Calgary team decided to adjust her ET tube (the breathing tube) and pulled it out by half a centimetre. Well, anytime someone adjusts her ET tube, whether pulling it in or out, it ticks Evanna right off. So they ended up giving her a whole bunch of drugs to calm her down, and I guess things just spiraled down from there. They had to practically bag Evanna the entire plane ride here and her CO2 levels were close to 100 (which is incredibly high) the entire flight. Our nurse Liz said she arrived looking like complete crap. I arrived about 30 minutes after Evanna did, and I have to agree that she was not looking so good when I first saw her, and that she looked absolutely awful. Within a few hours, after the nurses and RTs fixed her, Evanna was back to looking her pink self and was much more content.

On Wednesday, Dr. El-Hakim performed a bronchoscopy to take yet another look at her airway. He said that while she still as Tracheomalacia, he definitely agrees that there are other contributing factors to Evanna's breathing problems (lung and heart), and that even if we go the trach route, that necessarily won't fix all of the problems and wouldn't get us closer to going home. The bronchoscopy didn't really provide a whole lot of answers, and even Dr. El-Hakim wanted to wait and see what the Cath results would say.
I was really glad to see Dr. El-Hakim - he is such an amazing ENT, and comes by often to check on us to see how we're doing. You can tell he generally cares for his patients and wants only the best for them.

Yesterday was the big day. Evanna's Cath was originally slated for 10am, but anaesthesia didn't come until about 12:30pm to pick her up. They decided to sedate her in the PCICU before transporting her down to the OR just to make sure everything would go smoothly. I went and grabbed lunch, and finally around 3pm, Dr. Won came out to talk to me. All 5 of her collaterals have narrowing, and some are worse than others (particularly her left side). They decided to hold off on ballooning and inserting stents during this Cath, as they want to do another surgery and would prefer to do that after, as there would be a risk of the stents moving during surgery.

So that's the plan - another BIG surgery. She has been scheduled to be the first case bright and early on Monday morning and they have a few goals they wish to meet. They will be going in through her left side and want to "patch" her left collaterals. This will hopefully help make them bigger, and enable more blood flow to her left lungs (which is currently sitting at about 25%). Then they want to move her aorta and subclavian, and provide more space around her trachea. From the looks of it, her aorta and subclavian are sandwhiching her poor little trachea. They'll do another Cath after surgery, in which they want to insert a couple of stents. Then they want to let her recover for a little bit, and give her another shot at extubation. Edmonton is a little more reluctant to teaching Evanna, and though she still may end up with one, they want to try every avenue possible before we're sure it's the right decision.

Evanna has been pretty much sleeping the whole day, and I feel it's going to be a very quiet weekend around here. I plan to maybe do a little shopping and buy a few things to decorate her crib with, and maybe find a few Christmas outfits/hats to put on her.

It's a little stressful knowing that Evanna will be having another major surgery in such a short span of time, but if it's what will help her little heart and her lungs, then so be it. Prayers for Monday would be greatly appreciated.