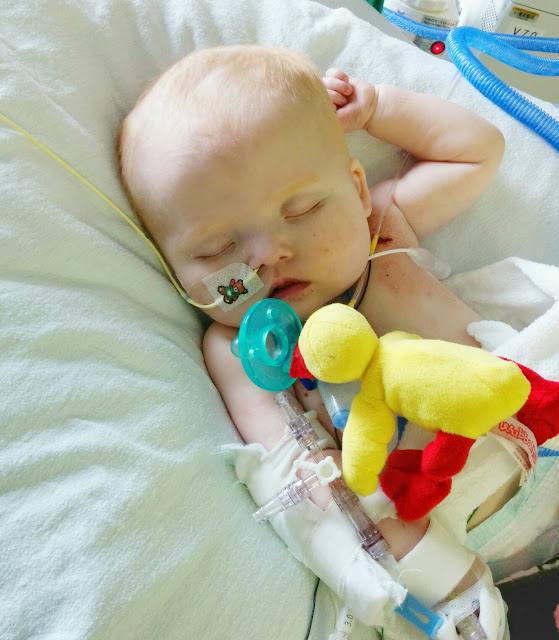 With everything that's going right now, I wish I wasn't so behind in posting. Despite Evanna's INR level being extremely high, her mechanical valve clotted again and we're not really sure why. Dr. Guerra's best guess is that her valve is infected, but at the moment we don't have anything to confirm that. Though Evanna was technically placed on ECMO alert yesterday as a precaution, she is very stable, and so please excuse the long post going over the last 10 days or so.

Here's what's been happening over the last week (and a bit):
After "priming" Evanna's stomach with some feeds last Wednesday and Thursday (April 1-2), they pulled her NJ back into an NG and began feeding her at 10ml/hr. She tolerated that well, so after 12 hours they increased it to 20ml/hr. Unfortunately Evanna had a major vomit 4 hours later and it was a terrible night as they had to suction her, reinserted the NJ (not an easy task), and keep her calm. Dr. Ryerson was on that night, and she stated that if Evanna can't handle NG feeds, then we're looking at the fact that she may need a G-Tube, which means that because it's another surgery, we're buying ourselves another month in Edmonton. Nick and I both stated that we definitely wanted to try NG feeding again, but we should definitely go at a slower pace. 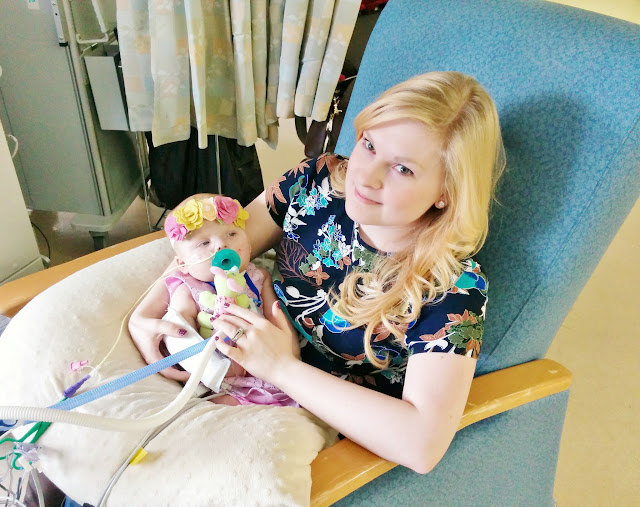 On Easter Sunday, they re-pulled back her NJ into an NG, and we began at 10ml/hr and decided to do smaller incriminates, and only increase every 24 hours. Though it was an emotional day for me due to the fact we were spending another holiday in the hospital, it was still a good day, as Evanna was doing very well and I got to hold her lots. The unit was relatively quiet and empty due to the long weekend, and Evanna's nurse and I had a lot of fun dressing her up in her Sunday best and playing with her. 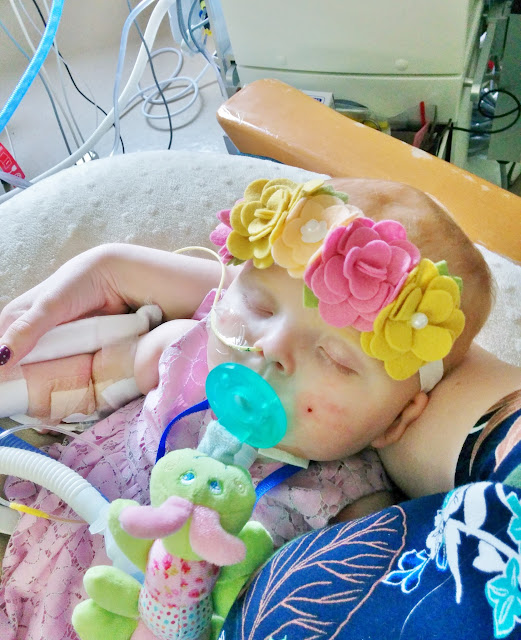 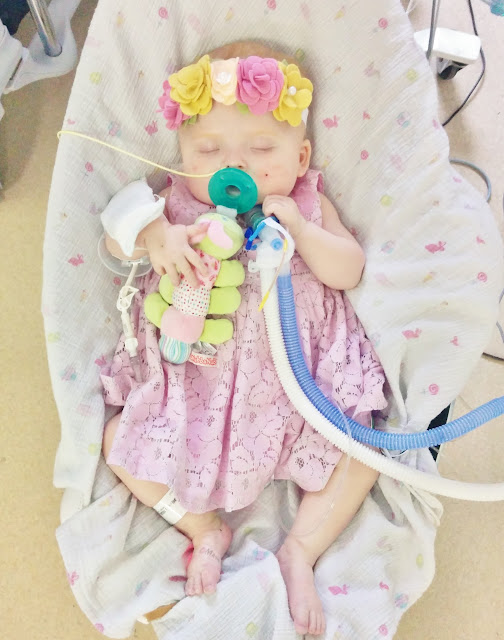 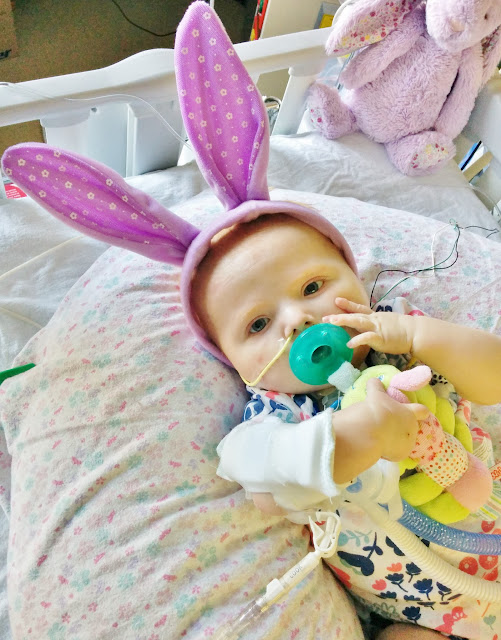 The rest of the week was spent increasing Evanna's feeds and lowering the ventilator support she was on, all of which she handled beautifully. Nick brought up Evanna's activity mat from Calgary that she use to play on before surgery, and Evanna just loved playing with it. She also began to "self-wean" herself off of the sedation medication she was on, as she made it really easy for the intentivists to decrease a lot of the medication she was on. She was so sleepy some days, and the only way to fix that, was to decrease the amount she was on and how often she was getting all her drugs.

On Wednesday night, Nick and I decided to somewhat celebrate our anniversary. Originally we were suppose to go to Canmore, but because Evanna was so awake, and we were still in Edmonton, so we decided that Canmore can wait, and just find a way to celebrate here. I booked one of the really nice suites at the Fairmont Hotel McDonald and a massage for myself (Nick had NO interest in getting a massage for himself lol). It ended up being a really lovely evening, and while we did have our cellphones on us in case the hospital called, we left them alone and enjoyed each others company. We had dinner at the restaurant there, took a swim in the swimming pool and the next morning I went for my 90 minute massage. I've been meaning to go for a massage for a while now (as I was really needing one), but I'm glad I finally went and had one. Between the not so comfortable beds at the Ronald McDonald House here in Edmonton, to sitting in not the best chairs everyday beside Evanna's beside, my body has taken a beating over the last 6 months. Overall, it was a wonderful evening and morning with Nick, and it gave us a chance to rest and regroup. I don't even think I took one photo (I know - total shocker!)

My parents came up on Friday as I wanted to make a quick weekend trip down to Calgary to see some friends for a birthday party and sleep in my own bed. Evanna was really stable, and my parents had been dying to come up and hang out with her. After spending Friday morning with Evanna and getting as many smiles out of her that we could, we left Edmonton and headed back to Calgary. The plan was for me to come back today and then for Evanna to be transferred to the PICU at the Alberta Children's Hospital sometime between Tuesday and Wednesday, depending on when they had a bed and a transfer could be arranged. On Friday evening Nick and I went for dinner in Okotoks with Nick's family to celebrate his brothers birthday after getting back to Calgary, but had an early night as Nick had to work the next morning. Yesterday my sister came over and I finally got to meet my new nephew Dax for the first time since he was born 6 weeks ago (he was born the day after Evanna was airlifted back to Edmonton via STARS air ambulance). We then went for a late lunch at Open Sesame for our friends birthday, and it was just so great to see some of my friends again and in person.

Unfortunately, my meal was interrupted by a phone call from the hospital, and it wasn't good news. Dr. Guerra had called to say that even though Evanna's INR was really high (it was actually too high at 6.3, when we normally want her levels to be between 2.5 - 3.5, which meant that her blood was very "thin", and would take a very long time to form a clot), her mechanical valve clotted again, and they're only guess is that maybe the infection she had a few weeks ago affected her valve. I was incredibly heartbroken and had a hundred questions running through my mind. It's also the weekend, and so though Dr. Rebeyka was made aware, it took a little while to come up with some sort of plan. They brought up TPA (that "clot busting" drug that we've used in the past), and said they might start her on it. I asked if they needed me to come back to Edmonton immediately, but Dr. Guerra assured me that other then a high fever, Evanna was stable and doing well. She had been puking a little bit, so they lowered her feeds and also increased her ventilator support, as they didn't want make Evanna work any harder than she had too. I quickly called Nick at work and filled him in with the news. I decided that because nothing was happening that day, and that because Evanna was doing very well otherwise, to still stay in Calgary and get one last good sleep in my own bed, as I have no idea as to when I'll have another opportunity to do so again.
Dr. Guerra did call me again to say that though Evanna was really stable, they know things can change in an instant, so they want to place her on "ECMO Alert", only as a precaution. It was more to just ensure that blood was set aside for her, and they had everything ready in case Evanna were to decline quickly. He again reassured me that I was okay to stay in Calgary for the night, and that he would call me if her status were to change. They also had Dr. Massicotte (Kid Clot/hematology) come into the hospital to help write up the TPA orders for Evanna, and get her Warfarin/Coumadin reversed. He reiterated what I already knew, and that a transfer back to Calgary this week was completely off the table. He also stated that this was definitely not an anticoagulant issue, and that maybe her valve was infected.

I drove back up to Edmonton early this morning, and Dr. Ryerson filled me in with everything that's been going on the last 12 hours or so (I called this morning only to check that Evanna was still stable and doing well). They all agreed that the mechanical valve has to come out, however our surgeon is currently away, so it may have to wait. They decided to start her on some TPA for 6 hours and we are going to try and keep her stable for the next week until Dr. Rebeyka is back. Obviously if something happens and they need to do it sooner, one of the other surgeons can do it, but because Dr. Rebeyka knows her heart best, they want to wait until he's back.

It's been an emotional 24 hours and I'm beyond devastated. We were so close to coming back to Calgary and working towards coming home for good. We are now facing another open heart surgery in about a week if Evanna cooperates (sooner if she doesn't), and we will DEFINITELY be in Edmonton for Evanna's first birthday. It's Sunday, so I still don't have all the details. Heck, there has been SO much information thrown my way, my head is spinning and so I'm sure I've left details out. I'm going to try and catch my breath tonight, and do an update tomorrow once we have more of a plan and the intentivists reiterate a few details to me again. I've asked that Dr. Cave (our primary intentivist) be contacted and filled in with all the details, and hopefully I will get a chance to talk to him tomorrow.

I decided to bring up to Edmonton the birthday cards that we've already received in the mail, as I still want to open and hang them close to Evanna's bed. If you haven't sent one, you still have time. There are still 16 days until her birthday, and I will be making arrangements for any additional cards that arrive over the next few weeks to get to Edmonton for her birthday. Please click HERE for more information, and the address to mail the birthday cards to is listed in the event description. Again, please feel free to send a birthday card, share this event and invite your friends and family.