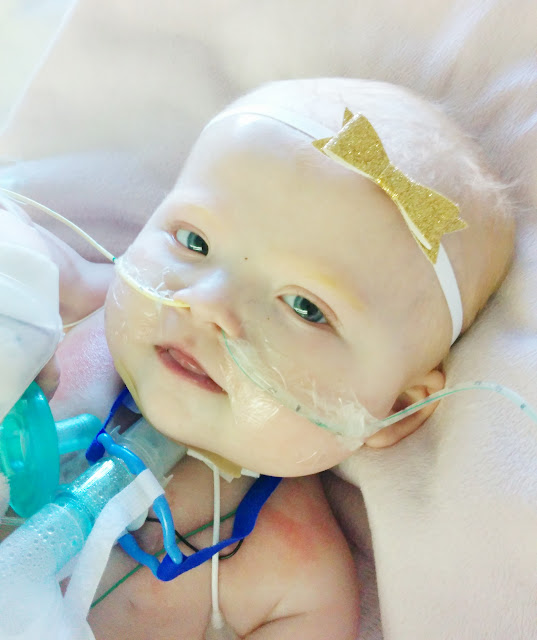 So we have a surgery date. In my last blog post, I mentioned that it wouldn't happen until next week, and now we know it will happen on Tuesday (April 21 - which falls on Day 198 here in the PCICU...). Though Dr. Rebeyka is back tomorrow, he actually isn't doing surgeries until Wednesday - which meant that unless Evanna were to deteriorate quickly, they wanted us to wait until then. However, yesterday morning I found out that Dr. Rebeyka emailed one of the other surgeons and asked if he could switch OR times, and so now he is now able to do Evanna's surgery Tuesday afternoon instead of Wednesday morning (which was the original surgery date). The initial news of having to wait that long definitely sent me over the edge last week. It was really hard information to process - and though it's "just another week" - it's still another week tacked onto this already long journey. We were finally working towards going HOME, and so this giant step backwards (that sometimes feels like 20), has been incredibly overwhelming.
I've had a few moments where I wanted to ask if one of the other surgeons could do it (because in all seriousness - all 3 pediatric cardiovascular surgeons here at the Stollery are just outstanding and top notch), but there is a reason they would really like to wait for Dr. Rebeyka to do it. He knows her heart, literally inside and out, and other than her tracheostomy, Dr. Rebeyka has done every single surgery on Evanna thus far. Also, during Evanna's last open heart surgery, Dr. Rebeyka did a "pexy", and pinned her conduit and aorta to her sternum to lift everything off of her trachea, which helped open her trachea right up. Only he will really know where all the sutures are, and where to cut, because HE is the one who put them there. So for safety reasons alone - it's best that we wait until Dr. Rebeyka is back. At the end of the day, we do want Dr. Rebeyka to be the one to do the surgery, but my impatience was getting the best of me. 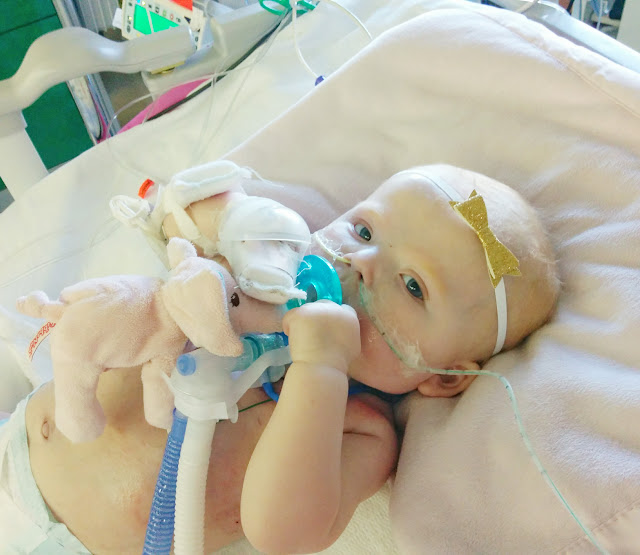 The last week has been relatively quiet - which is exactly what we wanted for Evanna. I did my first official trach change on Tuesday, and it went very smoothly and I didn't run into any problems. One of the tasks that Nick and I have to complete before we can take Evanna home, is learn how to do a trach change. So now Nick just has to do his (which I'm sure he'll do just fine), set up homecare and we'll be good to go to take Evanna home when she's ready!
With a little bit of time on my hands over the past few days and Evanna so stable, I've been able to bug the unit about getting a few things done and ordered. First, I've been desperately wanting a different kind of trach ordered for Evanna. It's one that has been suggested to me by MANY fellow trach moms. It's way nicer - especially for babies with "no necks", and I was encouraged to look into it and get it ordered for Evanna. I brought it up to Dr. Eksteen (our ENT) the day after Evanna's original tracheostomy surgery, and he told me that he had no problem with her having it, and approved it to be ordered. The problem is it takes weeks to get in, and with the plan to be transferred back to Calgary, they asked that I just wait until we got back to Calgary to order it. Now, with our major delay in transferring, I asked the RT manager here at the Stollery to order it, and after a few days of trying to find the right one, has finally ordered 2 for Evanna.
Secondly, the leads (these read Evanna's heart rate) have been leaving rashes on her skin for the past 6 weeks, and no matter what we do, it has continued to be a problem. I stated that other leads have to exist, but sadly the Stollery had no other ones available. A few days ago, one of the aids on the unit said that if I knew of another kind of leads, they would gladly order some for Evanna. So I scrolled through some old photos of Evanna, and noticed that while we were in the NICU down in Calgary, Evanna had different leads on. I showed the aid the picture, and a phone call was made. Calgary happened to bring up a patient up to Edmonton, so they packed some of the leads they had, and gave them to us to try on Evanna. We've been using them for 4 days now, and Evanna's skin looks amazing - so the unit has put in an order for some more of these better leads and hopefully they get here soon. What's really awesome is that the wound care nurse stated that other patients currently in the Stollery NICU and up on the floor have also been having problems with the current leads, so once the new leads come in, they'll make sure to use them on those patients too!

Our only issue over the past few days is that Evanna has been a little on the tachy side (meaning her heart rate is high). At one point they did put her on ECMO alert again as a precaution, but they retook her off of it within 12 hours. It's been a "hurry up and wait" kind of week around here, and I'm looking forward to getting this surgery done and over with. In my opinion, Evanna is a bit of a "ticking time bomb", and we're kind of just crossing our fingers that her mechanical valve will not give out before Dr. Rebeyka is able to get here and take it out. In the meantime, Evanna and I have just been hanging out, reading books, playing with toys and I've been getting lots of smiles out of her. In regards to her ventilation, we did have to go up on the settings last weekend, but we've been able to come right back down, and she's on the lowest settings she's ever been on.
As I mentioned on Facebook earlier, our family was recipients of a very kind act of generosity. Gerry Forbes from CJAY92 radio called us Friday morning and stated that our family had been nominated for their "Secret Wish" program, and they had some very special gifts for us. They mentioned toys for Evanna, gas, grocery and credit gift cards for us, along with some movie and dinner vouchers for some much needed date nights. This sweet act of kindness has lighten our load and put a smile on my face. Thank you to those that nominated us, and I'm just in constant awe of the love and support that our family continues to receive without even having to ask. 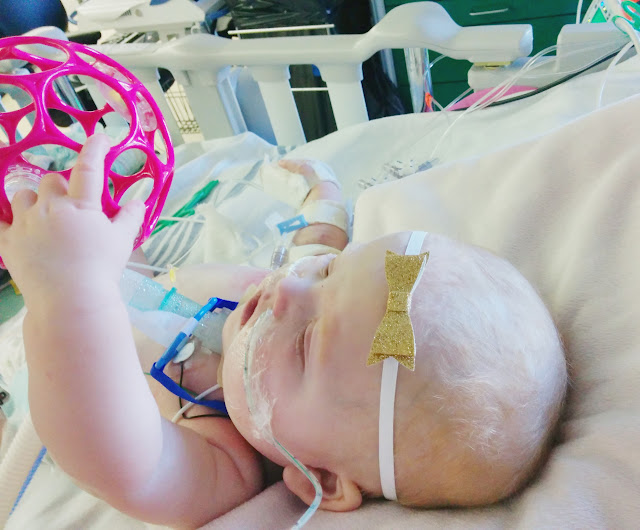 Evanna will be going for a CT Angiogram tomorrow so they can get a picture of where some of those pexy sutures are. Though Dr. Rebeyka did them, I'm sure a reminder of where he put them wouldn't hurt. She's already had her presurgery ECHO, and they just want to do this before opening Evanna back up. It's a big week, so extra prayers will be much appreciated. Specifically, we needs prayers that her CT Angiogram will go off without a hitch, and most of all, that surgery will go smoothly and no complications arise. I so badly want this recovery to go fast and smoothly, and it still breaks my heart that this is all happening just one week shy of Evanna's first birthday. No mother ever pictures a birthday in the ICU - especially their child's first birthday. Yes Evanna technically won't remember all of this, but when I pictured Evanna's first birthday, this was definitely the last place I pictured it to be. Regardless, I'm going to make the best of the situation, as her first birthday is a milestone worth celebrating. 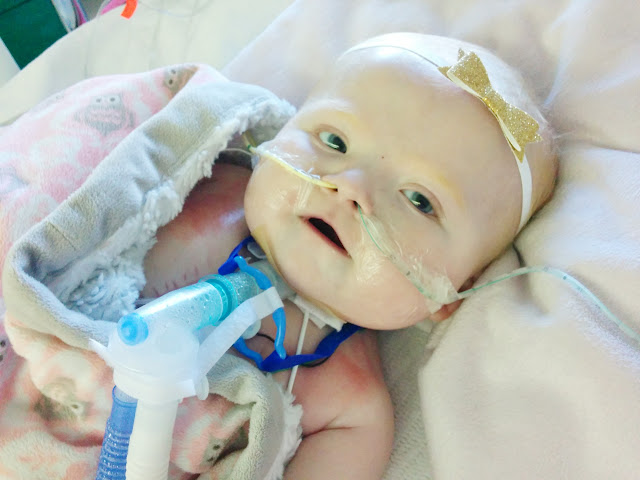 Only [[9 Days]] until Evanna's birthday. I can't WAIT to show you the incredible birthday card wall that I've been slowly creating with all of the birthday cards being sent to Evanna. The medical staff are in complete awe of it, and are amazed at how popular our little girl is. Many have stated that it completely brightens up the PCICU, and just love all the different and unique cards that are coming in.
Due to surgery, we have officially decided to delay the celebrations until May 9 »» so there is still PLENTY of time to get your birthday cards mailed (19 days to be exact)! Please click HERE for more information. The address to mail the birthday cards to is listed in the event description.

If you can't/haven't sent a birthday card, but would still like to send your wishes, feel free to upload a PUBLIC photo (so I can see it) on Instagram or Facebook, use the hashtag #Happy1stBirthdayEvanna and tag me in the photo so we can see it! Even if you have already sent a birthday card, feel free to virtually send your wishes and show your support. Thanks so much! 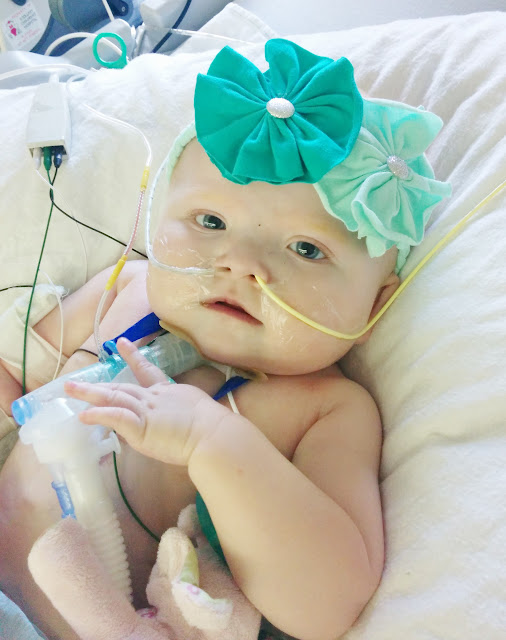