So Evanna is recovering well... however, she is definitely letting her feisty redheaded personality shine through and has made it known that she is not a happy camper. A few hours ago, they switched out her ET tube for the trach in hopes that it will make her happier, but she is still needing to be heavily sedated. When she was intubated, she would bare down and desat (her oxygen levels would decrease) really bad whenever she woke up. While she hasn't done that since she got her trach back, she is still a mad little goobers. We're hoping for a quiet night and if all goes well, they'll take her chest tube out tomorrow, which will hopefully make her more comfortable. 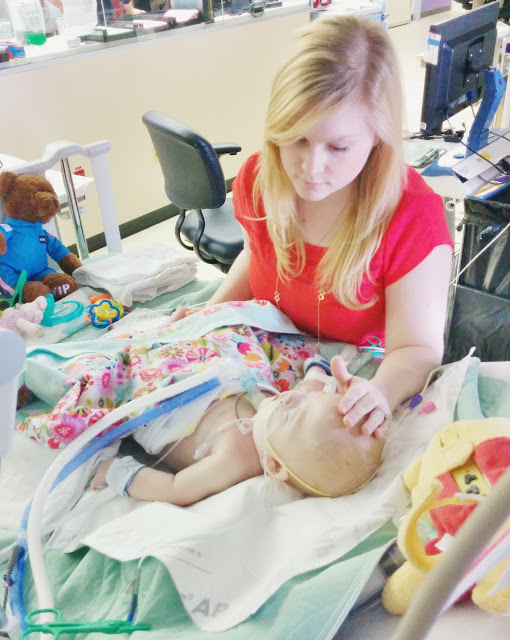 
It's been such a busy day for Evanna - but all of it was positive! They took out her chest tube and pacing wires this morning and we went back to her original ventilator settings that she was on prior to surgery (mind blowing in my opinion). We've been able to drastically come down in a lot of her sedation medication, and overall she's doing so much better then compared to yesterday. She has a ways to go still before we're back to her base line, but we're a lot further along than I thought we would be. Last night they restarted feeds and she has been tolerating that very well.

On a side note - during surgery they found some areas that contained puss and sent swabs to the lab. It has all come back negative, so they'll be stopping her antibiotics that she was on prior to surgery this Saturday. They're very happy with her progress today, and if she keeps this up, we could actually be home (well back to Calgary at least), before we know it!

Nick and I spent the day opening more birthday cards for Evanna, and words like "grateful" and "humbled" can't even begin to describe how we're feeling with the support we've received over the last 6 months. To know that SO many people care, pray and think about our little girl around the WORLD is just amazing. When I open cards from Australia, New Zealand, Singapore, Belgium, Germany, all over the USA and Canada, the staff here in the PCICU at the Stollery are just in awe of the impact that little Evanna has made and the lives that she has touched. The power of a beautiful story and social media can do some incredible things.

We've opted to delay in celebrating Evanna's birthday until the beginning of May, so if you haven't sent a birthday card - know that you still have time (click HERE for more details, and the address to mail your card too)!

From the bottom of our hearts and Evanna's special one, thank you again for the love, kind words, birthday cards and most importantly »» prayers!