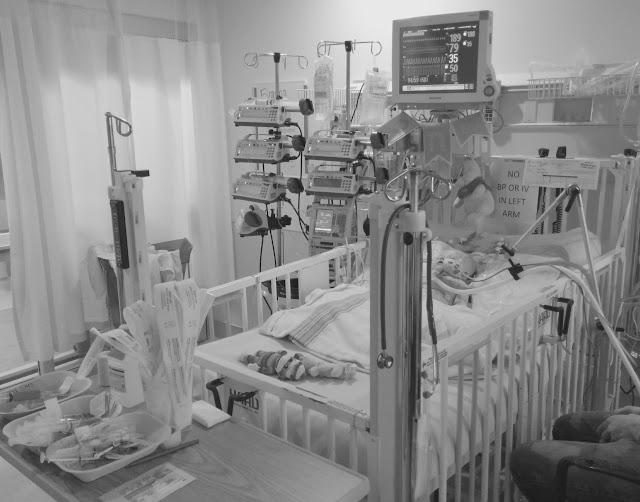 We've had a few miserable and terrible days around here. We don't really know what's going on, but something has definitely been off and we're emotionally and mentally exhausted. Earlier this week the medical team, Nick and I thought it was withdrawals, and while that may be a small contributing factor, we think something else is going on. The biggest issue has been Evanna's very high heart rate. On Tuesday, her heart rate had been above 200, and we're still not exactly sure as to the cause of it...

It all started Tuesday, and because we had been weaning her sedation medication by quite a bit since we arrived back to Calgary, we immediately thought that Evanna's agitation, gagging and heart rate were all due to withdrawals. It was an awful day all around, and I didn't leave her room once until supper time to finally get some food inside me. They were still able to do a home ventilator trial that day, and she actually did incredibly well - even better than expected, so at least there was some positive things happening.

Evanna improved a little bit on Wednesday, and so we were able to continue with the home ventilator trials. She again did very well, and so we became very optimistic of her progress towards being completely transitioned over to the home ventilator and working towards transferring out of the PICU and onto a regular hospital ward. Evanna wasn't quite back to her old self, and I think smiled for Nick once the entire day. 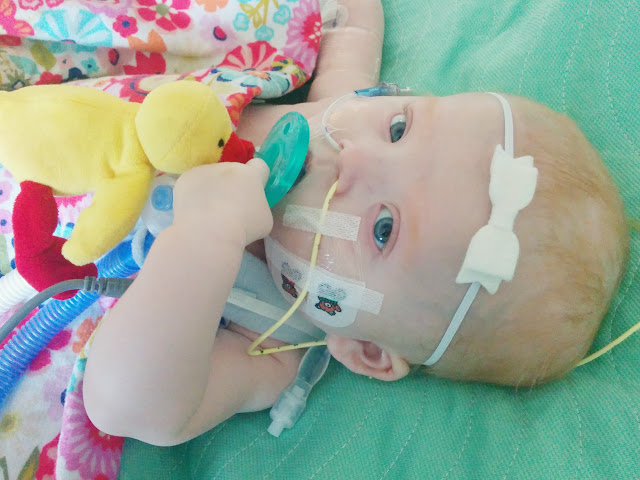 Thursday seemed to bring just more agitation and a continued high heart rate. Evanna was extremely unsettled and irritable and the medical team was at a slight loss as to why she was behaving the way she was. We were giving her extra doses of sedation medication when she needed it, all her lab work had come with negative results for infection, her ECHO (ultrasound of the heart) hadn't shown anything of significance, and we hadn't weaned any drugs for days. To help the heart rate they gave Evanna some extra boluses of fluid and started antibiotics as a precaution. The cardiologist on call thought that maybe Evanna was a little spetic and dry, and after the extra fluid and antibiotics set in, she seemed to settle out a little bit and her heart rate came down slightly later that evening.
Things finally seemed to have turned around yesterday (Friday), and I was extremely hopeful for an awesome Mother's Day weekend. Though the day started out with Evanna's heart rate a little high again, they decided to switch her over to methadone from hydromorphine in hopes it would help her wean better, and by 7pm Evanna's numbers (heart rate, O2 saturation, etc) were looking beautiful. 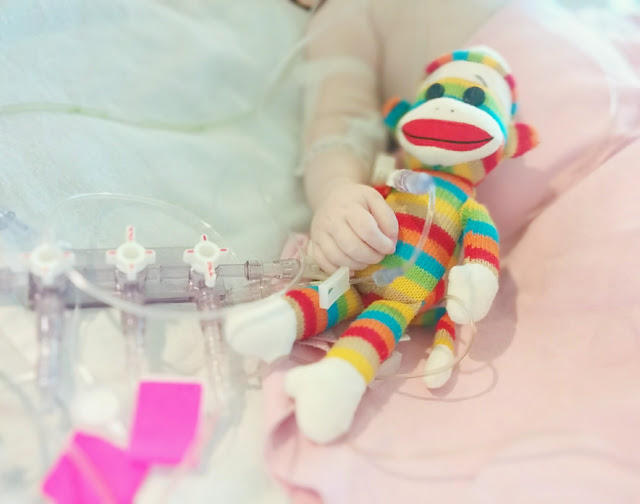 Today Nick and I decided to take our time in getting to the hospital this morning. Nick had just gotten off from a night shift and all was well at the hospital. I called the PICU around 11am to check in on Evanna, but was told the nurse was busy cleaning up a massive poop explosion. I was told they'd call me back with an update and that was the end of our conversation. I finally got a phone call around noon, but it was someone telling us that we should make our way to the hospital as soon as possible, and to drive carefully. All we were told was that Evanna was "air hungry", she was very tachy (high heart rate) again, and the intentivists were in her room. We grabbed the rest of our things (we were suppose to attend a wedding later on tonight), and just decided to finish getting ready at the hospital when things calmed down. While I knew things weren't good, I honestly thought it was Evanna just being irritable and unsettled and so I wasn't too concerned while we were driving to the hospital. When we got there, the hallway was filled with different supply carts and her room was filled with gowned-up staff. I immediately knew how wrong I was, and just how critical the situation actully was.

We learned that Evanna's lactate had somewhat climbed, her liver was enlarged, and by looking at the monitor, her heart rate was well above 200. They said they initially had a really hard time bagging her, and it was difficult to move her chest up and down. Her blood pressure was also making swings from a little high to a little low, so they have been turning epinephrine on and off throughout the day. An xray and ECHO really didn't show anything of significance, but they were concerned about her little heart collaterals (this is what makes Evanna's heart so special and complicated) narrowing. Labs results came back and showed that her PICC line was infected, so that will definitely have to come out now. This PICC line has been in since the end of October, and so I guess it's a little disappointing that it's now causing problems. It has been such a great line and was still working great, so they'll probably end up placing a new one later this week.
They decided to put a new central line in, and asked Nick and I to leave so they had a sterile environment to work in. It took almost 3 hours for them to find a suitable spot and place the central line, as poor Evanna's body has so many holes in it, and there isn't much "real estate" to work with for lines. Once we were allowed back into the unit, we were able to speak to the intentivist on the plan moving forward. Dr. Doughty is hoping Evanna will stable out, and "let the dust settle". He and the cardiologist on call reviewed everything and contacted Edmonton for their input. At this very moment, our best guess for Evanna's quick decline in health is an infection. Other tests haven't shown anything, but they are still slightly worried about her little pulmonary arteries as they're hard to assess by ECHO. We of course talked about and discussed a transfer back to Edmonton, but as of right now, it's not a really good option. While we may want to do a cardiac cath in the very near future, Edmonton wouldn't do one right now because of Evanna's current infection. So because of Evanna's poor stability, and there is nothing Edmonton would do at this very moment that Calgary can't do, there is really no point in transferring Evanna back up to the Stollery at this time. This option is not off the table, and we definitely have to keep it in the back of our minds, but there is currently no benefit to transferring Evanna right now and it would only put Evanna at greater risk.
Dr. Doughty has also decided to put another arterial line in Evanna to better monitor her, but after 4 hours they have been unsuccessful thus far. She hasn't been ventilating very well this evening, and so they've also had to continue to sedate and paralyze her to keep her stable.

It looks like we're going to be in for a very long night. Things are still pretty critical, so please keep Evanna in your thoughts, hearts and prayers.