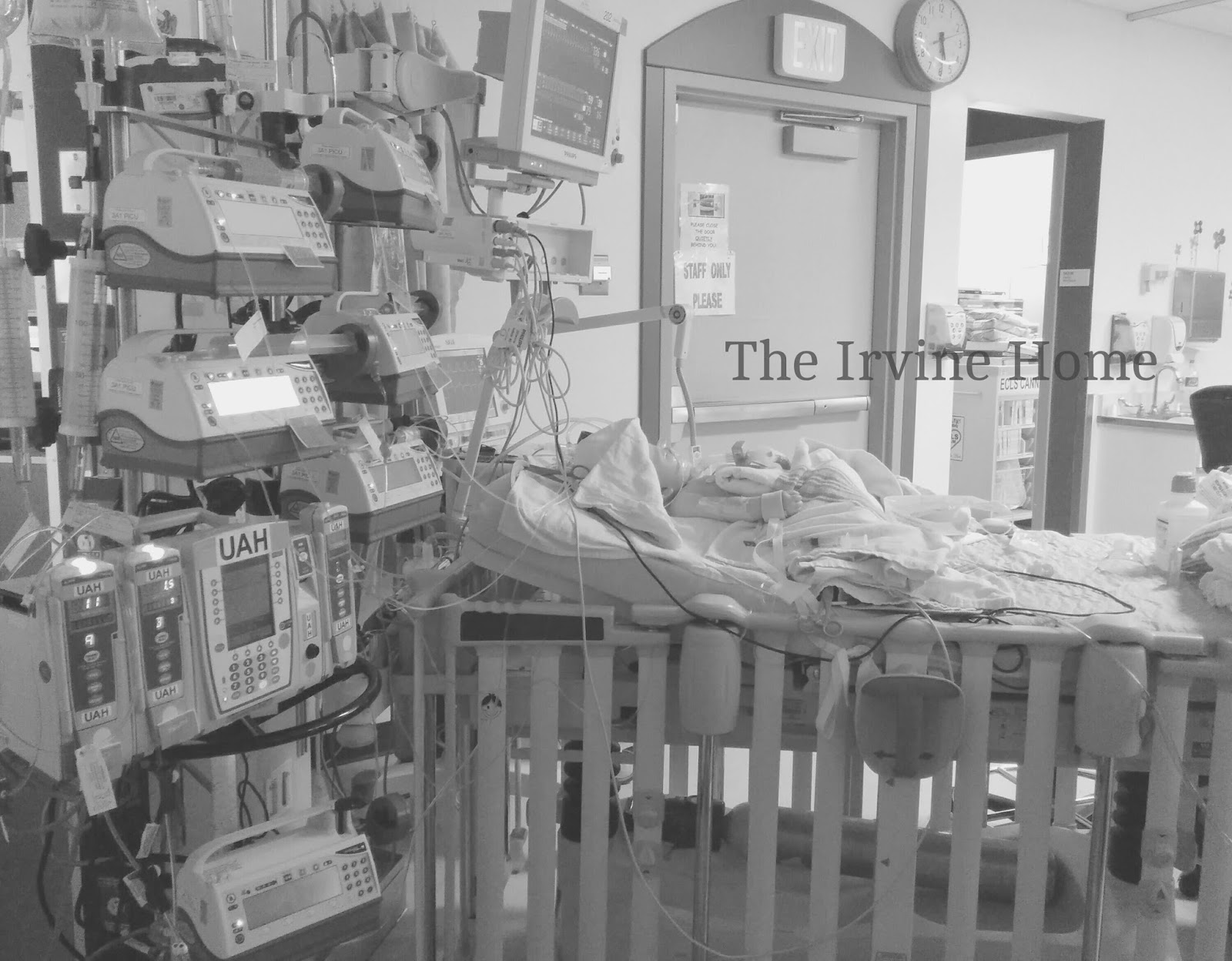 It's been a hurry up and wait kind of day, and we still don't know much more than we did yesterday. Unfortunately Evanna is still being kept very sedated, and even paralyzed at times. When Evanna is "sleeping", her numbers look great and is relatively stable. However, the moment Evanna wakes up, she starts to fight the ventilator and becomes extremely difficult to even bag for the RT's. That then causes her heart rate, CO2 and blood pressure levels to rise, and the only way to temporarily "fix" the situation is to give her some more sedation medication and even paralyze her.

This morning they did a CT Angiogram and Lung Profusion test. It did show some slight narrowing of her pulmonary collaterals (this is what makes Evanna's heart complex and severe), but it still doesn't really explain why Evanna can't handle being awake. It may be a contributing factor, but not enough to explain for the way she's currently acting. We're also discussing possibly another cardiac cath (major diagnostic procedure) to maybe balloon some of those collaterals, but they won't do one until Evanna's blood cultures show no signs of infections for at least 72 hours.
There are a few things that I'm hoping to get accomplished over the next 24 hours. I'm already on the PCICU case about leads and have talked to the wound care nurse a few times today - so I think that's finally taken care of. I'm practically kicking myself for not grabbing a pile of nicer leads from ACH before Evanna got transferred, but the transfer honestly happened so quickly and I didn't have much time to think about everything. In the meantime they're just going to move the leads around Evanna's body and apply some hydrocortisone cream to those areas.
Next is we NEED to get Evanna's PICC line sorted out. There is a lot of confusion over whether it needs to come out or if it can stay in. Hopefully we can have some clarification later tonight during rounds.
Finally, Nick and I were discussing at what could possibly be causing Evanna to be so irritable and angry when she wakes up. In the past, the intentivists have put her on some antipsychotic medication to help deal with delirium, but has since been taken off of it while we were back in Calgary. All of Evanna's sedation medication have been practically doubled from last weeks doses, and so I'm sure it's a legitimate theory.

With miss our little girl. It's just so hard to believe and fathom that just last week Evanna was doing so great, smiling and doing home ventilator trials. Now she is puffy and asleep, so it's a little heartbreaking just sitting here at her bedside, unable to do much.

Thanks so much for the massive Facebook support. It hasn't been even 24 hours, and we've already surpassed a 1000 likes. If you haven't done so yet, and would like to continue to get updates, please click HERE or search "The Irvine Home // Evanna's Special Heart" to find our Facebook page.