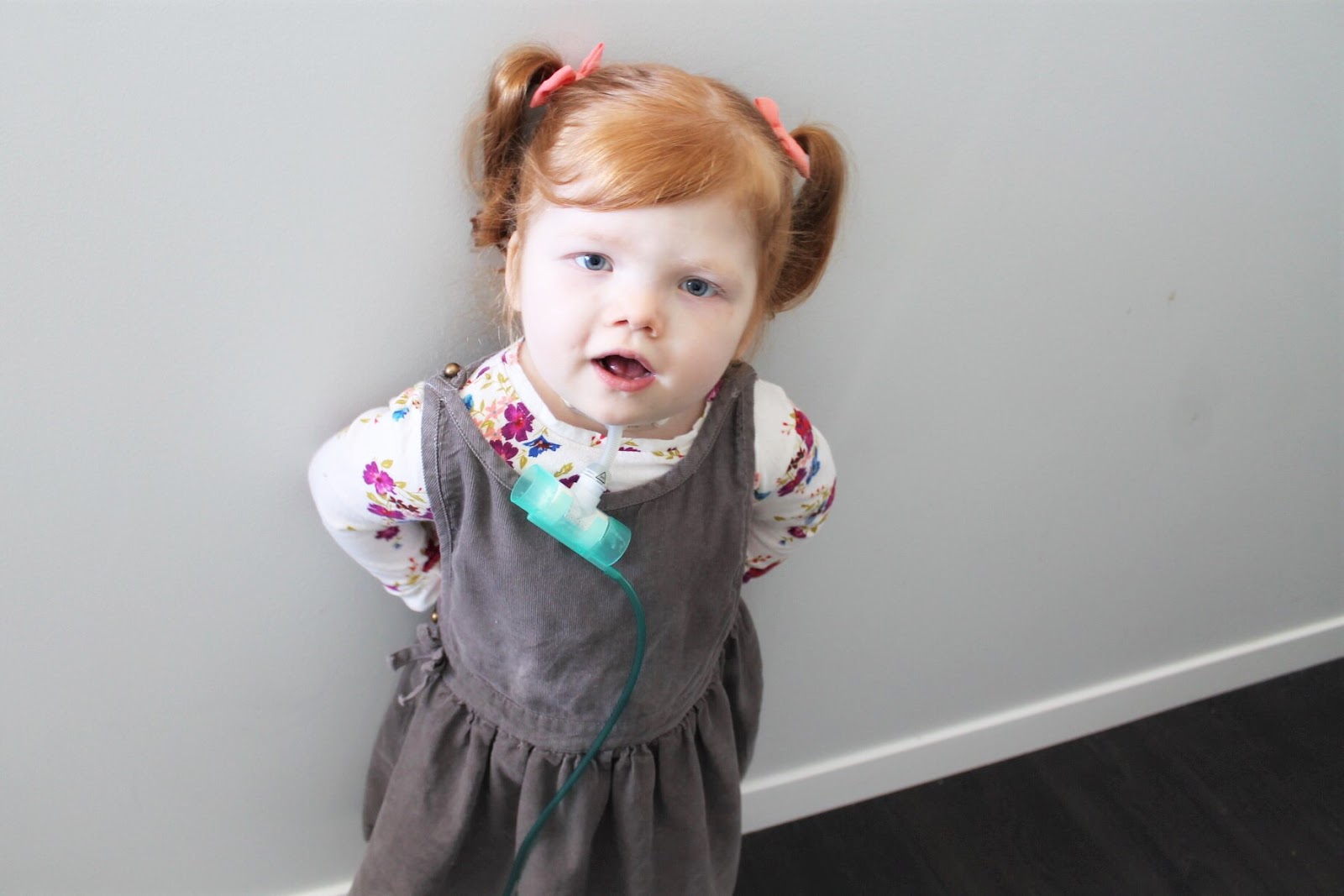 Well another year has passed us by, and not only have we survived this thing called #trachlife -- but feel like we’re in fact thriving. We still have a little ways to go before we can seriously consider decannulation (take the trach out), but we have made a TON of progress over the past year, and this progress has been so great for improving our quality of life too! Just after we celebrated our 2nd tracheoversary last March, we were admitted at the beginning of April for a bronchoscopy to see what Evanna’s airway looked like and were ecstatic to hear that her tracheomalacia (“floppy airway”) had finally cleared up, and she was ready to make weans off the ventilator.
Due to how long Evanna has required ventilator support, it hasn’t been a quick process, but she’s been able to work up to all day sprints off the ventilator, and we’re now going to see about weaning her off during the night in the coming months.

This past Wednesday, we received a call from the sleep clinic and were informed that Evanna is scheduled for a sleep study mid April (I have to laugh, as we seem to have a pattern with mini hospital admissions and the month of April over the past few years…) and are currently making appropriate plans and arrangements for this study. Nick and I are trying to decide who will stay with Evanna at the hospital that night (as one of us HAS to be with her the entire time), and who will stay home with Bennett (as he’s bottle fed, so it doesn’t necessarily have to be me), but still has to get up at 6am and help bring Evanna home the following morning. Regardless, neither Nick or I will get a ton of sleep that night, but we already have a nurse booked for the following morning to lend a hand around the house and hopefully allow us to catch up on some sleep. The sleep study does currently land in the middle of Nick’s day shifts, but he’s going to try and request one of those days off, as we unfortunately have very little leeway with study date options due to Evanna’s trach, it has to be on a day they can schedule an Respiratory Therapist. 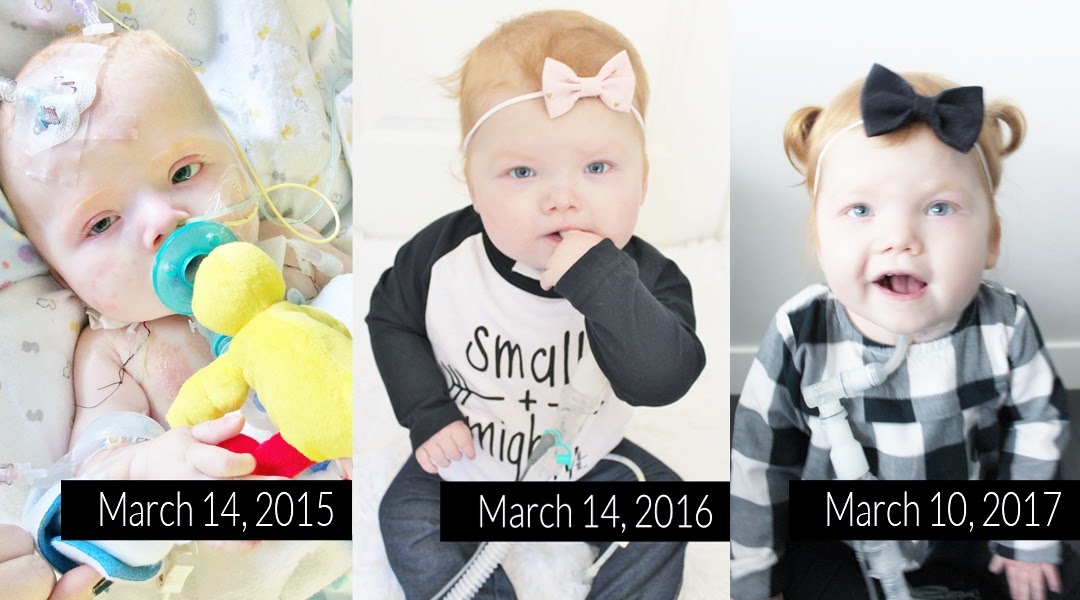 Overall, things continue to get easier as we move forward. We don’t have to lug around her home ventilator when we venture out for the day -- which honestly has made a huge difference, and it has made it slightly easier to take Evanna out of the house. We still have to cart around her large oxygen tanks (she still goes through one of those large oxygen tanks in about 3-4 hours), her emergency trach kit, a bagger and her GTube feeds depending on how long we’re out and about for, but being able to leave the ventilator at home has been a much welcomed change. We obviously hope that we’ll be able to make weans off oxygen after Evanna’s next open heart surgery down in California happening later this summer, but until then, weaning off the ventilator at night is our current focus until August.
We still don’t have a timeline for how much longer Evanna will have the trach for, but I’m hoping next months sleep study results will help give us a clearer picture of where things are at, and I’m pretty sure it’ll be a major topic of discussion at our next “Combined Clinic” appointment with our ENT and the Respirology Team that we have scheduled at the end of June. In my opinion as Evanna’s mom, our personal experience, and my (limited) medical knowledge, we still have at least another year with the trach. I think we’ll see a ton of improvements (especially after our upcoming open heart surgery with Dr. Hanley) over the Summer/Fall, but then we’ll hit winter, and there's a somewhat unwritten rule to not decannulate during RSV season/Winter when it comes to the pediatric trach population, and wait until next Spring/Summer before proceeding with this very big step.
However, while this life is indeed “our normal” and we don’t give it too much thought on a day-to-day basis anymore, always having to suction Evanna is getting a bit old, and can definitely be quite the inconvenience at certain times. At the moment, it’s quite stressful when we’re in the middle of feeding Bennett and all of a sudden Evanna coughs and you can hear a huge build up of secretions and she requires a suction right away. This means we have to stop feeding Bennett to attend to Evanna for a few moments, which is always followed by Bennett crying hysterically for interrupting his feed. This situation is pretty much a daily occurrence if either Nick or I are watching the kids by ourselves and we don’t have a homecare nurse scheduled during the day.
On the other hand, we recently proceeded with quite the huge milestone and temporarily put away the living room/transport ventilator (just into one of our closets). We originally had two ventilator “set ups” in our house – one up in Evanna’s bedroom and one down in our living room. Well, since Evanna is up to “all day sprints”, the living room vent pretty much goes untouched and was essentially just taking up space. The living room vent is also the same one we use to take with use when we went out (which is why it's also referred to as the "transport vent"), but again, because Evanna doesn’t require the vent during the day, we no longer bring it with us, and so it just made sense to put it away for the foreseeable future. Now, I know this sounds weird, but it definitely took a little courage to do this, as we almost view the vent like a security blanket. There is definitely a chance that Evanna will come down with a huge respiratory illness and require going back on the vent during the day to help support her through that illness, but it’s also not a hard to pull this additional vent out and get set up should it ever come to that.
Overall, it’s just kind of a weird to bring Evanna down to the living room in the morning and no longer see the ventilator sitting on the cart anymore. In it’s place, we moved the suction machine to the top of the cart, added her trach care kit to the middle, and have filled the bottom of the cart with diapers, wipes and receiving blanket…. essentially more “normal” baby/toddler stuff, which is somewhat a significant step away from the trach life, and I can’t help but marvel at how far we’ve come! 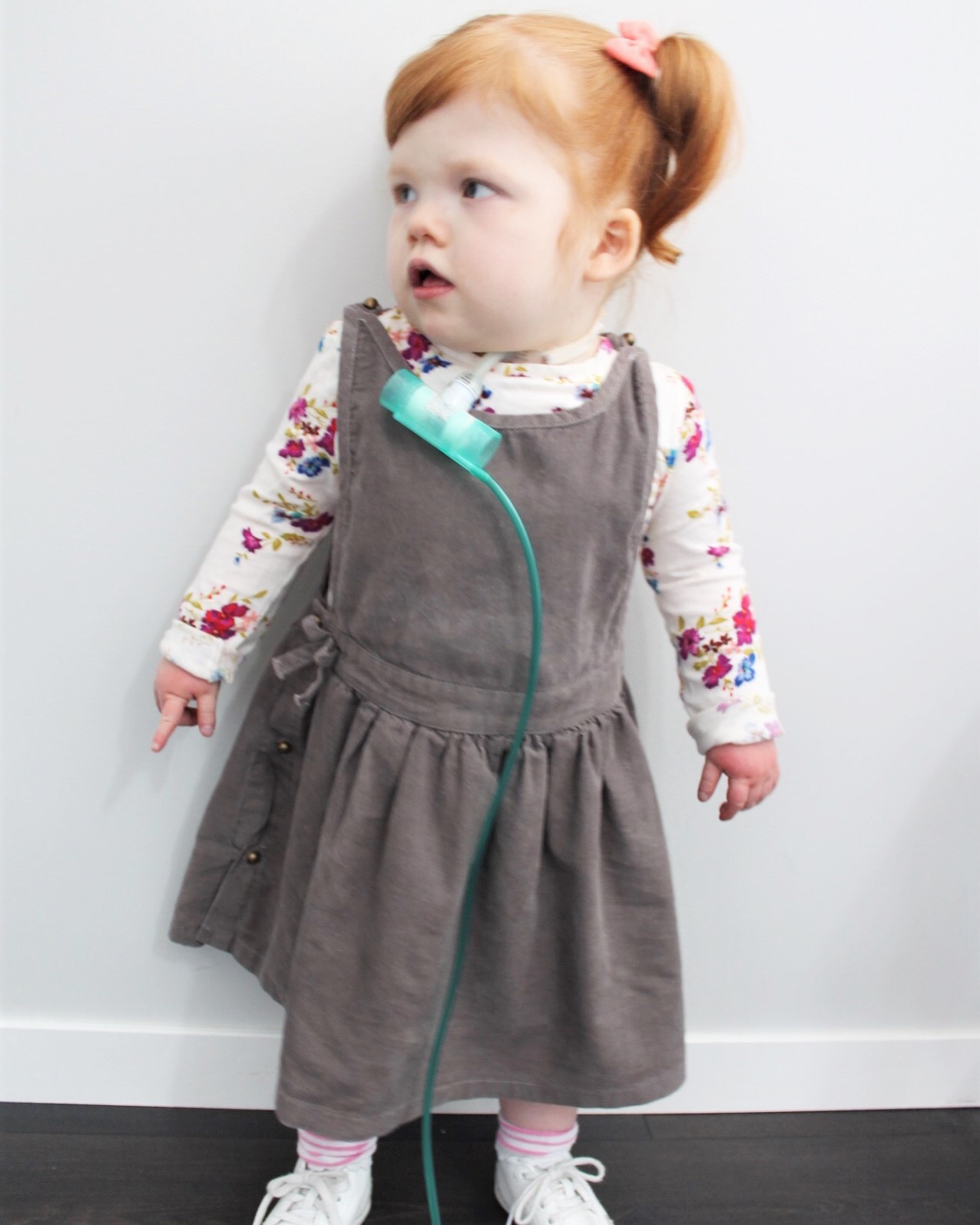 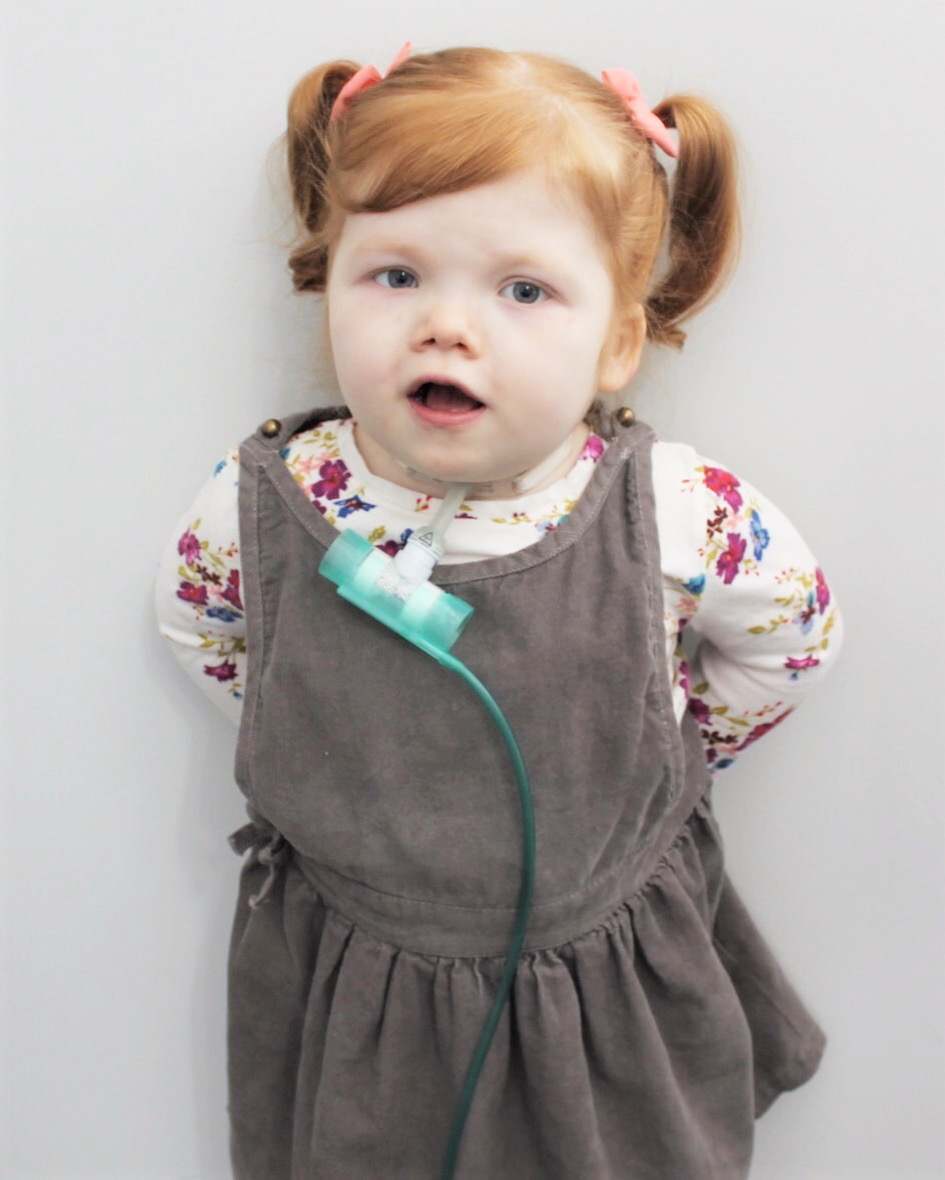 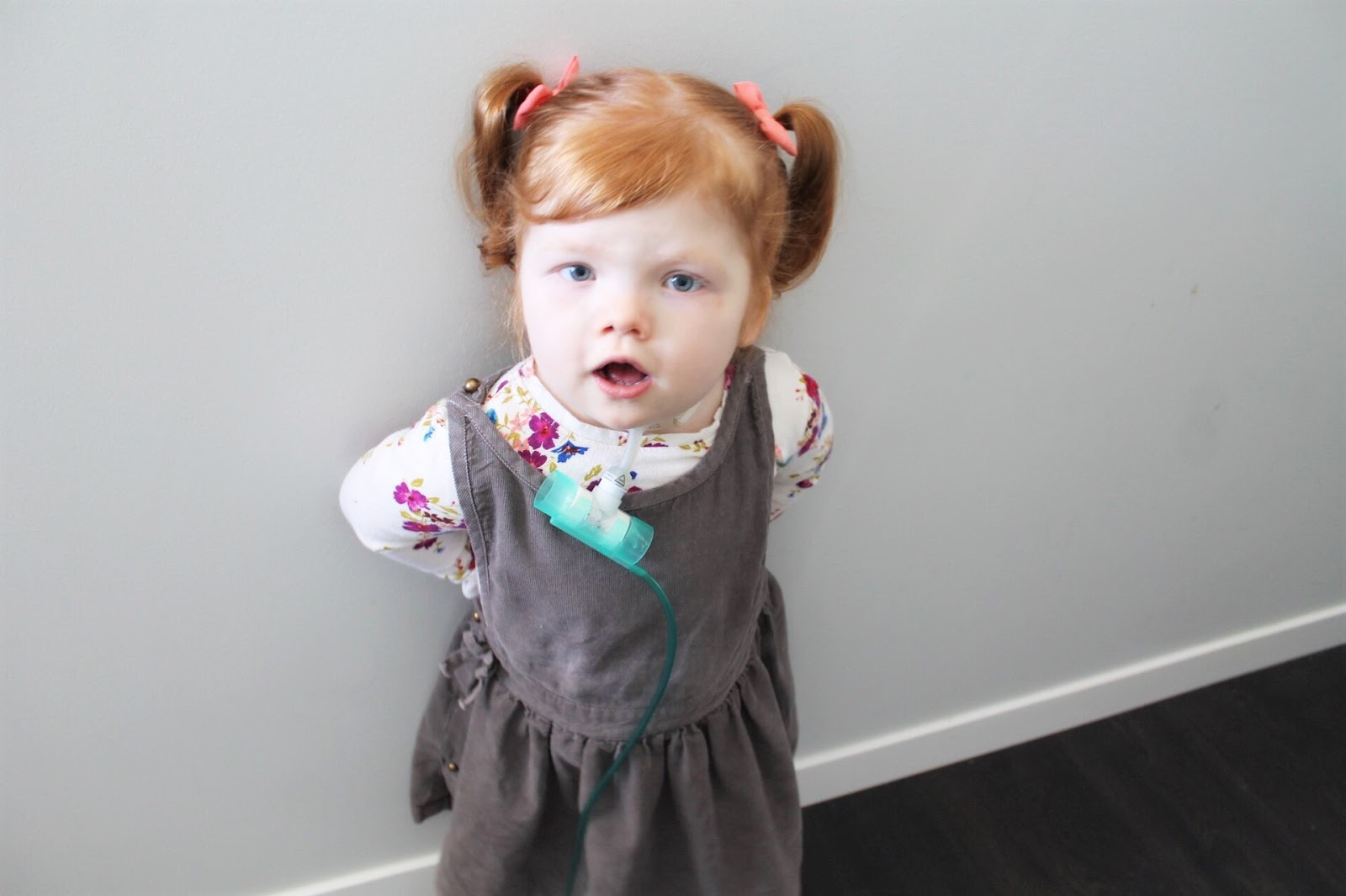 Thanks for your continued love + support over the last few years while we’ve been on this crazy journey with Evanna, her special heart and the unique elements that a trach, ventilator + oxygen bring.