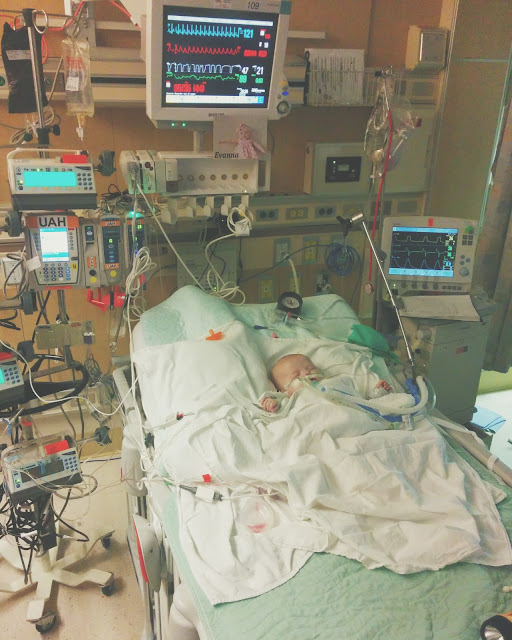 So as my Facebook friends saw, I hit my breaking point yesterday when Evanna's plication (pinning down of her diaphragm) surgery got bumped from yesterday to today. It wasn't even about the bumping, it was them bumping us from last case yesterday to last case today that made me furious.

Yesterday was a pretty calm day. Evanna mostly slept, and Dr. Rebeyka came by to have me sign the consent form. They had 3 cases that day (open heart surgeries), but we were still hoping that they would get to Evanna, because of how easy and simple her procedure was. However, around 2pm, Dr. Rebeyka came by to inform me that they were not going to get to her, and we were going to have to wait another day. I asked him what time to expect her surgery to take place, and he responded in saying he wasn't sure, and it probably wouldn't happen until the afternoon. He did however state that they only had 2 cases today, and so Evanna's surgery would definitely get done.
It took me about 10 minutes to digest the information, and once I did, I started to get extremely upset. I ended up leaving the unit and had to go for a walk to try and cool down. After coming back, I was still angry - so I didn't stay too long before heading back to the Ronald McDonald House to get a break and try to calm down.
Back at the house I decided to try and distract myself and do what I could to take my mind off things. Finally around shift change, I decided to head back to the hospital for night rounds and see Evanna. I was surprised at how angry I still was and definitely talked to the staff and Dr. Garros about my concerns and try to come up with a solution. I decided to make it an early night, because I planned on coming back the next day at 6am to catch cardiac rounds and talk to them directly.

The next morning, I got up extremely early and got to the hospital at 6am like I said I would. The nurses that were still on stated that they were rooting for me and the mission I was on. Finally around 7:30am, cardiac rounds showed up, and after they discussed Evanna, I asked if she was going to be the second on third case of the day. When they responded that she would most likely be the third case, I decided it was time to bring up my concerns. I expressed that we were still hoping for a Calgary transfer on Wednesday, so to be fair to Evanna, the earlier her surgery could be - the better, as it would give her more time to heal. I expressed that we've been here for over a month, and we are ready to go home. Evanna has been intubated long enough, and I want her extubated as soon as possible so we can hold her again. Dr. Rebeyka said Evanna was his only case today, so no matter what, she was having the surgery, but the OR time wasn't really up to him, because it was Dr. Ross's OR day and his cases.
They left, and I wasn't sure so of the impact I had made, but about an hour later, a nurse came over to tell me that Evanna was now going to be the second case! I was so ecstatic and happy that things were finally going my way.At rounds Dr. Ryerson confirmed the switch and said we were very lucky Dr. Ross was so willing to let us squeeze Evanna between his two cases and I owe him a bag of Doritos (which I complied too with a thank you card). After rounds, I left to grab a bit to eat, where I ran into Dr. Cave and Dr. Duff in the hallway where they stopped to tell me how proud they were of me for speaking up and advocating for Evanna. They said it was pretty brave of me, and I pretty much just did their job lol.

Evanna went in for surgery at 12:30pm, and Dr. Rebeyka came out just after 1pm saying everything went well, and that Evanna would be out soon. Social work also found me in the hallway and stated they had heard about my little "speech" and asked if I needed anything else. Dr. Horn (Dr. Rebeyka's right hand surgeon) also found me in the hallway to ask if I was okay. I guess I was taken back by all the attention I was receiving, and surprised at the impact I had made for just expressing my concerns (in a mature manner) at cardiac rounds. I guess they just aren't use to parents speaking up like that, so they knew I was a bit angry and wanted my concerns addressed.

Evanna handled the surgery very well, and after she was back on the unit and settled, I decided to leave to run some errands and go back to the Ronald McDonald to pack a few things up.
Tonight Evanna is still doing very well. They did up her pain medications by a little bit (from what she was on pre-surgery) and she has a drainage tube again. She did have one angry episode, so they had to give her a few more shots of pain meds and sedation, but other then that, she's been a little trooper.

Tomorrow we are hopefully continuing with the plan of transferring Evanna back to Calgary. So far all systems are a go, but Evanna needs to have a good night and Calgary still needs to have a bed available (though they are ready and willing to accept us at the moment) before we get the official green light.

Thanks for following along,
xo The Irvine Family
Written by Kierra Irvine
Email ThisBlogThis!Share to TwitterShare to FacebookShare to Pinterest