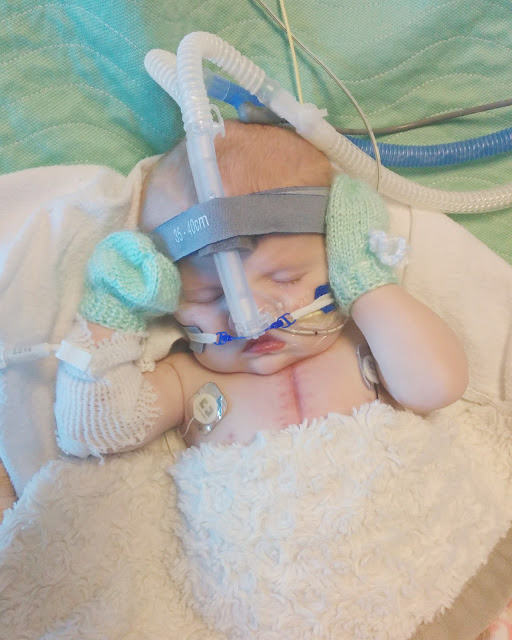 I could just cry when I see that we're into the 40s in regards to how many days we've been in the PICU, and we're not really that close to going home. We're making progress, but it's so incredibly slow, it's almost gut wrenching.

Evanna was extubated on Thursday around noon, and handled it very well - just like I knew she would. The intentivists were very impressed with her, and happy with her breathing on BiPAP. They actually put her on a newer type of BiPAP/CPAP called NAVA, that is really cool. Basically they put an NG tube down into her diaphragm that measures and senses the type of breath Evanna is taking, and the machine delivers the amount of oxygen that she needs. As humans, we don't always take the same type of breath each time. Sometimes we take long and deep breaths, and at other times, we take short and quicks breaths. The regular BiPAP machine delivers the same breath all the time, but the NAVA caters to what Evanna wants and needs with every breath. It will even signal when she needs less support, decreasing its support automatically.

Evanna had a very good Thursday night and Friday morning, but things quickly changed and I got a good reminder that this rollercoaster ride we're on, is far from over. On Friday afternoon, Evanna had a very high heart rate, but because she had no other signs of withdrawal (high temp, agitation, etc), and her feet had a blue tinge to them and were very cold, they were very sure that something was up. They also noticed her liver was enlarged, so they quickly called for an xray and ECHO. The xray showed nothing, but the ECHO showed that her right and left ventricles had mild to moderate decrease in function. They started her on a drug called Milrinone to help with the squeeze of her heart (it does a few other things, but sometimes all these drugs go over my head). They also decided to start her on a low dosage of epinephrine, but as soon as it hit her body, her heart rate jumped up to over 200 beats per minute and I screamed for our nurse to turn it off (our nurse that day was awesome by the way). I was so scared that Evanna was going to code again, as she was doing some of the same things she did last time, just before she coded. They stopped the epinephrine and never turned it back on. They just kept her on the Milrinone, and waited to see how her body would respond to that. They said that if her lactate levels got high, we were automatically looking at ANOTHER intubation. It was an extremely stressful and high tense day for us. They were so worried about her crashing, that they had sedation and paralytic medications drawn up, the intubation cart near by, and even measured her for the ECMO circuit (this is a type of life support). Even the intentivist on for that day (Dr. Megan Mahoney), didn't leave work until she was satisfied that Evanna stabled out. Finally around 9:30pm, Nick and I finally felt comfortable with Evanna's improvement and progress, that we decided to leave and get some sleep.
I called twice during the night to see how Evanna was doing, but both times they said her heart rate was good and her lactate levels were still low.

Evanna had a very good day on Saturday. The doctors decided to pretty much leave her alone for the day and not really change much in regards to her medication. Nick held her for a few hours, and she enjoyed that very much! We had some friends come join us for lunch and hang out at the hospital, and Nick and I were even comfortable enough to leave around 6pm and go for dinner to somewhat celebrate my birthday (this will definitely be a birthday I never forget).

Today was a little rocky again, as her heart rate was a little high. Dr. Dickie (the cardiologist) came down to redo her ECHO from Friday to see if there was any improvement and during the ECHO he told me that her heart function looked better. He checked her liver and said that it too had improved, but because of her high heart rate, he decided the best coarse of action was to give her some more fluid (this helps with relieving some pressure off her heart). Evanna's heart rate remained relatively high all day, and I finally decided to hold her around 4pm. Slowly her heart rate decreased (down into the 130s!!), and Evanna is now in a very peaceful sleep.

They have mentioned that if Evanna continues to have rocky days, they may transfer her back up to Edmonton for another Cath to help get to the root of the problem. This is ONLY if she continues to not improve over the next week, that they'll take such drastic measures. As much as it would suck to have to go back to Edmonton (it would be such a step backwards), at least we know the staff there very well, and I do consider the Stollery our second home.

Overall, though Evanna is extubated, we still have a long way to go. The intentivists and cardiologists best guess as to why this is all happening is that her body is trying to get use to her "new" heart and "new" diaphragm. She was intubated for such a long time, and now that the support has been taken away from her, Evanna's body has to learn how to do all of the work all over again with newly arranged anatomy.