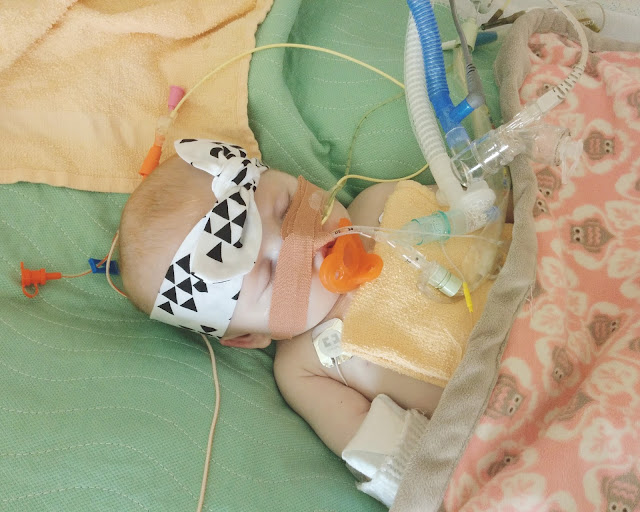 Update, update, who wants an update?

This is probably the longest I've gone between updates, so I'm sorry to all of our loyal followers.
Things have been pretty slow since Saturday, so I guess I just haven't felt the need to write anything. Other then Evanna still being intubated, the other major thing that we're dealing with is all of the weaning we have to do with all of the sedation and painkillers she's on. Her body is use to such hard and heavy drugs, that the weaning has to be extremely slow to avoid withdrawals. Heck, because of how slow we have to go, we may even go HOME on a weaning schedule (which is not unheard of). It'll definitely be weird picking up morphine at the pharmacy for a 6/7 month old!

In regards to my last post, things are definitely better here at the Alberta Children's Hospital. I guess I wasn't prepared for the change in culture that anyone would experience when you are transferred to a different hospital. Every hospital and unit has their own way of doing things and it just takes time to get use to it. On the flip side, they also had to get to know Evanna. She came from a different facility with a long list of issues that would be scary to any new team (especially a team that isn't necessarily experienced with cardiac kids), so they just had to get to know her.
In conjunction with all of this, I have to tell you about a tender mercy that happened on Saturday night after the terrible day I had here in the PICU, and then posted about it. In the middle of the nursing shift change, I looked out into the hallway from Evanna's room, and I see a nurse that I recognise from the Stollery. It took me a few moments to make sure I wasn't experiencing déjà vu, and reconfirm that she was indeed a Stollery nurse who has watched over Evanna in the PCICU after her open heart surgery. After confirming with our new nurse that the woman outside our door was indeed Donna, I walked out to talk to her. I started tearing up immediately, and told her what had occurred over the last 12 hours and my concerns with being at ACH. She told me that while I was correct in that the Stollery is an amazing hospital, with an amazing team of intentivists and nurses, Evanna was exactly where she needed to be, and she would receive excellent care here. She told me to give myself a few days to get use to the unit and staff here, and everything will work out. Evanna didn't need to be at the Stollery anymore, because she is stable from a cardiac perspective, and the Alberta Children's Hospital is more than capable of handling her complexity. Donna was the direct answer that I needed to the many prayers I had said that day.

The last 4 days have mostly consisted of drug and ventilator change ups to prepare her for extubation tomorrow. Most of the harder medications have been transition to oral, which will make it easier to wean in the long run. Due to Evanna having 3 failed extubations (though I don't count the last one as a fail as she was extubated for 4 days before she coded), they are just super paranoid to doing a fourth extubation, and have been holding off for as long as they can.

Other things to take note of, is Evanna did have a head MRI on Monday. Not exactly sure why they went to this extent, but I guess they want to dot all their i's, and cross all of their t's. They also haven't taken out any lines since we got here, but that's because they don't want loose any access in case she were to fail extubation again.

I've gotten into a new routine since being back, and though Evanna is still in the PICU, we've still made dinner plans for this weekend for my birthday and a fun girls night this coming Monday.

Thanks for all of the support,

xo The Irvine
Written by Kierra Irvine
Email ThisBlogThis!Share to TwitterShare to FacebookShare to Pinterest