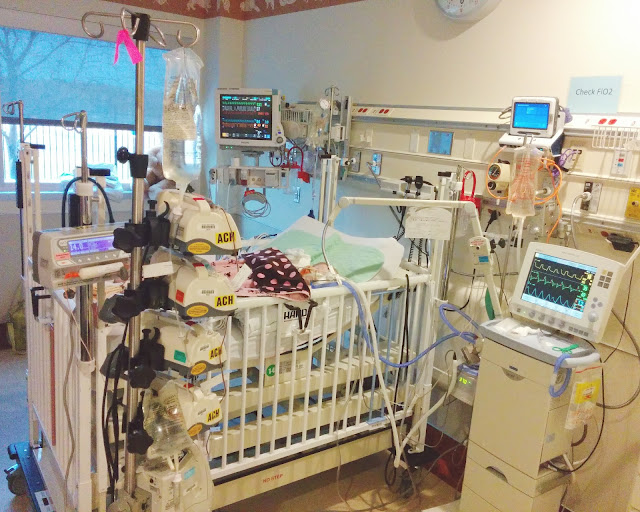 So a part of me is regretting our transfer back to Calgary. I know everyone is going to be surprised to hear that, especially after fighting so hard to get "home", but hindsight is always 20/20.

Evanna is still stable (something that I have to constantly remind myself when we're not moving forward at the pace I would like), but things aren't necessarily going the way I had hoped.
We were transferred under the impression that we had a straight forward plan, but the plan isn't necessarily being followed, so it's been a frustrating day for me. I thought being here in Calgary would be such a huge step forward, but in reality, it's not. Evanna is a new patient to them, and to them - the past is the past. They want to run tests they've ALREADY done in Edmonton down here again and I'm learning real fast how different each intentivist is. I'm all for new ideas, but not when it doesn't make a whole lot of sense. I'm quickly seeing that they don't have a whole lot of experience with cardiac/22q kids, and her medical history can definitely pose as very scary situation to a new team.

I'm definitely feeling extremely guilty for pushing for the transfer and even regretting my decision. We had built such amazing relationships with the team up there, and they are definitely more experienced when it comes to dealing with babies like Evanna. I'm sure once they get to know Evanna, and we get more comfortable at ACH, things will get better, but the transfer definitely hindered Evanna's progress, and it will take me a little while to get over that.
Yes, it's great to be a bit closer to home, and be near our supports, but I'm thinking at what cost? A few people tried to kindly warn me of the differences, and I wish I would have listened a bit better. Overall, I'm just REALLY missing our Edmonton medical team.

Not much has happened (in my opinion) since the transfer. They're still working on weaning her sedation. This is taking such a long time, but it's because Evanna has been on such heavy and hard drugs for an extended amount of time, so her body is use to them. Yesterday they were talking about a Sunday/Monday extubation, but the intentivist on today was hinting at a much longer intubation (like 3-4 weeks). This is where I am having major issues, and will be bringing up my concerns to the intentivist on tonight.

They're giving Evanna another transfusion today to get her hemoglobin up, as Evanna requires higher hemoglobin levels than a normal person, so her body receives more oxygen while she still has a VSD (hole in her heart). They are continuing to work on weaning her sedation levels, and doing different things to get that right upper lobe in her lung to open up. We'll see what the next few days bring, but I'll be definitely fighting to get them to extubate her by the end of the week, as I am NOT in board with keeping her intubated any longer then that.