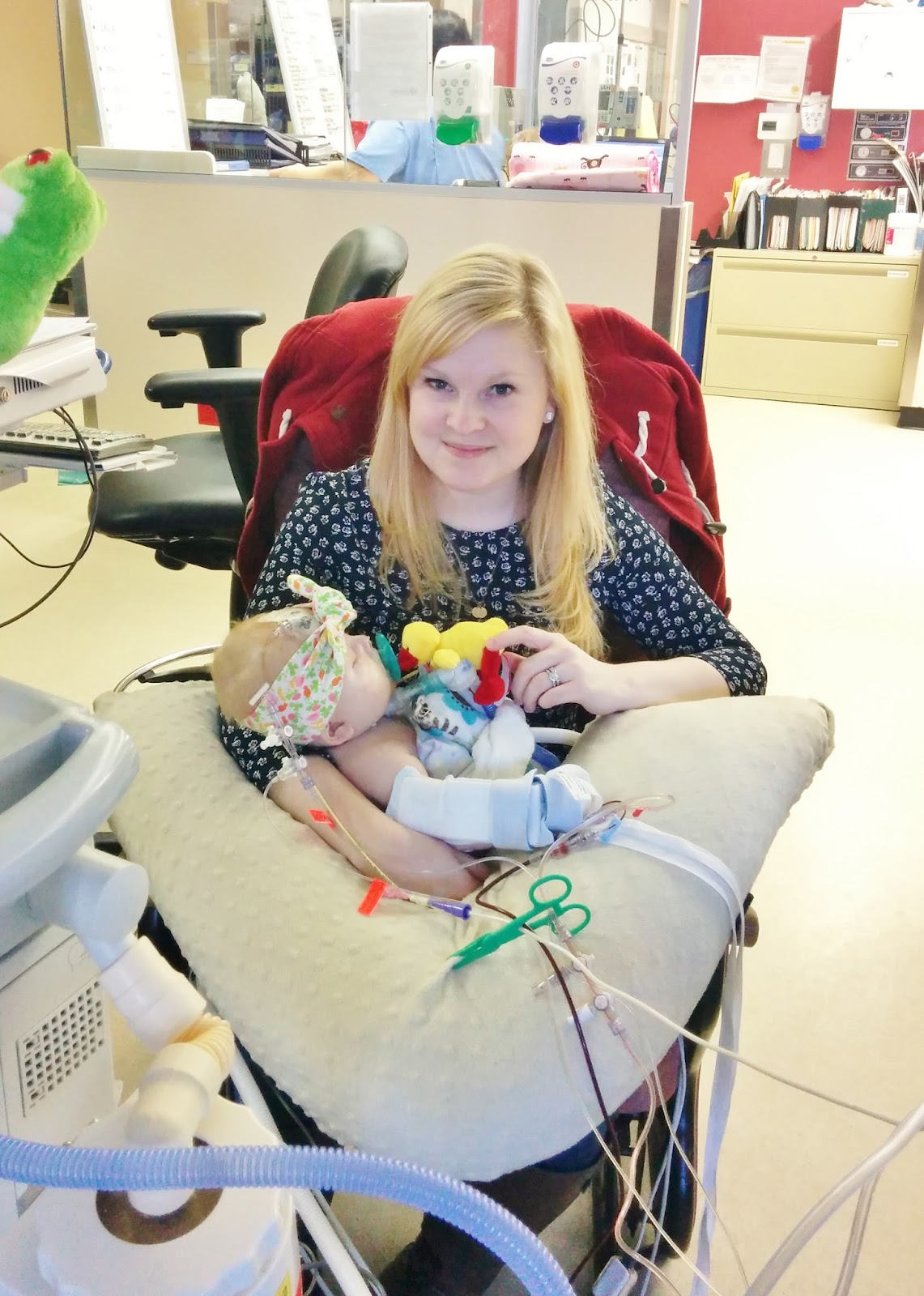 So it's been an incredibly busy 24 hours for me, and I don't even know how I had time to write up this post.
Yesterday Evanna had her first trach change done by Dr. Eksteen. It was kind of anticlimactic which makes all the fuss around it a little confusing. I KNOW the first trach change can sometimes not go as smooth as Evanna's did (the stoma could have closed up, etc), and there is a reason that the ENT has to do it, so in all reality, I'm glad it was as boring as it was.
After Dr. Eksteen left, we got things all cleaned up and I essentially just grabbed my nursing pillow and grabbed Evanna and pulled her into my arms. The nurses technically helped to make sure no lines and wires were being pulled (especially the scalp IV), but I pretty much did it by myself which I haven't been able to do since the beginning of October. I'm not a fan of the big trach that Evanna is currently sporting, but Dr. Eksteen has approved a different and nicer trach for her to be ordered for the next trach change so Evanna will have an easier time just being a baby.
I am in serious "I want to go home" mode and so I'm totally being that annoying mom on the unit making sure we are constantly doing things to ensure that we are crossing things off the list that we need to complete so we can be discharged. Last night I asked Respiratory Therapy to hold off on trach care until I got to the hospital this morning, as I wanted to do it myself. They happily agreed as they’re eager for me to learn how to do everything myself so we can go home. It was actually quite a busy morning with lots of different disciplines showing up all wanting to teach and tell me different things. Kid Clot (hematology) came by early to have me test Evanna's blood, as we need to monitor it from home (it's VERY similar to how diabetes monitor their blood sugars), though I wasn't exactly successful. Evanna has such tiny fingers and she wasn't being that cooperative, and so I definitely have some practising to do! Warfarin is such a hard drug to control in small kids, as any little changes like diet, drugs and activity level can affect the way it's metabolised and used in her body.
Finally Respiratory Therapy was able to come do trach care with me. I cleaned the site for secretions, changed her trach tie, and even suctioned her myself! I'm a little scared for when I have to learn how to "bag" her, but I'm sure I'll get the hang of it real quick. Nick will most likely ace that part, as it's kind of in his job description. We even did some "arts and craft time" together, as they taught me how to make my own trach ties if I want to continue to use the Stollery protocol (I've been kindly pointed out that Calgary uses completely different ties, and they aren't necessarily that great). 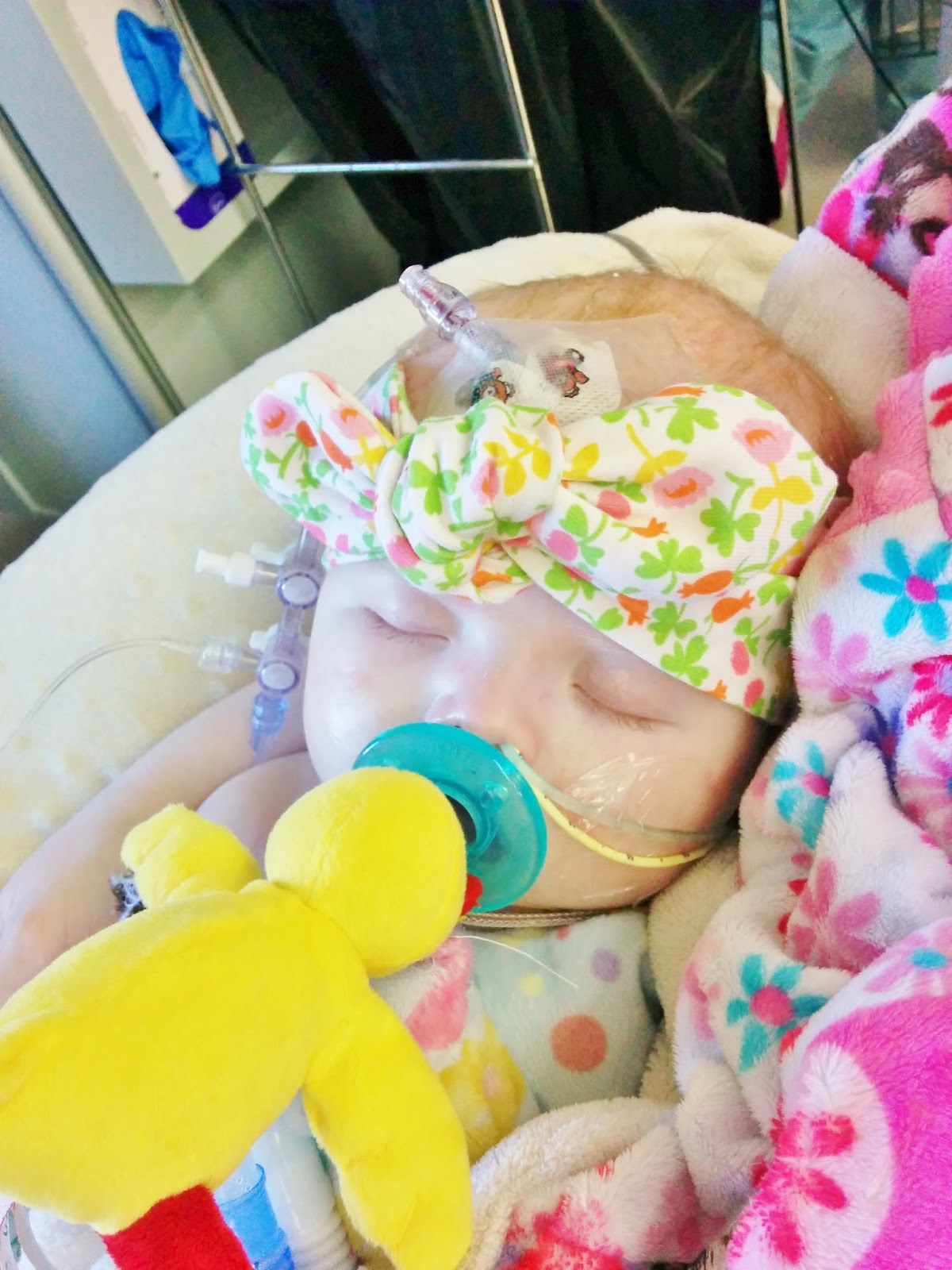 All day we waited for OT/PT to show up, but they never did (we’ll call them again tomorrow), so around 1:30pm when Evanna woke up, I grabbed the nursing pillow again and pulled Evanna into my lap (with her nurses playing catch up to make sure her lines and wires weren’t getting caught on things). We actually had one of the best cuddles we’ve ever had since her first open heart surgery and I’ve never seen Evanna so content as she was this afternoon. She primarily just slept in my arms and knew exactly who I was and where we were. She probably stayed in my arms for a good 3 hours, but eventually she got really sweaty and wanted to move around. While I was holding Evanna, she got another blood transfusion, and those always tend to make her a little hot as well. Though Evanna’s oxygen saturations were fine, her hemoglobin levels were on the low side today and so Dr. Duff wants to make sure he’s sending Evanna back to Calgary into tip top shape. Finally we have continued to decrease her sedation medication, and we have been presently surprised at well Evanna has been handling it. Normally when we lower the dose by even a smidge, Evanna’s body notices and it sends her into a tailspin requiring a bunch of PRNs (“as needed” drugs the nurses are allowed to administer to Evanna without a direct order if she needs something). Everyday we have been dropping her IV medication by 1, and Evanna has barely noticed the change. Now, we’re not going to go faster, but it’s just been a nice change for Evanna to handle the wean for once.

This afternoon Dr. Duff called Calgary (well, the Alberta Children’s hospital) and talked to the intentivists about transferring Evanna back. This evening he confirmed with Dr. Ross (she’s an intentivist at ACH) that they will come pick up Evanna on Friday, as they need to bring a patient up to Edmonton anyways, so they’ll grab Evanna on their way back. So it’s basically confirmed - Evanna is being transferred back to Calgary this Friday, and I’m hoping this will be another step towards getting Evanna discharged. I called the Calgary hospital homecare team this morning again, and they said they will come and meet with us early next week to begin the process of setting up homecare. There is seriously so much that needs to be done before Evanna will be allowed to come home, and my head is spinning with a never-ending check list. Thankfully I have some awesome trach moms that live in Calgary who have already gone through this process that is helping me every step of the way. My aunt and uncle have also graciously stated that they would love in any way possible. My uncle owns a large respiratory homecare company, and has said that he’ll make sure everything is taken care of.  An incredible tender mercy in journey I never wanted to take. 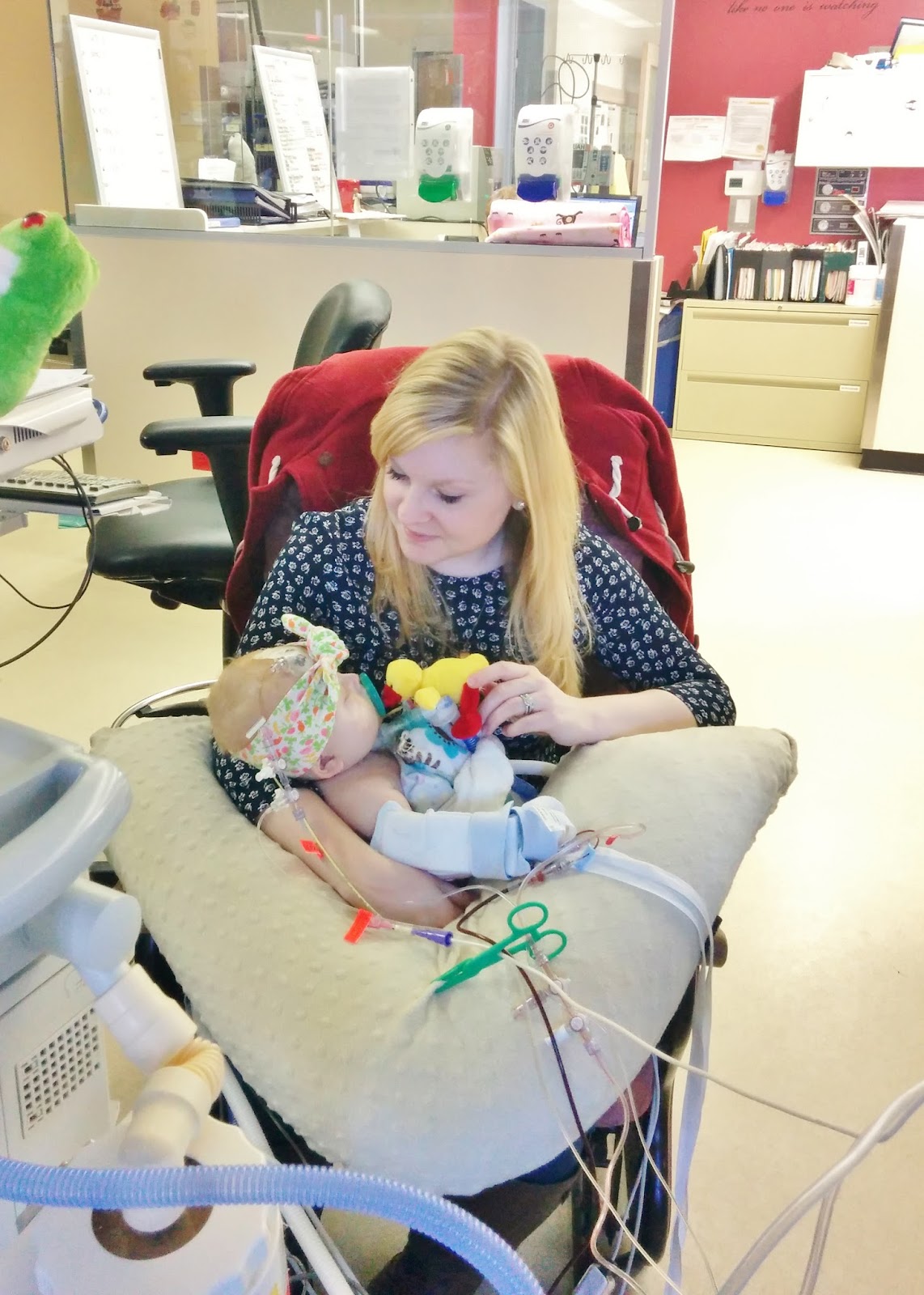 Finally because I was able to blog this post from my computer (most of my blog posts are done and uploaded from my phone at Evanna’s bedside), I want to share an incredible video that was sent to us about a month ago. My sweet friend Jane is currently attending university in the USA (Southern Virginia University), and is a part of an acapella group called “The Fading Point”. Jane has shared our story with her friends, and they put together an incredible and touching video in which they share some beautiful messages, and sing a sweet song to Evanna. I hope you enjoy it as much as I do!

Friendly Reminder: Only 41 more days until Evanna's FIRST birthday! Make sure to RSVP to the public Facebook event and mail her a birthday card! Click HERE for more information and be apart of this special day!
Written by Kierra Irvine
Email ThisBlogThis!Share to TwitterShare to FacebookShare to Pinterest