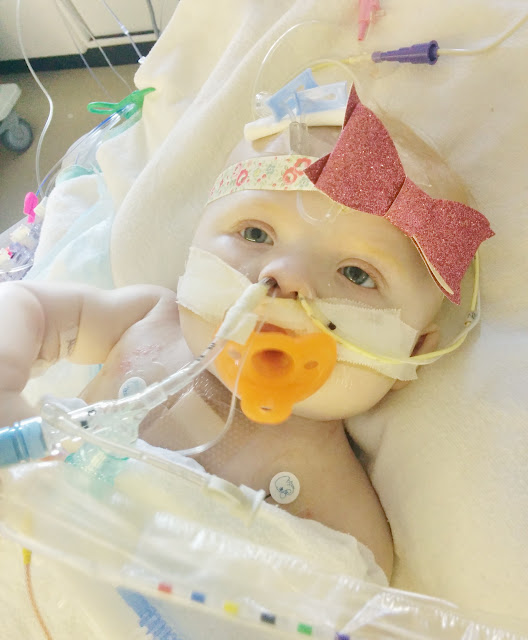 Other then the fact that we're still waiting to get back into the Ronald McDonald House and we're still staying at the Days Inn, Nick and I have gotten back into our regular "Edmonton Routine" almost immediately. It seriously feels like we never left - heck some nurses who've been off this week didn't even realize that we had left and are surprised when I tell them what happened. They thought we had just moved beds!
The Ronald McDonald House has graciously told us that we could still stop by in the evenings for dinner, and it shouldn't take too long for us to get back in. I'll hopefully get a better idea when I go there tonight for dinner and get an update.

Now - update on Evanna: after the initial 6 hours on TPA, they listened to her heart and did an ECHO. They couldn't hear clicking at all (mechanical valves make this little clicking noise), and the ECHO showed that the mechanical valve was still not moving. They decided to continue on with the TPA infusion overnight and do another ECHO and fluoroscopy in the morning. Yesterday around 8am, our nurse Jaymie (not that I want to name favourites, but she's definitely in my top 5) stated that she could hear a faint click, but Dr. Anand said he wasn't so sure. They took her back up to the Cath lab for another fluoroscopy before lunch, and it showed that her right leaflet was completely back to normal, and her left leaflet was trying to move. The best way to describe it, is her mechanical valve was like Nemo - one good leaflet, and one bad one that was trying it's best to move. Due to the partial success of the TPA, they decided to continue with it for ANOTHER 24 hours, and look a again today to see the results. The only problem that we started to run into, is at one point, her femoral central line was moved and it began to bleed out. They did their best to keep it controlled, but while Evanna was on TPA, there was no way it was going to stop. We were assured that Evanna was fine, and Dr. Duff joked that something bleeding was almost always guaranteed with TPA, and out of all her lines, her femoral line was the least of his worries. So they just packed the site and kept a pressure dressing on it.

This morning they did another ECHO, and the cardiologist saw BOTH leaflets working!! Such great news and music to our ears. They turned off the TPA, and bumped up the heparin again and proceeded with rounds. Basically we're trying to slowly get back to last Sunday's baseline, however it's not going to happen overnight. Evanna took a major hit over the last several days - from getting incredibly sick, to being kept sedated and paralyzed for over 48 hours in Calgary, to the mechanical valve malfunction, STARS emergency transfer back to Edmonton, the risky TPA infusion, bleeding from her central line, the list goes on and on. There are so many other things that I haven't even mentioned because they're so minor in comparison to everything else that has been going on. Overall, Evanna has been through the ringer this past week, but she has come through just as feisty and I'm just in disbelief with everything she has endured thus far. She is still such a content, happy and easy going baby, and the nurses absolutely love her. She is seriously such a trooper!

So the major goals for today will be to try and take out that central line that is bleeding and hopefully get the bleeding to stop. They've switched a few of her IV medications to oral ones, turned off all the epinephrine, norepinephrine, and Milrinone (again, for reference, these are all drugs that help the heart to pump), and change her ET tube tapes (breathing tube) - as they've become lose. They've consulted ENT, as that bronchoscopy Evanna was suppose to have earlier this week needs to be done, and they're hoping to do it tomorrow.

Thank you so much for keeping Evanna in your thoughts and prayers. Though she is doing so much better, we still have so far to go before we can bring her home. In reality, Evanna just turned 10 months old, and as heart wrenching as it is to think about, I'm slowly beginning to think and make plans for her 1st birthday that will most likely take place in the hospital.