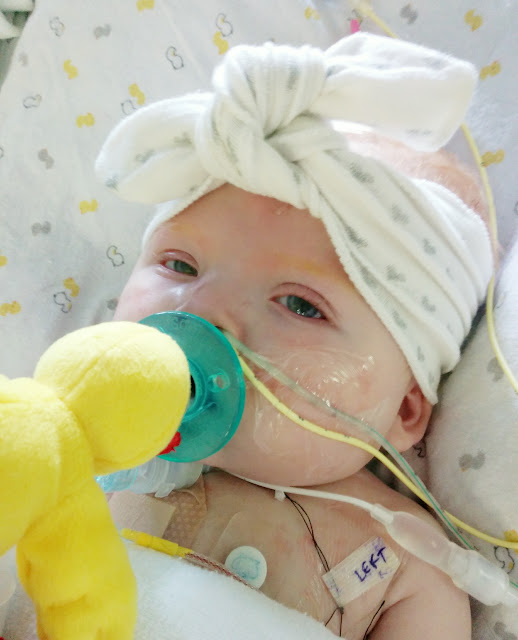 The recovery from Evanna's tracheostomy surgery has gone relatively smoothly. The first few days were purely spent with keeping her sedated (which is no easy task), but after the first 48 hours, they began to let her wakeup. Talks of a transfer back to Calgary started up again on Thursday, but we've all agreed (the intentivists and I) that a few things must be accomplished before that happens. First, Evanna has to go through her "first trach change", which will be done by Dr. Eksteen (our ENT who did the surgery). Secondly, we want Evanna's heparin levels to continue to stablize out. Evanna will have the trach change on Tuesday, and her heparin levels are improving and relatively maintaining, so as long as everything continues to go well, Evanna will most likely be transferred back to the Alberta Children's Hospital sometime between next Wednesday - Friday.

As far as the heparin in concerned, it was decided a while ago that the enoxaparin shots weren't working for Evanna (the heparin needles I talked about awhile ago), and that warfarin would be a better fit. Good news is it can be taken orally, bad news is it's a little bit harder to manage - especially in kids. Nick and I will be trained how to monitor it and make sure Evanna's levels stay within normal limits. Many things can affect warfarin (diet, drugs, etc), so it's a very tricky drug and we will definitely have our work cut out for us.

Yesterday Evanna was being a little bit of a "pain in the ass" according to Dr. Duff, as she kept him and our nurse a little busy. For the first time ever, Evanna pulled out her NJ & NG tube (her feeding tube), so they had to put those back in. Next her arterial line decided to quite working on us, so they had to take that out and put a new one in. Finally her central line was blocking up, and that combined with a fever, suggested that Evanna had a line infection (which has been confirmed by bloodwork), so they took that out and started Evanna on some antibiotics. The surgeon fellow also came and finally took out her sutures from her last open heart surgery (February 9), and so with all that, it made for a very busy day for Miss Evanna.

The plan it to have a quiet weekend while Evanna continues to recover from her surgery. They are working on slowly decreasing her sedation medication, and convert it from IV to oral (so we can continue to take out more lines), and even come down on the ventilator settings. Dr. Duff told me yesterday that we really thinks Evanna will be decannulated (taking the trach out) by the end of the summer, so while I don't want to get my hopes up, that was so awesome to hear from yet another doctor. Trachs tend to be something that kids need for years, but we're seriously only looking at months. I'm just going to focus on one thing at a time and concentrate on the milestone at hand. First - trach change, then transfer back to Calgary and work on strength and setting homecare up so we can go home. That's where my head is at, and would rather prepare myself for Evanna needing the trach for a year and be presently surprised if she needs it for less.

Thanks for following along and including Evanna in your prayers,

PS. Only 44 more days until Evanna's FIRST birthday! Make sure to RSVP to the public Facebook event and mail her a birthday card! Click HERE for more information and be apart of this special day!
Written by Kierra Irvine
Email ThisBlogThis!Share to TwitterShare to FacebookShare to Pinterest