Before I dive into this post - as it will be an update going over the last few days, let me quickly just say that as of right now Evanna's blood gases are improving, and Dr. Ryerson has stated that Evanna is slowly moving away from ECMO alert. I'm incredibly grateful for several things right now, and though it's been a bad day, I'm counting our blessings:
1) While it initially kind of sucked that our transfer back to Calgary was put on hold, I now realize (bigger picture) that Heavenly Father was watching out for us and ensured that we stay in Edmonton where it's so much safer for Evanna. Not sure if I've talked about it before, but due to Evanna's unique heart anatomy, she is NOT an ECMO candidate in Calgary because they don't have a pediatric cardiac surgeon on hand to hook Evanna up to the cannulas through her chest.
2) That Nick is with me again here in Edmonton
3) Prayers. Though Evanna initially got worse for a little bit after I posted what was going on, Evanna quickly came around and has stabled out. I truly believe it was because everyone stopped what they were doing and prayed for her. I can't express how thankful I am that so many people love our little girl and I'm incredibly grateful for the support we have received. 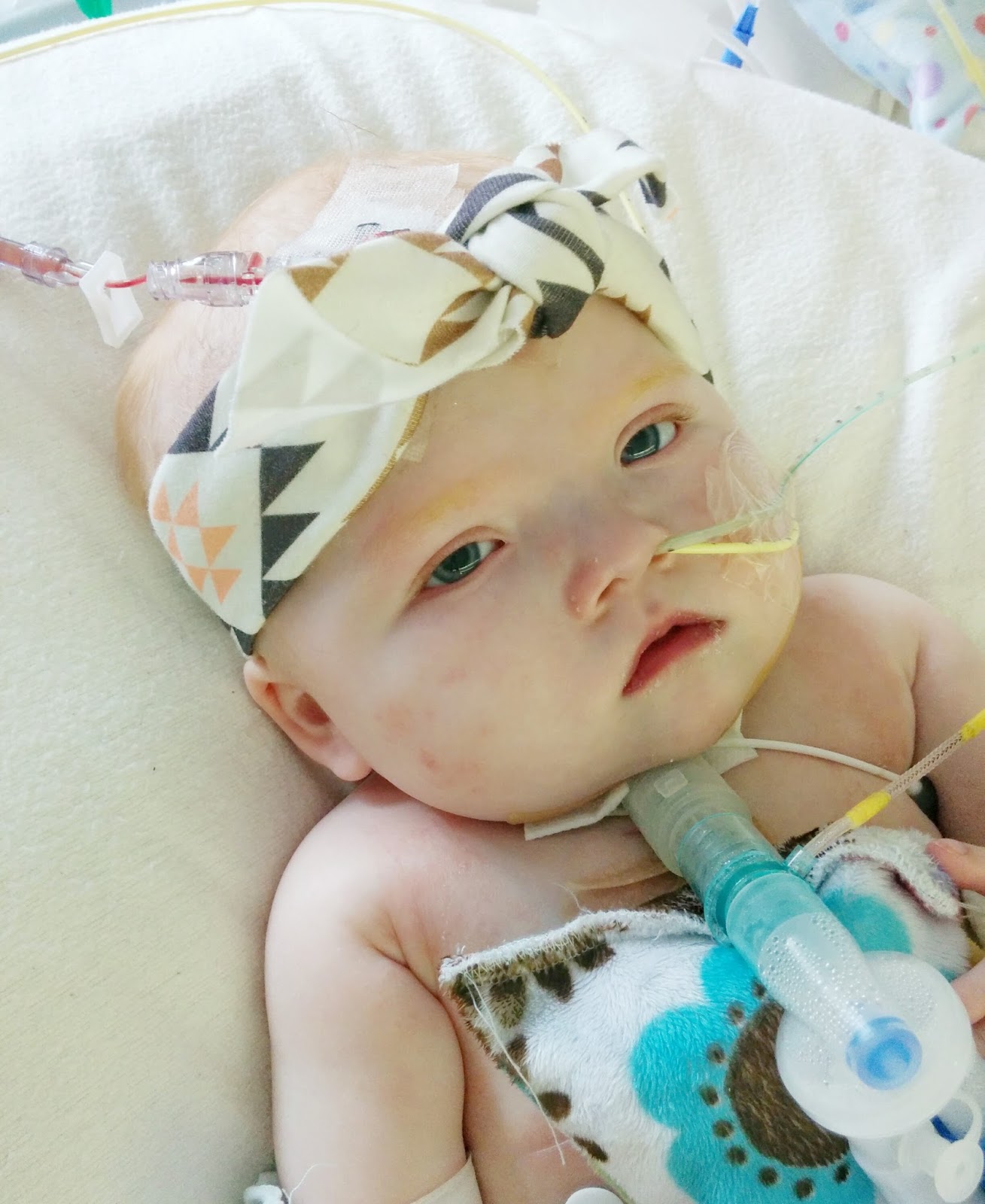 So just like that, Evanna's transfer back to Calgary has been put on hold for at least the weekend. We tested her INR levels this morning (it's a blood test done to check how thin her blood is as she's on blood thinners), and her levels were too low. Her mechanical valve is incredibly important and we just can't risk it clotting again, so hematology has asked that we stay in Edmonton for the weekend, as they feel it's safer for her to be in the PCICU at the Stollery.
I'm a little tired as I just spent the morning cleaning and packing my room at the Ronald McDonald House (it's not like a hotel, and house guests are still expected to clean up after themselves before checking out), and now I have to rebring all my luggage back into the house at some point later today. At the moment they're just holding us for the weekend and if Evanna's INR levels improve, then they will look at trying to transfer us again early next week. Just goes to show how quickly things can change when you're in the ICU! 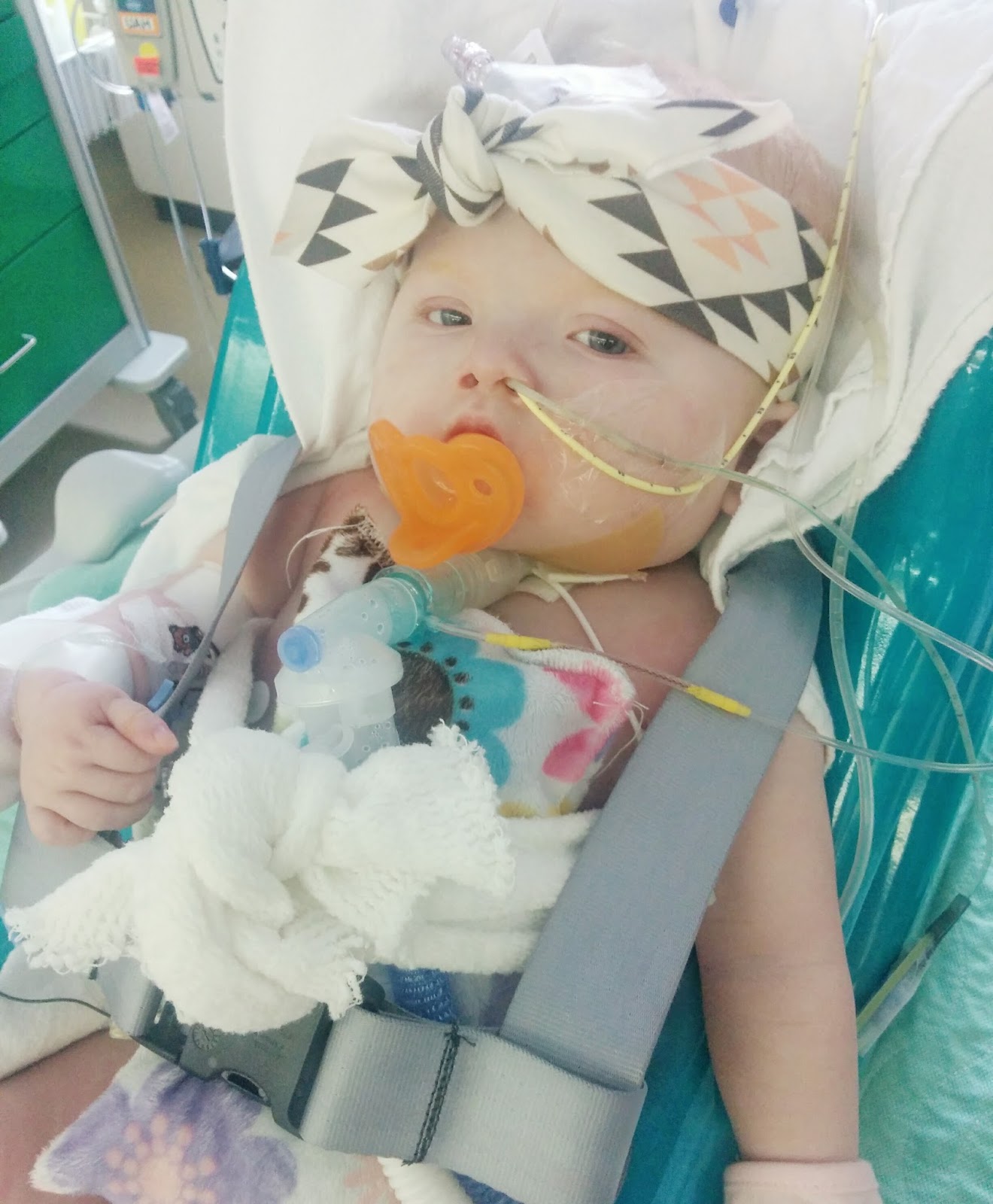 No hospital transfer meant we had time to do some physical therapy today! Due to the fact that Evanna was intubated and confined to a bed for more than 5 months, she has lost so much muscle and is incredibly weak. She is basically a newborn all over again in that regard, and we literally have to start at square 1.
This little girl has so much control over my life right now »»» but with a face like that, I don't mind one bit! 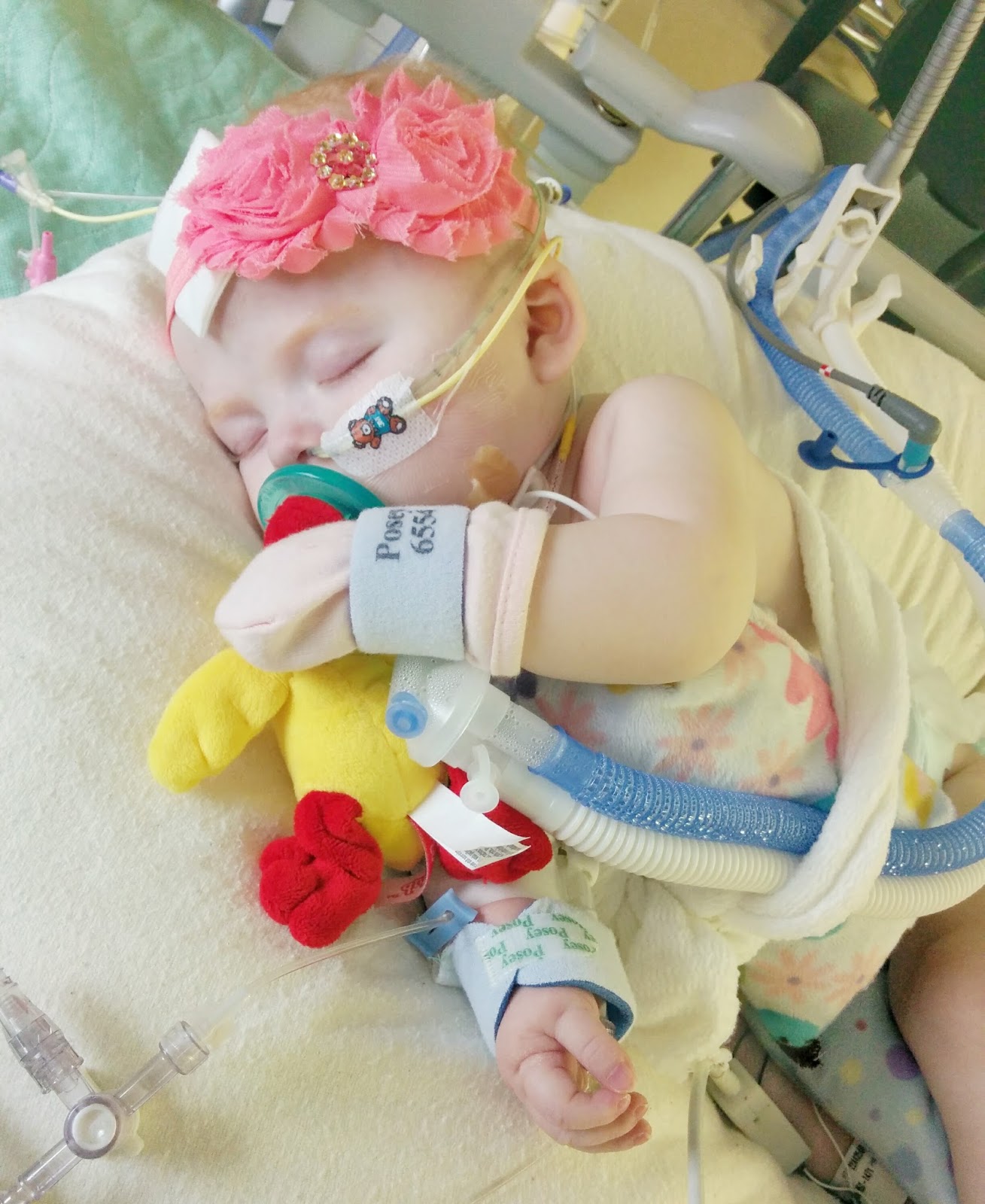 This is how I found Evanna sleeping when I came back from lunch with a fellow Stollery mom »»» I can't get over how stinkin cute she is!! I can't even describe how happy she makes me, and my heart could explode with how much I love her! 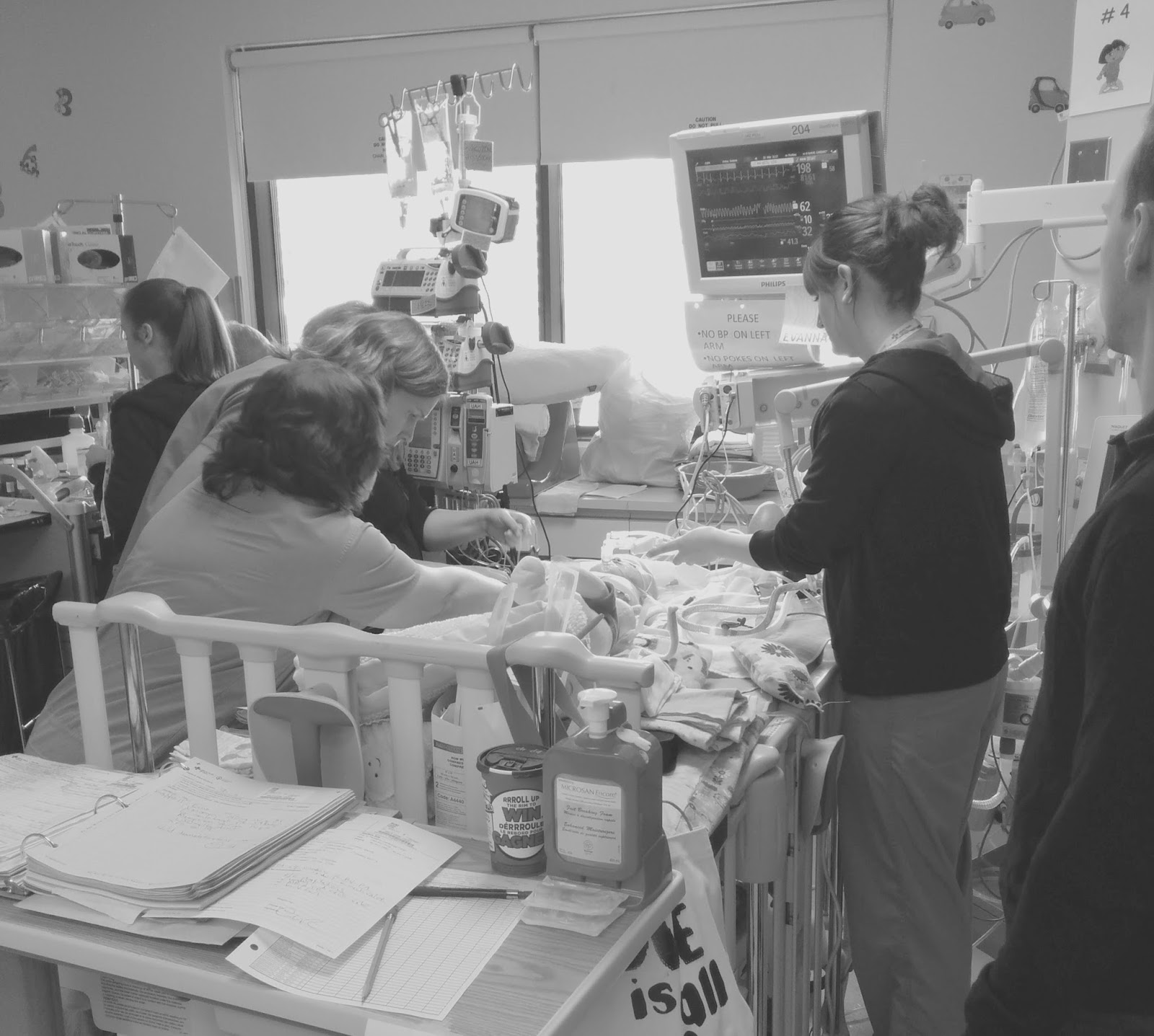 #PRAYERSFOREVANNA || Evanna is very sick right now. High heart rate, breathing really hard (requiring bagging at times), moments of unresponsiveness, low oxygen saturations, extremely high temperature, etc
They JUST did an emergency ECHO, and THANKFULLY her mechanical valve is fine and moving well ««« such a huge relief. They drew cultures and are starting her on some antibiotics again, and so I hope she'll improve throughout the day.
Please, please keep Evanna in your thoughts and prayers today. It's been a scary morning, and it's heartbreaking that just yesterday I was so happy because I was seeing glimpses of the old Evanna. At least we're still in Edmonton... 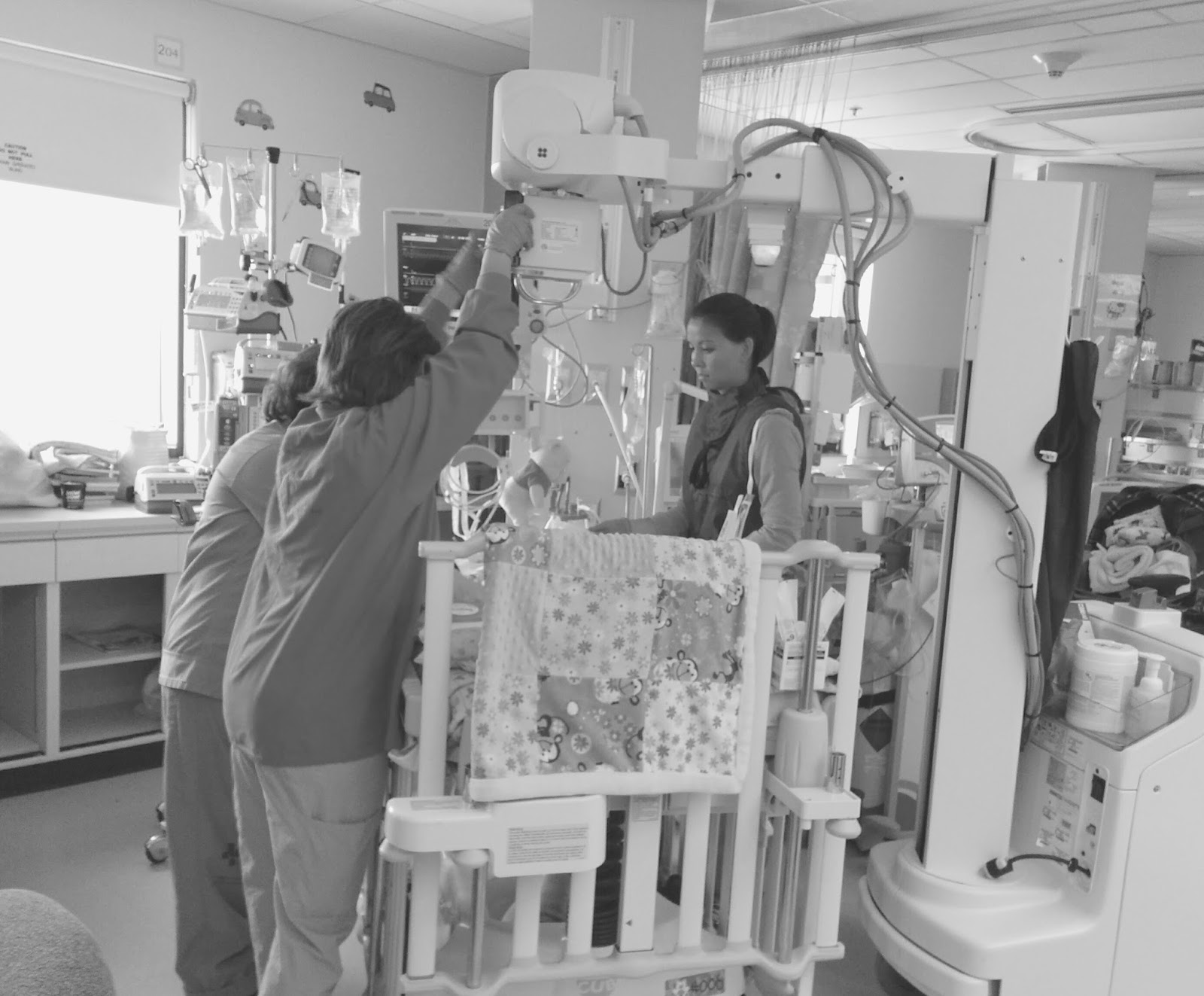 ECMO ALERT || Though Evanna's heart rate and temperature have come down, her pH is at 7, meaning she has become very acidotic. Her lactate and glucose are through the roof and Dr. Ryerson has officially put her on ECMO Alert. Anyone in the heart community will know what this means and how critical the situation has become. Nick is on his way (he was coming up to Edmonton today anyways), and is almost here. They're going to chemically paralyse Evanna and start her on some Milrinone (and drug that helps the heart pump) in hopes that it will improve her blood gases. I'll continue to update when I can ///// Picture is Evanna having a abdominal xray done 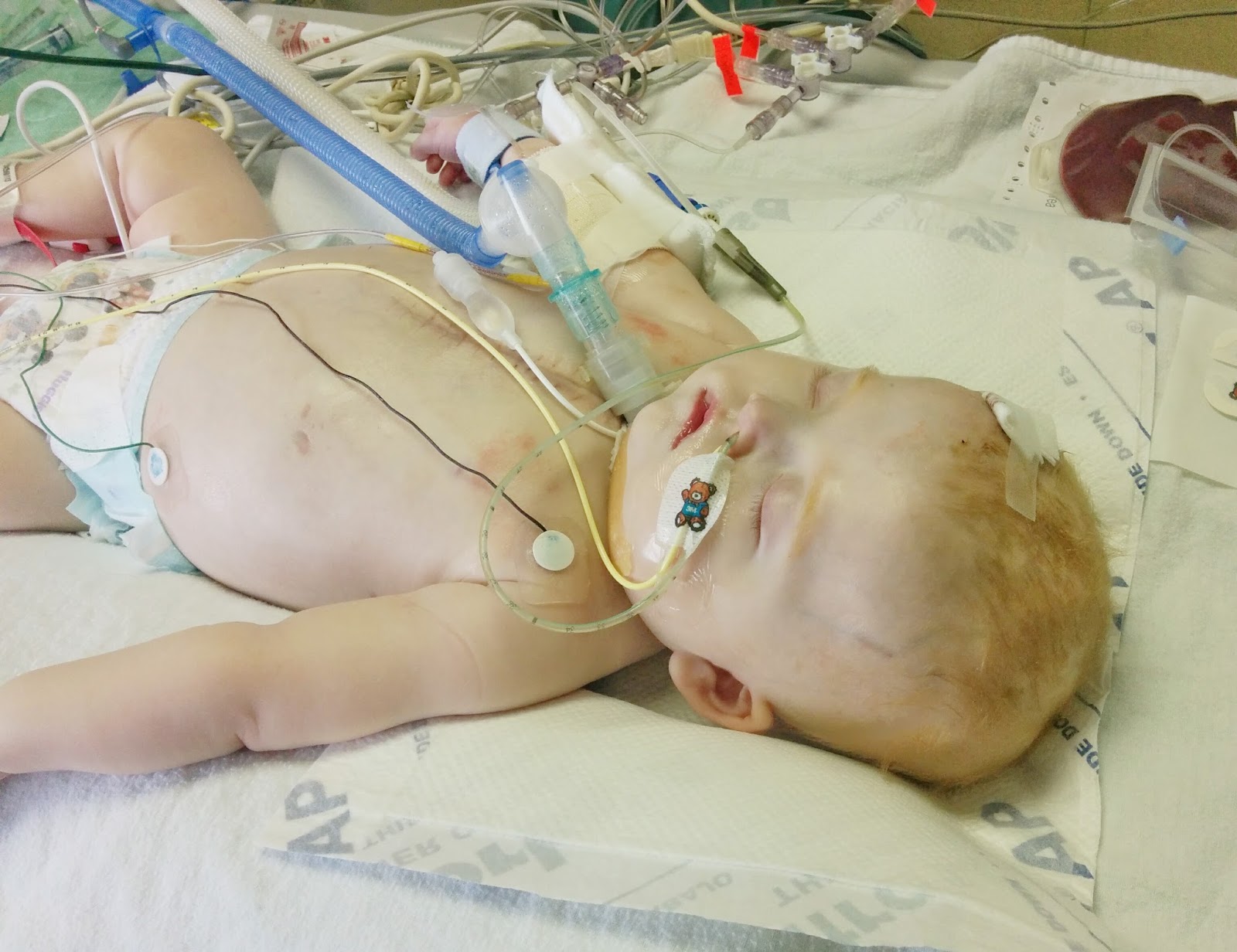 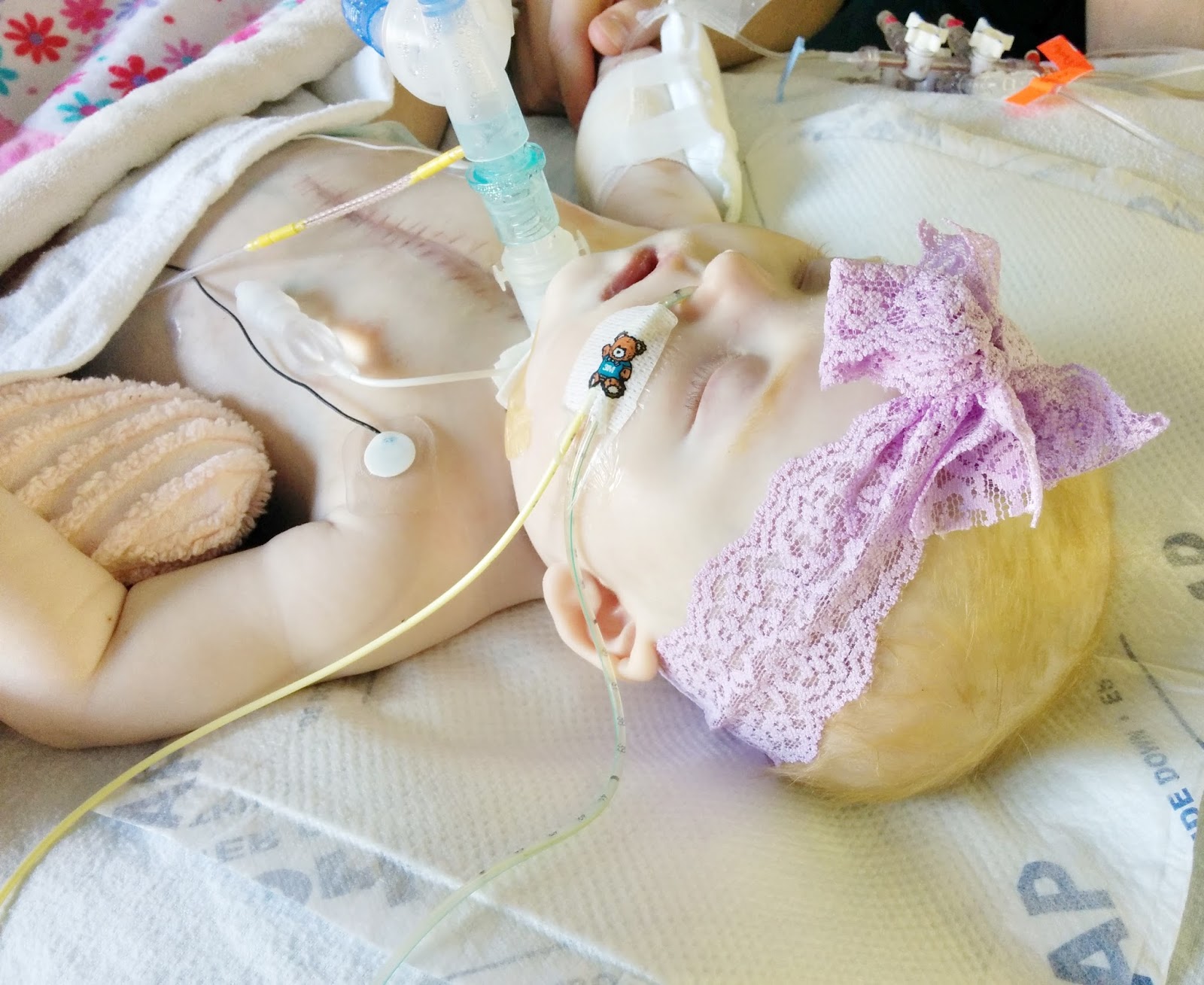 I finally have a moment to catch my breath, but I don't even know where to begin. Essentially Evanna's body was "shutting down", and things got critical real fast. Her extremities went really cold as her body was only sending blood to her heart and her head, meaning it was preserving only what it had to.
They're not quite sure what we're dealing with, so they're treating everything they can think of, but Dr. Ryerson's best guess is sepsis. They drew cultures, but we probably won't see any results until at least tomorrow. They also did a really long ECHO (I swear it was 2 hours long), and though her heart looks "okay", they definitely noticed a decrease in function and it doesn't have the same "squeeze" it normally does. Milrinone was started again (it's a drug that helps the heart pump), as well as some antibiotics to help fight off whatever this is. Evanna is being kept sedated and paralyzed for a little while to help her body recover, and let the medications and ventilator do the work it needs too. They also discovered that her abdomen looked a little weird when they did an xray, so they've consulted general surgery and will do sequence xrays tonight and tomorrow to see if it clears up. In case they need to proceed with surgery, they have switched Evanna over to IV heparin instead of her regular Warfarin (a blood thinner) so she won't bleed out if she goes to the OR.
They gave her some calcucium, sodium bicarb (as her bicarb went down the toilet), hydrocortisone (apparently studies have shown it helps antibiotics work better if Evanna does indeed have a sepsis infection), as well as some fluid boluses to help her heart function.
They wanted to give her another blood transfusion just to overall help Evanna, but as of right now they haven't had success in getting another line into Evanna (she's such a hard poke), so they might try again later tonight.

Though Evanna got extremely critical today ("pre-arrest" as our nurse has put it), she has drastically improved within a very short span of time. Dr. Aditia didn't believe her last gas as it was "too good", and had them run the again, but the results came back the same! Thank you to everyone that has kept Evanna in their thoughts and prayers today and we're just praying that she'll have a good night and be back to her regular self soon.