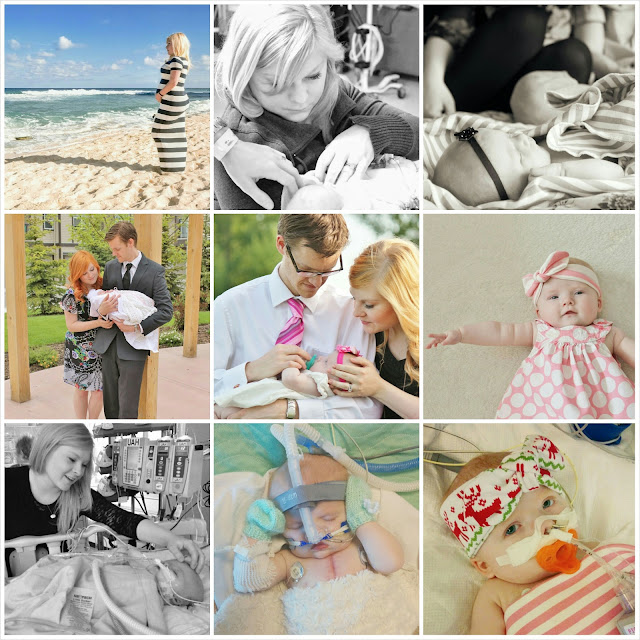 Well it's that time of year that I write my annual recap of the past 365 days for the Irvine Family. It was initially difficult for me to write this years post, but in hindsight, I am so glad that I did. In despite of everything we're currently going through, it has still been a good year. Our marriage is stronger then ever, we accomplished some major financial goals (other then a mortgage, we are completely debt free - including car and student loans, and increased our savings!), Nick got his Paramedic licence and got a permanent full time job with Calgary EMS, and we welcomed our beautiful little girl into the world. We've experienced so many things, lost a few relationships, gained so many new friends, and understand just how precious this life is. Though I'm ready to move past this current chapter, I'm trying my best to embrace this experience and learn from it. So here we go:

In January, Nick and I took the opportunity to go on a babymoon to Cancun, Mexico. With everything we had learned about our baby girl, we needed to get away to be alone as a couple, relax and digest what the rest of 2014 would be like for us. Besides the throwing up all the way there and all the way back (Nick isn't sure if we wants to fly with me anymore), it was a great trip.
A week after returning from Mexico, we headed to the mountains of Montana for a group ski trip (I promise, that at 6 months pregnant, I stayed far away from the ski hills). We stayed in the most beautiful cabin in the middle of nowhere and truly enjoyed the scenery and quietness that Montana had to offer.

February was a low key month as we geared up for a busy spring. At the beginning of March, Nick was offered a temporary full time position with Calgary EMS as a Paramedic, which was a HUGE blessing that came at the perfect time considering everything that was about to happen. Nick and I headed to Edmonton around mid March to meet with the cardiac medical team and celebrate our 2nd Anniversary a little early. It was a very busy couple of days with lots of information being thrown our way - it would make your head spin! We also celebrated my niece's 1st birthday and my best friend and sister threw me an amazing baby shower.

I finished my last few days of work at the beginning of April and relocated to Edmonton and moved into the Ronald McDonald House for the very first time. It was an extremely emotional time for me, as I was away from my close friends and family, as well as my husband who stayed back in Calgary to work as much as he could before the baby arrived. Finally, on April 28, I was induced, and Evanna was born on April 29 pink and crying (though an emergency c-section may have been involved....). It was a crazy couple of days proceeding, with finding out that Evanna's heart was even worse than we initially thought, having her flown back to the Calgary NICU as surgery was a no-go for the time being, and making sure she was healthy enough to be discharge home. After 10 days total in hospital, we were given the okay to take our sweet baby girl home.

May was a month of big adjustments as we got use to having a baby at home, and learning to be parents ourselves. Nick was offered a PERMANENT full time Paramedic position with Calgary EMS, and it was just nice to have a period of normalcy.
In June, we celebrated Nick's first Father's Day, and Evanna had her baby blessing on the same day. It was truly a special day, and probably one of my most favourite moments of 2014.

We finally made a trip back up to Edmonton for Evanna's very first Cardiac Cath in July and start making plans for her first open heart surgery. She handled it like a champ and we were home within 36 hrs.
August and September was spent soaking up the rest of Summer, and begin to keep our outings short and limited, as we wanted to keep Evanna in the best possible health for her upcoming surgery. We spent lots of quality time with our closest friends and family and soaked in every moment.

The day we had been waiting for, for almost a year, had finally arrived. On October 6, we handed our baby girl into the arms of a nurse who walked her into the OR where multiple doctors and surgeons awaited. It was a long morning and afternoon, but Dr. Rebeyka came out saying that the surgery went well. It was a hard few weeks of recovery, as we watched Evanna deal with sedation and withdrawal issues, failed extubations and another devastating diagnosis of Tracheomalacia. We experienced every parents worst nightmare in the early hours of October 28, when Evanna's heart stopped and she coded. It took 20 minutes of CPR to bring her back, and it's a night that we'll never forget. What we had hoped to be a relatively straightforward surgery and recovery, was any but that, and we would soon learn that we were in this for the long haul.
We finally had the opportunity to have Evanna transferred down to the Alberta Children's Hospital PICU in Calgary so we could be closer to home, but not much progress was made down there. Evanna failed another extubation and her heart went into failure. On December 2, we were transferred back up to the Stollery Hospital in Edmonton where she underwent her fourth rigid bronchoscopy and her second cardiac cath. On December 8th, Evanna had her third surgery performed by Dr. Rebeyka that took over 6.5 hours to complete, but because they know Evanna's history, she recovered a lot quicker.
We spent Christmas with Evanna still in the PCICU, but made the most of the situation. Nick worked New Years Eve, and I made sure to give Evanna a midnight kiss with a phone call from daddy to follow.

Overall it's been a year of some of our highest highs, and lowest lows. We're hopeful for a brighter and healthier New Year full of joy, happiness, and love.

Music: It Is Well by Kristene DiMarco
Written by Kierra Irvine
Email ThisBlogThis!Share to TwitterShare to FacebookShare to Pinterest