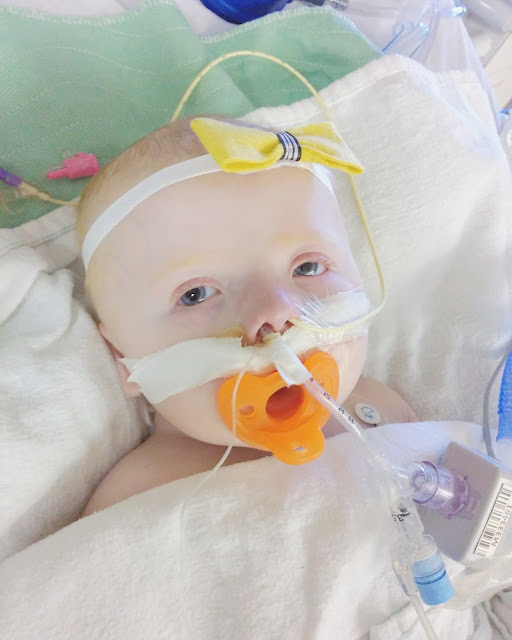 So Evanna was reintubated on Wednesday. It was definitely a hard pill to swallow (and lots of tears were involved), but it needed to be done. She fought SO HARD for SO LONG, but it just wasn't enough. We originally thought the next step would be a transfer back to Calgary to proceed with a tracheostomy - as this is the 5th failed extubation, however, a bronchoscopy done on Thursday showed a "dynamic compression" on her trachea, so plans of a tracheostomy have been put on hold until further investigation can be done on Monday to see if ANOTHER surgery should be done.
Here's how the last few days have played out:

Nick left Monday morning, and I headed to the hospital. It was a terrible day, and Evanna was completely miserable. They put her back on the full-face BiPAP mask in hopes that it would help, but it didn't make that much of a difference. I was slowly starting to realize that this extubation wasn't being the success that we needed, and Evanna was telling us that. We continued to try our best to make her comfortable and happy and push on, but I knew deep down that Evanna was growing tired and weak.
On Tuesday, things continued to get worse, and I was in tears with the state that Evanna was in. She was looking at me with the saddest eyes that I have ever seen, and finally we started to talk reintubation. Dr. Anand said that during Wednesday's intentivist meeting, they would discuss as a team the best step moving forward, and make sure that everyone was on the same page in regards to a decision. Well I stated that if the decision was going to intubate, why wait one more day and put Evanna through one more night of this. Dr. Ryerson was there for the night, and they had already called Dr. Cave (our primary intentivist) to get his opinion. I already knew what Dr. Duff's opinion would be from previous conversations, so I said that if Dr. Aditia was on board, then I would prefer that we did the intubation done that night vs making Evanna wait one more day. Well Dr. Aditia happen to be "working" that day, as he was "Nurse for the Day" - something the unit does every year to raise money for their social fund, and this year Dr. Aditia "won", which meant that he had to be a nurse for the day and do EVERYTHING that a nurse had to do. So they took him aside and asked his opinion on if they should reintubate Evanna. They went and studied her xrays, and Dr. Aditia wondered if maybe Evanna was being over ventilated and said that before they actually intubate her, just try her on high flow for a few minutes, as there was no harm in doing so. So they got everything ready to intubate her, as well as the high flow supplies. They switched out the mask for the nasal cannulas, and watched to see what Evanna would do. Surprisingly Evanna did amazing, and by the time I left for the night, Evanna was still on high flow! However at 2:30am, I got a phone call telling me that her CO2 was climbing and they needed to put Evanna back on the mask and try again tomorrow.

On Wednesday morning I came in, and we decided to try Evanna on high flow again, because of the "success" of Tuesday night. Evanna was hating the mask, and I was hoping that she would relax on high flow. Unfortunately, Evanna lasted only about an hour on high flow before her CO2 levels started to rise again and we needed to put her on BiPAP again. Her CO2 initially came down with the switch to BiPAP, but again her CO2 levels started to rise again, and when they reached 95, we had no choice but to finally come to the conclusion that she needed to be reintubated for her own safety. It was so heartbreaking to know that Evanna failed yet another extubation, and we now know that a tracheostomy is the next step. As much as Nick and I were originally resistant to the idea down in Calgary, we felt that we tried our best, and Edmonton did everything they could to avoid a trach, but we finally came to the realization that this was the only route in order for us to take her home. They kept Evanna pretty sedated for the rest of the day, as she needed to get some rest and sleep.

On Thursday we started to discuss plans for a transfer back down to Calgary to proceed with a tracheostomy. They called the Alberta Children's Hospital PICU, and they stated that they already had a bed available, and could take her that day. However, the Stollery wanted to make sure we were sending Evanna down in tip top shape to hopefully avoid another transfer back up to Edmonton if things were to go down hill (basically dot their i's, cross their t's, and tie up loose ends before we transferred Evanna). We asked that if it were okay, to arrange for a Friday morning transfer. An ECHO and bedside flex bronchoscopy were ordered and I left to attend the Corus Radiothon for the Stollery Foundation. When I came back the ECHO had already been done, and Dr. Eksteen had just arrived to begin the bronchoscopy. During the bronchoscopy, Dr. Eksteen saw a "dynamic compression", and plans for a transfer down to Calgary were immediately put on hold. Dr. Rebeyka was made aware of the bronchoscopy findings, and what this could possibly mean.

Yesterday (Friday), Dr. Rebeyka came by and talked to me about the plan for the next few days, and possibly the next step. He wants Evanna to have a second bronchoscopy on Monday to confirm what they saw, and if there is a compression, they will probably do another open heart surgery to either lift the conduit that they inserted during the first open heart surgery off of the trachea or insert a valve inside the conduit to make it more stiff and firm and not pulsate against the trachea causing it to collapse.

Basically Evanna WILL be having a 5th surgery, but what that entails (either the tracheostomy or another open heart surgery), won't be discussed until Monday when Evanna has another bronchoscopy. It has been a long few days, and this morning I'm finding myself a little drained of energy, and just overall exhausted both physically and emotionally. Tonight my parents are coming into town to be with Evanna while I attend part 2 of a Bachelorette party for my friend Bev who is getting married in February, for which I'm a bridesmaid. Like I stated in a Facebook and Instagram post, this is something that the doctors, nurses and social workers are extremely supportive of, and highly encourage me to go have fun and enjoy myself. They constantly talk about self care and being at my best here in the PCICU, in order to not run myself down and be in the best possible state for Evanna. I guess I just feel like I have to explain myself in fear of being judged for not being at the hospital. Truth of the matter is, I'm here at Evanna's bedside day in and day out. Though my life has been kind of put on pause for the past 3.5 months, the world has continued to still go on, and a break is warranted once in awhile.

Nick will be back in Edmonton tomorrow, and most importantly will be here on Monday when we have discussions on what our next step should be. We're a little reluctant on another possible open heart surgery because it means we're going back in through Evanna's sternum, AND it may not produce the results we need in order to bring Evanna home, and she'll still need a tracheostomy anyways. However, if we proceed with a tracheostomy, she may need it for a lot longer if we don't deal with this dynamic compression to begin with. It's definitely not going to be an easy decision, and it's a little frustrating to feel like we're back at square one again.

Thanks for reading, and hopefully I won't go too long between the next update. Again - thank you so much for each and every Facebook and Instagram comment. I may not respond all the time, but PLEASE know each one is read and appreciated all the same. And of course, please continue to pray for Miss Evanna, and that she'll continue to be strong and brave.

PS. Thank you to
Written by Kierra Irvine
Email ThisBlogThis!Share to TwitterShare to FacebookShare to Pinterest