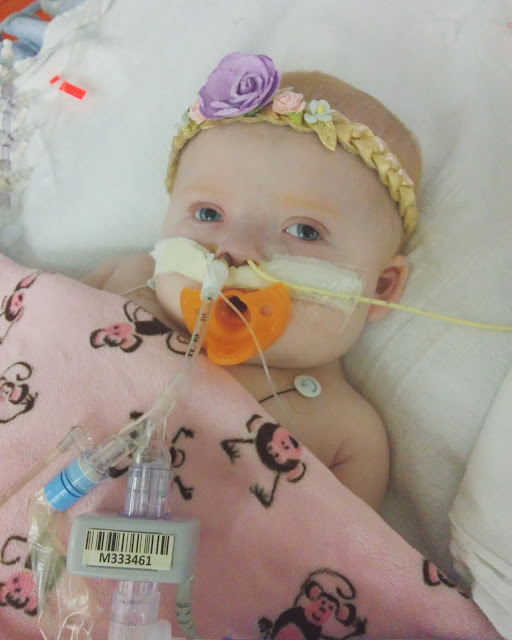 So this will be a much shorter update, as not too much has happened between my last update and now.
This past weekend was kind of slow, and so on that same token - it was also hard on me. I absolutely hate the days that nothing happens, and feel like we're wasting unnecessary days in the hospital. There was a reason as to why they waited until Monday for a new bronchoscopy - so though there was a legitimate reason for the quiet weekend, it still sucked.

They put Evanna back on Milrinone (a heart drug) on Friday and increased the dose over the weekend, because they wanted to see if they would have different bronchoscopy results with lower blood pressure running through her conduit and make a difference on the compression they saw. On Monday around 4:30pm, Dr. Eksteen came up ready to do the bronchoscopy, but unfortunately it was a little busy in the PCICU, so it was a little chaotic with intentivists and Dr. Rebeyka jumping back and forth between another patient and Evanna during the bronchoscopy. During the procedure, Dr. Eksteen noted that the "dynamic compression" was significantly less than it was on Thursday, and so a theory that lower blood pressure would help Evanna extubate was discussed. While everyone started to talk 6th extubation, I was starting to freak out on the inside because the last extubation took such a huge toll on me, and the last thing I want to do is waste anymore time on a silly theory. It was late in the evening, so real discussions of a plan were kind of done "half-assed" (I wish there was a more appropriate word to use, but it's the best way to describe it), and Nick and I weren't necessarily asked what we thought we should do.

Yesterday, we came in and began discussions of what we should do moving forward. We have a few days to figure it out, as Evanna has come down with a lung infection, so that will take a week or two for her to get over before we can proceed with anything. I am extremely hesitant to try another extubation, especially when the only difference is a simple change in blood pressure, and I am sceptical that it will really make a difference. My biggest fear is going through another extubation and wasting even more time in the hospital. So Dr. Anand asked that Nick and I discuss what WE wanted to do, and what we're comfortable with, and to let them know. I was really against trying another extubation, but Nick pointed out that why not give this "noninvasive" approach a chance before resorting to surgery. Evanna has been playing by her own rules, and surprising us when we don't think something is going to work, and proving us wrong when we do think something will work. I agreed to a 6th extubation, however, only as long as we set limitations. If we aren't able to wean Evanna within 3-4 days off of BiPAP onto high flow, then we will consider it a failed extubation, and we won't push Evanna like we did the last time - she's either going to extubate or not, and I don't want to do another 8 days on BiPAP, only to end back up at square one again. Both Nick and the intentivists were in agreement to my concerns and felt that the limitations were extremely fair.

So that's the plan - get Evanna over this lung infection, work on lowering her blood pressure and extubate her again. I am a tad sceptical that it will work, but of course I would love nothing more than for Evanna to prove me wrong. If Evanna fails this extubation, we will ask Dr. Rebeyka about the RV/PA conduit pexy (or valve placement) he was thinking of doing, and unless he REALLY thinks it will make a difference, we will move forward with a transfer back to Calgary and proceed with a tracheostomy.

It has definitely been a few hard days and weeks for myself, and I know lots of people have felt my stress and frustration. It's a rollercoaster and like Dr. Cave (our primary intentivist) pointed out, the constant change in plans isn't really fair on Nick and I, and they completely sympathise with us, and only want what's best for our family.
I've also come to realize that our prolonged hospital stay isn't what's bothering me, but it's that Evanna is STILL intubated and in the ICU. I in no way want to play down what other people have gone through - but though there are many people who also go through prolonged hospital stays, it's so much different when your child is in the PCICU and INTUBATED. I'm not able to sit Evanna up, hold and play with her. She has to remain flat on her back, and I'm growing distraught at how much time has passed and how not only is Evanna not developing, but has also lost all the skills she had going into surgery (rolling over, etc.). I know that she will bounce back, and we will be given resources to aid in helping Evanna catch up, but it's still something that weighs on me. At the bachelorette I attended this past weekend, a girl who was familiar with our story asked how Evanna was doing, and I responded that things were going okay (really - how am I suppose to answer that question??), and then asked how old Evanna was. I stated that she was almost 9 months old, and she responded by saying "Oh, my niece is 10 months old, and I just LOVE watching her grow and develop - isn't it amazing?" It took all my strength to not retaliate and punch her in the face. I was honestly shocked that she would say that to me. There are times I want to write a book on "things not to say to a mother with a child in the ICU". It honestly blows me away at some of the comments I get from time to time. I know most people just don't think about what they're saying and I'm sure I'm guilty of saying inappropriate things in the past, but still! lol

Anyways - Evanna has been having a good morning, and I feel like the antibiotics have finally kicked in. Her lungs are finally starting to clear up and sound clear, and we've been able to come back down on her PEEP (they had to go higher on the PEEP, as she required a bit more support). Later I'm going to ask when they're aiming to extubate again, and I'm going to better prepare myself mentally for this extubation. I realize that I was sort of in a funk over the past few days, especially when we didn't really have a plan (anyone who knows me, knows that I like to plan), but I feel much better, especially after coming to a decision yesterday that everyone has agreed with.

Thanks for your continued support.

This lovely and stunning gold leather and floral crown that Evanna is wearing today was made especially for her by Azlyn from Genuinely Made Shop on Etsy. She custom made it to fit Evanna, and I just love how unique and beautiful it is. Make sure to check out her shop to see and admire the rest of he work (her leather bows are equally beautiful)!
Written by Kierra Irvine
Email ThisBlogThis!Share to TwitterShare to FacebookShare to Pinterest