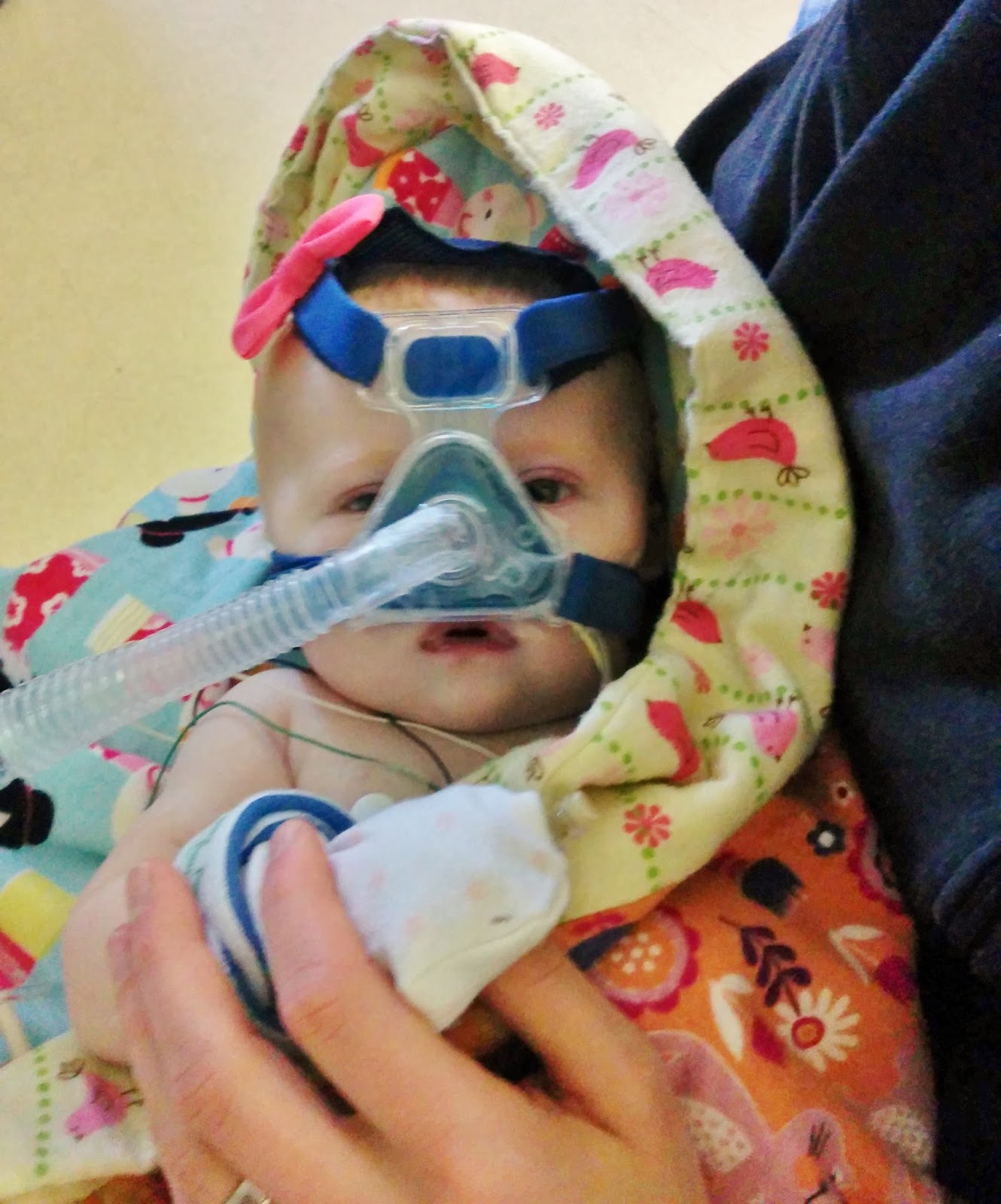 To say this has been a very stressful week, would be a huge understatement. So much is riding on this extubation, and it has definitely taken a toll on me. Ever since we've been back to Edmonton, I have never called in a night to check on Evanna, because I know she's just fine (plus I know they would call me if there were any concerns). However, ever since Evanna has been extubated, I've called at least twice every evening. My nerves are at an all time high, and I just want this part to be over with.
The big problem we were experiencing, is if something were to happen and Evanna gets extremely upset, they can't really sedate her too much, because that would mean she would stop breathing. So there's a fine line between keeping her comfortable and happy, and over sedating her to the point that she stops breathing, they have to reintubate her, and we're back to square one and proceeding with a tracheotomy.
Anyways, I'm going to go over what has happened over the past week, so bear with me. I know I've already posted about her extubation on Facebook and Instagram, but this blog is a true journal of this journey, and I want to document everything fully, as I plan to print this sometime in the future.

So since my last post, we were able to decrease her PEEP to 6 on the ventilator by Monday, which meant that a Tuesday extubation was a GO! Dr. Aditia was extremely disappointed that he wasn't going to be the one to do it because he was off to China first thing in the morning, meaning that Dr. Ryerson got the honour of being the one to extubate Evanna (the intentivists are incredibly competitive with each other - it's actually quite funny). Her extubation happened to fall on Day 100 of us being in the ICU, and so I'm hoping that means something. Like I expected, the extubation went smoothly, and I even got to take a picture of her before they put the BiPAP mask on her. It was a great day filled with so much hope and joy as we made this big step. Once things were settled down, I even got to hold her, and according to my calculations, it was the first time that I had held her in 44 days. 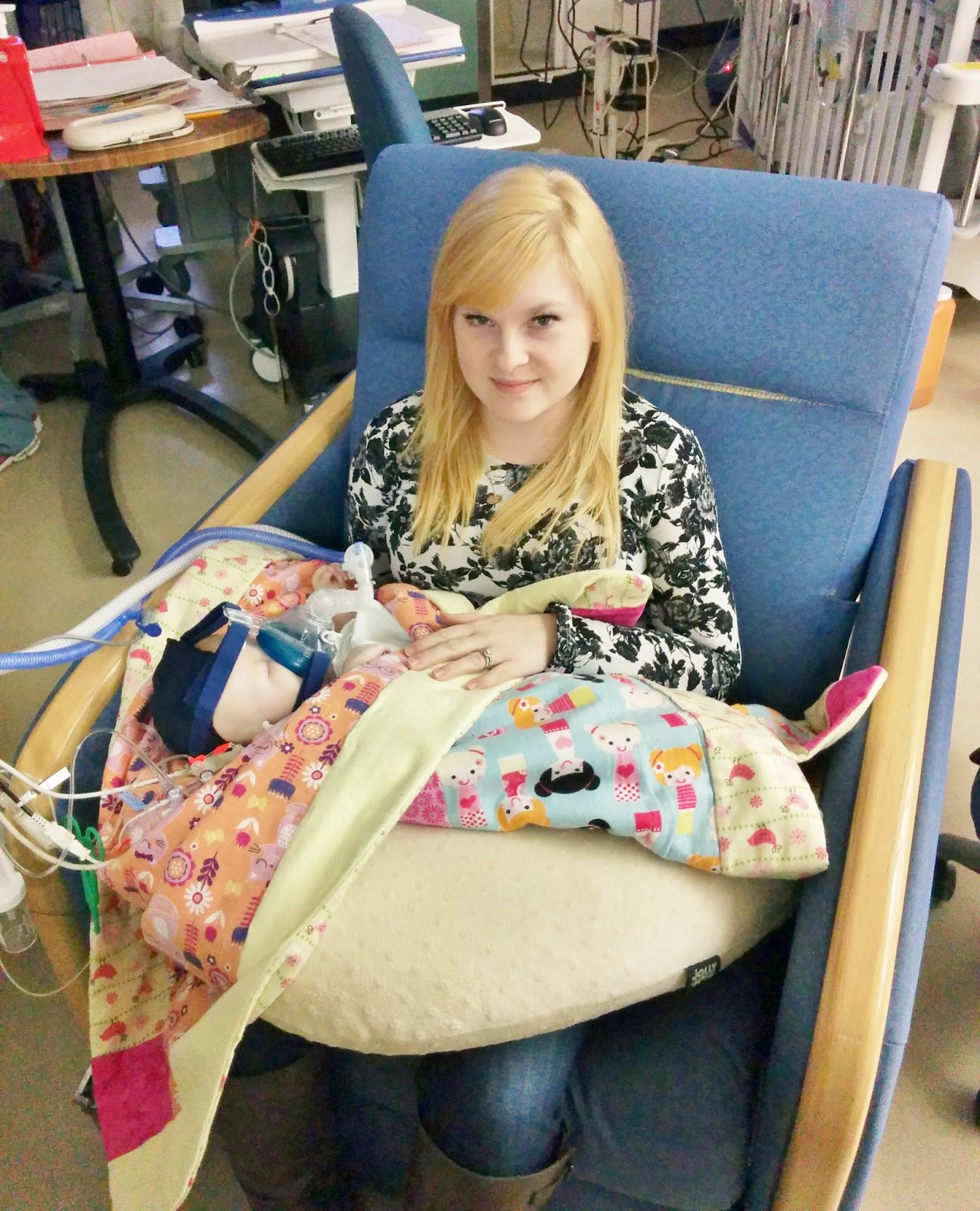 I came in on Wednesday, and Evanna had had a good night. The nurse asked if I wanted to put an outfit on her, but I told her that when we were transferred back up to Edmonton I hadn't bothered to bring any of Evanna's clothes this time because I didn't think there was a point. So I raced over to West Edmonton Mall and bought a few cute onesie’s from Carter's, and even found matching bows at H&M while quickly shopping for myself. I came back and got her dressed up, and decided to hold her again. That evening we tried her on nasal BiPAP, but she didn't do as well as they thought she would, so they switched her back to the full face mask. She also became really irritable that night, and so this is when my stress levels started to climb, as she wasn’t doing as well as I had hoped.

I came in on Thursday, and she was doing okay. Her evening was kind of rough, but she had settled out and was doing much better. They switched her ventilator settings to CPAP, but within a few hours her CO2 started to rise again, so they went back to BiPAP settings and left her there. Dr. Ryerson started to indicate that she was a little disappointed in the progress that Evanna was making, and unsure of how this extubation was going to go. She stated that she's not ready to give up on Evanna, but that I needed to know that a tracheotomy may still be on the table as an option for her. That evening, things just got worse. According to their calculations, they didn't decrease her medications when they extubated her, but I felt that Evanna was definitely experiencing withdrawals. Her heart rate went up to the 200s and stayed like that for hours, she was flailing around and nothing I was did would calm her down, her temperature was increased and she was tongue thrusting - all signs of withdrawal. It takes a lot for me to freak out (I've seen Evanna code, so I feel like I've practically seen it all), but I was truly going into panic mode. I called Nick multiple times to keep him in the loop, and I was so close to asking him to leave work and drive up to Edmonton as I felt she was about to fail this extubation. Dr. Duff was our intentivist for the night, and he too was worried that we were going to have to reintubate her again. He decided to "throw the kitchen sink at her" (his words lol), and do everything possible, just short of reintubating her, as he too didn't want Evanna to fail this extubation. We upped her Milrinone (it's a drug that helps the heart pump), drew cultures, started antibiotics, gave her fluid (a dry body can be really hard on the heart), and upped her sedation doses. Finally around 11pm, things started to settle down, so I finally left to get some sleep.
I called at 5am to check on her, and Dr. Duff answered the phone and said that he hasn't had to touch her and for me to go back to bed and get some sleep.

Things settled a little bit on Friday, but my nerves were at an all time high. Considering how things were going, I was terrified that Evanna was failing this extubation. She had an incredibly good day with her O2 in the 80s and her heart rate going as low as 140. They came back down on her Milrinone, as well as some of her sedation. However, come evening, Evanna started to act up a little bit (we're noticing a pattern here...), and was completely miserable. It wasn't as bad as the previous night, but she was still a little restless, and her heart rate went up again. They gave her some extra doses of hydromorphine, which seemed to help, and I was told they had to do that a few times throughout the night.

Evanna had a pretty good day yesterday, and I was so relieved to know that Nick was on his way up to Edmonton. I was still really stressed and emotional during rounds, so I was definitely in tears when Dr. Anand came by. I stated that while I know Evanna isn't the number one priority on the unit, and there are sicker kids than her here, that I need Evanna to be a priority for the next week, as I really want this extubation to be successful. Dr. Anand assured me that Evanna is a priority, and that he will definitely work with us to make sure she is given the best chance possible to succeed. I definitely felt a lot better after that, and I have since felt that my wishes are being met. We switched her to a nasal mask again, and though Evanna's CO2 levels initially rose, we waited it out and they came back down. I also noticed that her hemoglobin was low (I'm the first person to grab the blood gas results from the RT’s and read them myself to see how Evanna is doing), and so I asked Dr. Anand if we could think about doing a transfusion, as they always help boost her energy and keep her sats higher (this is why blood donation is so incredibly important!!). Dr. Anand agreed with me, and when I left to go pick Nick up, they started a blood transfusion (what a little vampire!).
After I picked Nick up, we grabbed a quick bite to eat, and came back to the hospital to see Evanna for a little bit. We didn't stay too long, as Nick had just gotten off work himself that morning, but we waited until her 8 o'clock blood gas to be done before we left (my life is currently revolving around blood gas time - a sign we've been in the PCICU for too long lol).

Today has been a relatively good day. They finally turned off her Milrinone, but that was it in regards to changes made for the day. She hasn't necessarily been on it because of heart failure lately, but it was a drug they started when we were back in Calgary (when she was experiencing heart failure), and because she ended up being on it for a long time, it's something they've also had to slowly wean. They left her ventilator settings alone, and if she has a good night, they will hopefully do a small decrease tomorrow. On a positive note, Nick got to hold Evanna today, and again, according to my calculations, it's been 64 days since he last held her. He was one happy dad! 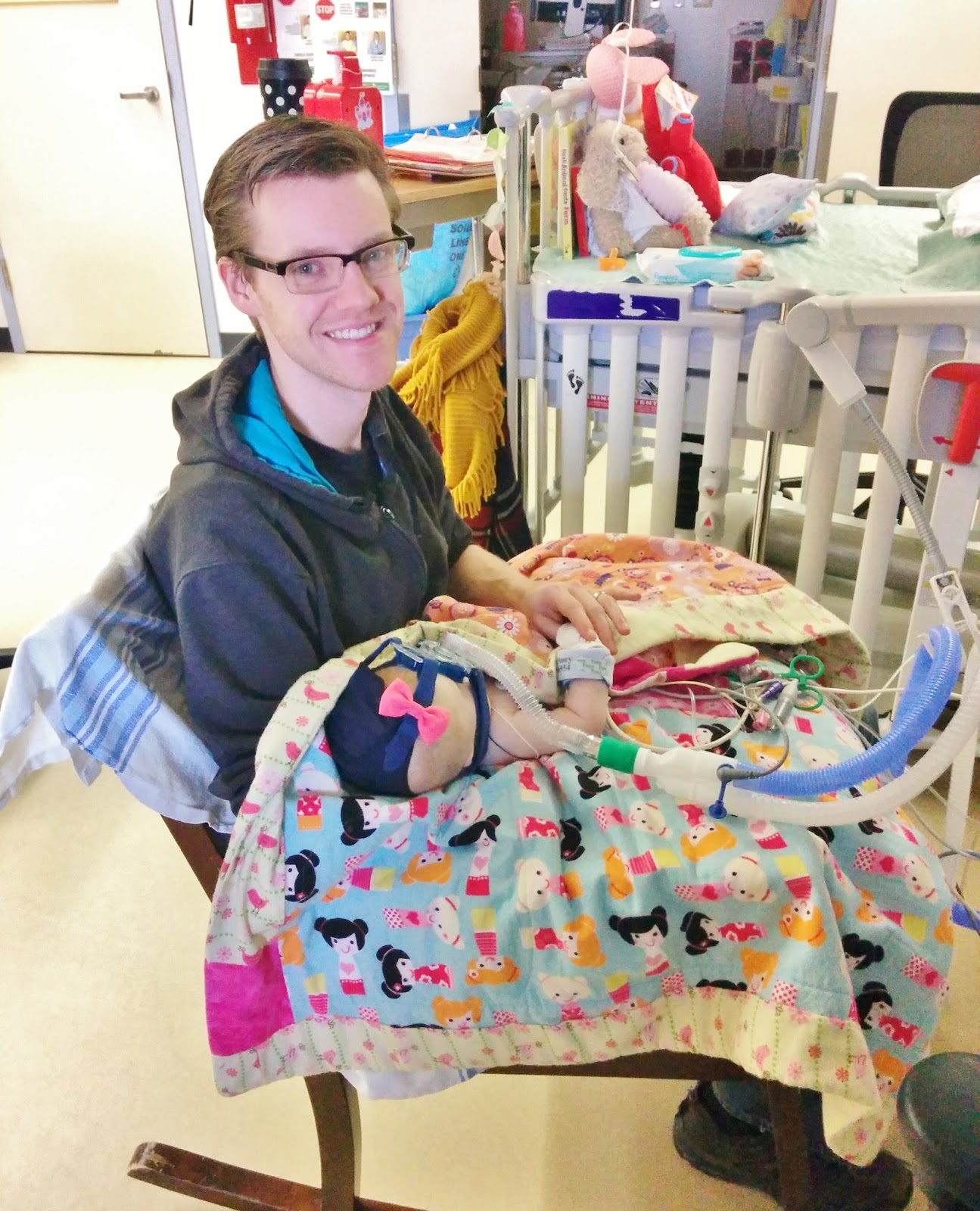 That's basically the story of our lives - slow and steady. We're still not out of the woods in regards to the extubation, and I won't consider this a successful extubation until we're on high flow. However, she is still extubated (it's been longer than 4 days too), and still doing relatively well, so I’ll take it. I'm scared that she's going to fail and she'll end up getting a tracheotomy (not the worst thing in the world, but would still love to avoid one), and I really just want to fast forward this part. Evanna hates the mask, and this process has definitely been hard on me. I too hate the mask, and I really hate all the unknowns of whether Evanna is going to succeed or not and if we're doing this all for nothing.
Please continue to pray for our little girl, and that she will be comforted during this not so pleasant part, and that she will continue to get stronger every day and come off of the BiPAP and CPAP - and quickly too!