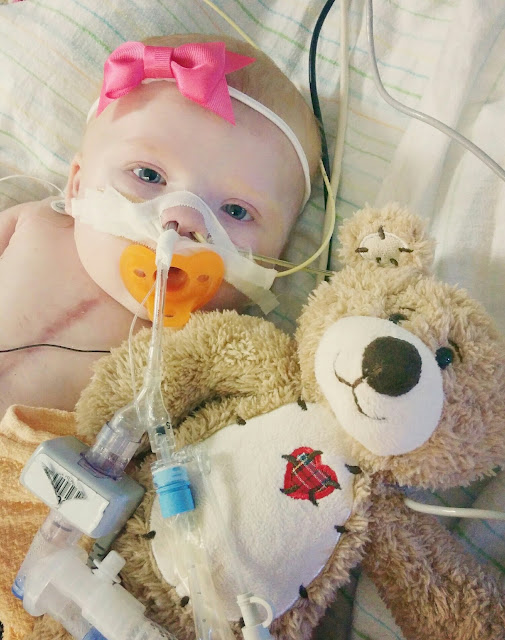 So Evanna has so kindly reminded us of who is in charge of the show, and that she will do things when she is good and ready. Evanna is still intubated, but the intentivists are confident that we'll get back to our PEEP of 6 and extubate early next week.

Before I proceed, I want to explain the definition of PEEP again. I'm pretty sure I briefly described what PEEP was a few posts back, but it doesn't hurt to go over it again, so everyone truly understands why we've been in this hospital for SO LONG! PEEP stands for "Positive end-expiratory pressure". Basically in laymen terms, it's the amount of pressure being blown into Evanna's airways to help keep her trachea (airway) and lungs open. Because Evanna has tracheomalacia ("weak trachea"), she needed a higher level of pressure to help keep everything open. They generally don't extubate until a PEEP level of 5 or 6, but they WILL try at PEEP of 8 to non-invasive support (so a big CPAP or BiPAP mask) that will still provide the pressure without having a big tube stuck down their throat (which is what we've done in the past). This has been our biggest battle with Evanna - weaning down her PEEP. Evanna has never handled the decrease, and her oxygen levels would drop, her lactate and CO2 levels would climb very high (which makes you very tired), and her "work of breathing" would increase and she would have to work incredibly hard just to breath. We think resectioning her subclavina off of the back of her trachea helped a lot, because according to Dr. Rebeyka, he was quite surprised how much pressure it was putting on her little airway.
This is why Evanna was facing the possibility of having a trach (and it's still on the table, as we're not out of the woods), and why we're so excited that Evanna has FINALLY been able to wean down to a PEEP of 6! In the past, every time we got down to a PEEP of 8, we would end up going back up to a PEEP of 10, 12, and even 14, and it was a never ending circle of constantly playing with her ventilator settings. Anyways, we finally got down to a PEEP of 6, even with a "crappy" diaphragm, and that's why they think she'll finally successfully extubate after this plication surgery that she had on Tuesday (which entailed them going in and "pinning" down her diaphragm).

So though Evanna was initially doing well after her plication surgery, things didn't go so well later that evening. They had to increase her ventilator settings (her PEEP was increased to a 10), and she basically confused the intentivists for a couple of days when she would wake up and fight the ventilator. They would raise her rate to 28 (meaning the ventilator would give her 28 breaths/minute), but Evanna would only take 8 breaths, meaning she would resist 20 breaths every minute. The RT's would joke that Evanna had abs of steal and were in disbelief at how hard she was fighting the ventilator. Because Evanna was fighting so hard, her CO2 levels would climb like crazy, and her O2 levels would drop. The only thing that would snap her out of it for a little bit would be to paralyse her so she would stop fighting the ventilator and let her body get the oxygen that it needed. While this was a quick solution, it wasn't something that the intentivists wanted to keep doing over and over again, because it really wasn't solving anything. Finally after a few shifts of Evanna doing her "episodes", Dr. Ryerson decided to recalculate her pain medications, and she figured out that Evanna really wasn't getting any additional pain medications since her surgery, and that she was basically on the same levels that she was going into surgery. Evanna is on such high levels of pain and sedation medications, but because she's been on them for so long, her tolerance is also really high. So Evanna was in pain, and she was holding her breath in response to that.  Thoracotomy surgeries are very painful, and this being a "redo" surgery, we were also dealing with scar tissue, so poor Evanna was in a lot of pain, and overall it has been a crappy few days of recovery (I won't name who, but please know that the intentivist that was in charge this week felt truly terrible once we realized the problem. Evanna is on such high doses of pain and sedation medications already, and so it was a honest mistake). Anyways, since we fixed the problem, Evanna has been doing wonderfully. She's been wide awake and content as can be. She's currently back down to a PEEP of 8, and we're hoping to get back down to a PEEP of 6 by Monday (we're going at Evanna's speed) and extubate a day or two after that.

Thanks for continuing to follow along and the continued prayers and support!

PS. This adorable bear was delivered to us here at the Stollery from our best friends Matt and Amanda a few weeks ago. Evanna is seriously one spoiled baby, but I'm beyond grateful how many people love our little girl.
The headband comes from Analise Cranney - an Instagram follower, and was made by Summer Sariah Bows. A few weeks ago, Analise sent me a message asking me if we needed anything (financially), and when I assured her that we were just fine, she still inquired if there was anything she could do. Well I jokingly said "send more headbands!" and that's absolutely what she did. She contacted 3 friends who make headbands and had some sent to us. Thanks Analise and Sariah for the cute bows!
Written by Kierra Irvine
Email ThisBlogThis!Share to TwitterShare to FacebookShare to Pinterest