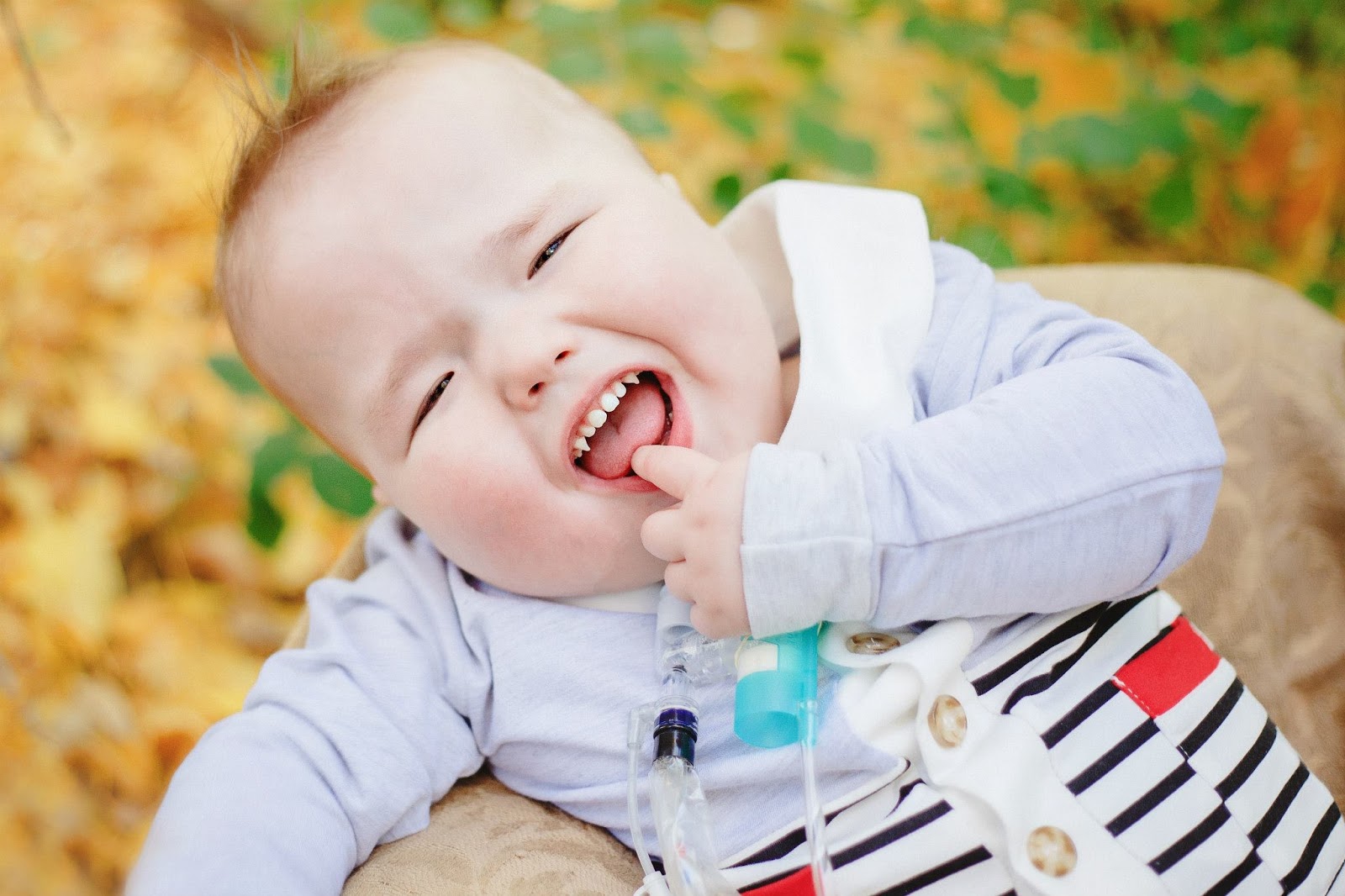 Congenital Heart Disease was something I was not familiar with at all. It was nothing that had ever crossed my mind until I became pregnant with my sweet son Garrett. When I was 24 weeks pregnant, I had a routine level 1 ultrasound, and the tech had noticed something wrong with our son’s heart. It was such a hard day, and I just had this gut wrenching feeling in my stomach that something wasn’t right. We waited for 2 weeks before we could get into see a specialist to have a fetal-echocardiogram, and when we did, they could tell us exactly what it was that our baby boy had. Garrett had a very complex and very rare heart condition called Tetralogy of Fallot with Absent Pulmonary Valve. This specific heart condition is a very complex one that affects the heart and also the airways leading to the lungs. They told us that Garrett would have about a 70% chance of survival once he was born, and that this was a very grim diagnosis. Because you cannot see the airways on ultrasound, until Garrett was born, we didn’t know if he would will be breathing on his own, or not breathing at all. Mine and Jake’s (my husband) hearts just broke. We didn’t know what to think or feel in that moment, but we knew no matter what, we were going to do all that we could for our sweet, and amazing little fighter! 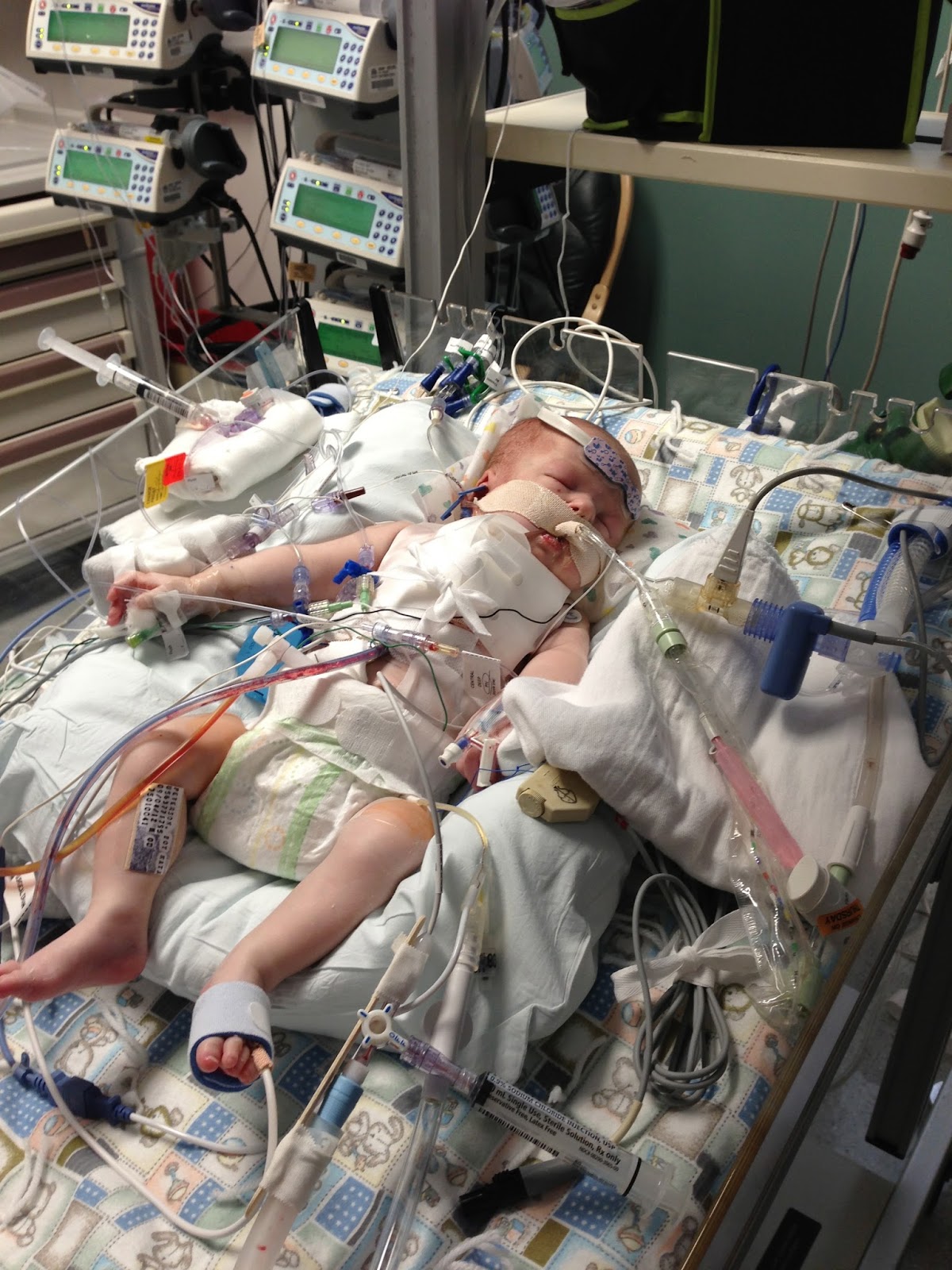 Garrett was born on Sept. 4, 2012 in SLC, UT. When Garrett was born, he was not breathing on his own, and immediately after birth, was intubated and placed on a ventilator. He was very sick, and it took about 6 hours after he was born to just to get him stable enough to walk over to the adjacent children’s hospital. I was able to only see him for about 30 seconds before Lifeflight rushed him off to the NICU at Primary Children's Hospital. It was heartbreaking, and not how I pictured meeting my sweet first born baby. They tried Garrett on 4 different ventilators, hoping that one of them would help stabilize his labs and help him move air. Their last resort was a specialized ventilator that the hospital had only had for about a year. They placed Garrett on his belly to help elevate the pressure from his very large pulmonary arteries, and finally after all of this, he became somewhat “stable”. Once Garrett was stable, he had to be heavily sedated just to help him tolerate the simple things, such as a diaper change. Due to his floppy airways, Garrett could turn blue instantly – sometimes multiple times during the day, just by getting slightly upset. This was the scariest and hardest thing to witness. Because of his critical state, we couldn’t hold Garrett either, which was so incredibly heartbreaking. As a mother, you just want to fix everything, and knowing I couldn't, was a harsh reality.
At 3 weeks old, Garrett had his first open heart surgery. We were so blessed that the 5 hour surgery went very smoothly. The surgeon told us that he was able to fix the heart problems, but his airway problems could not be fixed with surgery. The only thing we could do was wait for him to get bigger and stronger. The days and weeks following surgery were an absolute roller coaster – with more bad days, than good ones. Garrett was still on his ventilator and struggling to come down on the support. He was also having a difficult time being weaned off his medications, and we found ourselves going up on support and up on his medications. 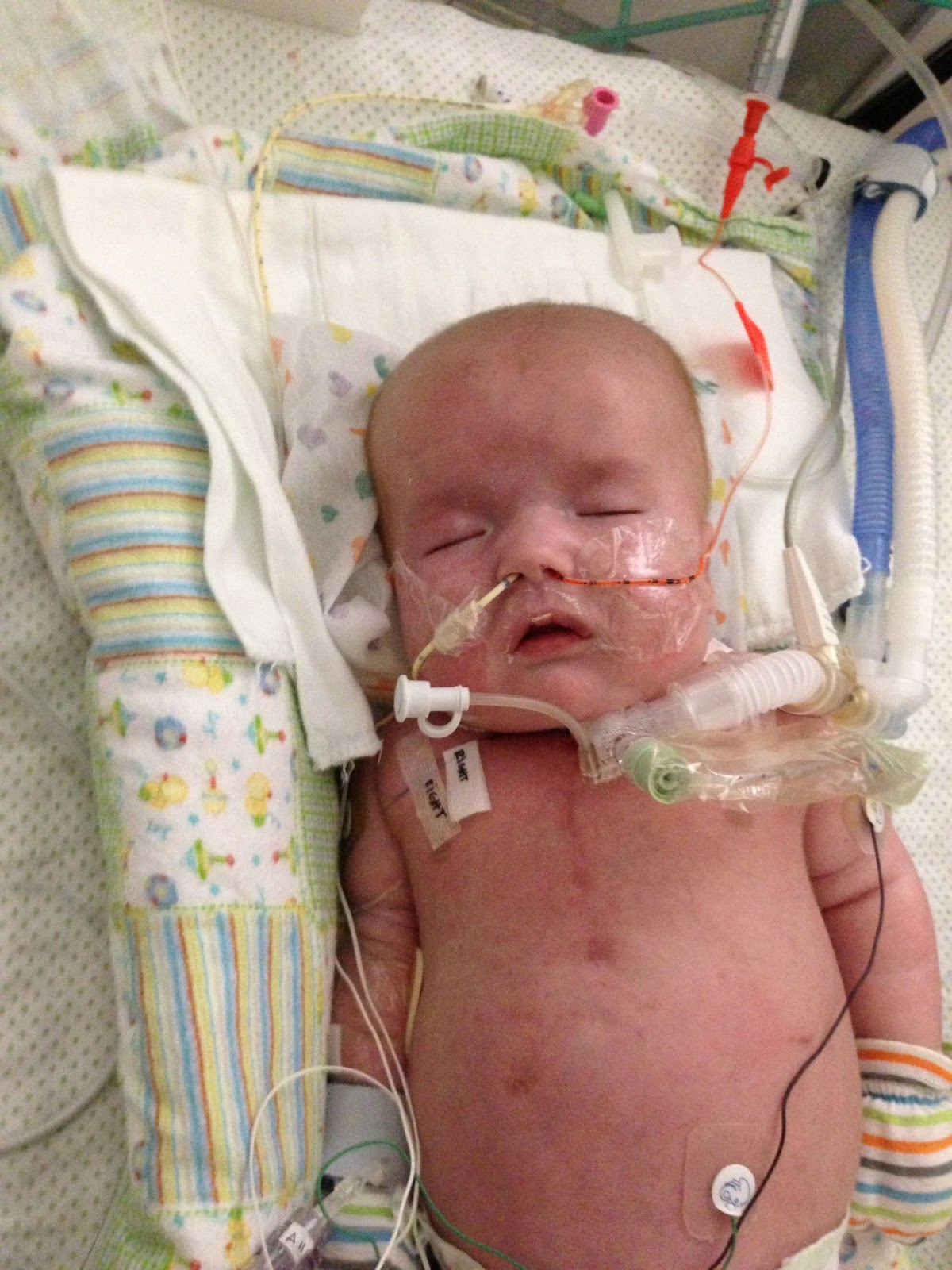 Months passed, and Garrett was growing, however, his airways sadly were not, and we found ourselves still in the NICU. At 3 months old, Garrett was still on the vent, and he received a trach. He would still have "blue spells" as we called them, and though they weren't as frequent, they still hadn’t stopped. We felt so helpless, but our faith stayed strong. We continually prayed for a miracle for our strong boy. We prayed for strength to get through the next day, and that the doctors would know what to do to get him better, and get him home. Leaving him every night in the NICU was heart wrenching, and so many times I wished I could take his place.

Thirteen months passed, and Garrett was still struggling. Over the months we had also increased the ventilation support, and we ended up maxing out the ventilator settings – even higher than most adults would be on. Garrett’s vent settings were so high, but because he was still having blue spells, we were not able to take him home. We would spend all day everyday with him in the NICU, holding him, reading books, playing, watching movies, and doing all of his cares. He was transferred out of the NICU to a step-down facility about 20 minutes away in hopes that we could keep trying him on the home ventilator, and hopefully continue to wean down the support he was on. 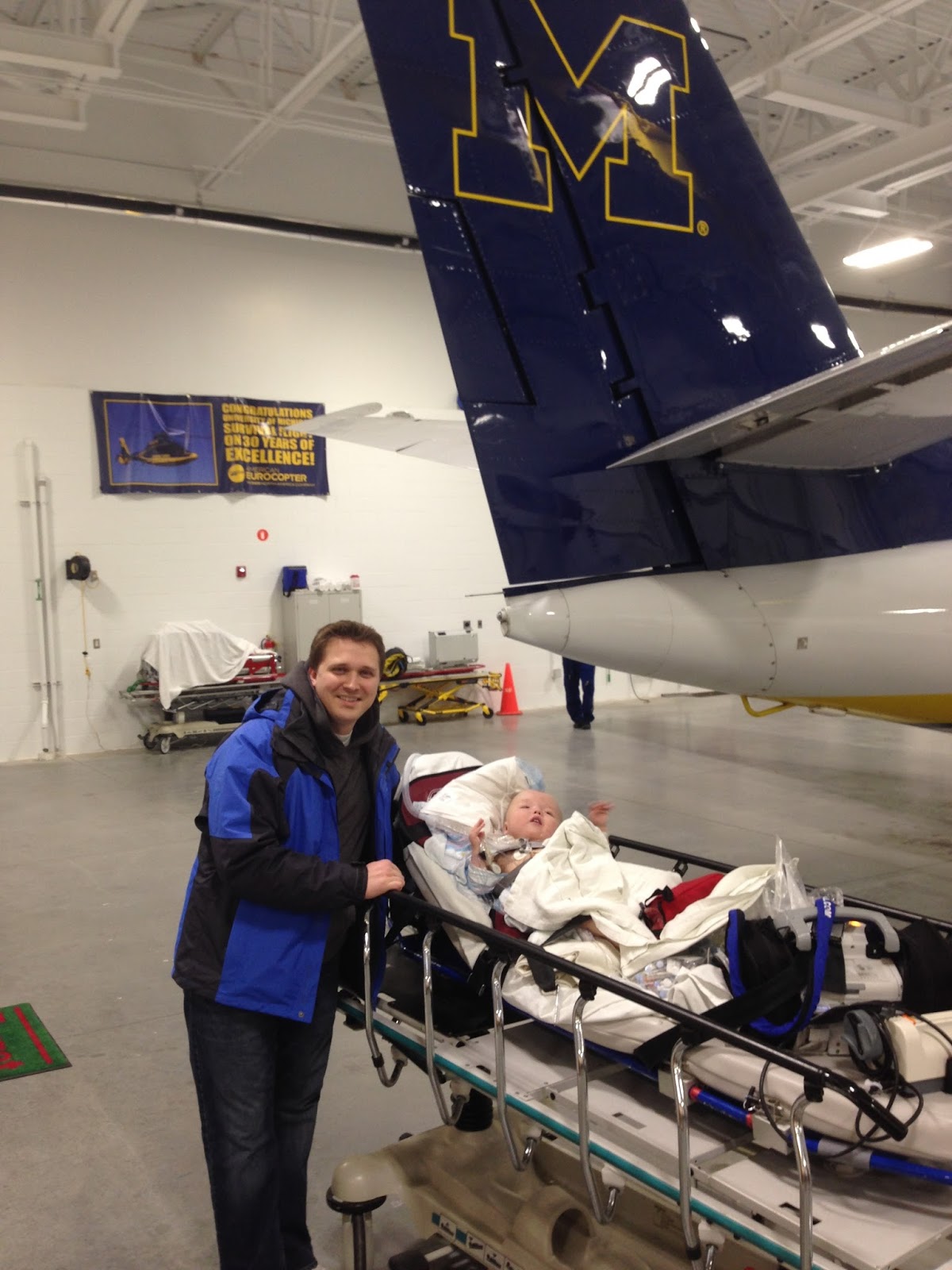 In December of 2013, Garrett became very ill with a horrible stomach virus, which landed him in the PICU fighting for his life. We were weeks away from losing our sweet boy. Garrett’s lungs, because of the high support, were expanding so large, that they were pushing on his rib cage. Garrett needed help, and he needed it soon. We decided to contact a Doctor in Michigan that we had read about in a CNN article some months back. We wanted to see if they possibly thought Garrett might be a candidate for their new and special air splints. It was a non-FDA approved surgery, and it had only been done on one child before Garrett. Jake and I really felt that is was Garrett’s best and only chance.
We had briefly talked to the amazing ENT surgeon Dr. Green in Michigan just a few months prior, but the timing just didn’t feel right then. However, now we were ready. Dr. Green told us about these airway splints that are made with a 3D printer and would fit and be placed on the outside of Garrett’s airways – to help hold them open. The thought of another surgery, traveling across the country, trusting doctors we had never met with our son’s life, and not knowing where we were going to live, was incredibly overwhelming. But we got the strongest feeling that that this was Garrett's chance, and it exactly what we needed to do. So we called Dr. Green back and told him that we were ready to come. We sent him Garrett’s updated scans, and we waited for approval from our insurance. Within 6 days, we were on a plane and heading to Michigan. The way things fell into place, and went so smoothly to get Garrett there, was nothing short of a miracle itself, and a confirmation that this was the right decision for our sweet boy.
Garrett was the second child to have this non FDA approved surgery. On January 31, 2014, we handed Garrett over to Dr. Green’s medical team for 7 hour surgery. It was one of the longest, and scariest days of our life. When the surgery finished, the doctors came to talk to us with the biggest grins on their faces - we knew it that was a good sign! Things went perfectly! Garrett came out of surgery on half the vent support that he went in with. It was a miracle! We felt like we could finally see a light at the end of this never ending tunnel. We all just cried. It almost felt too good to be true. It was an answer to our prayers, years of prayers and waiting.

The coming weeks Garrett continued to get stronger. His labs started getting better and better, and the medications he was needing were able to be weaned. He was happier, smiling more, and so much more awake. Garrett never had "blue spell" again. Soon, Garrett transitioned to a home vent on very minimal support, which was something he couldn't tolerate prior to surgery for more than just 5 minutes.

After 3 months in Michigan, we were on a plane back home to Utah! We had just witnessed miracle after miracle during our stay in Michigan, and so Michigan will always hold a place in our hearts.
Finally on April 1, 2014, we brought our sweet Garrett home – just shy of being 19 months old! What an amazingly happy day that was! Once we wondered if that would ever happen...and here we are – HOME! The drive home with Garrett in the backseat felt like a dream. Jake and I couldn’t believe that after 19 of the hardest months of our life, our sweet baby boy was coming HOME.
Since then, Garrett has gotten so much stronger! We celebrated his 2nd Birthday here at home with close friends and family this past September. His last ECHO confirmed that his heart is functioning great, and we don’t need to go back for 9 months. He’s such a happy, easy going, Mickey Mouse loving boy! He now spends most of his day off of the vent, playing with toys, mastering rolling all over our family room, and is starting to scoot/army crawl. We feel incredibly grateful for each and every day we get to spend with him! Garrett is our hero.

What does CHD Awareness mean to me?

CHD awareness is so very near and dear to my heart now. It’s a group I never knew existed until we found out about our Garrett. I believe it is SO important to raise awareness, because it can happen to anyone. No one in my family, prior to Garrett, have ever had severe heart conditions. It is random, and it can happen to anyone out there. Knowing the basic facts, can help save a child. Not all children are diagnosed in utero. There are many times it isn’t detected until the baby is born, or even weeks later that the heart condition can manifest itself. Please, make sure your baby has an oxygen saturation test in the hospital before you take them home. This is one very easy, non-invasive way to possibly catch a CHD. I know many states, mine included, that are passing laws that each child to have this test before they go home. I’m so happy to hear that!
If you know someone with a CHD, keep in touch with them. Ask how they're doing, ask how their baby is. I always was so happy when people would ask me about Garrett - I LOVE talking about my amazing, hero boy! Let them know you care. Having a child with a CHD is a lifelong road. There is no cure. Garrett was born without a Pulmonary Valve, so as he grows it will need to be replaced. There are more heart surgeries in our future, but we’re just taking it one day at a time, and living every day to its fullest! We feel so grateful that we still have our sweet boy with us, as he is such a joy to have around!

Lemon Squeezy Home to read about Kaitlyn and Mattingly


The Paper Deer Photography Blog to read about Haley
Written by Kierra Irvine
Email ThisBlogThis!Share to TwitterShare to FacebookShare to Pinterest