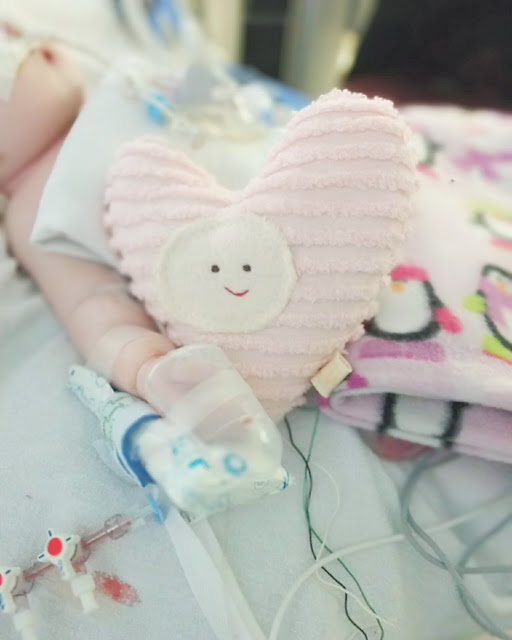 So while the past 24 have been a bit rougher with Evanna, I'm still going to say that overall, this recovery has gone a lot smoother compared to previous surgeries. For those who many not remember, Evanna's recovery after her last 2 major surgeries (I'm not counting the diaphragm plications), were much more of a rollercoaster, as she needed a lot more sedation, and even required being paralyzed multiple times.

Evanna had a pretty good day yesterday. She kept having higher than normal O2 levels (well high for her), and so they had to keep coming down some ventilator settings multiple times throughout the day. The doctors were able to find a good balance in regards to her sedation, as she seemed somewhat comfortable, and would even open her eyes from time to time. Though she was very groggy and "stoned", she still would look at Nick and I and knew that we were there.

Today has been a little rougher. Evanna threw up last night, and so they had to stop feeds and insert an NJ tube before they could restart feeds again. She's VERY puffy, and they also had to give her another blood transfusion as her hemoglobin levels were trending down again. Also - they had put a new arterial line in last night, as the one she had in, had been there since the beginning of January, and it wasn't drawing blood anymore among other issues. I'm a little annoyed because we (well the intentivists) had asked for a new arterial line when she went to the OR, but she came back from surgery with the exact same line. So basically, the whole arterial line situation could have been avoided if the OR had put a new one in like we had asked.

Anyways, I'm hoping Evanna's day gets better so we can continue to decrease her ventilator support. Dr. Cave mentioned yesterday that the bronchoscopy video from Monday is "floating around" among the medical team (he made it sound like it had gone viral lol), and everyone is a little more hopeful that she'll extubate (Nick and I are still on the fence about it, and we don't want to get our hopes up just yet). We've slowly begun to discuss a transfer back to Calgary, but until Evanna is much more recovered, nothing is set in stone.

Thanks for the continued prayers and support,