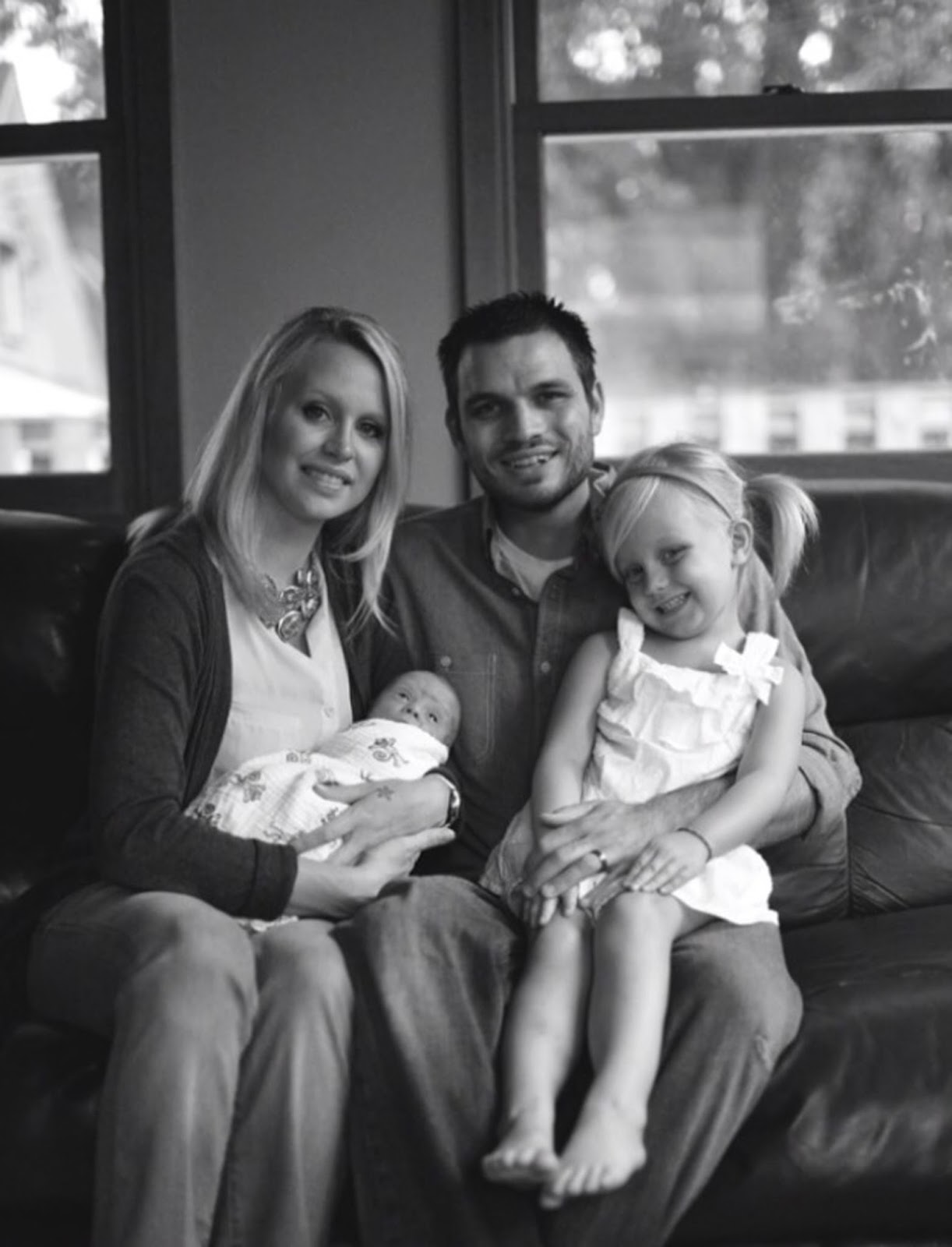 At Logan's two week check-up, I knew something wasn't right when my son's primary practitioner looked concerned as she listened to my baby boy's heart. She let me know she had heard a murmur. She was going to have another doctor take a listen and check his oxygen levels. She mentioned maybe making a three hour trip to The Children's Hospital in Minneapolis some time that weekend.
Four pulse-oximeter machines came and went from our room. I cried when I read 76. Nobody could seem to understand as he wasn't retracting, he wasn't distressed and he wasn't blue. However, it quickly went from "you may have to drive this weekend, to your child is being flown out, and the flight crew is it's way now."
It happened so fast when they arrived. They put an IV in my baby's tiny hand, strapped him down inside big isolate and took off. We left immediately after, still having no idea what, if anything, was wrong. I watched the blinking lights of the helicopter for a good fifteen minutes and when it finally left my sight I remember thinking "he will be there in about 20 minutes and I still have a two and a half hour drive" It was the most agonizing drive of my life. When they called to update they said Logan had a really rough flight. His oxygen saturation's dropped in the 30's and he at one point quit breathing. It wrecked me not being able to be there for him.
Tetralogy of Fallot was the diagnosis shortly after he landed. He will need heart surgery in the next couple days the Cardiologist said. I couldn't fathom any of it. I cried so hard I couldn't reiterate anything I was just told to my husband and mom who were in the car with me. The rest of the weekend was spent in the hospital monitoring Logan and keeping his oxygen saturation's stable.
Our four (and a HALF) year old, Emma, was able to visit most days in the hospital. If her playful and sweet personality can't make a person smile, I don't know what will.
Logan underwent his first open heart surgery on Monday 10/13/14. The surgeons began at 9:28 and he was in recovery exactly two hours later at 11:28. A shunt was placed, which was a temporary repair. 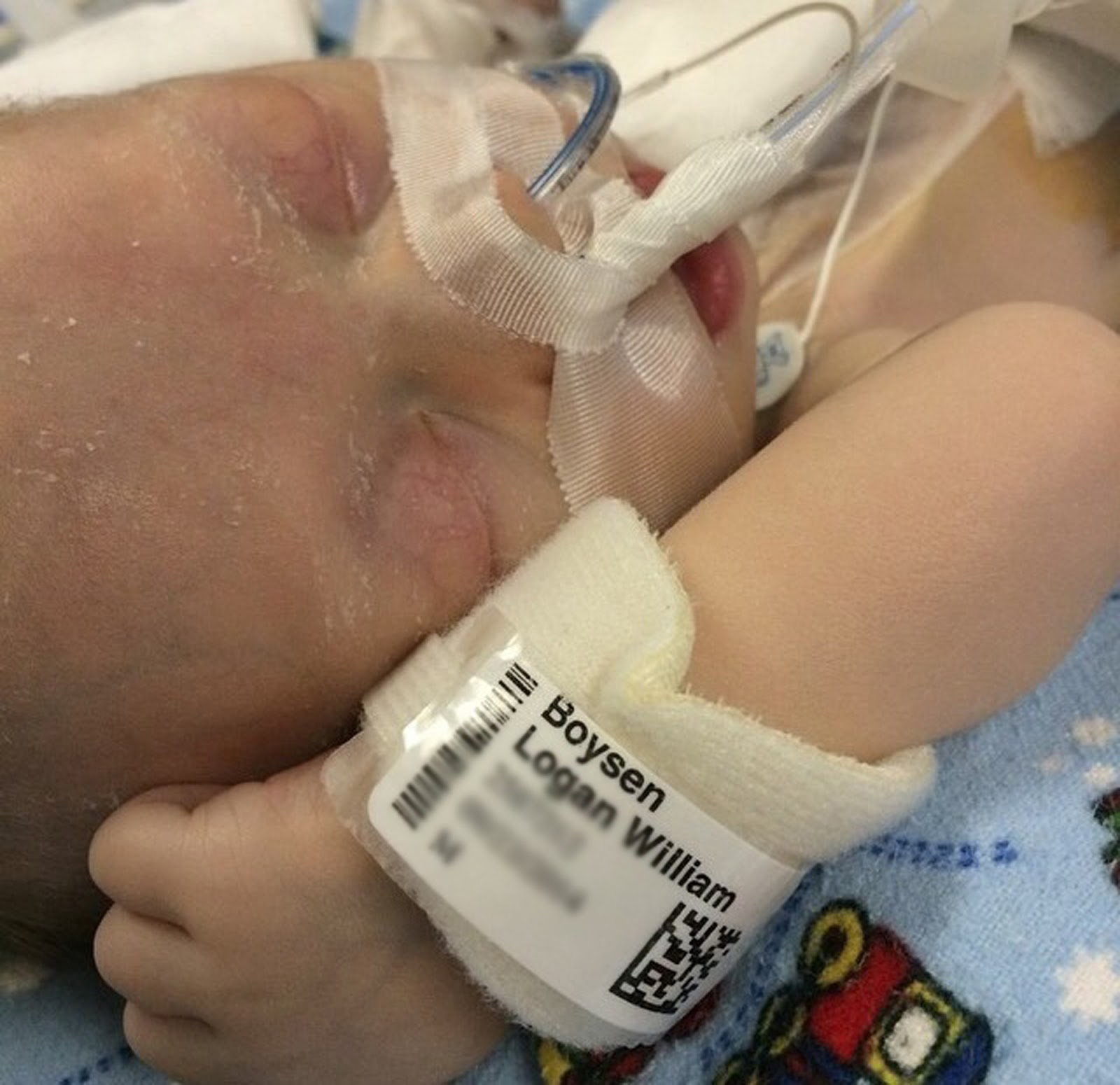 Nothing can quite prepare you for seeing your child after a surgery like that. I have never had such mixed emotions, happiness and relief he was out with no serious complications, and unexplainable heartache that he was even in this position to begin with. I hardly recognized my own baby with all of the swelling from fluid accumulation and tubes coming from his tiny body. With the help of the amazing Cardiac team at The Children's Hospital, Logan made a beautiful recovery and was home just seven days later. 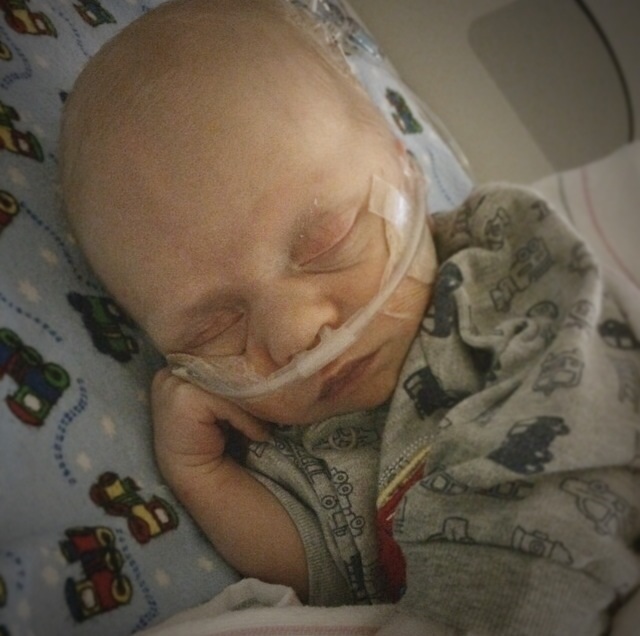 A month later and we had almost forgotten about the DiGeorge syndrome testing. When we got the call they had great news, the 22q testing was negative. Then, we received some not so great news. We were told Logan is missing a piece of his 16th chromosome that no one has ever been documented missing before. This means they have no idea how it may (or may not) affect his health and development in the future. I took this especially hard for a couple of weeks, how could they not know ANYTHING. The unknown truly IS frightening. After a trip to the Geneticist I was feeling much better as she couldn't get over how wonderful Logan is doing now. There is still fear, but it gives our family hope. 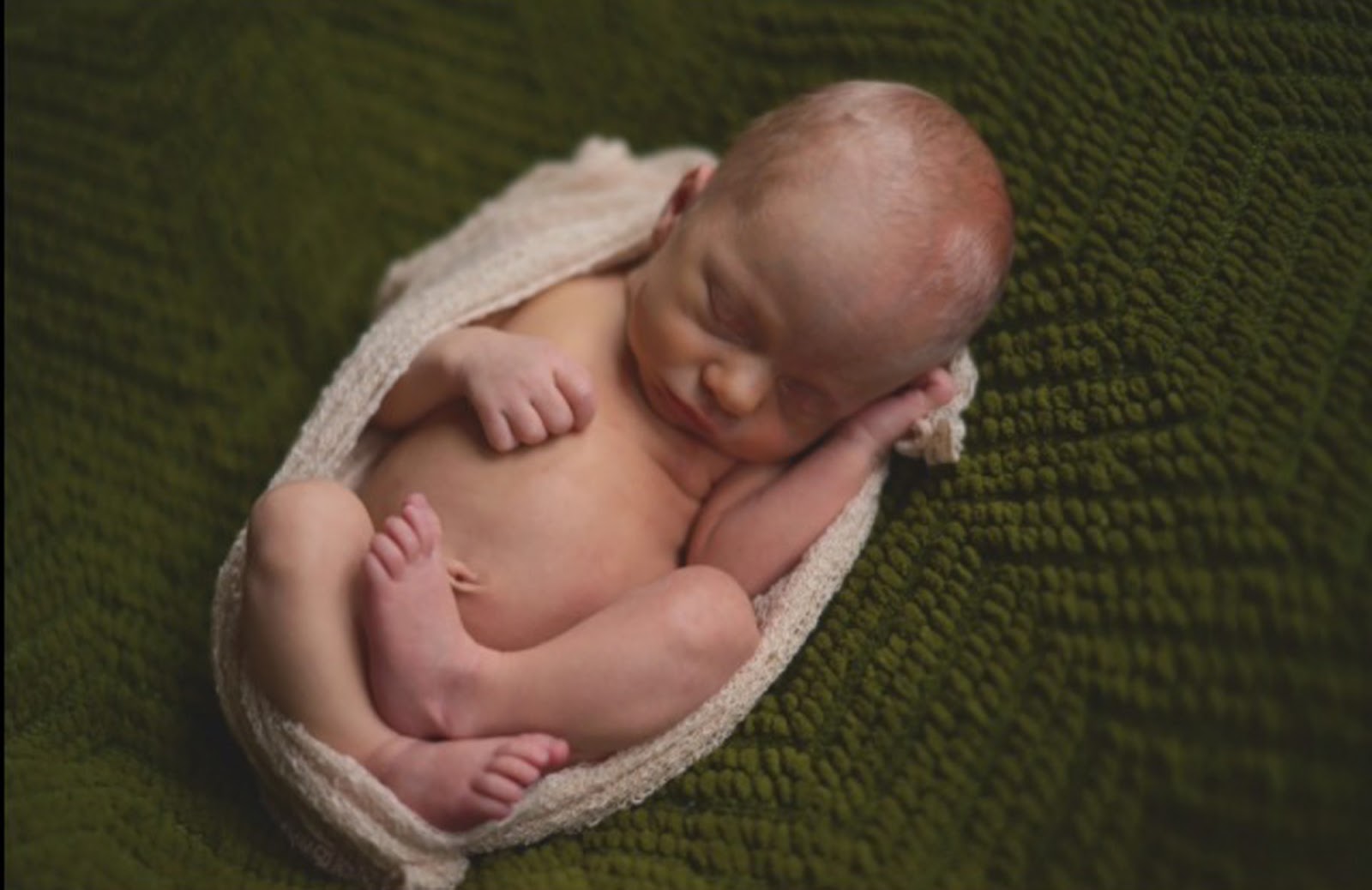 Our little miracle is now four months old and sweet as can be. We are enjoying every day with him as he grows at his own pace and hits new milestones. However, there is always concern as he outgrows his shunt that it may fail.
Logan's saturations have been dropping quite low recently and has become a concern to his team of cardiologists and surgeons. He will be going in for his second open heart surgery on February 19th for the full repair of his heart defect (that's less than a week from now!).
We are so incredibly thankful for the outpouring love and support from our family, community, and even strangers. We are extremely humbled and our hearts, too, are forever changed. We will be so happy once Logan's heart is completely repaired and healed and we can put this chapter in our lives behind us. 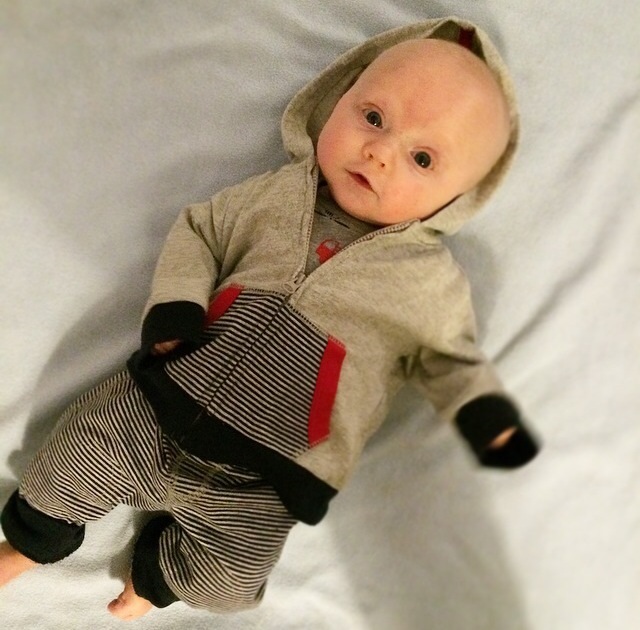 CHD awareness is so very important. Early detection is critical in order for successful treatment. The more awareness spread the more possibilities for new and improved treatment. Encourage newborn pulse oximeter tests as this can be an early indicator. I also cannot stress enough the importance of well child check-up's. I hate to think what could have happened if I didn't bring my baby boy to his two week well child check and if it weren't for our incredible family practitioner. 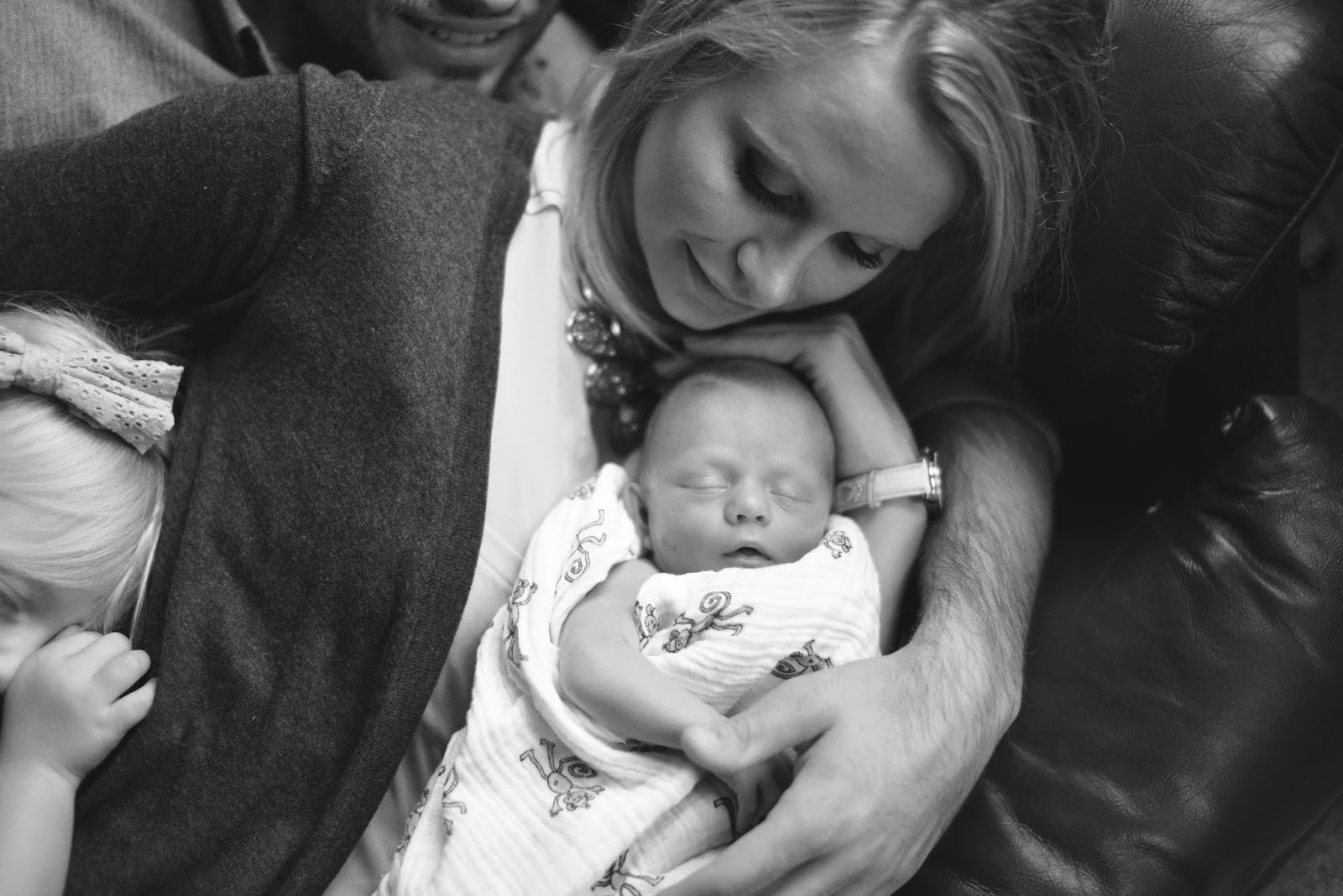 Please continue to
Lemon Squeezy Home to read about Tytan

+
The Paper Deer Photography Blog to read about Beckham
Written by Kierra Irvine
Email ThisBlogThis!Share to TwitterShare to FacebookShare to Pinterest