|| UPDATE SINCE BLOG POST || So Evanna's condition has continued to worsen over the last few hours. They're starting her on Epinephrine, putting her on nitric oxide and doing another ECHO. Even with her on 100% oxygen, her sats keep dropping below 70. Due to all of this, they're also putting another line in her so they have more access. I absolutely hate that we're not in Edmonton for safety reasons and I'm incredibly scared.

Evanna has somewhat stabled out at the moment, but we're nowhere close to being out of the woods. Two members of our ward have dropped by this evening to give Evanna a blessing, and I know everyone is praying really hard for her. I'm finally heading home to get some sleep, and I'm beyond exhausted. In the meantime I've received many comments, messages and texts - please don't feel offended if I don't get back to you tonight, but know we're grateful for the support.
I'll update everyone on Evanna's progress tomorrow. Though I started to put laundry away last night, I am NOT unpacking my Edmonton suitcase just yet.

|| EVANNA UPDATE || So Evanna is doing slightly better, but she's still incredibly sick.  She's gotten bacterial infections in the past, but this completely different (she normally responds very well to antibiotics and tweaks on the ventilator).They're best guess is some sort of chest/lung viral infection.
They've been able to wean her epinephrine and oxygen down, and they're wondering if she'll respond to nitric oxide so they can wean her oxygen even more. They still have to keep her pretty sedated and paralyze her at times to help improve her blood gases, and words like "Edmonton transfer" and "ECMO" are being thrown around. For anyone who knows what ECMO is, knows how serious and critical the situation is, and we're definitely hoping to avoid that. The other problem we're running into, is due to Evanna's unique heart anatomy, Calgary can't hook her up to ECMO, and she has to be somewhat stable for Edmonton to do it either (they have to go through her chest, and you can't do that if she were to code and your doing chest compressions). Now, we're not at that point yet, and ECMO is only used as a last resort, but I'm trying to explain the gravity of the situation.

We're having a multidisciplinary meeting at 3pm, and so hopefully we'll know more of where we want to go from here after the meeting. Last night at midnight, I contacted our primary intentivist Dr. Cave in Edmonton, and he too has talked to Calgary and is aware of situation.
Thanks for the continued prayers and messages of support. 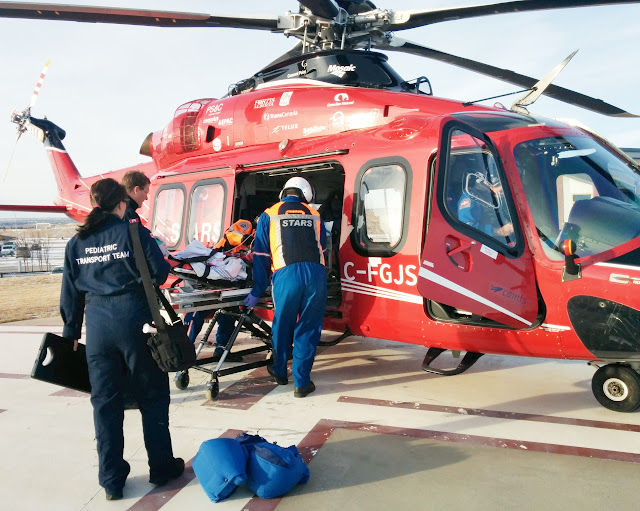 This morning during an ECHO, they had trouble viewing Evanna's valve, so they began to think she's had some sort of clot/blockage. They sent Evanna for a CT and fluoroscopy at 2pm and called the Stollery PCICU to arrange a transfer back up to Edmonton. The CT and fluoroscopy and did indeed confirm a blockage - but it is NEW, as an ECHO from a few days ago showed that the valve was working fine. They did a test, and it showed that her heparin levels were no longer within therapeutic range and were very low. They decided that not only did Evanna needed to be transferred back up to Edmonton, but that she needed to go by STARS, as regular air transport involves the airport, and Evanna needs to go directly to the Stollery.
At 4pm STARS arrived and they began to pack her up and give a report to the physician flying with her. The STARS Paramedic that is on this transfer also happens to be a coworker of Nick's, and he took our information and promised to keep us updated.

As of right now, Evanna is on her way back to Edmonton via helicopter (heavily sedated and paralyzed), and Nick and I are packing up and hitting the road to meet her at the Stollery Children's Hospital. The past 24 hours have been crazy, as they were only talking about the possibility of transferring her back to Edmonton, to now her going by helicopter. We feel a little relieved that she's going back to the Stollery - where they know her the best and have the resources to fix things.