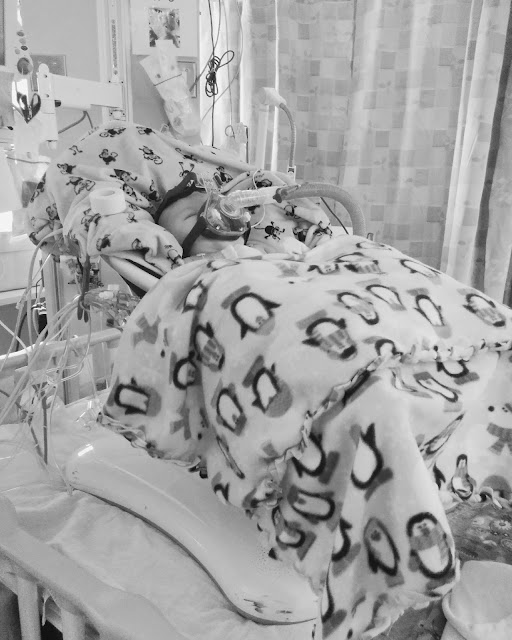 So Evanna was extubated for the 6th time this morning. Just as expected, it went well, and so far Evanna is doing well.
Evanna was originally suppose to be extubated yesterday, but after having a terrible Friday night (she destated multiple times - meaning her O2 dropped below the acceptable amount), they decided to hold off. For some reason, though Evanna had a great day Saturday, I kind of hit a breaking point. I'm not exactly that hopeful when it comes to this extubation working (along with most of the intentivists), and I just hate that we're possibly wasting time on a theory instead of moving forward with a procedure that will actually bring Evanna home. There are many things that contributed to my emotional breakdown yesterday (and the past few weeks), and so I realize that if I can't bring myself out of this "funk", I'm not afraid to seek professional help. I'm human, and we can only take so much at one time. I fully recognize that I'm not the same person I use to be at this very moment, and there are some parts of me that have surfaced that are kind of ugly. For example, I use to not mind that the PCICU is an open unit - it helped see that I'm not so alone in this journey, and if anything, it helped open the lines of communication and enabled me to meet other heart families. Now I'm hating the fact that all I see is babies coming in, and babies going out while we remain, stuck in the same place. Our journey's are not so similar anymore, and I feel like I can no longer relate to other families at the moment. My outgoing and bubbly personality has begun to fade a little bit, and I'm no longer interested in meeting other families because their child will be moved to the floor in a matter of days, which means they're on their way to being discharged home, and we're still in the ICU. For the first time, I have asked Nick to take additional time off work this week, and not because Evanna coded or is having a procedure, but because I just need him to be here for emotional support.

Last night during rounds, Dr. Ryerson was on, and she immediately knew something was wrong when she started talking to me. We ended up having a good long discussion (that of course involved tears) about this extubation, and our future in the hospital. Lately all of our attention has been focused on the respiratory issues, that we kind have forgotten about the cardiac aspect, so we need to talk to Dr. Rebeyka this week on a few issues that need to be ironed out. She hugged and comforted me for a long while and said that I NEEDED to hold Evanna before I left for the night. So though Evanna was still intubation, they were able to get a few people to help and get her into my arms for just a few hours last night. It was beautiful - Evanna was just so content, and we BOTH were just over the moon with happiness.

This morning I came in bright an early, because Dr. Duff said he would like to extubate Evanna before rounds. So at 8:30am, Evanna was extubated onto BiPAP again, and now we just have to see how it goes. This time we're going to be mindful of how much pressure she is on, and try not to over ventilate her, but at the same time, not wait as long to accept a failed extubation when she's showing us signs. Obviously there is a chance that she could succeed, but it's up to Evanna and her body to decide what it wants to do, and that's all there is to it.

Thanks for your continued support,