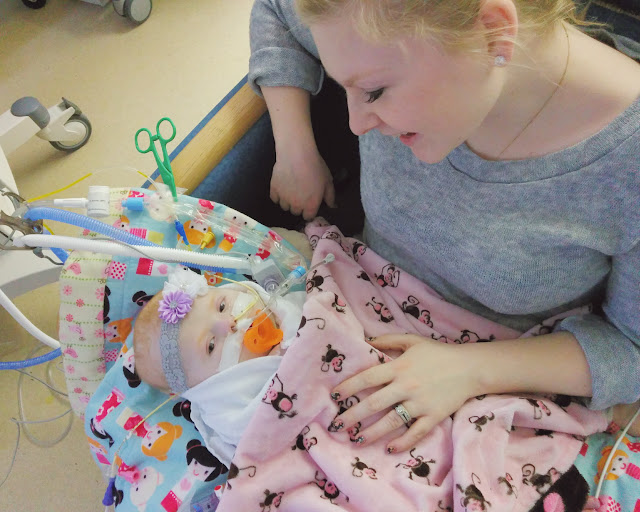 It's been a relatively good week, and the intentivists are happy with Evanna's progress. She's still intubated, but they're basically conditioning her so she'll hopefully extubate successfully.

On Thursday they took out her two chest drainage tube's (the JP's for all my medical friends), and completely turned off the epinephrine (it's an adrenaline drug that helps your heart pump). They have continued to come down on her sedation, and she is almost back on the same levels she was on going into surgery. Evanna did get another fever, so they started her on some antibiotics again HOWEVER, they've been able to leave her ventilator settings alone. Usually when Evanna gets sick, they have to increase her ventilator settings and go up on everything, but they've still been able to make some decreases - small ones, but they're still decreases! 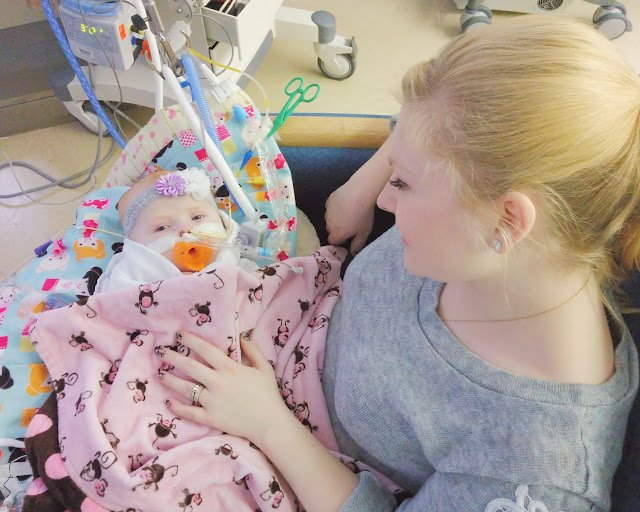 This morning they took out her pacing wires as they've never had to use them, so there was no point to keeping them in (these were put in during surgery and were there just as a precaution). They also took out her central line today, as she's not on that many IV medications anymore, and still have IV access through her PICC line. Yesterday Evanna was on just on a PEEP of 7 and pressure support of 6. They turned the rate completely off, however last night with both her fever and very little ventilator support, she started to get very tired (and her lactate started to climb), so they increased her ventilator settings to give her a break. This was completely fine with me, as the whole point of conditioning is to just do periods of decreasing, and then let her have a break (just like going to the gym!).

There is also something I wanted to share with everyone that is new to us, and will effect Evanna and her care, even after we bring her home. From my last post, I mentioned that Evanna had a mechanical valve placed in her conduit. At the time, I really had no idea what that entailed, and it wasn't really explained to me until it was already in place. When Evanna originally went into surgery, we had only talked about a pig valve being put in, however, a mechanical valve was put in instead. There are both pros and cons to this, but the cons just caught me a little off guard. The pros is that in the in the long run, mechanical valves are much better, as they don't break down and they last a very long time. However the downside is Evanna will now require daily heparin shots. At the moment Evanna gets two needles everyday, but there is another drug that only has to be given once a day, so we're hoping to switch to that as soon as possible (probably when we're closer to being discharged). Still, it wasn't something that was initially explained to me, so it caught me by surprised when I came into the PCICU the other day, and Evanna was being given a needle - and it wasn't your normal vaccination. Don't get me wrong, it's not like we would have said no to the mechanical valve - it's what's best for Evanna in the long run, but it's just a little stab to the heart when I start to picture what our life is going to look like when we bring her home. It's mind blowing that the only medication Evanna was on before surgery was a little bit of Omeprazole for some reflux, and I can't even begin to imagine what drugs she'll be on when we bring her home.
Dr. Cave did say there is another way to administer the heparin by inserting something under her skin once week, so we don't have to poke her everyday, but that's still a lot of pokes for one little girl. Eventually, when Evanna is older, she may be able to go on Warfarin (which can be taken orally), but they generally don't like to put small kids on it, as they're prone to fall down and hurt themselves more easily, and there's a higher risk for uncontrolled bleeding. Dr. Cave said he's extremely sorry that what's involved with a mechanical valve wasn't really initially explained to us, and that I was caught by surprise. I told him that it's not like we would have said no to the mechanical valve, as it IS better for Evanna, I just didn't think a mechanical valve equals daily needles for Evanna. Nick has already joked that I'm going to be the one that has to give her all her shots, as he wants me to be the mean parent lol. 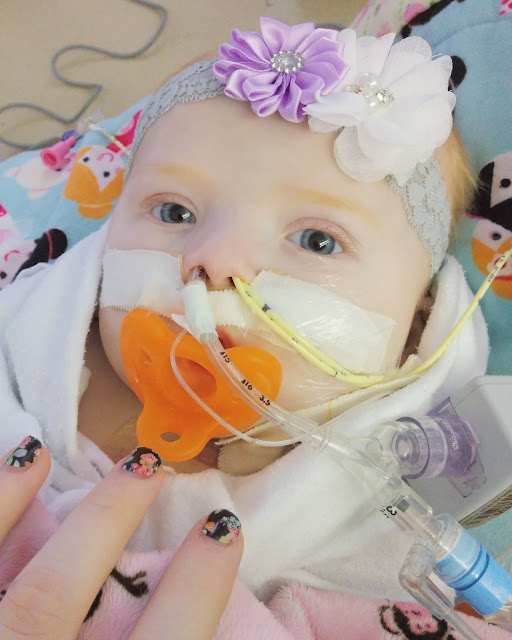 The plan for the week is to continue to slowly decrease her PEEP and pressure support over the next few days, and hopefully try extubating later this week. While they're a tad more optimistic that she'll be successful, we're still not out of the woods and have to keep our fingers crossed. We are discussing when we'll be transferred back to Calgary, but no set plans have been made just yet.

I'm excited for this upcoming weekend, as I'm making a quick trip back to Calgary for about 40 hours, as I'm a bridesmaid in a friends wedding. I haven't slept in my bed for almost 80 days, so it'll be a nice and welcomed break from the hospital. Nick is coming with me to make a date out of it, and his mom is coming up to Edmonton to be with Evanna while we're away.

Thanks for the continued support and prayers. We've gotten a couple of generous and beautiful care packages over the last few weeks, and the kindness of both friends and strangers is unbelievable. We have been so incredibly blessed with such kind and caring people in our lives, and I hope to one day return the favour. I also need to give a little shout out to Nick's awesome supervisor (hi Wade!!), for being so understanding and taking care of our family. Nick still works as often as he can, but there have been times when I needed him here in Edmonton (Evanna's bigger surgeries and when she coded back in October) to be with me and Evanna. When I posted about Evanna's second open heart surgery about 2 weeks ago, Wade quickly sent Nick a text asking him if needed that day off before Nick got a chance to call him and ask Wade himself. Nick is surrounded by so many caring coworkers who have taken a great interest in our daughters well-being, and I will be forever grateful.