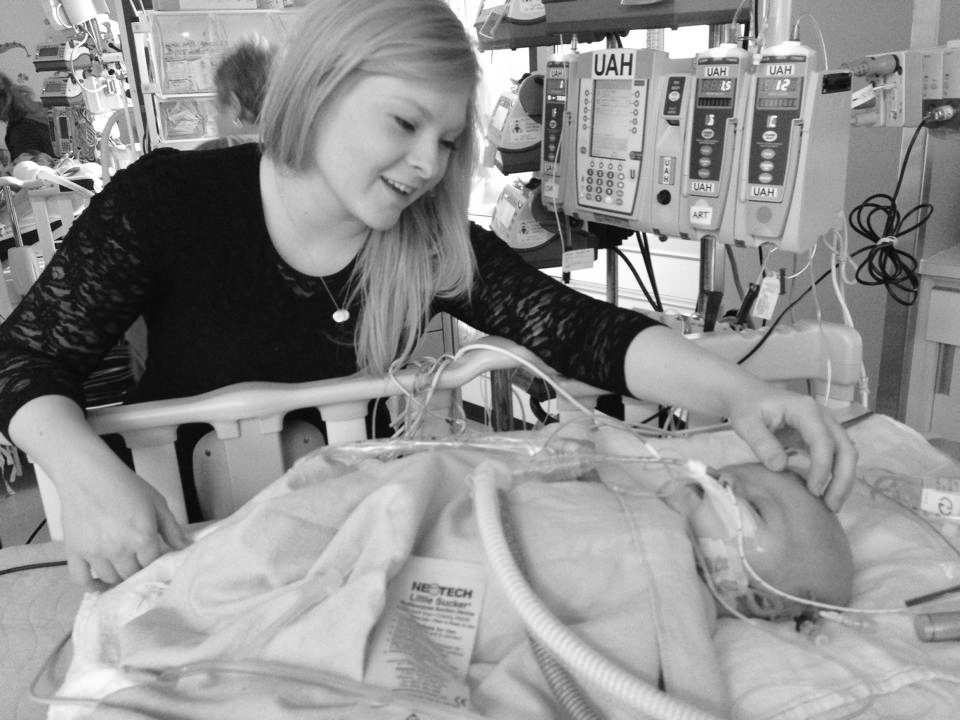 So the bronchoscopy was originally suppose to happen Friday night, but it ended up being bumped to Saturday morning. This was fine because I would rather the ENT specialist be of fresh mind when he went to perform the procedure, then be tired and try his best to do her as fast as he could so he could go home. On Saturday morning when I came in, Evanna was wide away and just going to town on her soother. She has also remembered that she has legs and likes to use them to let me know that she is not a happy camper. I just know she's trying to tell me that she's not down with this laying down business and wants to sit up. Poor baby girl.

So around 10am they came and took her down to the OR. Dr. El-Hakim (the ENT specialist) came out and asked if Evanna had had FISH testing done, I said stated that she did, and she has 22q11 (DiGeorge Syndrome) and that it should be in her file. He said that makes a little more sense and now he has a better idea of what to look for.
It was a long procedure (well it felt like it took a long time!), and Dr. El-Hakim had some answers. He said Evanna has tracheomalacia and is pretty sure that's what's causing her extubation problems. What it means (and I'm only describing it the best way I understand) is that her trachea is smaller than normal. Basically when someone gets intubated, it always causes a little bit of swelling, so swelling plus a small/weak trachea means for an extremely hard time breathing on your own. They still want to do a CT Scan/Angiogram to make sure there are no other issues causing further problems, but it seems like they have the general answer.

So what does this mean? Well it just means the extubation process will be very slow and take some time. They first inserted a smaller intubation tube and start her on some steroid drops. This plus some rest and mild sedation (so she doesn't move too much, making the swelling worse), will enable them to extubate her. However, she will first have to be extubated to a BiPAP machine for a little bit, so she still has lots of support. Then eventually they can downgrade her to a CPAP machine, and finally high flow cannulas. This whole process can take weeks, so we are looking at about another MONTH in the hospital (cue tears here). I have talked to the intentivists and a heart mom friend, and once Evanna is completely stable from a heart standpoint, I’ll push for a transfer back to Calgary. Thankfully my heart friend gave me a tip and told me to involve Dr. Fruitman (our cardiologist) to help push it and make that process go quicker.

This news was definitely a little hard on me, and I'm still processing it. It's so physically and emotionally exhausting being in a hospital for this length of time and the thought of another month was a hard pill to swallow. I know we'll get through it. However because of this, I'm going to be very pushy in getting Evanna transferred back to Calgary as soon as possible. The PICU there is so much bigger and roomier, and not only will it allow me to go home as often as I please, but to also stay overnight and have my own space in Evanna’s private room. The PCICU up here in Edmonton is very squishy with multiple beds cramped into one room with very minimal space for us parents to be with our child.

Today Evanna finally had her last drainage tube pulled (yeah!!), so at least something happy happened. Again, they didn't give her any extra painkillers, and she barely flinched when he pulled it out. They still want to do a CT, and it was suppose to happen this morning, but just like everything else, it's getting bumped to tomorrow. My fingers are crossed for no more surprises, but I'll update when I know more.