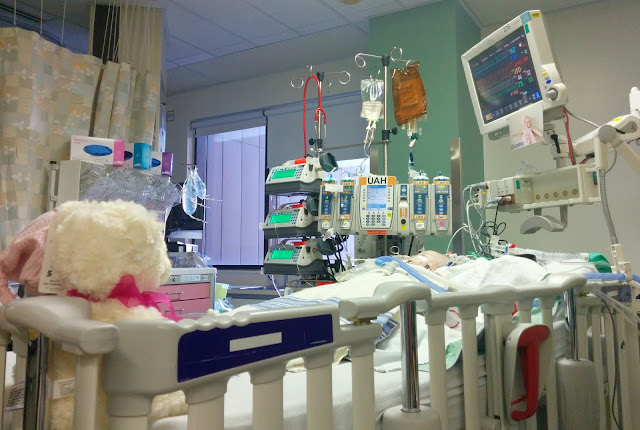 I had a tough night last night. Generally I've been very positive and upbeat, but a few things got to me and I couldn't stop the tear works. When I left the hospital at 10pm, they were very unsure if they were going to be able to close her chest and I was devastated. I ended up calling a heart mom friend in Calgary who's little girl has also gone through a lot, so I knew she would understand my frustration. Plus I knew she would have some insight and guidance that she could share to help me see the "bigger picture". I then went back to the Ronald McDonald and talk over my frustrations with Nick and eventually went to bed. I think another reason why I was upset is I'm slowly getting sick of just looking at her. It's been days since I've been able to hold her (let alone touch her very much), and I know it's going to be a few more days before I can.

This morning they called us just as we were leaving the Ronald McDonald to say that during cardiac rounds they decided they will indeed close her today. The hospital usually only calls when something bad is happening, but I had asked them to call me if they decided they were going to close her after all. When we got there she was having a mini episode, but after they administered a few pain meds, she calmed back down. They joked that because she's a red head, that she requires more sedation. Apparently there's a study that shows that redheads require 20% more anaesthetic because they burn through it faster.

At 1pm they came to take her into the OR and allowed us to walk with her to the doors. We said our goodbyes and saw her off. Just before 2:30pm, Dr. Rebeyka came out and said that though it was a tight fit (due to the large conduit), the closure went well. They ran a few tests, and he's happy with the blood flow to the lungs.
Next step is recovery. She will probably get a little sick again, so the next 24-48hrs will be rough, but we know she's a little fighter!