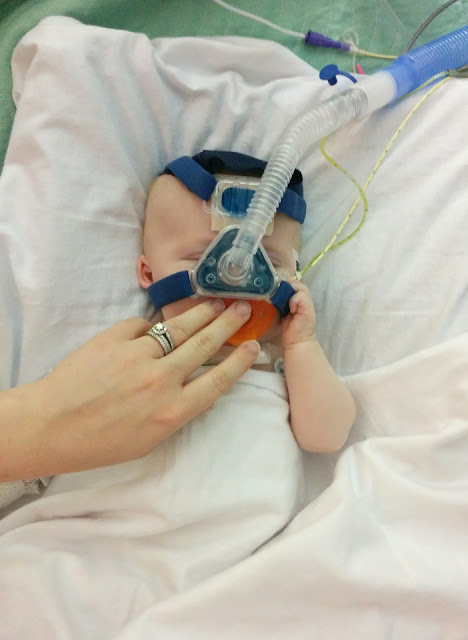 On Saturday morning, I came in and was told that Evanna had an excellent night. Her chest (particularly the right lung), continues to look better, and the little rash that developed under her chin this past week has begun to clear up nicely. They also took out her left femoral line, which leaves Evanna with only two IV lines in her now (the PICC line in her right arm and the arterial line in her right leg/groin area). Dr. Duff decided to lower her BiPAP settings and she handled it like a pro. I held her again, and within minutes she was fast asleep into a deep slumber. So deep, that he oxygen levels started to drop a little, but after I repositioned her, it quickly jumped back up again. Later in the evening Dr. Duff came by again and decided to not wait until Monday, and switched her to CPAP. She did really well, and I just loved how much quieter our little corner of the unit became.

This morning I came in a little later (Sunday mornings tend to be really slow around here, so I take my time getting to the hospital), and found out they had just switched her back to BiPAP. While she had a really good night, her little body was really tired and was having a hard time breathing again. So they switched her back and letting her lungs, airway and diaphragm rest a little bit.
Around lunch time they finally took out the stitches in her chest and did another dressing change. Throughout the day, whenever Evanna was awake, I would sit her up until she's to tired. I'm trying to help her lungs drop and regain her strength, plus I know she likes the position change and looking around a little bit (though she's still a little drugged up, so it's hard for her to concentrate on anything).

The plan is to let her rest for the day, bring down the BiPAP settings and call the Children's hospital in Calgary tomorrow to begin the transfer process (my nagging is working like a charm! lol)