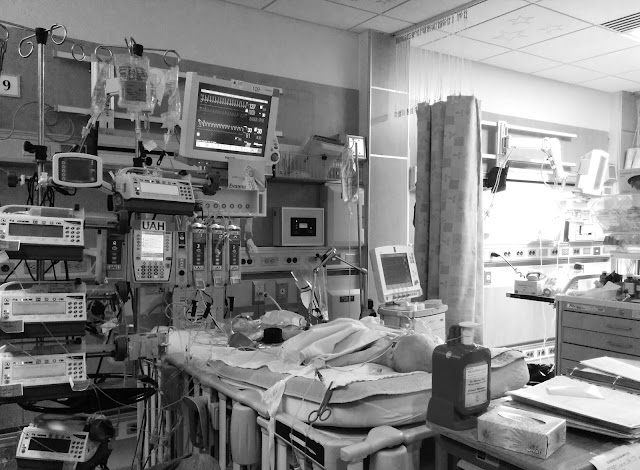 She's stable now, but we're now dealing with some set backs and she had to be reintubated.

Evanna had been extremely stable all day long on Monday. I came in around 8:30am, and she had been apparently a little grumpy for the last little while. She soon dozed off, and pretty much slept the whole day. They decided that because her femoral artery line wasn't working anymore, to just take it out, and to discontinue all the blood work. They also discontinued some of the IV meds she was on and convert them to oral ones. They called Calgary and other then a test on the transfer BiPAP, all systems were a go for a transfer later this week.
I got a good afternoon cuddle in and held her for almost 3 hrs. After supper I came back, and ended up staying until about 10:30pm because I was having a good conversation with Evanna's nurse. I went back to the Ronald McDonald House, and after catching up with some things on the computer I finally went to bed. At 12:50am, my phone rang. The nurse on the phone said that Evanna had coded and that Dr. Aditia needed me to come right away to the hospital. I had her repeat what she had just said, because it took me a minute to register what she was actually trying to tell me.
I jumped out of bed, and for some reason I was having a hard time pulling myself together to put some clothes on. After I changing, I drove as quickly as I could to the Stollery. While driving, I called Nick (who was currently working back in Calgary), to tell him what had happened. I parked in Emergency and ran like hell to the PICU. When I got there, there was initially about 40 people standing in and around her bed. Dr. Aditia was trying to intubate Evanna, and a nurse (later found out her name was Andrea) was doing chest compressions. I stood in complete shock. I heard someone say that the ECMO team was on standby and it was ready to go (at this point Nick decided to leave work and head to Edmonton immediately). Evanna's nurse (Megan) came over with tears in her eyes and held my hand while watching them work on her.
Finally the nurse that was doing chest compressions stated that she had a heart beat and that it was strong (which allowed me to breath a small sigh of relief). They got her somewhat intubated and starting putting some lines back into her. They kept telling me that every time they pulled blood gases, the results kept getting better and better, so that was very reassuring. They ended up calling in a special pediatric anaesthesiologist to come intubate her with a bigger tube that would fit her better (it ended up being the same anaesthesiologist that she had back in July when she had her Cath), and he raced over to the hospital to do it. Slowly as things calmed down, the crowd around her bed dispersed. A few nurses were around to continuously draw up sedation and paralysing medications, and mix up IV medications for the pumps. They decided to cool her body a little bit (they kept the range between 33-35°C) to help her body recover a little bit, and just let her little body rest for a little bit.

Nurses were constantly coming up to me to see if there was anything I needed. I was given a warm blanket, water and juice whenever I asked, and one of the residents (Gabriela) that I was very familiar with, came over often to keep me informed on what was happening. The whole ordeal was very surreal, and at moments - time seemed to freeze or go slowly, and at other times, things happened extremely fast.
The space was cleared up (particularly the ECMO pump was taken away) and they offered me one of the parent rooms to crash in. I laid down in there for about 30 minutes before I got a text from Nick saying that he was here. I met him in the hallway and showed him to Evanna's bed. Nick was definitely a little worse for wear and quite speechless. After some time, we eventually left for the Ronald McDonald House to get some sleep, as we were both emotionally and physically exhausted and in a much needed break from the hospital.

This morning I finally made my way to the hospital just before 11am (though I did call the unit twice earlier this morning to check up on her, but both times they said she was stable), and rounds had just left. They still don't have an exact rhyme or reason as to why this happened, but definitely leaning on the respiratory side. Some guesses is that either she had a build up of secretions that didn't clear causing a blockage in the airway or that she experienced a laryngospasm.
They're doing an ECHO and Ultrasound of her head this afternoon just as a precaution and make sure everything looks good, as well as have ENT come and take a look at her.

Overall, we're still waiting for some answers, and once we have answers, hopefully a NEW plan towards getting home will be created. This is definitely a HUGE step back and big blow, but at the same time we realise it could have been a lot worse (so we've been told), and she was in the best place possible for this to happen (an ICU at the Stollery). We were so close to coming home and had everything set up for a Thursday transfer to Calgary, so I'm definitely a little heartbroken. They said she stabled very quickly, and are just keeping a close eye on her.

Like always, lots of prayers are needed at this time.