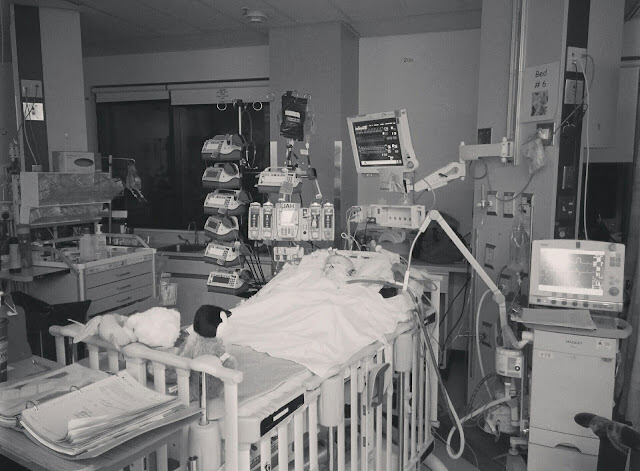 My impatience was starting to get the better of me and I was so disappointed when we arrived to the PCICU Tuesday morning. Evanna was still going through withdrawal and looked absolutely miserable. They had taken out her catheter (so that's another tube gone....), but they were starting to wonder why her right upper lobe was still collapsed. They did an xray, and after that, decided to do a bronchoscopy to see if anything was blocking it. It was a long day, full of lots of emotions with many ups and downs (but with more downs), and I was still frustrated with the fact that Evanna was still intubated and mad that she was this way because of all the drugs they had pushed into her.
The bronchoscopy was done in the evening, and the results came back saying that there was nothing blocking the bronchi, so it was probably just secretions keeping her lobe collapsed. They decided to continue with the plan of extubation for Wednesday and continuing lowering her sedation medications in preparation of that. Just a few hours before we left, Evanna began to open her eyes and look at us. She was still drowsy, but making decent eye contact with Nick and I.

Today we came in with the plan of an afternoon extubation. She was calm all day long and keeping awesome blood pressures and oxygen saturations. She would wake up here and there and look at us. I was so positive that she would extubate with minimal problems and we would finally get a glimpse of our little girl.
At 4:30pm they began the process to extubate, and for a little bit it looked like she was handling it okay. She was having a little trouble taking nice deep breaths, but this time she was awake. They tried a little epineb to help open her lungs, but as the minutes passed by, she began to look more and more pale, and more and more tired. They ran a blood gas, and it came back with really high CO2, so they called it and decided that they had to reintubate again.
Our hearts were just crushed and we were absolutely devastated. She was so close, and nothing was adding up or making sense.

She is now sleeping and they're going to do an ultrasound tomorrow (one of the surgeons even mentioned a CT) to see if there's a problem with her diaphragm. Dr. Cave was just as disappointed as we were, and promised that he was going to find out what's going on and get Evanna back to her old self.

It's been a very hard couple of days, and I can't even begin to explain how difficult this has been for us. I'm at a point where I don't know what to do anymore and I'm getting extremely frustrated. I thought by now we would be out of the PCICU and Evanna would be close to going home. I know we'll get there, but it's getting harder and harder to envision.